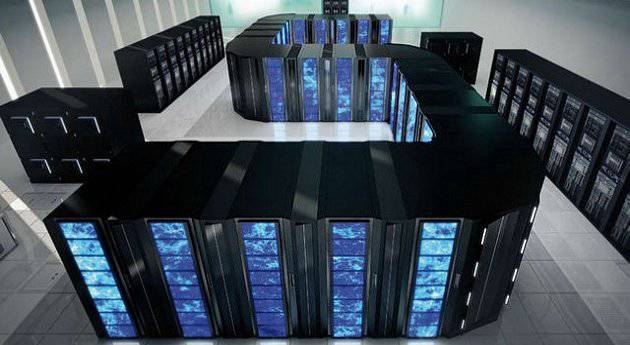 For the first time in stories Russian supercomputer manufacturer shipped its product to the USA. T-Platforms won a tender for the supply of a high-performance T-Blade V-Class system to the University of New York State University of Stony Brook, hereinafter referred to as SBU. Historically, supercomputers originated in the United States, and so far most of them are manufactured and used in America. To assess the significance of the event, it remains to add that during a raid on a foreign territory, the domestic company left such famous IT corporations as HP and Dell behind.

The best-known use of high-performance computing systems is the creation of nuclear and rocket weapons. Therefore, countries that can make supercomputers get a pass to the elite club. But to maintain the country's prestige in this way is not easy: the more powerful the computing system, the more difficult it is to design it, despite the use of standard components.

In the modern world, supercomputers are used not only in military affairs, but also in industry (for designing and calculating the properties of structures), as well as in business and science. Mathematical modeling is widely used in all natural sciences. The availability of supercomputers has made it possible to calculate the necessary structure of new substances to obtain given properties, as well as the processes occurring at the atomic level, and even visualize them, helping scientists to understand the mechanisms of reactions. It is in the creation of new substances and materials that the Russian T-Blade will participate.

The international fight for supercomputer prestige entered the public space in 1993, when the rating of the most productive top-500 supercomputers appeared, in which the devices were ranked according to the speed of the Linpack test. The results of this test can not always be directly applied to the speed of calculations in specific tasks, but as an arbitrator, he arranged everything, thanks to which he will celebrate his twentieth anniversary next year. Historically, most of the list is occupied by systems installed and manufactured in the United States. Even now, when the creation of supercomputers was simplified, the American systems for June 2012 of the year occupied half (252) positions in the top 500. It should be noted that many systems in the rating belong to other countries, but were created by American companies - HP, IBM, etc. So the top 500 reflects not only the level of development of supercomputer equipment in the country, but also interest in it: those who do not can produce a supercomputer, spend money to buy it.

The dynamics of the rankings show that China's IT industry is actively developing: since June 2010, it has been holding the second place in the number of high-performance systems. Usually they are created on standard components, including processors manufactured by American companies - IBM, Intel and AMD. But in 2011, the first supercomputer on Chinese processors appeared in the top 500. Another country with unique technologies in this area is Japan. There, the production of processors has long been mastered, and the system based on Fujitsu chips now occupies the second place in the rating. And although by the number of positions in the top 500, the Japanese now occupy only the third place, their computing systems used to periodically occupy the first line (the most powerful Japanese supercomputers use to simulate earthquakes). Western European countries are periodically selected to the first positions in the list, but only with the help of purchased systems.

Against the background of European countries, Russia looks good. The first supercomputers in Russia were purchased. However, at the beginning of the XXI century, production of its own was set up, and now, out of five machines belonging to the top 500, two were produced in Russia. By the number of systems and their total performance, Russia ranks tenth in the ranking. Note that the best of the systems installed in our country, Russian-made - Lomonosov supercomputer - takes 22-th place in the “Table of Ranks”, and at the time of its creation climbed to the high 12 line.

In Russia, the creation of supercomputers involved in two companies: "T-Platforms" and RSK-SKIF. Most of the T-Platforms public projects are implemented in universities, where they not only carry out research, but also solve applied problems for enterprises, and also train specialists working on supercomputers. Of the deliveries to industrial companies, one can mention projects with the Sukhoi Design Bureau, Rusal and the St. Petersburg Central Research Institute named after Academician A. N. Krylov. T-Platforms sell their systems not only in our country, but also abroad. After the launch of the 12 TFlops system for Tomsk State University, which became 72 in the list of supercomputers, the company was noticed by foreign partners, and since then it has sold several systems to Europe and Singapore.

RSC Group of Companies specializes in the creation, implementation and support of supercomputers in Russia. Its fastest computing system "SKIF-Aurora" takes 185-place in the top-500 and installed in South Ural State University. The creation of supercomputers RSK-SKIF began in cooperation with the Italian company Eurotech and the Institute of Program Systems of the Russian Academy of Sciences named after A. Aylamazyan. In particular, thanks to this partnership, its systems are characterized by water cooling, which improves energy efficiency (speed per unit of energy expended) and allows you to create low-noise supercomputers. Due to this, the RAC system is higher than the Russian competitor in the list of the most eco-friendly Green500 supercomputers. Interestingly, a commercial scheme for the use of computing power was implemented at SUSU - they were leased to the military. Another famous university that received the RSK supercomputer was MIPT near Moscow. The RNC system with 35 TFlops power is also installed in Rosgidromet, which made it possible to improve the accuracy of the weather forecast.

The current sale in the United States was preceded by the experience of selling T-Platform products in Europe and Asia. The company even takes part in a project at the EU level. Within the framework of the PRACE RI initiative, a pan-European network is being created, uniting supercomputers. T-Platforms will participate in it by supplying equipment that will be included in the system by the partners of a Russian company - the Finnish supercomputer center IT Center for Science, the Swiss national supercomputer center CSCS and the Dutch National Center for High Performance Computing and Information Technology SARA. According to representatives of the domestic company, they took part in the project PRACE RI not for profit, but to gain experience of cooperation with leading European companies in the field of creating supercomputers and software for them. 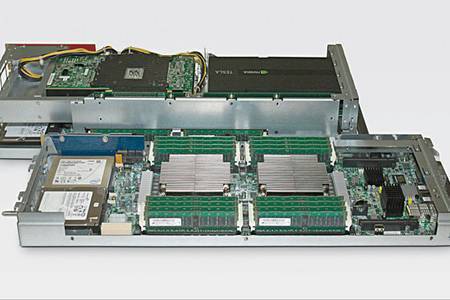 This is the high-performance T-BLADE system module.

In the tender for the American University, Stony Brooks had to put a small supercomputer. The competition was held in several stages and included a preliminary demonstration of the solution, testing and selection of the winner. According to the Russian company, the T-Platform solution surpassed Dell’s decision on a number of customer-specified characteristics: peak performance, number of processor cores, case form factor, number of power supplies, etc. In contrast to HP, the domestic manufacturer was able to include the integration of the supercomputer into the SBU infrastructure and the optimization of the software and hardware part taking into account the specifics of scientific research.

Vladimir Voevodin, Corresponding Member of the Russian Academy of Sciences, Deputy Director of the Research Center of the Moscow State University, explains the reason for the victory of a Russian company in a foreign territory by the activity of compatriots: “T-Platforms is a small, but energetic and exceptionally competent team that allows them to implement advanced solutions of the world. " Let us explain which of the solutions helped our compatriots.

In the case of delivery in the US, this is a small system by the standards of high-performance computing. It contains 10 compute nodes based on AMD Opteron 6238 processors (each has 12 cores) and one control node redistributing the load between the servers via the high-speed QDR Infiniband bus. All of these modules managed to fit into a rack enclosure height 5U (1U = 4,4 cm - the height of a standard rack server). This became possible due to the fact that the Russian company itself develops boards, power supplies and even cooling systems. When compaction is required, a board design is created with the densest possible placement of elements. The choice of AMD processors allowed to reduce the cost of the system, and hence the final price for the customer.

The T-Blade V-Class compact supercomputer sold in the USA was equipped with the CentOS operating system and the VASP software package designed to model the molecular structure using quantum molecular dynamics methods. The estimated speed of the Russian supercomputer was 2,5 Tflops, and the real, according to the Linpack test, is more than 80% of the peak system performance. In addition, the T-Platform specialist fine-tuned the system and the VASP package, which accelerated work with him on the T-Blade V-Class by another 27%.

Summarizing, it can be noted that the T-Platforms, upon delivery, fine-tuned both the hardware and software, which, apparently, had a positive effect on the test results. Now the founder and CEO of T-Platform, Vsevolod Opanasenko, hopes to continue expanding to the USA: “This is our first delivery to America, and we are very pleased that we can compete with world vendors not only in Russia and Europe, but also on their“ home ” "Territory. For us, this delivery is very important, and, based on it, we hope to build on our success in the American market. ”

Why SBU is our supercomputer

The main user of the new computing system at SBU will be the laboratory of Artyom Oganov (The Oganov Lab), born and received a master's degree in our country. Perhaps this facilitated the negotiations. Oganov's laboratory is developing new materials using the Universal Universal Predictor: Evolutionary Xtallography's own “evolutionary” method: the program goes through random variants of molecular structures from which the most appropriate are selected. Child configurations are made from them - and so on until a material with the desired properties is obtained. In contrast to the usual method, which takes into account the interaction of all atoms, the Oganov method requires significantly less computational power to achieve the final result, so around 900 scientists use it around the world. (It is interesting that the abbreviation of the method name in Russian can be read as “success”.)
At the moment, a carbon compound similar in hardness to diamond is obtained by the USPEX method; the configuration in which methane is on planet Neptune; new modifications of sodium, boron ions and iron sulfide have been discovered. The Russian computing complex will help create new superhard materials and substances with special electrical and optical properties, as well as lithium compounds for the production of ultracapacitors and batteries.