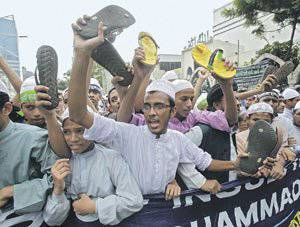 The US-based and widespread on the Internet amateur film “The Innocence of Muslims”, which touches the religious feelings of the representatives of this denomination and shows the Prophet Mohammed in an offensive light, served as a direct pretext and as if a detonator for large-scale protests against Americans and their institutions abroad. We can agree with the opinion of the First Deputy Chairman of the Council of Muftis of Russia, a member of the Public Chamber Damir Gizatullin, who noted in his interview that “when freedom of speech leads to violence, to the killing of innocent people, this is no longer freedom of speech and democracy, but an attempt to stir up interethnic or inter-religious conflict, provocation, and it should be limited. "

Crowds of angry Islamists in a number of Arab and Muslim countries are attacking US embassies, burning their flags, cars, smashing buildings. Mass protests took place in Morocco, Libya, Lebanon, Tunisia, Egypt, Yemen, Sudan, Indonesia, Bangladesh, Afghanistan, Australia, Iran. In the streets of the Iraqi capital Baghdad, many thousands of demonstrators of the radical imam-Shiite Muqtada al-Sadr took place. He made a statement in which he demanded that the Iraqi authorities prohibit Americans from entering the country and called on parliament to vote for a law that would prohibit Iraq from having relations with countries in which the Prophet Mohammed and Islam are offended.

The most tragic events unfolded in Libya, where the US ambassador and three other embassy personnel were killed. Russia, like other countries, condemned this act of vandalism and expressed its condolences over the death of diplomats. Washington did not rule out that all attacks and manifestations threatening the United States and the Western world over the past three days are part of a single, pre-planned and well-coordinated action organized by the Islamic terrorist groups Ansar al-Sharia and Al-Qaida ". Islamists could coincide with their speeches on the anniversary of the 11 attacks of September 2001 in the United States and at the same time take revenge for the elimination of one of the leaders of Al-Qaida in Yemen, Said al-Shikhri. According to experts, the most powerful branch of this terrorist group is operating in this country.

US Secretary of State Hillary Clinton commented on the appearance of the film “The Innocence of Muslims” about the Prophet Mohammed. According to Clinton, the US government "has absolutely nothing to do with" the production of this picture, which the Secretary of State called "disgusting" and "reprehensible." “It seems that its creators pursued a very cynical goal - to blacken the great religion and kindle enmity,” added Clinton.

The Israeli leadership must also be given its due, which in a rather tough form dissociated itself from any connection of Israel with this provocation and condemned the filmmakers, who, like the terrorists, cannot be classified and characterized according to national or religious grounds.

FROM CONDEMNATION TO PREVENTIVE MEASURES

Of course, the condemnation of such provocations by the official authorities of the United States, Israel and several other countries is very important. However, Mrs. Clinton was silent about the actions or inaction of the American authorities in connection with the release of this “explosive” film.

Considering that the notorious film was created not yesterday, but more than a year ago, about a hundred people took part in its production, the American authorities had enough time to study its content, evaluate the possible negative consequences of its replication or posting on the Internet and accept appropriate measures. American taxpayers pay billions of dollars in support of the FBI, CIA, other intelligence and analytical services. However, like 11 September 2001, these services demonstrate the inability to prevent provocations by American “free citizens” or foreigners living in the US (it does not matter whether they are by nationality or religion: Arabs, people from Africa, Middle East, Jews Jews or Coptic Christians). By localizing one or two radical extremists, provocateurs, or mentally ill people, one could have avoided a wave of anti-American and anti-Western campaigns around the world, human casualties and destruction. Washington would not have to send to the shores of Libya and the US Navy ships with marines on board.

The world community and the so-called “ostrich” position of the United Nations on this issue cannot alarm us. According to media reports, the UN Security Council condemned only a series of attacks on the diplomatic missions and premises of the US and other Western countries, which swept across the world. However, the appearance of the most scandalous film, which provoked these attacks, the UN Security Council did not react. On the eve of September, 13, this authoritative international body made a similar statement in which it condemned a specific attack - on the American consulate in the Libyan city of Benghazi. Like this time, the UN Security Council communique did not say a word about the film that insulted Muslims. According to information from informed sources at UN headquarters, the majority of SC members, including the US delegation, spoke in favor of including a reference to the inadmissibility of insulting a religion in the text of the statement. However, this could not be done due to decisive resistance from France.

Meanwhile, nothing prevented the condemnation of the notorious film by UN Secretary-General Ban Ki-moon, who on September 13 stated that the film “apparently was shot with the expectation of stirring up intolerance and bloodshed.” However, he also stressed that "nothing justifies" the murders and attacks committed.

Obviously, the time has come not only to eliminate the consequences of terrorist acts and any manifestations of violence, but also to intensify the fight against the causes of these events. States and international organizations should initiate ongoing preventive measures to prevent the incitement of ethnic and religious hatred.

TIME LEGISLATIVE POWER TO USE

It is high time to limit, at the level of the legislative and executive authorities of states and international organizations, the very possibility of free dissemination of information that is offensive to other peoples or denominations, as is customary with regard to international terrorism, extremism, pornography or pedophilia. After all, the last provocation is not something exceptional in the newest stories USA and Western States. We all witnessed the spread of caricatures of the Prophet Mohammed in one of the European countries, the American pastor Jones defiantly burned the holy book of Muslims of the Koran in public places, and found the American soldiers in Afghanistan in the same exercise. And if in Russia they harshly suppressed an attempt by a group of hooliganism young women to desecrate a Christian church, in the USA and in the West they treat such egregious cases of hooliganism and incitement of religious hatred rather condescendingly. All the provocateurs listed above got off with purely symbolic punishments, and moreover, some, like the same fascist pastor Jones, gained fame and led radical extremist organizations and movements.

Life shows that the unjustified game of democracy, permissiveness, impunity leads to new tragedies and sad consequences for humanity. Terrorist attacks in the US 11 September 2001, the shooting of Breivik boys and girls of their country, other tragedies did not arise from scratch. American instructors trained future terrorists to control airliners, without thinking about what and where their graduates would fly, Breivik could freely buy a large amount of weapons and ammunition, and no one asked: with whom he is going to fight? In the conditions of scientific and technical progress, the role of the human factor increases immeasurably, and one person or a small group of people can cause irreparable damage to our civilization.

It should also not be forgotten that when the freedom of one person or a group of persons conflicts with the freedom and conscience of society, the state’s task is to protect, in this case, Muslims from fabrications and provocations discrediting their shrines. It would be good if the US authorities and their Western allies made the right conclusions from what happened and would not give unnecessary reasons for extremists and terrorists of all stripes to provoke the broad masses of the people to new disorders and riots, which, as we know from our history, most often happen meaningless and merciless. "