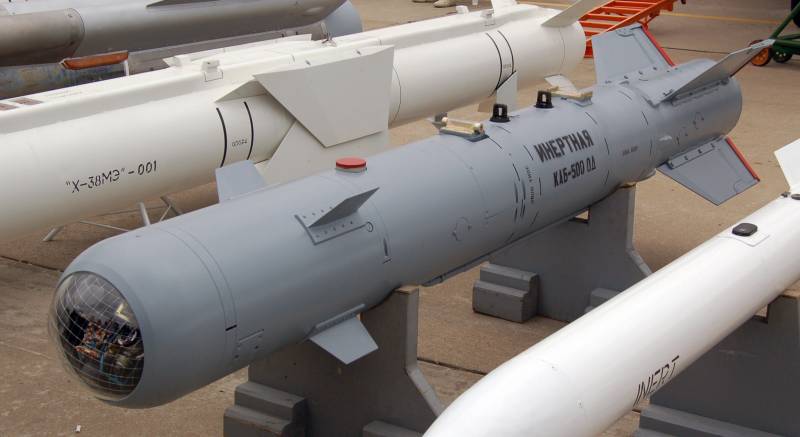 Volumetric explosion in one beat

Push-pull ammunition, or volumetric detonating bombs, which were discussed in the previous material, have a number of undeniable advantages. First of all, this is a huge power with a relatively small size. For example, ODAB-500 contains only 193 kg of liquid fuel, but produces a TNT equivalent of one ton. In addition, the bomb contains practically no fragments, which means that it does not spread its deadly influence outside the affected area. At the same time, it is impossible to hide from the ODAB - the shock wave flows into all the cracks of the shelters, guaranteeing severe barotrauma to the unfortunate. Along the way, it also burns out oxygen, causing asphyxia in miraculously surviving.

With such significant advantages, volumetric detonating ammunition has a number of disadvantages. First of all, this is the complexity of the design with two fuses (the second is necessary to undermine the aerosol), a leader and a stabilizing parachute. Some authors point to the “weather dependence” of ODABs - ammunition may not work in squally winds, rain and snow. It is impossible to use such equipment underwater and underground. It is also impractical to design small-caliber ammunition - bombs less than 50 kg and shells with a caliber of less than 220 mm. 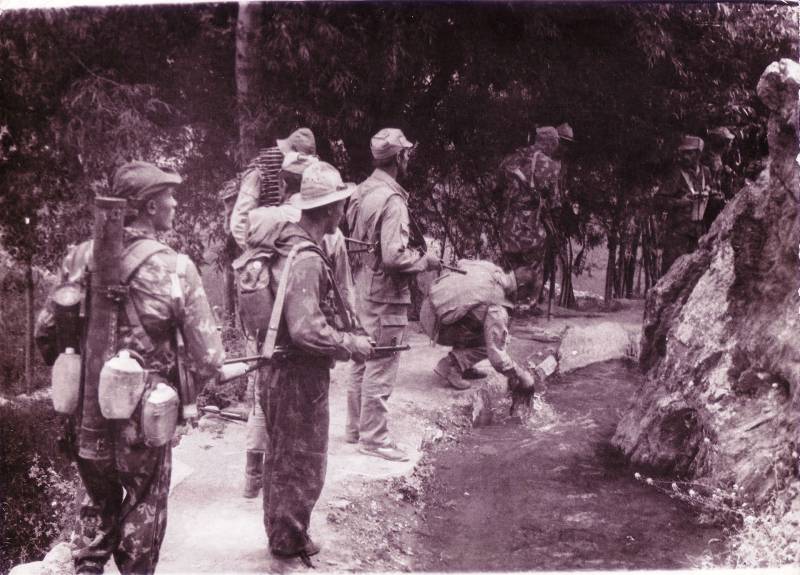 The debut of "Bumblebees" in Afghanistan. Source: en.wikipedia.org
To eliminate some of these shortcomings, thermobaric projectiles, or single-stroke volume explosion ammunition, were developed. From the name it is clear that in this case there is no preliminary procedure for spraying the aerosol, but the detonation does not become less voluminous. Americans call it weapon very aptly - "ammunition with an increased impulse in terms of pressure and thermal radiation." The mechanics of the explosion is very similar to the usual detonation of high explosive ammunition. In the first milliseconds of detonation, the products scatter in all directions and react with atmospheric oxygen. Additional burnout provides more ammunition power and a volumetric detonating effect. If it’s completely primitive, then thermobaric ammunition is a land mine that uses atmospheric oxygen as an additional oxidizing agent. Scientifically speaking, thermobaric projectile explosives have a negative oxygen balance, that is, an external oxidizer is required for complete fuel burnout. It has become a rule of good manners among gunsmiths to equip explosives with particles of combustible material, usually aluminum or magnesium powder.

The most successful thermobaric ammunition was the Soviet RPO-A Shmel flamethrower, which made its debut in Afghanistan. Prior to that, the army used the reusable flamethrower RPO "Lynx", which was put into service in 1975. With similar weight and size parameters, the "Lynx" was less long-range and powerful. But the "Bumblebee" turned out to be so successful that the Americans, having received such a trophy from the Mujahideen, created a similar weapon branch at home. Prior to this, the Pentagon's priority was push-pull volumetric detonating systems, in which, it should be noted, they have achieved great success. Unlike Russia, the Americans at different times were armed with several dozen different ODABs. 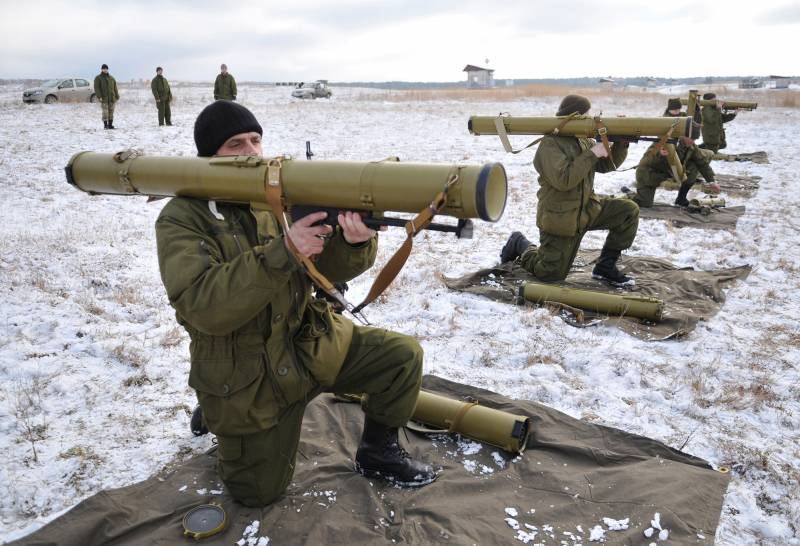 Ukrainian "Lynxes" from Soviet stocks. Source: livejournal.com
If you look at RPO-A, then he is not a flamethrower. Simply because there is no throwing fire in the usual sense - the weapon fires a grenade from a carbon-fiber barrel-container. Already at the target, due to the main damaging factors - the shock wave and high temperature - a fire can break out. Or maybe not flare up. "Bumblebee" is the next step in the evolution of flamethrowers, one might say, forced. As the experience of the World War showed, walking at the enemy with a jet flamethrower is, of course, spectacular, but completely ineffective. First of all, due to the loss of part of the incendiary mixture on the flight path, as well as a decrease in temperature at the target. And, of course, no one ever captured flamethrowers. And the one-time infantry RPO-A "Bumblebee" does not require special skills to use, which blurs the line between an ordinary fighter and a flamethrower. A little about the performance characteristics of the "Bumblebee". It aims at a maximum of 600 meters, weight - 12 kg, weight of thermobaric explosives - 2,3 kg, caliber - 93 mm. Three variants of warhead equipment. The classic RPO-A with thermobaric filling, the incendiary RPO-Z filled with a mixture of red phosphorus, and the smoke RPO-D. The Shmel-M flamethrower is 4,3 kg lighter, but equipped with a more powerful warhead. 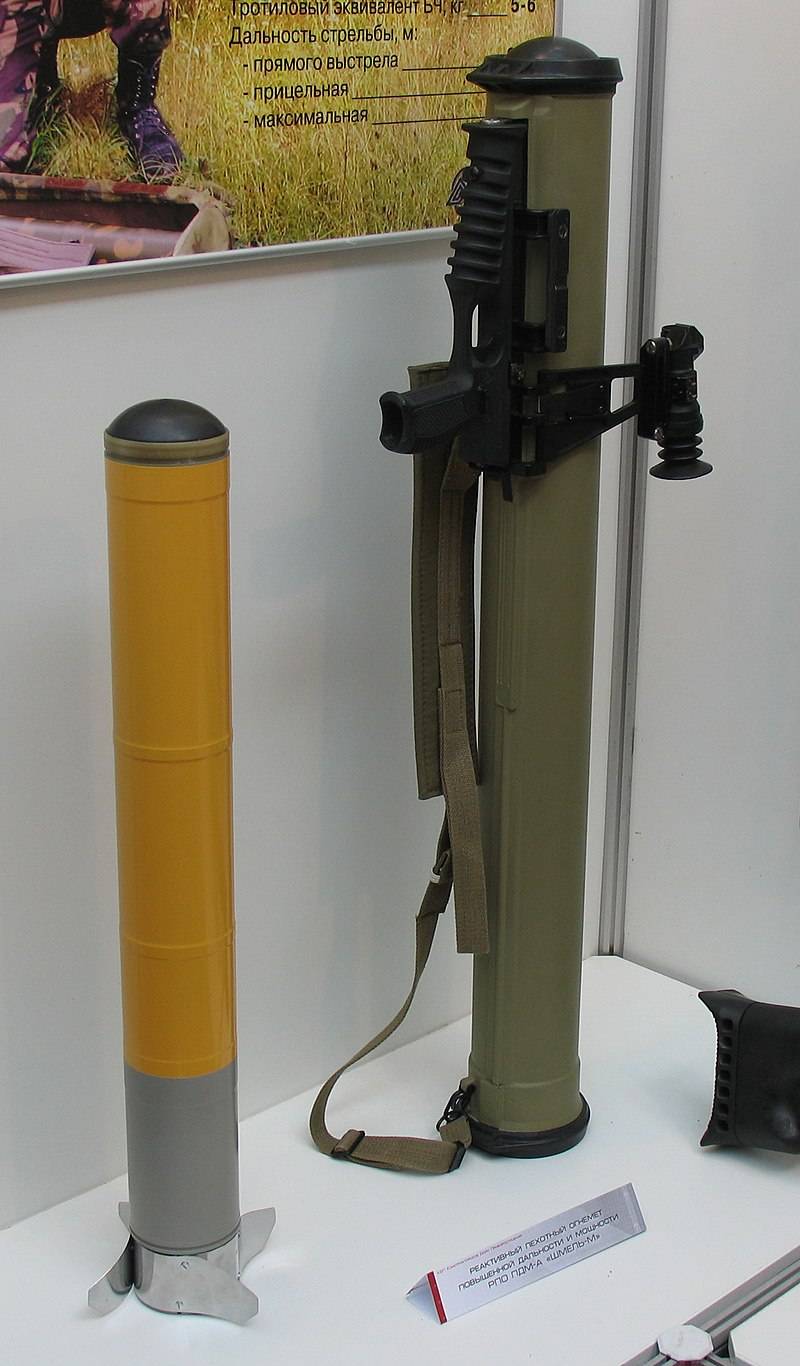 "Shmel-M". Source: en.wikipedia.org
Domestic infantry flamethrowers, for all their sinister glory, are typical urban weapons. Or to ammunition with reduced side effects. The thin-walled aluminum shell of the ammunition does not produce fragments, which allows the weapon to be used in close proximity to civilians. The flamethrower is great for getting the enemy out of buildings. One rocket that hits the building creates unbearable conditions for survivors in an area of ​​​​up to 620 square meters. meters. Even a gas mask does not save, primarily due to the burnout of oxygen in the affected area. In a closed room with a volume of 90 cubic meters, a grenade detonation causes a short-term pressure surge of up to 4 atm. and more. Many call the "Bumblebee" the deadliest infantry weapon, and some compare its effectiveness with 152-mm shells. Of course, taking into account the fact that the flamethrower is not even able to break through a brick wall. Structurally, this drawback is solved in the RMG "Zanos" multi-purpose rocket-propelled grenade. On the one hand, this is a grenade launcher, since a cumulative grenade is located in the bow, and on the other hand, a flamethrower - in the center of a thermobaric warhead. Such a tandem ammunition, the developers from NPO Bazalt diplomatically called multi-purpose. The principle of operation is simple and elegant at the same time - a cumulative jet breaks through a brick wall or light armor and "brings" a thermobaric charge inside with all the ensuing consequences. 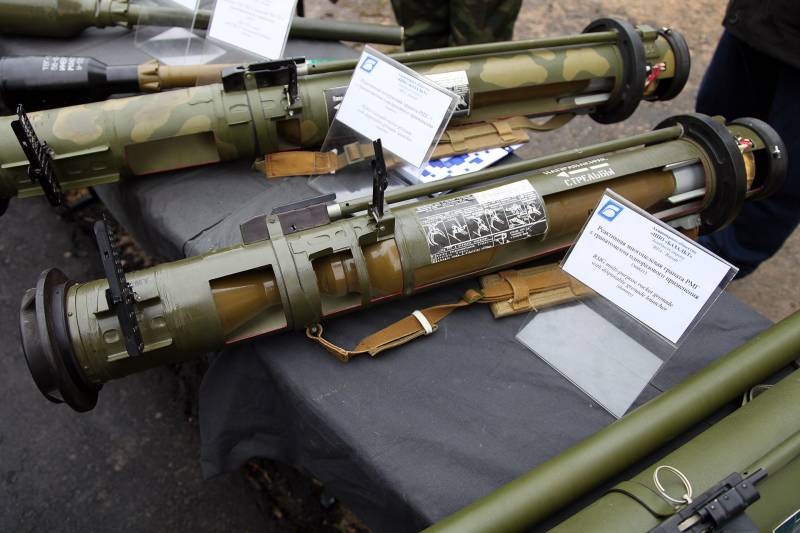 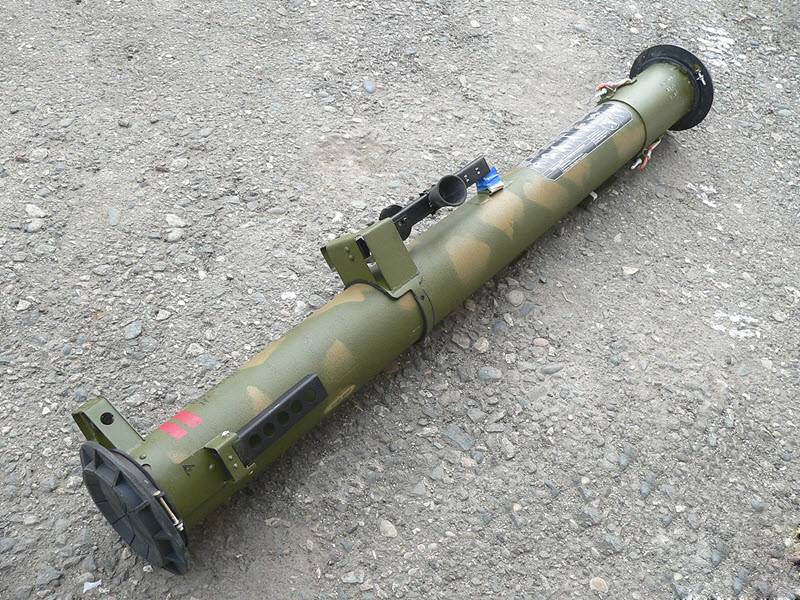 MPO-A "Borodach". Source: arsenal-info.ru
In the caliber of 72,5 mm, the most compact thermobaric disposable grenade launcher MRO-A "Borodach" is made. The length of the weapon is 900 mm, weight - 4,6 kg, of which 1 kg is explosive. Sighting range - 300 m, maximum - up to 450 m. Also made in incendiary design under the letter Z and smoke - D. In the description of the latter, the purpose of the weapon is of particular interest:

Shot TBG-7V for RPG-7 Source: zonawars.ru
The TBG-7V shot for the RPG-7 also belongs to the type of thermobaric weapon. This is the younger brother of an infantry flamethrower, which, nevertheless, is comparable in terms of lethal force to a 120-mm mine. Except for the splinter effect, of course. The next in the ranking table is the RSHG-1 (reactive assault grenade), created on the basis of the RPG-27. Caliber - 105 mm, weight - 8 kg.

At another level is guided missile weapons. For example, the 9M133F-2 thermobaric rocket for the Kornet, which, in terms of volumetric explosion power, reaches 10 kg of TNT equivalent, which is three times more than that of the Bumblebee.

The main thermobaric players on the fronts of Ukraine are the heavy flamethrower systems TOS-1 "Pinocchio" and TOS-1A "Solntsepek". The first has 24 guides, the second has 30. This weapon can be called an assault MLRS of the front edge, capable of working under enemy fire. Range - up to 3,5 km, minimum - from 400 meters. The network has enough video evidence of the use of heavy flamethrowers precisely from minimal distances, almost point-blank. Until now, there is no consensus in specialized military-technical sources which principle of a volumetric explosion is used in TOS ammunition - single-stroke or two. Judging by the frames of the chronicle, this is still a single-stroke thermobaric ammunition.

KAB-500OD. Source: wikipedia.org
The gunners have some thermobaric ammunition. Barrel systems require thick-walled hulls, otherwise they cannot withstand overloads when fired. Therefore, volumetric detonating weapons remain with multiple launch rocket systems. The 9M55S ammunition for the Smerch system with a caliber of 300 mm is equipped with a 280-kilogram warhead and is capable of hitting the enemy at a distance of up to 90 km.

The Aerospace Forces also have thermobaric ammunition. Corrected aerial bomb KAB-500Kr-OD, which can be used on targets from a height of 0,5 to 5 km. Weight - 370 kg, of which 250 kg fall on the warhead. This is a serious weapon for weakly armored, but important targets. Guided bomb targeting television. For larger targets such as "railway and highway bridges, military-industrial complex facilities, ships, warehouses of BC and railway nodes”, you can work KAB-1500Kr-OD. The bomb carries 650 kg of thermobaric mixture to the target, which makes it the most powerful ammunition of this type in the Russian army.