"Space Fleet of Russia": save the remnants and think about the restoration 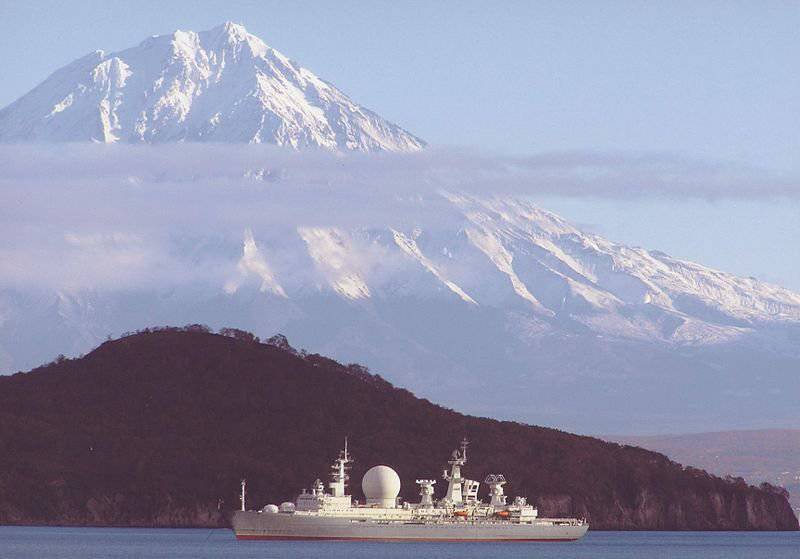 The ship command-measuring complex (CFC) "Marshal Krylov" began to carry out its tasks after a lengthy repair and sea trials. This is the only domestic ship in its class fleetproviding flight design tests of rocket and space technology. One of the two remaining ships of the once mighty and numerous Soviet “space fleet” - a series of ships that ensured control of space objects and communication with them.


The launch of the new combat service of the ship coincided with the exercises of the Strategic Missile Forces, during which combat training launches of all three components of the Russian “nuclear triad” were conducted: ground-based missile systems, strategic air-launched cruise missiles and sea-launched ballistic missiles. In the course of the exercise, new control systems for strategic nuclear forces were tested.

Once an integral part of our space program and strategic nuclear forces were the ships of the measuring complex and space communications - huge, snow-white, with giant domes and "plates" of antennas. They constituted the glory and pride of the Soviet Navy. They provided spacecraft flight control, communications with crews and satellites, trajectory and telemetry measurements of space objects. They helped the Soviet Union push the radio visibility zone far beyond its borders.

Over time, when space signal relay systems appeared, the value of the ships for providing continuous communication began to decrease. After the collapse of the Union, its own space program began to be phased out. About the testing of new ballistic missiles, the country's leadership, trying to be friends with the "civilized world", was not too much thought. It seemed that the flotilla "space fleet" is no longer needed. And in the 90-s years, ships, including new ones, began to "cut into needles." However, it later turned out that there was no money for the creation of a satellite relay system (because of the “default”, the third satellite could not be launched, and the first two soon developed a resource). Yes, and to improve the nuclear shield still had to. But when they came to their senses, it was already too late - almost nothing was left of the “star flotilla”. From the ships of the Department of Marine Expeditionary Works of the Academy of Sciences of the USSR (provided the space program), only one remained - "Cosmonaut Viktor Patsayev". From the command-measuring complex of the Navy (it provided strategic nuclear forces), only Marshal Krylov remained.

The fate of the rest of the "star" ships of the Russian fleet is sad. Only the research vessel Akademik Nikolai Pilyugin (project 19510 Adonis) is alive and now sailing under the Italian flag, like a cruise liner. In 1996, the ship completed on 60% sold the Mariotti shipyard, which, having received a ready-made ship hull with excellent seaworthiness, completed it as a cruise ship Seven Seas Navigator. Moreover, the Sakhalin CEC is flying the Chinese flag.

By the end of the 90-x, the manned space program was folded in favor of the International Space Station (ISS). The state could not or did not want to maintain the Mir station in parallel with the ISS. But to refuse international obligations - just could not. Management and communications were duplicated from American Houston. There was no relay system, and communication with the own orbital grouping was maintained almost only in the radio visibility of ground points. In fact, even today, when considerable efforts are being made to restore uninterrupted radio communications, the radio visibility zone has significant gaps, which clearly affects the space program. This is where the "space" navy would be useful! But, having removed the head, they do not cry through the hair. Soviet space dash remained in stories, along with the "space fleet". And today, having what we have, we have to deal with the restoration of what we already had.

Currently, the project of a multi-functional space relay system is underway. While in Kaliningrad region a ground command-measuring point has not been created, the research ship "Cosmonaut Viktor Patsayev" (for more than ten years, as moored near the Museum of the World Ocean in Kaliningrad) - surprisingly combines excursions and simultaneously works as part of an automated control system spacecraft. The situation would be funny if it were not sad - the existing complex, which performs the most important tasks, is forced to earn money by itself to maintain its efficiency. Several times, when weather disasters took place in Houston, the Viktor Patsayev complex took over communication functions with the ISS. Of course, its value will gradually decrease when other elements of the control system are put into operation. But in my opinion, if we want to develop our own space program (and apparently we still want it), it doesn’t stop us from thinking about the duplicate sea-based management systems that were thoughtlessly eliminated in the 90s.

Today, thanks to the heroic efforts of the crew, the RV Victor Patsayev regularly undergoes checks of the Maritime Register of Shipping and is a full-fledged ship, and not just a floating technical means. After the commissioning of the Baltic Instrumentation, he will be able to perform some of the duplicate functions, including at sea. Fortunately, the complex of its technical means was at one time modernized by the NPO Measuring Equipment. But we must understand that the stability of the space group depends on the duplication of communication and measurement systems. And here we should not neglect the Soviet experience, which today allows us to remain a space power. And based on this experience, in my humble opinion, one should think about the marine component of space systems.

But the Pacific Fleet, we have saved a truly unique ship. The last of the Soviet ships of the measuring complex, Marshal Krylov, which was part of the 30 fleet of December 1989, is a truly huge ship with a displacement of more than 23 000 tons. It remains today one of the largest and most technically equipped ships of our fleet. The composition of its technical complex and today has no world analogues and allows you to work with various space objects, communicate or control, work with telemetry information or determine the parameters of objects. Its autonomy is 120 days. "Marshal Krylov" is one of the highest achievements of Soviet science. Only by a miracle did he not suffer the fate of the other ships of the 35 th brigade of the measuring complex, which at the beginning of the 90's planned to eliminate completely. Marshal Krylov, almost the same type, was Marshal Nedelin, which at one time provided a unique operation to transfer equipment from the Salyut-7 station to the Mir station, as well as the Buran unmanned flight, was delivered for a scheduled repair at 1990- m But nobody repaired it. The unique ship was partially demolished, partially looted, and sold for scrap in 1999. The third ship of this project, the Marshal Turquoise, was cut unfinished on a slipway. The same sad fate befell six more ships of the 35 st brigade. And honor and praise to those whose efforts managed to keep the Marshal Krylov CEC!

When the troubled period of 90's ended and we again needed space programs and new means of nuclear deterrence, it turned out that there was something to provide for their test launches. The work of the Marshal Krylov crew accompanied almost all the significant tests of new missile systems and launches of spacecraft. It is precisely in the Pacific that the head units of the tested missiles fall at launch at the ultimate range. In the Pacific, satellites are finishing their work. In the Pacific conduct their tests weapons other countries. And the upgraded and repaired, which celebrated its 25 anniversary ship of the measuring complex this year, continues its service. 25 years is no time limit for such a ship.

Now much is being done to preserve and enhance what has been saved. No matter how happy the misfortunes and failures of the national space and defense program are, ill-wishers, I believe that we will see both new space expeditions and new ships of the "space fleet" of Russia. There are unique equipment, scientific potential, and stored experience of combat services.

In the end, the first Soviet "space fleet" was created on the initiative of Korolev, by re-equipping dry cargo ships. The main thing is that there is an understanding of the future of the country, as a great power - both a great cosmic and a great sea. The rest depends on our common work.

We are in Yandex Zen
Containment trajectory
Military reform as an integral part of the security concept of the Russian Federation: Systematic dynamic assessment
13 comments
Information
Dear reader, to leave comments on the publication, you must to register.