USS Gerald Ford, the first aircraft carrier in its class, will take part in NATO exercises in the Atlantic 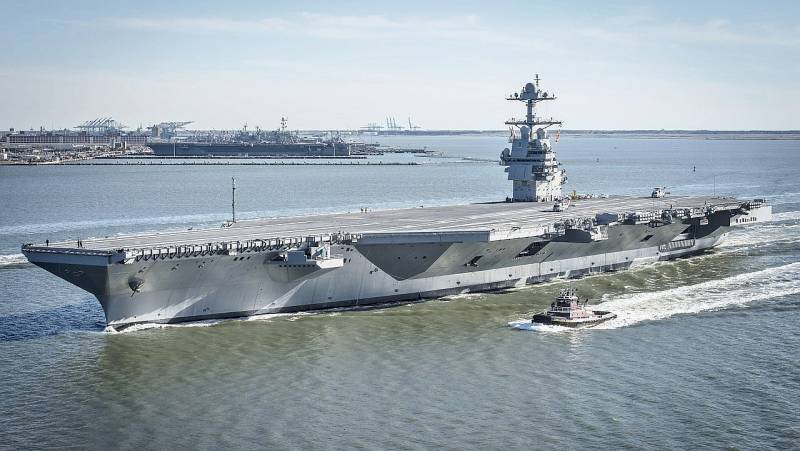 USS Gerald R. Ford, the first aircraft carrier of its class, has successfully passed test trials and will take part in NATO exercises in the Atlantic Ocean next week. A record $13,3 billion was spent on the construction of the supercarrier; due to various technical problems, the ship was tested and refined for five years.


The US Navy said the Gerald R. Ford will leave the world's largest naval base at Norfolk next Monday along with destroyers and other warships.

The Atlantic is a zone of strategic interests. Our main goal is to contribute to a peaceful, stable and conflict-free Atlantic region with the help of the combined naval power of our allies and partners.
said Vice Admiral Daniel Dwyer.

The American command does not hide the fact that one of the goals of the planned exercises in the Atlantic is to demonstrate to Russia the readiness to protect the interests and security of the NATO countries. The West is seriously concerned about the escalation of the conflict in Ukraine after Vladimir Putin's statements about mobilization and "the possibility of using nuclear weapons." weapons". The last Russian president did not say, but Western politicians will always find an opportunity to turn any truth upside down in their interests.

We are also showing Russia that there are a range of forces they will have to deal with if they move outside of Ukraine or escalate the situation in Ukraine in ways we deem unacceptable.
- quotes the words of the senior political researcher at RAND Corporation Bradley Martin press.

USS Gerald R. Ford, the most expensive US aircraft carrier, is the first Ford-class ship to enter service with the US Navy. For the first time, it uses electromagnetic systems to launch aircraft, which should replace steam catapults. During the trials, the ship encountered a number of problems, including the operation of new catapults and elevators that deliver rockets and bombs to aircraft on the flight deck.

In 2017, then-President Donald Trump told Time magazine that the US Navy should go back to using conventional catapults to launch planes because the electromagnetic system "costs hundreds of millions of dollars more and is useless."

The command of the Navy does not agree with this. Admiral Dwyer told reporters that the newest aircraft carrier "has already successfully completed over 10 ejections (EM catapult take-offs) and landings." True, according to Bradley Martin, it will most likely take years to eliminate all the flaws in the new ship systems. Which, according to him, is not a surprise for the first aircraft carriers of a new class.

The fact that the lead ship of the new class had some serious developmental problems does not change the US Navy's strategy that carrier strike groups are the center of deployment and conduct of maritime military operations.
— concluded the American expert.

The calmness of the expert somehow does not fit with the statements of the American command and politicians that Russia is about to attack one of the NATO countries or unleash a nuclear war. What then will American admirals do if, in such a situation, aircraft launched from the latest catapults cannot take off and fall into the sea? Or the elevators will break down again, and the planes will be without bombs and missiles ...