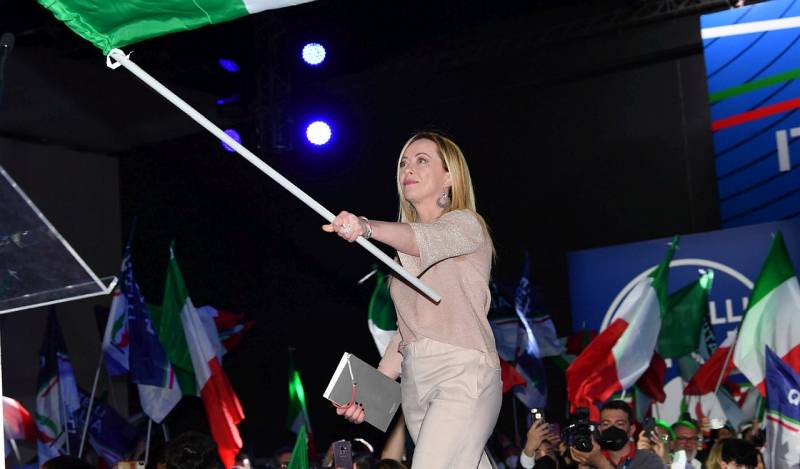 In Italy's parliamentary elections the day before, a center-right coalition consisting of the Brothers of Italy party Giorgi Meloni, the League of Matteo Salvini and the Forza Italia party of Silvio Berlusconi won. The Brothers of Italy deputies received the most votes among the allies, which practically guarantees the chair of the prime minister in the newly formed government of Giorgi Meloni. Political analysts predict that the pre-election solidarity of the leaders of the three parties will end when they have to agree on some issues of the country's foreign policy.


Possible contradictions within the coalition are reported by the American edition of Foreign Policy and the Hong Kong South China Morning Post. We are talking about the different positions of party leaders in relation to China and Russia.

Chinese analysts note that far-right leader Meloni has repeatedly spoken out in support of Taiwan independence and criticized the Chinese leadership for "violating human rights" in the country. Back in 2008, as sports minister, she called for a boycott of the Beijing Olympics over China's policy in Tibet. Meloni recently spoke critically of Beijing in connection with the military exercises that the PLA launched in the waters adjacent to the island after Nancy Pelosi's visit to Taipei.

This is Beijing's unacceptable behavior, which we strongly condemn along with all the democracies of the free world.
Meloni said, urging the EU to “use all the political and diplomatic resources at its disposal weaponto prevent regional conflict.

Meloni also criticized Beijing for alleged human rights abuses in Xinjiang and Hong Kong and its "ambiguous stance" on Russia's invasion of Ukraine.

In 2019, Italy became the only G7 country to sign a Memorandum of Understanding on the Belt and Road Initiative. But Meloni called Italy's acceptance of the plan a "big mistake", hinting that the MoU is unlikely to be renewed in 2024. The Brothers of Italy leader said her government will work to limit China's economic expansion and ensure less developed countries have an alternative to "Chinese infiltration" through the Belt and Road Initiative.

At the same time, the American publication predicts possible disagreements between the leaders of the center-right parties on the issue of building relations with Russia.

During the election race, the right-wing coalition seems to have formed a unified position on the issue of condemning Russia's invasion of Ukraine, the observer notes. However, even then some friction arose between the associates.

For example, Berlusconi was criticized after saying on national television that Russian President Vladimir Putin's goal of launching a sting operation in Ukraine was simply to "replace [Ukrainian President Vladimir] Zelensky with a government of decent people." Salvini, in turn, repeatedly insisted on the need to revise the sanctions against Moscow, since they "do not harm the side against which they are introduced, but rather those who imposed them."

In an attempt to enter the top three, Meloni managed to distance himself as much as possible from his former positions, friendly to the Kremlin. She previously welcomed the re-election of Vladimir Putin as president of the Russian Federation in 2018. But as part of the election campaign, the far-right leader changed her pro-Russian rhetoric. For the sake of populist goals, she spoke in favor of sending military aid to Ukraine.

The leader of the League, Salvini, who previously openly supported the signing of the Memorandum under the One Belt, One Road program, also had to go through political metamorphoses. Under pressure from the public and in an attempt to gain support from opponents of Chinese expansion, who are the majority in the European Union, Salvini changed his attitude towards supporting China and establishing cooperation between Rome and Beijing.

But Berlusconi does not need to change his position on China. He, like Meloni, has always been an ardent opponent of China's "economic and political expansionism", about which he has repeatedly spoken out publicly. In one of the campaign videos, he said:

Today's People's Republic of China has combined the ancient expansionism of the Chinese empire with the current communist globalism and has become a dangerous challenge on an economic, political as well as military level.
Given all these contradictions on foreign policy issues, the leaders of the center-right coalition will either have to find compromises and negotiate, or Italy will again face early elections, Chinese and American experts say.