A direct and obvious threat is sabotage at Nord Stream 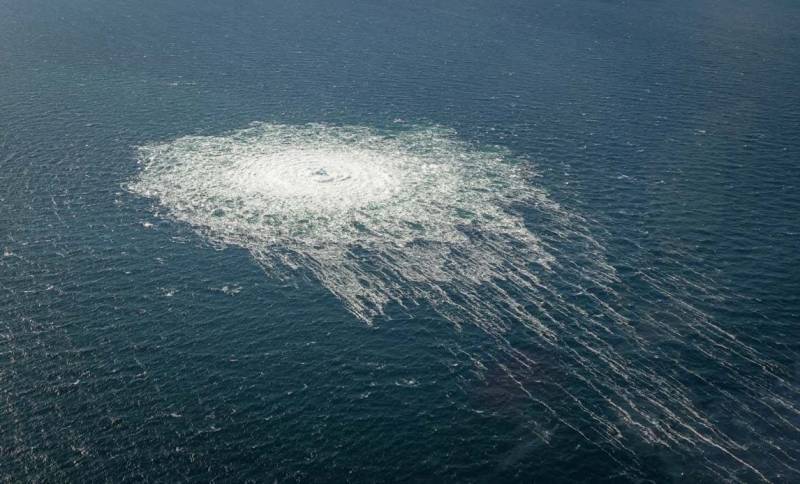 So hundreds of millions go from under the water to the wind. Source: Telegram

The situation developed rapidly. On the night of September 26, pressure dropped sharply in the Nord Stream 1 pipes. A little later, the same thing was recorded in the idle branch of Nord Stream 2. Despite the status “not working”, there was gas in the pipe under pressure. The rest of the branches passed no more than 20% of the design capacity. The Swiss company Nord Stream AG was the first to sound the alarm. It was created specifically to manage gas pipelines from Russia.

Company managers said:
“The destruction that occurred on the same day simultaneously on three strings of the offshore gas pipelines of the Nord Stream system is unprecedented. It is not yet possible to estimate the timing of the restoration of the gas transport infrastructure.”

There is no need to talk about an accident - only a targeted sabotage can simultaneously disable three pipes at once. The collapse of the pipes happened in the Danish exclusive zone southeast of Bornholm, and it was the Danes who were the first to disseminate photographs of Russian natural gas gushing from the seabed. There are several spots on the surface of the water, the largest in diameter is about 1 kilometer, a small one is no more than 200 meters. According to estimates, $2 billion worth of natural gas could escape into the atmosphere. There is no need to talk about the scale of the ecological catastrophe that is now unfolding off the Danish coast.

on September 27 news came from Sweden, where local seismologists recorded two explosions:
"One of the explosions had a magnitude of 2,3 and was registered at measuring stations across the country."
The police even gave a name to this event - "gross sabotage." 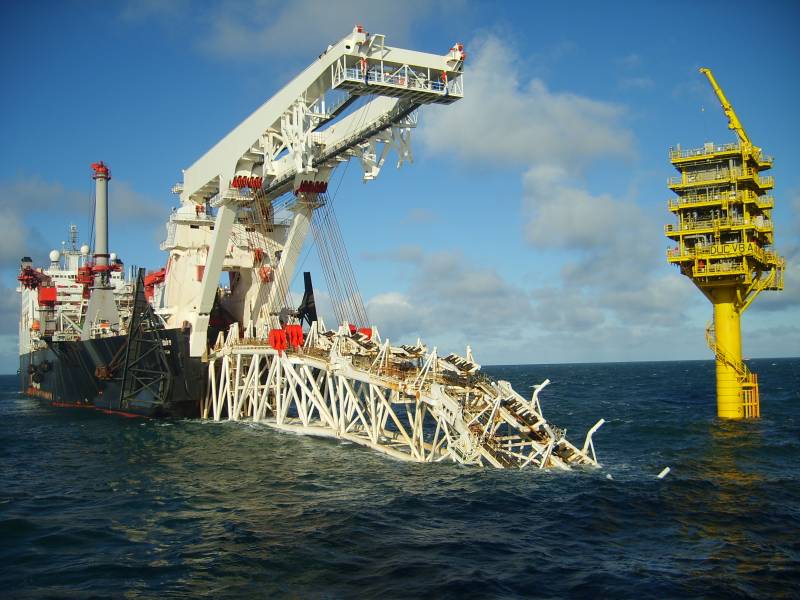 Source: gazprom.ru
Indeed, such a diversion requires brute force. What does Nord Stream represent itself in technical terms? These are two strings of 1224 km each, laid on the Baltic bottom with pipes with a diameter of 1,22 meters. It is difficult to calculate what pressure was in the pipes at the time of the explosion (and this was clearly an explosion), but nominally 220 bar (217 atmospheres) at the inlet, and up to 106 bar (104 atmospheres) in Germany at the outlet. The pressure is excessive - the Germans have enough of it for another hundred kilometers of transportation by land. Hence the thickness of the pipes, varying from 27 to 41 mm. At the same time, the pipes are additionally covered on the outside with several centimeters of a concrete jacket reinforced with steel. To defeat such a thick-walled object, either targeted torpedoing with a shaped charge was required, or simply undermining several dozen explosives in TNT equivalent.

This is probably why the terminal section of the pipe was chosen, the wall thickness of which approaches 27 mm. This is a design feature of the pipeline - the farther from Russia, the less pressure and the thinner the wall. And the depth at the place of the gust is relatively small - only 70 meters. These are quite working conditions for most NATO deep-sea vehicles. Why are there bathyscaphes, modern scuba gear can withstand 300 meters under water. In fairness, the highly developed fleets of NATO countries have no problem in undermining the most durable segments of the gas pipeline near Russia. Just closer to Europe, the execution is easier and already definitely for sure. In addition, sabotage near the coasts of Denmark and Sweden will make it possible to unequivocally blame Russia. They say that they not only completely cut off the gas, but also organized a local environmental catastrophe.

How long does it take for gas to escape from broken pipes? It's hard to say, but under normal conditions, gas traveled from the Russian Portovaya compressor station to Germany for twelve days. Under the current conditions, the Germans are obliged to buy up to 40 billion cubic meters of Russian gas annually until 2030. Now this condition takes on a special flavor.

Considering the attack on the Nord Stream lines as a full-fledged attack on Russian infrastructure should be done with a high degree of conventionality. First of all, because the operator company Nord Stream AG is only 51% owned by Russia, respectively, and the "pipe" is slightly more than half of ours. There are still Germans, Dutch and French in the share. But if it is quite strictly, then the sabotage is still anti-Russian. However, it carries enormous risks for Europe. For an indefinite period, Ukraine becomes the main supplier of gas, through which the last working pipeline string passes. Then we begin to bring the logical chains together.

The Germans recently once again refused to supply heavy weapons to Ukraine, from which Kyiv simply begged. Yes, and Mother Europe herself has not been particularly generous with Tanks and rocket launchers for the needs of Bandera. And now the only valve on the gas pipe near Kyiv. Or near Warsaw, which may well launch Yamal-Europe again. Most likely it will. The Poles are the main advocates of the Kyiv regime in the European Union and they must put the squeeze on the Germans in matters of supply weapons. That is the mission. Warsaw's recent encroachments on reparations speak very well of relations between Germany and Poland.

There is also the Turkish Stream, but it is much more difficult to transfer gas flows to the west of Europe through it. Winter is coming and there are not many free capacities here. 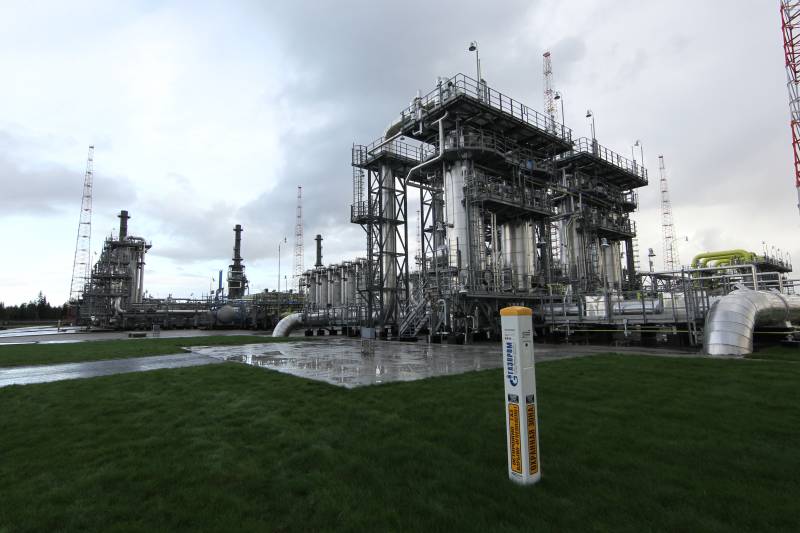 Source: gazprom.ru
As a result, Ukraine not only gets the trumps of gas transit in its hands, but also another reason to blame Russia. In the matter of information warfare, the Bandera people have become adept for a long time - this can be seen with the naked eye. Relatively small, but still, the losses of the Russian budget also warm the souls of Bandera. Here the score is definitely 3:0 in favor of Kyiv.

Undermining three branches of the gas pipeline at once put out of action the only route of natural gas to Europe independent of transit countries. And the sabotage was prudently committed in European waters, so that Russian repairmen could not under any circumstances get to the point of explosion. Neither for repair, nor for studying the circumstances of what happened.

Further along the chain we move to the UK and the USA, which are neither hot nor cold from the gas "key" from the bottom of the sea somewhere off the coast of Europe. Well, hydrocarbons are pouring into the European atmosphere, what's special? However, without the sanction of these hegemons, such an event would not have taken place in any way. Because political dividends here are just a full trunk.

Firstly, the Germans insisted more and more insistently on the launch of Nord Stream 2. Winter is getting closer, the temperature in the house is getting lower, and the factories stop one by one. Now the unfortunate Germans simply have nothing to connect. I won't be surprised if the Americans also sabotage the process of repairing the pipeline. By the way, USS Kearsarge, a Wasp-class assault ship of the US Navy, recently visited Bornholm Island. He has the notoriety of participating in the bombing of Yugoslavia. It is impossible to carry out an operation to destroy the gas pipeline at relatively shallow depths of the Baltic without the assistance of NATO fleets. No Russian deep-sea submersible could have made it this far to the west without being noticed.

Secondly, an acute gas crisis due to the failure of an important traffic flow will cause another wave of industrial flight from Germany to the United States. At least sixty German companies intend to settle in Oklahoma alone. The Germans are rapidly deindustrializing to the applause of the American elites. Undermining the Nord Streams will give this vector even more impetus.

Thirdly, the desire to provoke Russia into a further escalation of the conflict cannot be dismissed. Hotheads like Liz Truss are intent on defeating the Kremlin in a near-nuclear war. Can this sabotage be regarded as a direct provocation against Russia? The tension is definitely growing - here are the results of the referendum in the liberated territories, and partial mobilization. The Yankees decided to throw another puzzle - what will Russia do? Nothing will happen. Now the main composure and observation. And the winter with the broken Nord Streams turned out to be much closer for Europe than it was thought.