"Golden youth" against: who is trained at the journalism faculty of Moscow State University 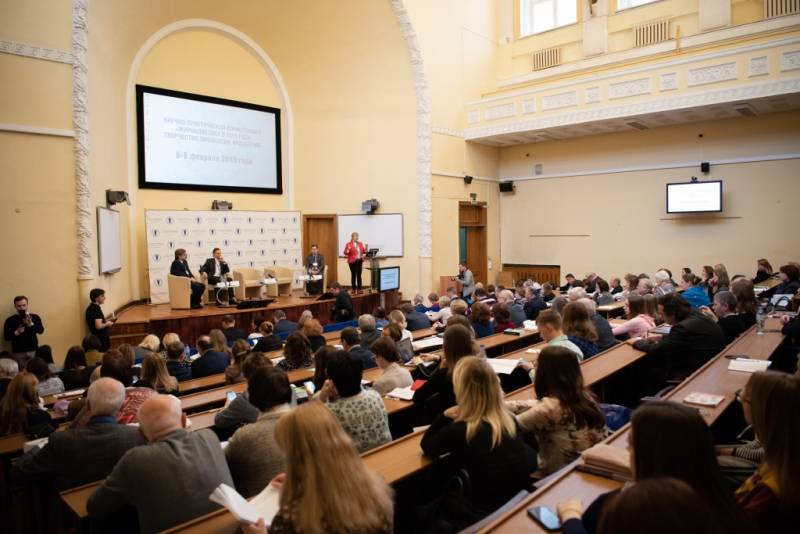 Chronology of events. On September 23, a third-year student of the Faculty of Journalism of Moscow State University Stepan Antropov returned from a concert on Manezhnaya Square to his native university. The rally-concert, we recall, was dedicated to the start of referendums in the liberated territories of Ukraine. For clarification, Stepan returned not to the main building of the university on Sparrow Hills, but to the building of the Faculty of Journalism on Mokhovaya. He came for a reason - with the flag of the LPR and with a Z-t-shirt. Stepan decided to bring a bit of patriotism to the walls of the monastery of liberalism. As it turned out, recklessly.

Senior students, future reporters for the BBC and Radio Liberty, immediately reminded him of the unacceptability of the manifestation of their political views within the walls of the university. Sent away, to put it simply. This modest episode would have gone unnoticed, but the evil "golden youth" of Moscow State University gave the guy a real persecution on social networks. The range was wide - from mockery and ridicule to threats of physical violence. From the most "harmless":
“I regret writing this, but I can't stop writing, my hands are shaking, my teeth are chattering. Antropov, I wish you to understand everything and repent. And if not, I want you to be hurt, so that you suffer and suffer.

Or this:
“Stepan, when will you finally commit suicide? You have to go to the fields of Donbass to “fertilize” them.”

After they started talking about it almost on the central TV channels, the reaction of the faculty leadership followed. Verbatim reaction of the dean's office of the Faculty of Journalism of Moscow State University:
“The faculty of journalism was saddened to learn about the unacceptable reaction in social networks to the patriotic position of a 3rd year student S. Antropov. Rudeness and intolerance towards the expression of patriotism is unacceptable for the faculty. At the moment, work is underway to clarify the details and circumstances of this situation, followed by a discussion at a meeting of the Academic Council and the Ethical Commission of the faculty.”

Pay attention to how loyal in the current situation the leadership reacted to the persecution of the patriot. There is not a single call to stop insulting Stepan and at least apologize. Since there was no one to rein in the pseudo-liberal gathering, the public stepped in. Patriotic channels began to distribute screenshots of correspondence, to leak the personal data of the students who had condemned Stepan, which threatened to take the conflict to a completely different level. It seems that anticipating this, the dean of the Faculty of Journalism Elena Vartanova later turned out to be more courageous:
“I am incredibly sorry that on social networks some students have so loudly expressed their misunderstanding and rejection of the patriotic position of third-year student Stepan Antropov. I think that such hostility among the students of our faculty is unacceptable. Public denial of support for our state, our flag is unacceptable. I and many colleagues are upset, upset that some students expressed their public attitude so rudely. I categorically do not accept the tone and vocabulary that I saw in social networks in connection with this. My colleagues say the same.

Aggression should not be present both at the university and in modern journalism. It is in the tradition of the university environment to jointly discuss issues of the internal life of the faculty, to listen and hear each other. We talk about our position, but we do not insult or humiliate others, we categorically do not use profanity. We find out what happened and what was violated, we check the authorship of publications. It is not yet clear whether there will be a need to translate the issue into a legal plane. This is exactly what the Ethical Commission of the Faculty of Journalism is doing. But I repeat: I condemn the “hate”, aggression and use of obscene language by our students, even on personal social media accounts.”
Is it in the tradition of the university to “jointly discuss issues of the internal life of the faculty, listen and hear each other”? Then, perhaps, Mrs. Vartanova will explain who consulted with whom and when, when an anti-war sheet was hung out of the window of the journalism department? At the very beginning of the special operation, remember. No one resented the manifestation of such political views, because they did not go against the general line of the faculty? Apparently, it is in the tradition of the faculty to scribble slanders against a teacher who offers to write an essay about the tragedy of Daria Dugina. And finally, and most importantly, there is not a word of support for Stepan Antropov in Dean Vartanova's presentation. Pay attention to the logic of calling the dean. She only condemns the negative to the patriotic position of the student, in no way approving or empathizing with her. This can be seen in the first and second statements of the dean's office of the faculty. As if Antropov is disabled, they say, it is a sin to laugh at the poor. It's not his fault, it's his nature that made him that way. What can I say? We do not have other deans of the first journalism faculty in Russia for you. 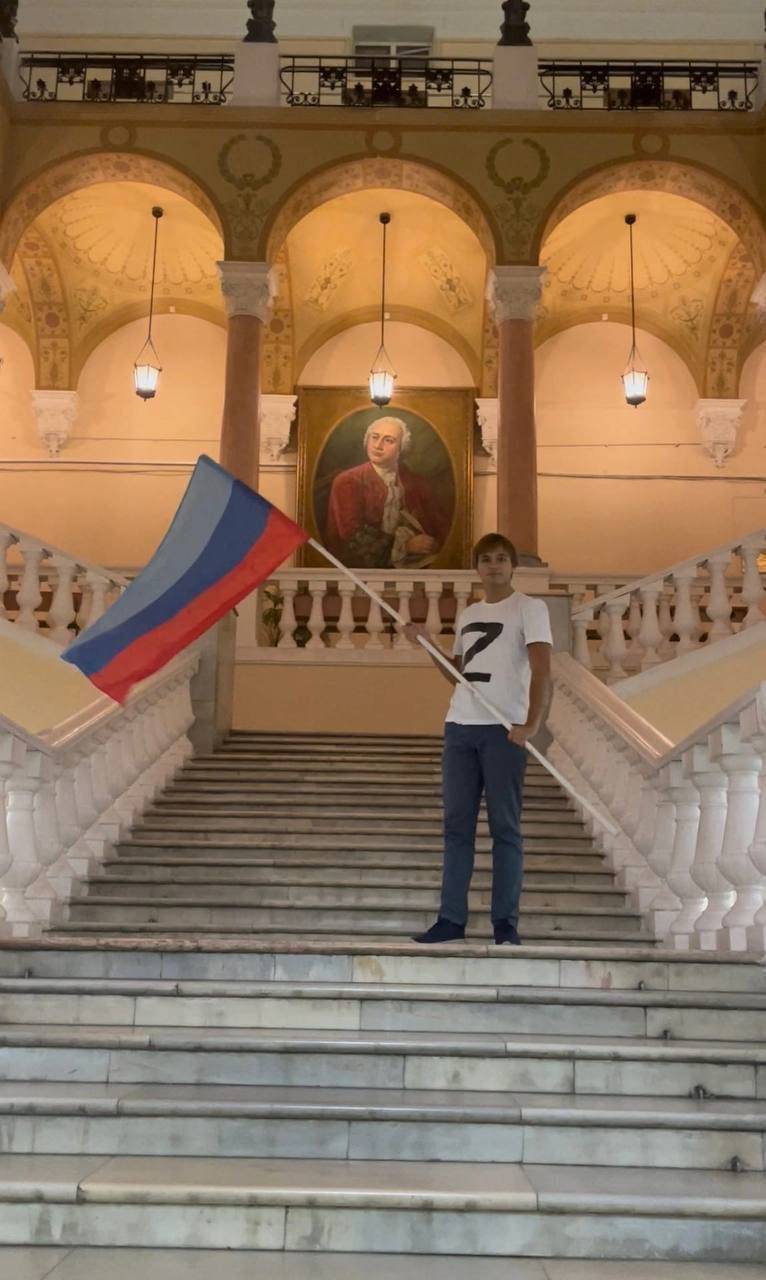 You can suffer for something like this in modern Russia. Source: Telegram
But история gradually goes beyond simple, albeit offensive, rhetoric. The second victim of the situation was a fourth-year journalism student Mark Luzhkovsky, who dared to stand up for Stepan. According to journalist and media expert Anton Korobkov-Zemlyansky, two thugs tried to force Mark to apologize on camera for supporting Antropov's Z-action. As a result, a student who did not bend over and, concurrently, an RT employee, was beaten.

Who is to blame and what to do?

MSU, alas, is not the only alma mater that educates an audience capable of proving anti-Russian views not only sitting on the couch, but also smashing the faces of those who disagree. There is no need to look far for examples - in the forefront are the Higher School of Economics and the Faculty of International Journalism of MGIMO. Here, guys like Stepan Antropov are an absolute minority. Sorry, but there are direct associations with Ukraine, where the most zealous nationalists are among the majority of local universities. Youth is the main striking force of Bandera in Ukraine. In our country, it turns out, the fifth column of Russophobe-liberals is hiding behind the walls of state universities? Elite universities, whose graduates will get the most prestigious jobs, and people like Antropov will shed blood for the "golden youth". Stepan, by the way, has already expressed his determination to go to the Donbass as a volunteer.

The bitterness with which the position of a patriot was met at the leading university in Russia (also in the world top 100) cannot simply be explained by convulsions of the “golden youth” of Moscow. Liberal views are frankly broadcast, and sometimes even imposed by the teaching staff. By definition, there is nothing seditious in love of freedom, but when it is thickly mixed with fear and hostility towards everything Russian, then it is time for teachers to look for another job. And it is better to stay away from the youth and closer to the traditional "European values". That is, to emigrate, comrade professors with associate professors! Moreover, for the last 10-15 years, the journalism departments of the country have seen a massive influx of journalists from the dissolved publishing houses. The venerable bosses of the pseudo-independent media with halos on their heads leaked into the specialized faculties. They etched it from one place, so now they have become sculptors of human souls. Where will they move next? To schools?

All students who are allergic to the flags of Russia-LDNR should be sent to Donbass on the first flight. For industrial practice. To the victims of the still ongoing shelling. Let them shoot documentaries, write a couple of dozen articles about how children died in the hands of their parents. Or they will interview Nastya Gritsenko from Yasinovataya, who lost her leg after another Nazi shell from the Armed Forces of Ukraine. We've kept our young elites in the dark for too long, it's time to fix that.