October 24 2012
2
In 1854, a native of Bavaria, Wilhelm Bauer (Bauer, Sebastian Wilhelm Valentin, born 23 December 1822, Germany, Dillingen - 20 died June 1875, Munich, Munich) addressed the Russian government with a proposal to build a submarine (the author called it “hyonavacial unit ") As well as an underwater corvette equipped with 24 guns.

The appeal to the Russian government was preceded by a long история. Bauer, who was a turner in the original specialty, served in the Bavarian army in cavalry, and then in artillery, where he was promoted to corporal. During the German-Danish war, when the fleet of Denmark struck serious blows along the German shores, Bauer set about trying to construct submarines capable of preventing enemy ships from attacking from under the water.

In 1850, with the money provided by the Schleswig-Holstein Army, several private individuals and admirals built the first Bauer submarine, Der Brandtauscher, in Kiel. Due to insufficient those. The knowledge of the inventor of the ship was unsuccessful - in 1851, the submarine Bauer sank in Kiel harbor. Later it was raised, and today it is kept in the museum of the maritime school.

Attempts by Bauer to interest Austria and Prussia with his invention were unsuccessful. After this, Bower turned to England, where for several years he enjoyed the patronage of Prince Albert, but was refused his services in England. After Bower failed in the United States, he decided to try his luck in the Russian Empire, where he finally found use for his inventions. 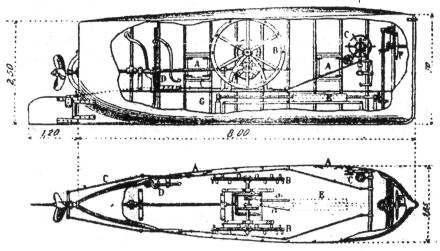 The drawing of the submarine V. Bauer "Monkfish", Russia, 1855 g

"Hyponavt" Wilhelm Bauer in a memo to the Naval Ministry of Russia 13 March 1853 wrote:
"The undersigned has a model of the invented hyponavatic projectile, which is able to move under the surface of the water, and the purpose of which is underwater military operations. The projectile ... having the appearance of a seal moves with the help of not gas, but gas force at a speed equal to in all directions, not only on the water, but also under the surface of the water. This projectile, which is controlled by the people in it, is able to fit under the keel of ships invisible to the enemy ... According to the experiments I made myself, there is a sufficient amount of air at 8 hours for 5 people, and there is no need for chemical reproduction of oxygen or communication with the air outside. But if (for example during a blockade) you need to stay at a depth of 150 feet more than 8 hours, then air can be resumed at assistance of a raised leather sleeve, which is sixty feet long. At the same time, it is not necessary that the projectile itself rise to the surface, and the very float attached to the sleeve is enveloped in sea grass so that it cannot point to projectile absence. When the renewal of air after 20 minutes is completed, the sleeve is pushed into the projectile until the next use. The projectile is equipped with six firecrackers, charged with 600 pounds of gunpowder, and eleven bombs, installed in such a way that the projectile manager, without leaving it, attaches them to the enemy ship’s keel using a mechanism. The mechanism for attaching bombs is driven from inside the projectile. Attaching takes place without impact or noise, in 15 seconds, during which the hyponautic projectile with two hooks located on the rear and front parts of it, is attached to the keel of the enemy vessel in such a way that it does not lag behind from agitation or when changing course. .. The projectile is supplied with rocket floats, which emit from 170 to 300 rockets simultaneously in a conic-spiral form. These floats make a terrible action, but it is difficult for the enemy to recognize them on the water. "

Bauer was given the opportunity to build his submarine at the electroplating plant owned by the Duke of Leuchtenberg, and also to make a model of an underwater corvette equipped with 24 guns on the scale of 1: 12 in its own workshop. Bauer demanded, in addition to monetary compensation, the assignment of the title of an underwater engineer. He was enlisted in the Navy Department for active service and was given the uniform of a free mechanical engineer.

02.11.1855, the boat was taken to the bank of the Obvodny Canal, and 3 was lowered on November - they put it on the barge sideways and were held under the bridge in this position. When crossing the barge stranded and cracked, filled with water. Due to severe frosts, attempts to remove it from the ground were not crowned with success, and the submarine and the barge spent the winter in the Obvodny Canal. For the protection of the submarine and its subsequent maintenance on the vessel appointed crew. The first commander of the submarine Bauer was Lieutenant Kruzenshtern, who was later replaced by Lieutenant Fedorovich, in which he passed her basic tests. 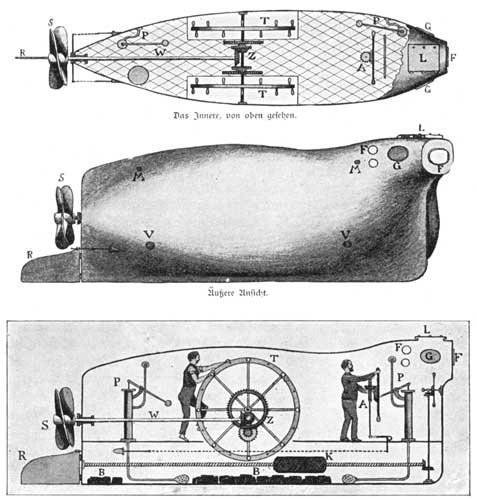 20 May 1856, the submarine Bauer was sent to the port of Kronstadt for testing. In the book “Underwater Navigation”, D. Golov calls this submarine “Monkfish”, but this is not confirmed by archival documents. Bauer considered a dolphin a prototype of his own ship, therefore the hull in cross section had an elliptical shape.

The hull of the submarine was made of 15-millimeter iron sheets. Thick elliptical iron frames were used to fasten the sheets. In the forward part there was a diving chamber separated by a partition - to exit the diver from the submarine, it was filled with water, after his return - it was blown with air. The movement of the submarine was carried out due to the muscular strength of the sailors who rotated the 4 stepped wheels. The wheels using a friction clutch set in motion a propeller. According to Bauer, the speed of the submarine was supposed to be up to 7 nodes, however, the tests failed to develop a speed of more than 1 node, because the sailors were quickly tired. Because of the low speed, the boat was badly obeyed the helm. Maximum mileage at 1 speeds mile per hour - 100 fathoms. Cylindrical tanks were used to immerse the vessel and hold it at depth. When the 4 was immersed, the tanks were completely filled, and the fourth, a smaller one, was designed to hold the submarine at a predetermined depth. During the ascent, water was pumped out with hand pumps.

On the nose, the submarine was carrying a large mine, which was to be attached to the enemy vessel using gutta-percha gloves. To clear the air of carbon dioxide, artificial rain was used, which was created by pumping water through 7 pipes with small holes. Tests of the submarine began in Kronstadt 26 in May 1856. Fired 5-6 dives. On the same day the submarine Bauer was examined by the Grand Duke Konstantin Nikolayevich. Later, Academician Lenz and his assistant Frisch took part in the dives, who were interested in the influence of the submarine’s diving on the work of the compass.

06.09.1856, on the day of coronation of Alexander II, V. Bauer made a dive, taking with him not only the crew, but also four naval musicians. The musicians and crew, with the first shot of the salute, began to sing the anthem, which was muffled on the surface.

26.08.1856, the submarine attempted to bring a mine under the surface ship (under the terms of the contract, the submarine was supposed to set 6 mines for one voyage), which was not crowned with success. Tests continued until 02.10.1856 g, when the submarine was supposed to pass under a surface ship on the Northern fairway. When you try to go under the ship, the submarine at the depth of 5,5 meters buried its nose in a sandy can, and the screw got tangled up in the algae. V. Bauer pumped water out of the tanks, dislodged cast-iron ballastins, which served as an emergency load, after which the bow of the vessel rose to the surface. After opening the access hatch, despite the water entering the boat, the entire crew got out and was picked up by lifeboats from the screw ship Bumblebee, which ensured the testing. The submarine sank. She was raised only 18.02.1857 g., After which the submarine was taken to St. Petersburg to the New Admiralty. In November, 1857 was dragged to the small elling of the Okhta shipyard. Bauer's submarine was declared unsatisfactory to the contract - to dive to the depth of the 1,5 meter it took 25 minutes; grooves began to flow at a depth of 2,5 meters; The estimated depth of the dive 46 meters (150 feet) was not provided, etc. 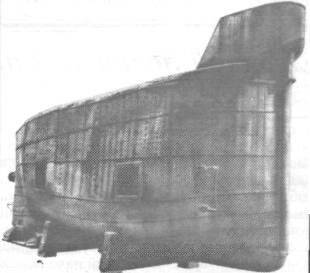 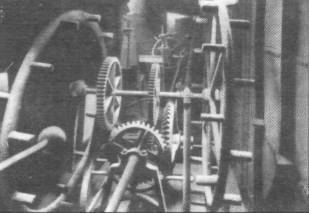 The first submarine of V. Bauer (exterior and interior. Maritime Museum of Kiel)

Bauer was asked to compile a list of corrections that would allow the submarine to continue testing at 1858. However, instead, Bauer blamed the test participants for ill-will, demanded that the money allocated for repairs be handed to him personally and refused to submit a list of corrections. 25 February 1858, after unsuccessful negotiations, Bauer was fired from the service with the wording because "he did not execute the production of the submarine and the model of the underwater corvette." The unfinished model of the underwater corvette was left to Bauer, the 22 submarine of May 1858 was lowered into the water and the Bauer mechanic was handed over to the receipt. There is no information about the future of the submarine. In his book, the mechanical engineer Golov D. writes that the submarine remained forever on Okhta.