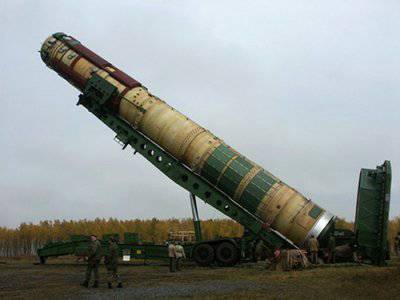 The last two months have been rich in news about the development of domestic ballistic missiles. At the very beginning of September, it became known that by the 2018 year, the Russian strategic rocket forces would receive a new intercontinental missile. The purpose of this development was the replacement of the obsolete ICBMs of the P-36М2 “Voyevoda” model. By the stated date, the old missiles were planned to be completely decommissioned and disposed of or used to put spacecraft into orbit. In general, the good news, although not without debate about the feasibility of the new project and its optimal appearance.

For the next few weeks, there were no promising ICBMs on the project. But in recent days, the news again went one after another. First, on October 19, Interfax, citing a source in the defense industry, announced the presentation of a draft sketch of a new missile to the Ministry of Defense. The military was generally satisfied, but with some reservations. They demanded that developers correct some unnamed nuances and start preparing a full-fledged project. The main developer of the new rocket became the State Rocket Center named after. V.P. Makeeva (Miass), the Reutov NPO Mechanical Engineering is also involved in the creation of the project. According to available data, the requirements of the Ministry of Defense for the new rocket imply a starting mass of about one hundred tons, the installation of liquid engines and a new anti-missile defense system. Other details of the technical specifications and appearance of the rocket while remain secret. Moreover, at the moment there is no data on the name of the project.

Based on known information, several interesting conclusions can be drawn. For example, lovers of conspiracy thesis can “cling” to the fact that the new rocket for ground use is not made by the Moscow Institute of Heat Engineering, which had previously created the Topol family and the Yars rocket, but by the Mias State Regional Center named after Makeev, who over the past sixty years has been exclusively engaged in the development of ballistic missiles for submarines. From a certain point of view, a change in the lead developer may seem like confirmation for assumptions about the lack of a serious future for MIT due to a number of unsuccessful launches of the R-30 Bulava missile. However, the transfer of a purely “land-based” missile project to an organization that had previously dealt only with marine issues could have a much simpler and more prosaic explanation. The fact is that in recent years, the Institute of Heat Engineering, so to speak, has monopolized the land-based missile industry. Moreover, this fall is expected to adopt the naval fleet a new ballistic missile R-30 "Bulava", thanks to which the development of MIT will serve not only on land. GRC them. Makeeva, in turn, until recently, for a number of reasons, was forced to deal only with the modernization of existing rocketry. In the course of these works, for example, the R-29RMU2.1 “Liner” rocket was created, designed to replace previous R-29 family missiles. However, the Liner is proposed for use on submarines of old projects, and new submarine missile carriers are now being built with the design for the Bulava. Thus, the order to develop a new missile for the Strategic Missile Forces, and not for the fleet, looks like a kind of lifesaver for the famous Ural enterprise.

It is also worth staying at the announced starting mass. The new MBR will weigh about one hundred tons against twice the mass of the planned P-36X2 replacement. The double discrepancy raises certain questions. First of all, they relate to the payload, and not the flight range. Everything is clear with the latter - even a solid propellant rocket with half the weight can have a range over 10-11 thousands of kilometers, as the latest developments of MIT demonstrate. But the head, in turn, is the subject of controversy. If you try to present a promising ICBM as a reduced P-36М2 with corresponding mass-dimensional characteristics, it turns out that it will be able to deliver warheads with a total weight of about four tons to the target. This “calculation” does not pretend to be true and has as its goal only a rough idea of ​​the characteristics of the rocket. Naturally, about any ten warheads, like the "Governor", is no longer in question. In addition, requirements to overcome the enemy's missile defense system hint at the composition of the payload. Probably the new warhead will receive a relatively large number of false targets and warhead simulators. It is obvious that an increase in the number and mass of the breakthrough means will directly affect the size and power of the combat units used. A certain difficulty in trying to predict the composition of the head of the new missile is made by previous domestic ICBMs. Of the latest missiles, the separable warhead is available only on the PC-24 Yars. The Topol family, in turn, carries a monoblock warhead. At the same time, the promising ICBM from the State Rocket Center belongs to the class of heavy missiles, which makes it possible with a high degree of probability to equip with a still divided head part, even if it is more modest compared to the P-36М2.

The appearance of a promising rocket, of course, is of great interest. However, some statements by officials of the Ministry of Defense can make the situation even more curious and even controversial. Almost simultaneously with the news on the approval of the draft design of RIA Novosti, the consultant to the Commander-in-Chief of the Strategic Missile Forces, Colonel-General Retired V. Esin, was quoted as saying. According to him, the production of a new liquid MBR will begin at the end of the current 2012 of the year. In the light of the September statements by the command of the rocket forces, such information can raise many questions. First of all, it is not quite clear how the dates, previously called and called now, are related to each other. If only a preliminary draft has been approved, at best, new missiles will fly after 2014-15. But Esin said about 2012. Most likely, in this case we are dealing with a phenomenon that is commonly called a spoiled telephone. The individual components of the new rocket, which need to be tested in the course of R & D on the topic, may well be made this year, but these are just individual parts and assemblies, and not a complete delivery system. As for the assembly of the entire rocket, this is the case of the next years. SRC them. Makeeva is known for her thoroughness in projects and is unlikely to be in such a hurry.

The picture of the creation of a promising intercontinental ballistic missile of a heavy class that has taken shape in the media has turned out to be quite interesting. To the usual secrecy in such matters and the gradual discovery of the details, an incomprehensible situation with terms was added, which puts the whole picture upside down. The conclusion about the lack of awareness of one of the sources of information suggests itself, but so far there has been no official confirmation or refutation of information about the launch of the rocket construction this year. It remains only to wait for new applications and fresh news. If the assembly work really starts this year, then we will soon be told about them.