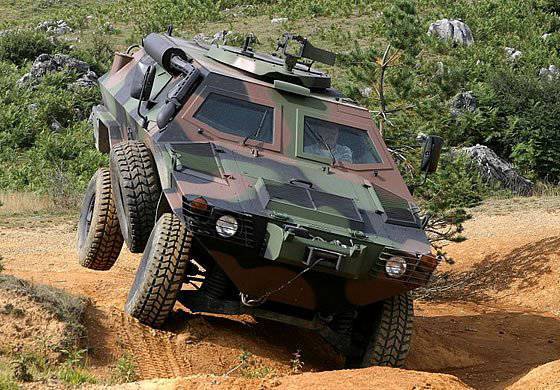 The Otokar company will create an assembly plant in Kazakhstan, the Defense News reports, citing a statement by the largest Turkish manufacturer of armored vehicles.

The Memorandum of Understanding on the joint organization in the territory of Kazakhstan of the production of armored vehicles "Cobra" was signed on October 12 in Istanbul within the framework of the Turkish-Kazakhstan Investment and Trade Forum in the presence of Turkish Prime Minister Recep Tayyip Erdogan and President Nursultan Nazarbayev of Kazakhstan.

The memorandum follows the preliminary agreement signed by Otokar in May for the supply of armored vehicles of the armed forces of Kazakhstan.

Under the new agreement, Otokar will create a joint venture with Kazakhstan Engineering JSC for the production of Cobra armored vehicles with the wheel formula 4х4.

Kazakhstan Engineering will build an enterprise for the production of the Cobra BVM, and Otokar will transfer the necessary technologies and know-how, supply all the components, conduct training of personnel and personnel of the Armed Forces of Kazakhstan, and also monitor the technological process.

Otokar is a privately owned company and, during its existence, has sold over 25 thousand armored vehicles of various types to customers from 30 countries. Moreover, Kazakhstan will be the first state in whose territory the Turkish company creates production for the assembly of its equipment.

Earlier, Otokar delivered a small batch of the Cobra BBM to the Armed Forces of Kazakhstan, which entered service with the 36 airborne assault brigade.

During the next visit to Turkey, the Chairman of the Board of Kazakhstan Engineering Bolat Smagulov also discussed with the leadership of the company Aselsan Electronics the implementation of joint projects for the production of optical instruments in Kazakhstan.

In addition, representatives of Kazakhstan Engineering held talks on possible areas of cooperation with the Turkish shipbuilding companies RMK Marin and Daersan.

Earlier, a delegation of “Kazakhstan Engineering” headed by Bolat Smagulov visited Turkey on September 10-11 and on 28-29 in May of this year. As reported, during negotiations with the Deputy Minister of Defense Industry Murad Bayar, as well as the leadership of the Otokar company, the possibility of cooperation in the field of defense and the organization of production of armored vehicles in Kazakhstan was discussed.

In May, Kazakhstan Engineering and Aselsan Electronics signed an agreement to expand the strategic areas of cooperation. In accordance with the document, the parties intend to develop cooperation in the field of upgrading armored vehicles and helicopters. In addition, the companies plan to establish a joint production of military radio stations and communication systems. The agreement will allow expanding the line of products of the joint venture LLP Kazakhstan Aselsan Engineering in the interests of the Armed Forces of Kazakhstan with the prospect of export to neighboring countries.

Judging by the large number of programs listed above, on which agreements have already been reached or negotiations are under way, Turkey (a country belonging to NATO) expects to reach the level of a strategic partnership in the field of military-technical cooperation with Kazakhstan.

At the same time, Kazakhstan is a member of the CSTO. One of the principles of military construction in the framework of the CSTO is the unification of weapons of countries belonging to this organization.

Most recently, on October 9, Russian Defense Minister Anatoly Serdyukov held a working meeting with Kazakhstan’s Defense Minister Adilbek Dzhaksybekov. The parties discussed, among other things, the implementation of the strategic partnership and interaction plan, approved by the defense ministers of the two countries in March 2011.

Among the main areas of interaction was the creation of a unified air defense system.

The meeting also discussed a set of problems related to the strengthening of military and military-technical cooperation within the CSTO, including the creation of the CSTO Military Committee and the improvement of the procurement system of weapons and military equipment in the interests of the Organization's member states.

It should be noted that outside the countries in the post-Soviet space, Turkey is not the only state with which Kazakhstan actively cooperates in the field of military-technical cooperation.

Kazakhstan has joint programs with Israel on the CAO, mortars and MLRS.

The United States of the Armed Forces delivered Kazakhstan as part of military assistance to the 75 BBM M-1114 HMMWV and XHUMX UH-8H Hugh helicopters.

Negotiations are ongoing with South Korea for cooperation in the field of naval equipment.