October 25 2012
2
As you know, the United Kingdom in the twentieth century experienced very great difficulties with firearms weaponsthat continues to this day. It is not clear how in this country barely living specimens are being put into service, which need to be modernized and modernized so that they become at least partially acceptable. Of course, there were exceptions, but on the whole, the situation was and remains rather sad. But this was by no means always, by the late nineteenth - early twentieth century, everything was much better, and here is one of the clearest examples of that time - the double-barreled gun of William Gardner. 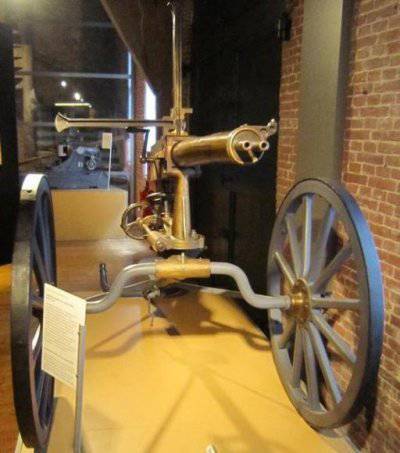 No one, I think, will argue that a machine gun is a very convincing weapon for the enemy, and even more so at the time when automatic fire was implemented only in this type of weapon - a machine gun, then its presence on the battlefield could radically change the outcome of the battle. Therefore, it was precisely machine guns that paid quite a lot of attention from the designers, because the military would be interested in a particularly successful model, which would mean getting a fairly large amount of money for its development. Of course, the first machine guns were completely different designs than the modern ones, they did not have the highest rate of fire and required several people for their service and control. William Gardner proposed the design of a machine gun, which at that time had a higher rate of fire than its counterparts, and only two fighters could control the weapon. In addition, the design of the machine gun was outrageously simple and reliable, easy to manufacture and made the weapon a penny in general with sufficiently high characteristics.

The Gardner machine gun of the 1874 model of the year had two barrels, the fire from which was carried out alternately, the principle of operation of the weapon was based on a mechanical trigger mechanism, driven by rotation of the handle on the right side of the weapon. To cool the trunks were sealed with a sealed casing, where water was poured, the rate of fire of this unit was 250 shots per minute. Weapons could be strengthened on different machines, but they all had one thing in common - guidance was carried out by turning the knobs, pointing, which was not very convenient and did not allow the weapon’s fire to move freely at high speed, however, with good skill of machine-gun crew quite possible.

The high rate of fire at that time was ensured by the presence of two valves, for each barrel separately. So, when, in the process of rotating the knob, one shutter retreated backward, the second moved forward and a shot occurred, then the shutters changed places. In general, the machine gun’s rate of fire completely depended on how fast the machine gun handle was turning, but the optimal rate of fire was in 250 shots per minute, as it was possible to shoot with it practically without interruption until the gun barrels became unusable. Since the automatic machine gun did not work on powder gases, the rate of fire did not actually affect its reliability, the maximum rate of fire from this machine gun could reach 800 shots per minute, but the trunks instantly overheated and the water boiled. 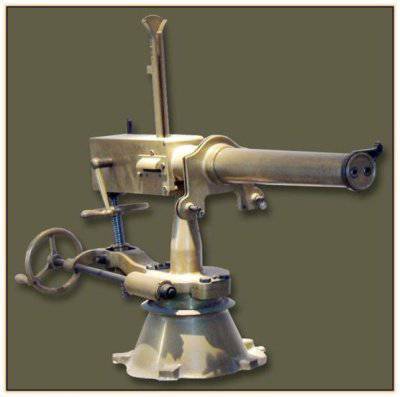 Unfortunately, in the USA, the designer’s development was not appreciated, or rather, evaluated, but at that time Gatling machine guns were in service. And although the company, in which the designer worked, managed to sell several hundred machine guns, this gunsmith obviously did not suit. Therefore, he moved to England, where he continued to improve his weapons and as a result made him one of the main types of machine guns of Great Britain at that time. However, it can be said that the gunsmith was fixated on his development, since he had options for machine guns and, in general, stillborn ones. For example, a five-barreled machine gun with an 700 firing rate per minute with air-cooled barrels. It seems to be a good weapon in all respects, but it was only because of the gutters that received ammunition that it was very difficult to conduct aimed fire, not to mention controlling the flow of ammunition even by two.

A variant of the double-barreled machine gun of the 1874 model designer of the year had a mass in 98,9 of a kilogram, a length in 1193 of a millimeter with a length of barrels of 763 of a millimeter. Ate cartridges .45 caliber, which allowed the use of weapons at distances to 1800 meters. Unfortunately, there is no exact data on the machine gun ammunition, which, however, does not prevent us from imagining what kind of ammunition it was, given the effective range of the weapon.

Of course, this model of the machine gun didn’t make a revolution in the world of weapons; nevertheless, it was made according to an automation scheme with a very short life, but the fact that this machine gun certainly deserves to be known and remembered, personally by no means not questioned. And in general it is useful to know about such a weapon, albeit it is different from the modern one, but it became the basis for it. And how sometimes it is pleasant to see the automatic weapon system “of which there are no analogues in the world”, but which was once used in some forgotten unpredictable sample of weapons. Which did not spread either because of the lack of advertising, or because of the complexity of production, or simply because the production of that time could not provide the required quality for trouble-free operation of weapons. And most often it turns out that the new is well forgotten old. 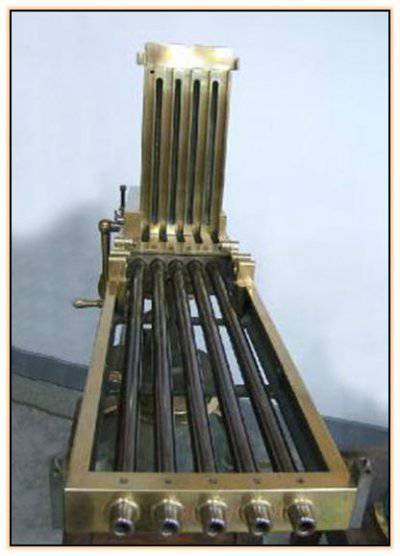