Syrian autumn and the plans of the aggressors

October 22 2012
51
The end of October, 32 degrees of heat ... Damascus heated by the sun, in which the real autumn has not yet arrived ... But much more evil has come. And the old, from the time of the Roman Empire, the gate on Bab Tum Square on 11 in the morning a powerful explosion thundered. As a result, 13 people died, 29 were injured. All - passers-by. The terrorists chose a time when they were crowded on the square to commit their crime. 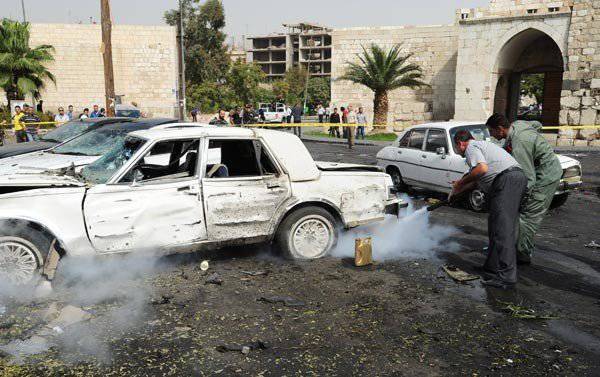 The ancient gates survived, and modern buildings suffered. Crumpled cars stand lonely, many of which have turned into a pile of helpless iron ...

A year has passed since that tragic day, when "American democracy" declared its final victory in torn bombing and Libya's war, when humanity was shocked unprecedented terrible shots monstrous massacre of the legitimate Libyan leader Muammar Gaddafi and his son Mutassim and a pack of traitors who call themselves supporters of the so-called "Transitional National Council", triumphed on the streets of Tripoli and Misurata. Have there been any improvements in the lives of the Libyan people this year? Just the opposite. Libya celebrates the anniversary of this monstrous murder - one of the most brutal political assassinations in the world - with new fights and new victims. There is an assault on the city of Bani Walid, which remained loyal to the Jamahiriya, its defenders shed their blood again. There is no longer a prosperous and peaceful state with such social guarantees that Europeans and Americans never dreamed of ...

Exactly the same result want to achieve "democratizers" in Syria. Similarly, they want people not to engage in peaceful work and creation, but to endlessly kill each other. And all this - in the name of the monstrous plans of overseas players who want to reshape the Middle East according to their own drawings, in order to gain control over the resources of the region. Someone is dying in wars and terrorist attacks - and someone is rubbing their hands in the hope of counting new profits ...
Lovers to profit from the blood of others are inciting the war not only in Syria, but also in Lebanon. In the Christian district of Beirut, Ashrafia thundered. 8 people died, several dozen were injured. But bad luck - among the dead was one of those who faithfully serve the Western masters, an associate of Saad Hariri Wissam al-Hassan.

And immediately the organizers of the attack began to blame him for Syria. Hariri supporters are rioting and bloody clashes on the streets of Beirut. According to unofficial data, several Syrian workers have fallen victim to the pogromists of Al-Hariri. A number of attacks on pro-Syrian party offices were carried out. Violent "demonstrators" even tried to storm the building of the Lebanese government, but were repulsed by the police.
Saad Al-Hariri and the political movement Al-Mustaqbal and the March 14 Coalition in the Lebanese Parliament headed by him are the main anti-Syrian forces in Lebanon. A few years ago, Saad Al-Hariri played a major role in quarreling the Allied Syria and Lebanon. Then, as a result of the actions of these forces and the West that supported them, the Syrian army, which had a peacekeeping role in Lebanon, returned to Syria. The reason for this was the murder of Rafiq Al-Hariri, the father of Saad, in which, without any investigation and investigation, the Syrian side was appointed guilty. Although both in Damascus and Beirut they say that Saad Al-Hariri himself was involved in this murder.

Throughout the crisis in Syria, this trend has helped the Syrian fighter-destroyers. Recently, the role of a certain Ukaba Sakr, al-Hariri’s associate and a deputy from his faction, who constantly plying between Qatar, Turkey and Saudi Arabia, coordinated the actions of Syrian terrorists and took an active part in their arming, was exposed. Recently, this Sakr was injured in Turkey as a result of fights between militant groups that did not divide the money and weapon and on a private plane Hariri was flown to Paris.

But now the fascist “March 14 Coalition” has little fire in Syria. Now these raging rioters want the fire spread to Lebanon.
Of course, not alone is Saad Al-Hariri doing all this. This is all included in the plans of the United States and NATO countries to further destabilize the region.
At this time, Mrs. Clinton again discusses with her colleagues in NATO member countries the possibility of introducing a no-fly zone over Syria.

The “no-fly zone” is a euphemism, meaning the bombardment of peaceful cities, the shedding of the blood of children and women, the destruction of hospitals, schools, children's creative houses, libraries, buildings of national media and everything that gets under the arm of the aggressor. More precisely, under the wing ... We have seen it in long-suffering Libya.

French Foreign Minister Fabius replied to Mrs Clinton that there must be serious legal grounds for the introduction of the no-fly zone. That is, the UN Security Council resolution. France makes extremely contradictory statements on the Syrian issue. Either some officials are in favor of a “no-fly zone”, while others are starting to talk about “legal grounds” for such a step. France “wants and chokes” - she, on the one hand, is ready to plunge her teeth into the recalcitrant country, which once broke free from her colonial power, and on the other hand, she is afraid of getting herself “in the teeth.”

During the Libyan “no-fly zone”, it was France that claimed responsibility for pushing through this decision, which cost Libya enormous sacrifices. And Sarkozy, who has not yet incurred legal responsibility for this war crime, has already incurred political responsibility - the people refused him confidence. The new president of France, Francois Hollande, perhaps takes into account the sad experience of Sarkozy. This pseudo-socialist has an appetite for Syria, but he wants someone else to be the first. Syria is surrounded by drooling predators, each of whom froze in anticipation - who is the first ...

This role is being pushed by Turkish Prime Minister Erdogan. But he, apparently, is also afraid of being the first. So, having committed an act of air piracy in relation to the Syrian airliner, on which Russian citizens were flying, he suddenly lowered his tone and retreated from his previous statements that there was supposedly a prohibited cargo on board. The Turkish side, after some diplomatic steps by Russia, was forced to admit: the cargo on the plane was legal. There was nothing forbidden there. Claims of the Turkish side now - only to documents on the goods.

It is worth Russia at least once to make a decisive statement - and the enemies are backing down. So maybe our Foreign Ministry would have to make such statements more often? And accompany them with decisive steps?

And in the wounded Bab-Tuma Square, covered with blood, there are wreckage of buildings and parts of cars destroyed in the terrorist attack, as a sad reminder of what the aggressive plans of international businessmen lead to ...