In the case of the in-complex modernization of the anti-aircraft missile system, the main improvements concerned the anti-aircraft missiles and control equipment themselves. To the complex with B-601 Dahlia missiles, the name “Wave-M”, with B-601M - “Wave-N”, with B-611 - “Wave-11”, with enhanced noise immunity - “Wave-P”. Volna-P ADMS was adopted in 1976. The “Volna-P” jamming was provided by increasing the noise immunity of the missile radio channels, as well as introducing the optoelectronic target tracking channel into the control system. “Wave” in the 9's It became known as a strike anti-aircraft missile system (UZRK), it allowed to conduct rocket fire at surface targets.

Subsequently, when the issue of protecting ships from low-flying anti-ship missiles was raised, they conducted another modernization of the complex (Volna-N), which used B-601M missiles. The upgraded complex ensured the destruction of targets at a height from 3 to 5 meters above the crest of a wave.

The M-1 complex, despite the presence of individual flaws, was generally successful and was widely used in the Soviet Navy, and is still in service.

The composition of the universal missile system M-1 Wave

Launchers were placed on the roof of the superstructure in the bow (52,5-th frame) and stern (204,5-th frame). The ZIF-101 installation was an open, twin, stabilized stand with a lower suspension of two rockets on two guide beams. The rocket ammunition cellars (No. 8 - aft and No. 4 - bow) with a drum storage system had a pair of vertical drums on the 8 SAM (anti-aircraft guided missiles) each. The rocket to the loading line was fed by turning the drum to 45 °, and the mechanical loading was carried out by a chain ramming pusher. The operation of the launcher was provided by remote control and electric power drive ESP-101. Standard equipment of the rocket cellar - 1 training and 15 combat missiles. Serial production of the ZIF-101 launcher was established in Volgograd at the Barricades factory. 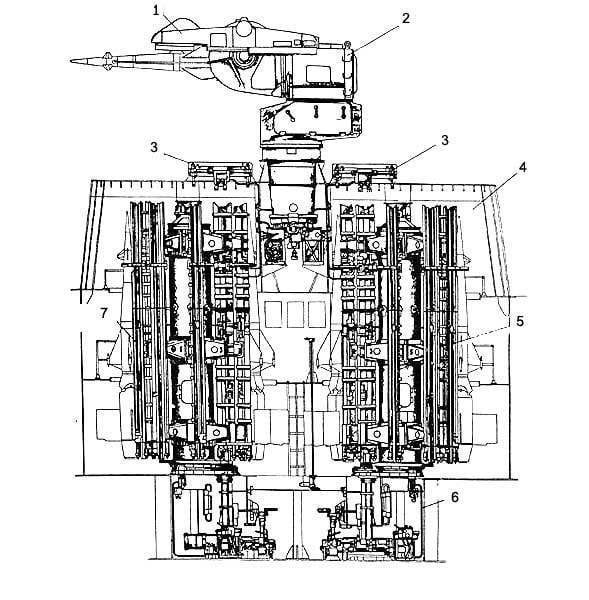 Following the launcher, the ZIF-101 created a paired installation of the ZIF-102. The main difference between the new launcher was in the missile delivery system used - instead of the drum one, a conveyor feed was used. As a result, the ammunition of one launcher increased to 32 missiles.

B-600, as well as its later versions, is a two-stage rocket with a powder engine, made according to the aerodynamic configuration of a "duck". The first stage was supplied with four stabilizers, opening after the start, and a jet powder engine PRD-36. The engine is equipped with 14 cylindrical powder checkers (made from NMF-3K powder) with a total mass of 280 kg. The engine of the second stage - 125-kilogram piece of gunpowder NM-4Sh. High-explosive fragmentation warhead 4-90 equipped with ready-striking elements. The total mass of the warhead is 60 kilogram, of which 32-33 kilogram is the mass of TNT and hexogen. The Strait radio fuse (ind. 5Е15) is triggered by 58 slips. The warhead of 4-90 gives 3560 - 3570 splinters, whose average mass is about 5,4 grams. Self-canceler response time - 26 seconds. 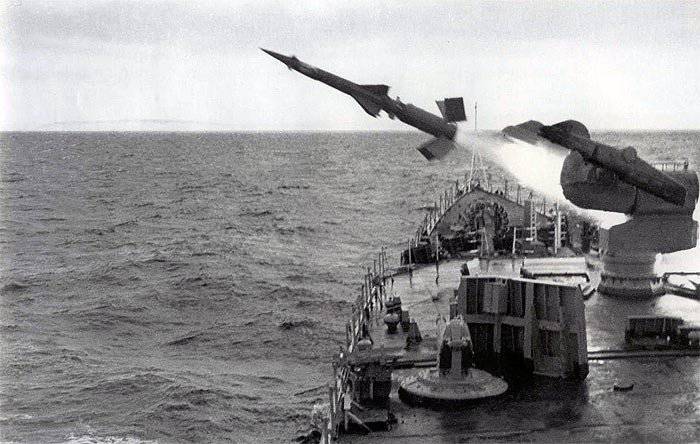 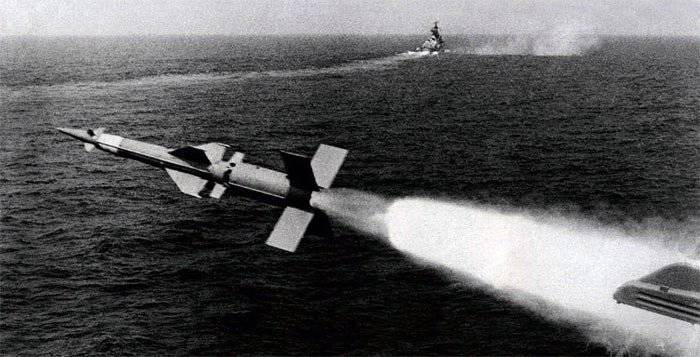 The method of guidance is the optimal straightening and covering. When firing at low-flying targets, the “Hill” guidance method is added to these methods.

The shooting control system "Yatagan" was developed by SRI-10 GKRE, the equipment of the antenna post drives - TsNII-173. "Yatagan" is a set of devices and instruments that provide reception and target designation from the radar of the ship detection, tracking of missiles and targets on a trajectory, prelaunch preparation and launch of missiles, development of rocket control commands. The missile was guided along the radar beam until the moment when the radar fuze was triggered. The disadvantages of this radio command system are single channel and a sharp decrease in accuracy with increasing distance. 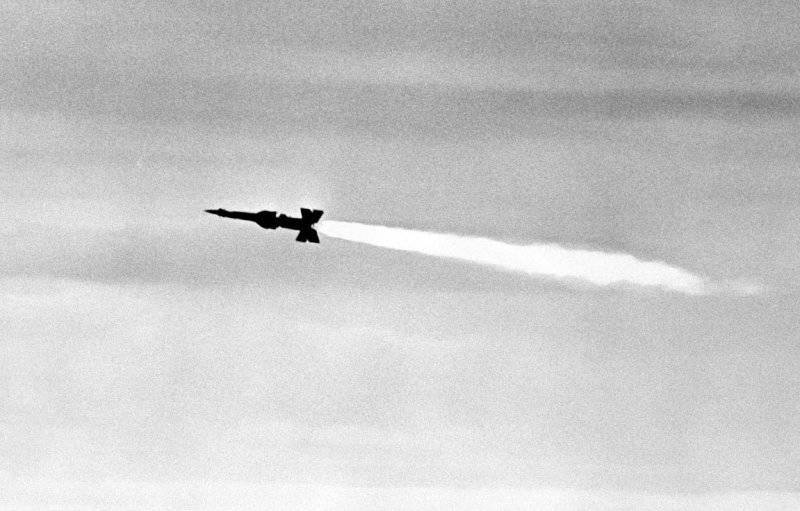 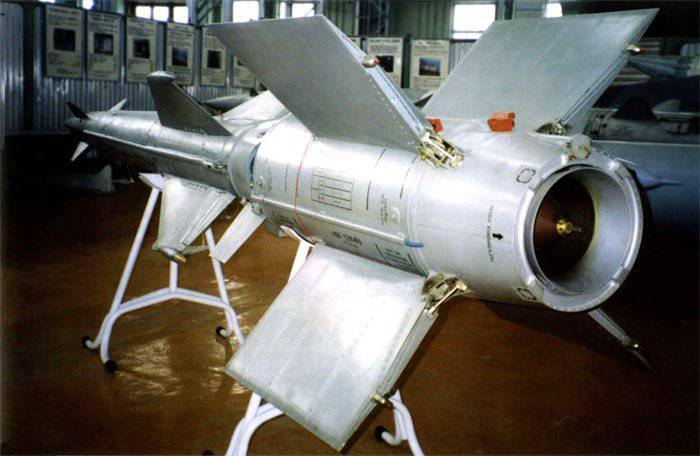 Each antenna post "Yatagana" had five antennas. Two small antennas carried out the so-called “coarse” missile guidance, one antenna worked as a radio transmitter of the operator’s commands, and two large antennas accompanied the target and took the rocket to it with greater accuracy. Until the first target is defeated, the struggle with subsequent targets is impossible.

Testing and operation of the universal M-1 Wave missile system

M-1 "Wave" timeline was ahead of the delivery date of the lead ship of the 61 project, factory number 1701 (CKR-25, Komsomolets Ukrainy with 9.10.62), in connection with which the joint testing of the Council of Ministers of the USSR No. 2110 from 30 July 1959 of July M-1 transferred to the rocket ship "Bravy" project 56K. The tests were carried out in two stages - the first from January 05 to March 12 1962 g .; the second from 12 March to 30, April 1962 g. During the tests it was noted that 5 minutes are required for the Yatagan to exit the cold position, the target tracking distance is 42 kilometers with a probability of capturing 0,50 and 36 kilometers with a probability 0,8. The range limits are 15 kilometers, the response time of the missile self-destruct is 26 seconds.

During the tests, the 6 aircraft of the MiG-15M target aircraft, which moved from 600 to 10000 m, were shot down, missiles miss at that were 9 - 48 m. According to the commission, the probability of hitting the target on the 40 meters miss is 0,4-0,6, and on the slip 20 m - 0,9. With the help of the M-1 complex, a target flying at speeds up to 600 meters per second could be destroyed. The target can maneuver with 3 overloads - 4 g at altitudes up to 4 thousand meters, and 2 - 3 g - at high altitudes. The speed of the ship during launch can be up to 36 knots. Shooting with "Bravo" on the surface targets were not carried out.

Complex M-1 according to the results of tests on the "Bravo" was recommended for adoption.