How and why did Soviet commander Mikhail Frunze die? 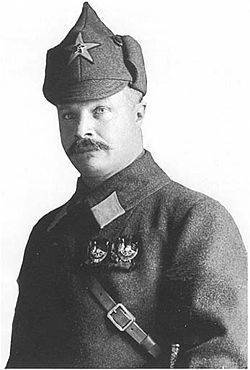 85 years ago, Mikhail Frunze died on the operating table. Disputes about whether the famous military leader was stabbed to death by doctors or whether he died in an accident have not subsided to this day. Mother Frunze was sure that her son was killed, her daughter thinks differently ...

"Mikhail Frunze was a revolutionary to the core, he believed in the firmness of Bolshevik ideals, - says Zinaida Borisova, head of the Samara House-Museum M.V. Frunze. - After all, he was a romantic, creative kind. Even the poems wrote about the revolution under the pseudonym Ivan Tomb: “... the young ladies will drive the cattle to the deception of the women duped by the goddess - the godless merchant. And a lot of effort will be wasted, the blood from the poor will increase the cunning trader ... "

“Despite his military talent, Frunze shot a man only once - at the constable Nikita Perlov. More weapon he could not direct to a man, - says Vladimir Vozilov, candidate historical Sciences, Director of the Shuya Museum named after Frunze.

One day, due to the romantic nature of Frunze, several hundred thousand people were killed. During the hostilities in the Crimea, he had a beautiful idea: “And what if to offer white officers to surrender in exchange for pardon?” Frunze officially addressed Wrangel: “Whoever wants to, will leave Russia without hindrance.”

“At that time, about 200 of thousands of officers believed in the promise of Frunze,” says V. Vozilov. “But Lenin and Trotsky ordered them to be destroyed.” Frunze refused to execute the order and was removed from the command of the Southern Front. "

“These officers were executed in a terrible way,” continues Z. Borisova. “They were built on the seashore, each one was hung around a neck and shot in the back of the head. Frunze was very upset, fell into depression and he almost shot himself. ”

In 1925, Mikhail Frunze went to a sanatorium to treat a stomach ulcer that had tormented him for almost 20 years. The commander was happy - gradually he was getting better.

“But here the inexplicable happened,” says historian Roy Medvedev. - The council of doctors recommended going for an operation, although the success of conservative treatment was obvious. Stalin added fuel to the fire, saying: “You, Mikhail, are a military man. Cut out your ulcer finally! ”

It turns out that Stalin gave Frunze such a task - to lie under the knife. Like, solve this question as a man! There is nothing to take the bulletin all the time and go to a sanatorium. Played on his vanity. Frunze began to doubt. His wife later recalled that he did not want to lie on the operating table. But he accepted the challenge. A few minutes before the operation said: "I do not want! I'm already all right! But Stalin insists ... ” By the way, before the operation, Stalin and Voroshilov visited the hospital, which indicates that the leader was following the process.

Frunze gave anesthesia. Chloroform was applied. The commander did not fall asleep. The doctor ordered an increase in the dose ...

"The usual dose of such anesthesia is dangerous, and an increased dose could be fatal, - says R. Medvedev. - Fortunately, Frunze fell asleep safely. The doctor made an incision. It became clear that the ulcer had healed - there was nothing to cut out. The patient is stitched. But chloroform caused poisoning. For the life of Frunze 39 fought hours ... In 1925, the medicine was a completely different level. And the death of Frunze was written off in an accident. ”

Frunze died on October 31 1925, he was solemnly buried in Red Square. Stalin in a solemn speech sadly lamented: “It’s too easy for some to leave us.”. Historians, to this day, are debating whether the famous commander was stabbed to death by doctors on the operating table by order of Stalin or died in an accident.

"I do not think my father was killed- Tatiana Frunze, the daughter of a famous military leader, admits. - Rather, it was a tragic accident. In those years, the system has not yet reached the point of killing those who could prevent Stalin. Such things only began in the 1930's. ”

"It is entirely possible that Stalin had thoughts of getting rid of Frunze, - R. Medvedev considers. - Frunze was an independent man and more famous than Stalin himself. And the leader needed an obedient minister. ”

"The legend that Frunze was stabbed to the operating table by order of Stalin, was launched by Trotsky, - sure V. Vozilov. - Although mother Frunze was convinced that her son was killed. Yes, the Central Committee was then almost omnipotent: it had the right to insist that Frunze go on an operation and forbid him to fly on airplanes: aviation the technique was then very unreliable. In my opinion, Frunze’s death was natural. By the age of 40, he was a man deeply ill - advanced tuberculosis of the stomach, peptic ulcer. He was brutally beaten several times during arrests, during the Civil War he was shell-shocked by a bomb. Even if there had been no operation, most likely, he would soon have died himself. ”

There were people who blamed for the death of Mikhail Frunze not only Stalin, but also Clement Voroshilov - after all, after the death of a friend, he received his post.

"Voroshilov was a good friend of Frunze, - says R. Medvedev. - Subsequently, he took care of his children, Tanya and Timur, although he himself already had a foster son. By the way, Stalin also had an adopted son. Then it was common: when a prominent communist leader was dying, his children went under the care of another Bolshevik. ”

"Kliment Voroshilov was very concerned about Tatiana and Timur, - says Z. Borisova. - On the eve of World War II, Voroshilov arrived in Samara in our museum and presented a dirk to Timur in front of a portrait of Frunze. And Timur swore that he would be worthy of the memory of his father. So it happened. He made a military career, went to the front and died in 1942 in the battle. ”