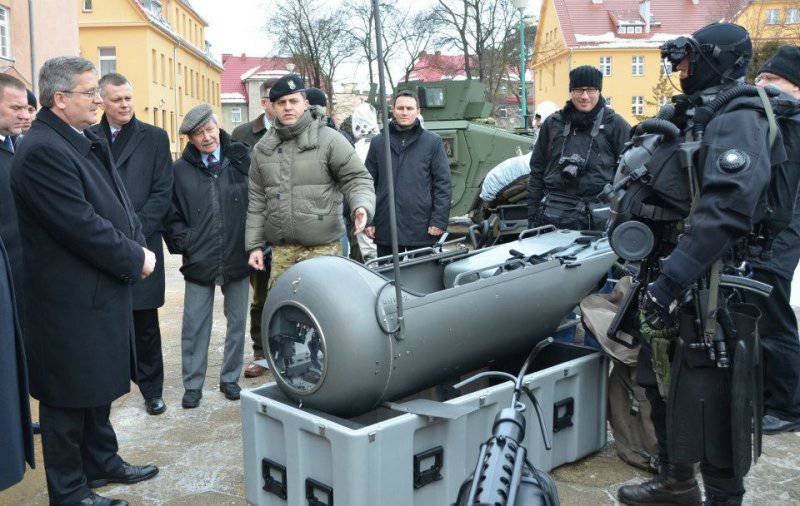 Until the end of the 80 of the last century, Poland was an active member of the Warsaw Pact. And now, Poland is a state that is one of the most active members of the North Atlantic alliance. In 2008, special operations forces were created there, which became part of the armed forces. In the MTR are such units as the group "Thunder", the 1-th special regiment of the commando, and directly the special forces of the marine special forces "Formosa".

Long period division of the Polish fleet It was classified, but now it is already possible to find some materials, and thanks to them, to learn in more detail what kind of unit it is, what its goals and objectives are, what structure it has and in what operations it took part.

Maritime special forces began its existence in 1973, when an order appeared, signed by the head of the Polish Navy headquarters about the need to create a research team to form a division of light swimmers. One of those who actively supported the creation of a maritime special unit was the captain of the Polish Army Sigmund Zavadsky. As a result, in Gdynia, on the basis of the training of divers, a group was created, headed by Captain Joseph Rembiz. It consisted of nine people. Three years later, in 1976, a special operations unit (abbreviated as WDS) was formed in the structure of the flotilla of strike ships, in which there were only 6 people: a commander, two specialists and three senior assistants. The department subordinated a special unit, a section consisting of a commander, boatswain (sergeant), command and control groups and 3 combat groups.

The composition of the combat groups consisted of six divers: commander, deputy, radio diver and three divers. The control group also included a 6 man and a SMK-75 M boat. The total number of the special unit was 35 military personnel. At the same time, when the special operations department was created, the research team was abolished. And in order to achieve complete secrecy, the special department according to the documents was held as a department of divers of the third flotilla of strike vessels. 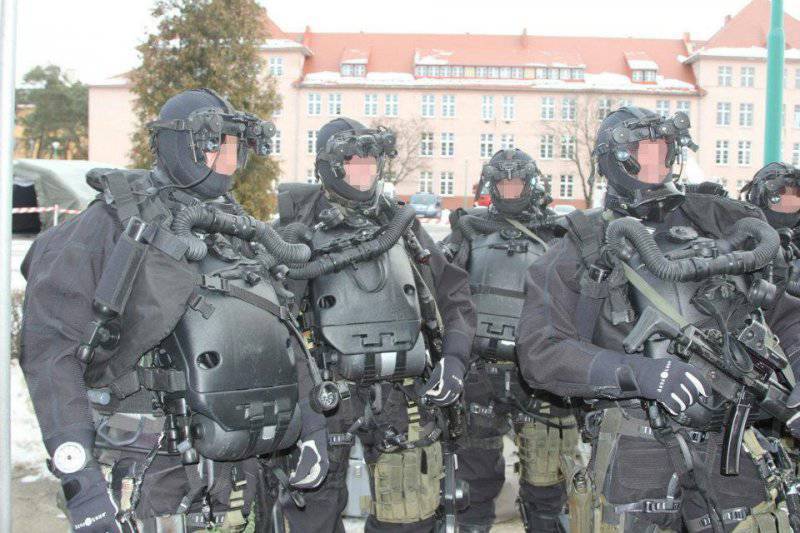 For a long time the number of the department remained unchanged. It was assumed that in the future a division would be created on its basis, in which three special sections would be formed, with three combat groups in peacetime (in wartime — five) in each. The total strength of the division was planned at the level of 90 troops in peacetime and 150 - in the military. But, as it turned out, these plans were not implemented.

The only thing that has changed is the structure of the department. After the reorganization, it included three combat groups, as well as operational and technical support units. The number of personnel was equal to 36 military personnel, among them were both soldiers under the contract (the majority) and conscripts.

At the end of 1990, some changes took place in WDS. According to the order of the commander, the department of special operations was reorganized into two groups: special and technical support. The command of the group fell under the command of the marine hydrographic group, which was part of the naval reconnaissance group in 1992. At the end of the century, in 1999, Poland became a member of NATO, which had a significant impact on the development of special forces. In 2002, the department received a newer name. From then on, they began to call him the diving section of special operations. However, this did not last long, and two years later, in 2004, the section was renamed again. She received the name of a group of special divers.

After joining NATO, when the partners in the bloc began to have a great influence on the country's military-political leadership, the purpose of the unit changed slightly. In particular, new functions have appeared: some battle groups began to be used not only for reconnaissance, but also for carrying out sabotage missions. By the same time, the beginning of the use of modern technology and equipment. For underwater work began to use underwater towing, while for operations on the water - inflatable boats. In addition, at the disposal of divers appeared and modern parachuting equipment, which made it possible to jump in diving equipment on the water. In addition, military exercises were conducted with the involvement of helicopters used to drop diving groups. The beginning of close cooperation with WDS not only with Polish, but also with foreign special units should be attributed to this same period of time.

In October, 2006, in the composition of the same number, three special groups of divers reappeared in the WDS.

In the summer of 2007, the unit was excluded from the naval reconnaissance group and included in the structure of the maritime special operations group. A few months later, in September, according to the order of the Minister of National Defense, appropriate changes were made regarding the procedure for subordinating units of the naval special forces. In 2008, the maritime group of special operations was expelled from the Navy and transferred to the direct control of the commander of the special forces. In 2011, the group was given the official name Formosa. Until that time, this name was unofficial. It originates from a military training center in which Vietnamese servicemen underwent an internship in 60's, who invented this name. Due to the wide popularity of the group for precisely this name, the command decided to legalize it. In 2011, Darius Vishnyarek assumed command of the group. 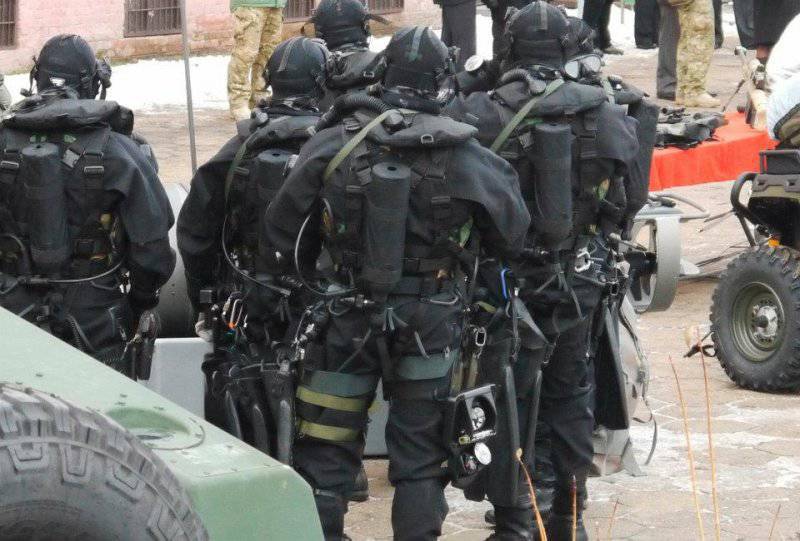 The main task of "Formosa" today is to conduct special operations in peacetime, as well as in times of crisis and hostilities. The group can carry out its activities not only under water and at sea, but also in coastal areas. In addition, Formosa divers often work in conjunction with the Thunder marine unit, commando regiment divers, as well as naval divers of the North Atlantic alliance. The unit is primarily attracted to participate in operations to protect the borders of the state. In 2002-2003, Formosa secured the Polish ship Xawery Czernicki in the Persian Gulf. In addition, divers are trained to conduct actions on land and in the city.

It should be noted that the group has its own traditions and combat experience. It can be said that this unit has a typical organization for MTR, good equipment and weapons, and highly professional personnel. The command regards special naval forces as an unconventional type of forces that are intended to conduct a certain type of activity. That is why Formosa is most often attracted in cases where it is not possible to use conventional armed forces, or else their use is undesirable due to certain military-political, operational and technical circumstances.

The basis of the group consists of a pair of divers, which provide cover for each other. Three such pairs form a special group, and the squad already consists of five pairs of fighters. Preparation lasts three years. In the first year of study, skills of shooting, swimming long distances, increasing foreign language skills and driving skills are practiced.

If in the first years of its existence, the group was almost completely staffed with conscript soldiers, now Formosa is an extremely professional unit, which makes it possible to increase its potential and effectiveness during operations.

Each spring, candidates are selected for the division.

In the course of the selection, the physical condition of the candidates is checked. It is carried out on sports equipment, and takes two days. In this case, the tests can be, both on land and in water and under water. Pulling up, wrestling, climbing a rope (5 meters), running 3 kilometers, push-ups, swimming free style (50 meters and 400 meters; for those applying for positions in the headquarters - 200 meters), as well as scuba diving (25 meters and 15 meters). In the event that a candidate receives at least one unsatisfactory grade during testing, this automatically excludes him from the number of applicants for the vacant position in the group. It should also be noted that the verification of candidates depends on what position they are applying for.

The second stage of selection includes testing of resistance to high psychophysical loads in the field. Usually, this stage is carried out in the mountains for 6 days. Among the tests of this stage, we can mark a march in order to test the endurance and ability of orientation to the terrain. At the same time, various strength exercises are performed during the march. In addition, during the second stage, the degree of adaptation of candidates to the team and various conditions is also checked. For those who apply for positions in the headquarters, the second stage is the final one.

But even in case of successful completion of the qualifying round and the presence of a positive conclusion of the commission, the factors that are mandatory conditions for admission to the "Formosa" does not necessarily follow the immediate appointment to the post.

As a rule, during the selection, preference is given to those fighters in whom ambition, lack of fear of difficulties, a high level of knowledge and skills in various fields, high stress tolerance, highly developed intelligence, endurance are clearly visible.

In addition to these factors, candidates must meet other requirements. So, in particular, they should have no problems with law and convictions, be either a professional soldier or be in reserve, have a secondary, and even better - a higher education, have a medical opinion about fitness for work and no contraindications to heavy physical exertion.

Those of the candidates who apply for the positions of combat swimmers should have a certificate called “Non-Storm”, which says that a person has no contraindications to parachuting and scuba diving.

Candidates who meet all requirements can apply for participation in the selection. Relevant addresses are posted in the media and on special sites.

The training of those fighters who successfully passed the test will continue throughout the year. It provides for the development of a special course and mastering the skills of actions in special operations. In addition, classes are held on scuba diving, training in hand-to-hand combat, parachuting. At the same time, much attention is paid to practicing tactics of actions in the water and light-diving training. After completing this course, fighters are sent to specialized courses and foreign language courses. Only after that fighters are distributed into groups, where they continue to improve their skills.

If we talk about the Formosa weapons, it consists of various types of small arms weapons, both Soviet-made and Western. Among the short-barreled weapons, the group's fighters prefer the Beretta 92 and SIG-Sauer P226 pistols in 9 mm caliber. In addition, the PM84 Glauberg, Luger / Parabellum, Heckler & Koch MP5 N and MP5 A3 are also used.

In addition to these types, machine guns of Kalashnikov caliber 7,62 millimeter, which is the world recognized leader in this class, are also used.

The group also uses the Soviet-made RPG-7 anti-tank grenade launchers, however, for the G36 rifle, the H&K AG-36 is used as an under-barrel grenade launcher, which is equipped with a special butt, and therefore can be used separately from the rifle. Polish snipers still use the SVD.

Over the years of its existence, Formosa took an active part in a large number of search and rescue operations, and besides, it provided protection for prime ministers, presidents, and even the king.

Since 1994, the group has been actively cooperating with the special forces of Germany, the United States of America, France, and the United Kingdom. They took part in special operations in Afghanistan and in the waters of the Persian Gulf. At the moment, Formosa is recognized as one of the best special-purpose units in Poland.