A few days ago, a previously unknown unmanned aerial vehicle was seen for the first time in the zone of the Special Operation. The product marked "Geran-2" and alphanumeric tail number was used by Russian troops on the Ukrainian object. So far, nothing is known about this drone, and the lack of information contributes to the emergence of the most daring and interesting versions.

On September 13, curious photographs taken by Ukrainian formations in the area of ​​the city of Kupyansk were distributed on social networks and specialized resources. They depicted the wreckage of some unknown UAV, previously not seen in the zone of the Special Operation. Two swept half-wings with keel tips, an electric motor and small debris hit the lens. The keels bear the number "M214" and the name "Geran-2".

The Ukrainian side claims that this UAV flew over its positions and was shot down. However, the nature of the damage shown by the wreckage refutes this version. Apparently, "Geran-2" was loitering ammunition and attacked the Ukrainian object. When hit, the warhead detonated and the structure was destroyed with the formation of characteristic debris.

A curious version about the origin of the new Russian UAV immediately appeared. So, it is assumed that the Geran-2 product is a localized or simply renamed version of the Iranian Shahed-136 loitering ammunition. This version is supported by the external similarity of the main elements of the airframe and known information about the power plants.

In addition, the version about the Iranian origin of the new UAV is consistent with previously published information. Over the past few weeks, rumors have been circulating at the suggestion of the foreign press about a possible purchase of Iranian drones for the Russian army. Accurate information on this subject is not yet available, but circumstantial evidence is provided.

It was reported about the visits of Russian specialists to Iranian enterprises and bases. Then Iranian transport planes repeatedly flew to Russia with unknown targets. Not so long ago, a representative of the Iranian command said that Iranian products are supplied by one of the major countries. Now, debris from near Kupyansk is also being considered as evidence of Russian-Iranian cooperation.

What exactly the drone / loitering ammunition "Geran-2" looks like is not yet clear. However, photographs from the Ukrainian side allow us to determine some features of its appearance, as well as make assumptions and conclusions. In this case, the characteristics of the device cannot be determined. The composition of the unmanned complex and its capabilities will also remain unknown.

Drone electric motor
Judging by the largest fragments, the device "Geran-2" was built according to the "tailless" scheme. It is likely that a cylindrical or spindle-shaped fuselage is used, connected to the wing for most of its length. A delta wing of large sweep was used. The entire rear edge is given under the steering surfaces. Road stability is provided by two fins-keels. There are no rudders on them. The dimensions and weight of the product cannot be estimated due to the lack of clear reference points.

"Geran-2" uses an electric power plant. There is an electric motor of unknown type and power, which rotates the pulling or pushing propeller. A significant part of the fuselage should be given under the battery with the required parameters. In addition, when it comes to loitering ammunition, a warhead is needed.

The UAV must have an autopilot and/or a remote control system. The fuselage of the used "Geranium" was not preserved, and therefore it will not be possible to determine the principles of target search and guidance. At the same time, existing projects of loitering ammunition show that such a product can search for a target using optics or be guided along given coordinates.

Iranian loitering ammunition "Shahed-136" was developed at the end of the tenth years as a simple and long-range means to destroy various ground / surface targets. Already in 2019-20. similar products began to be used in Yemen. At the same time, the Shahed-136 complex was officially shown only last year.

Unknown structural element
UAV "Shahed-136" is a tailless with a rudimentary fuselage with an animated nose fairing. On the swept wing there are elevons and characteristic keel endings. The power plant includes a tail motor with a pusher propeller. Wingspan - about 2,5 m, length - about 2 m. Weight parameters are unknown.

For Shaheda-136, a flight range of at least 2 km is declared. The first modification of the device used coordinate guidance using satellite and inertial navigation. It was reported about the possibility of creating ammunition with optical search and guidance tools.

Loitering ammunition was demonstrated with the original self-propelled launcher, disguised as a truck. The installation is made in the form of a container with inclined rails for five UAVs. Before starting, the installation rises to a predetermined angle; drones fly out through the open roof.

The Russian UAV "Geran-2" and the Iranian Shahed-136 have a similar design and, probably, the same purpose. More daring versions are also offered, according to which this is actually the same product, but under different names. Which of the current versions is true is not yet clear. However, there are already grounds for some conclusions. 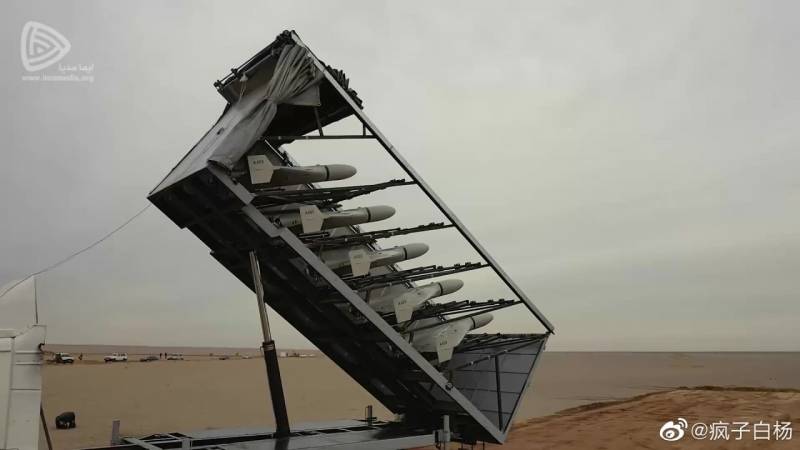 Launcher of the Shahed-136 complex
It is obvious that the Russian army has a new loitering ammunition, and this fact is already of some interest. Having entered service, the new "Geran-2" complements the existing products "Cube" and "Lancet" of the light class.

Apparently, "Geran-2" is larger and heavier than the "Cube" or "Lancet", and also carries a more powerful warhead and has an increased range. Accordingly, the army now has several loitering ammunition with different characteristics at its disposal. This makes it possible to increase the flexibility and efficiency of the application of such weapons, as well as optimize the use of other percussion means.

If the assumptions about the Iranian origin of "Geranium" are true, then the situation looks even more interesting. "Shahed-136" has high flight characteristics and is actually a medium-range missile. At the same time, depending on the configuration, it has the ability not only to hit the designated target, but also to observe and select an object for attack. 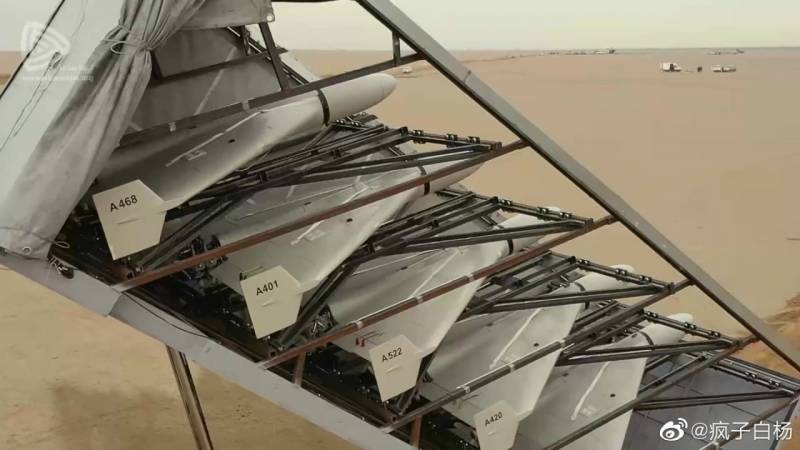 A complex of this kind formally belongs to the same class as "Lancet" or "Cube". However, in fact, he will be able to supplement full-fledged long-range missiles, such as the Caliber. The simplicity and cheapness of the design, as well as the presence of a land launcher, provide certain advantages.

However, the possibility of an Iranian UAV or its copy / analogue entering the arsenal of the Russian army is still in question. Deliveries of Shahed-136 or other equipment of this class are discussed only at the level of rumors, and they have not been officially reported. Perhaps this situation will be clarified in the future by confirming or refuting the circulating information.

Thus, a specific situation is still developing around the Geranium-2 product. It is authentically known about its existence and use in the Special Operation. In addition, one can make plausible estimates of its purpose. At the same time, there is a bold version about the origin of such a UAV, which does not have official confirmation, but is based on certain evidence.

Whether the Russian "Geran-2" is related to the Iranian "Shahed-136" is not yet clear. However, it is obvious that both unmanned systems are of interest to our army and can find a place in its arsenals. Moreover, loitering ammunition with a Russian name has already reached the troops and is being used against enemy targets. And the results of such strikes generally do not depend on its origin.