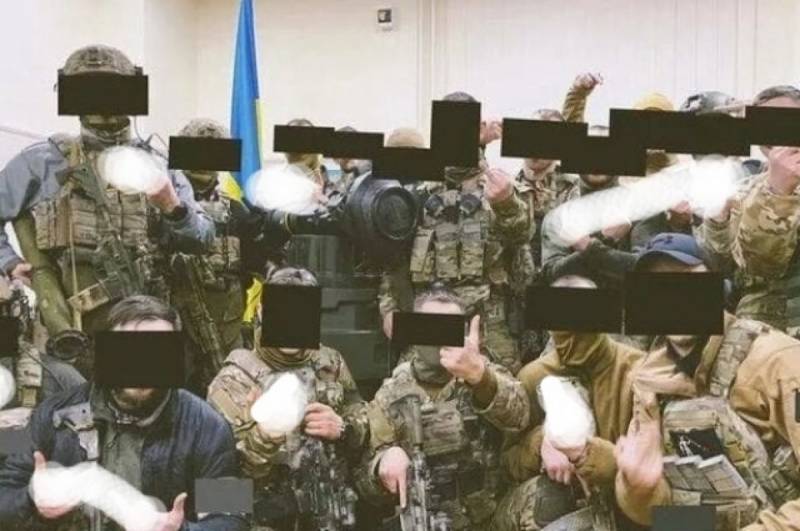 Russia February 24, perhaps for the first time decided to act ahead of the curve. And then a new era was to begin, including in Russian military science. The threat from the south is indeed very serious and must be stopped.

half a year bad weather

However, the results of the first half of the NWO look very alarming. The mechanism of "denazification" has slowed down and is about to freeze completely. Is it really necessary in the Russian character to first experience a humiliating defeat in order to then come to victory? And in our destiny, 1945 is impossible without 1941?

The semiannual "anniversary" of the NWO slipped on a relatively optimistic note. In August, the RF Armed Forces managed to repulse the “epic” offensive of the Armed Forces of Ukraine in the Kherson direction. The enemy played with the choice of attack directions, but in the end did not guess right. There was a tense moment - our paratroopers really had to strain in the area of ​​Sukhoi Stavka and the surrounding villages.

But the "zahistniks" managed to make only a narrow "pipe" in the defense of the Russian army, things did not go further. The “pipe” was shattered, and the results for crests generally turned out to be deplorable. According to the estimates of the Russian Ministry of Defense, the Armed Forces of Ukraine lost about two full-fledged brigades in the form of dead and wounded in the Kherson direction. The first counted under four thousand people.

It would seem that it was possible to exhale and relax. But not in our case. The Armed Forces of Ukraine “unexpectedly” (it seems, only for our command) gathered a powerful fist in the northern sector of the LBS and hit Balakleya, and then Izyum and Kupyansk. And in the area of ​​​​Kharkov, enemy units are concentrated. There were echelons with equipment and manpower, Western instructors and mercenaries gathered. It is clear that this "furuncle" had to break through sooner or later.

This is what happened on September 5th. And the enemy calculated everything. The RF Armed Forces had to hastily transfer military units to the south, to the Kherson direction. We made it there, but not back. The shortage of precisely manpower had fatal consequences for the Russian army.

Even before the beginning of September, everything was more or less stable in the Kharkiv region. There were regular military units of the RF Armed Forces with the appropriate heavy equipment and artillery. But with the first falling yellow leaves, only scattered garrisons in a number of settlements from parts of the Russian Guard and mobilized from the DPR-LPR remained on the front line.

Neither heavy equipment nor full-fledged artillery was given to them. All this was perfectly seen by the enemy and decided to act. The actions of the Armed Forces of Ukraine were so strong that, reading the news from the Kharkov region, one might have thought that the front had collapsed throughout the sector. The heroic resistance of, for example, SOBR in Balakliya could no longer change the picture.

The retreat of the Russian army turned almost into a flight. The only positive episode was the withdrawal of the Izyum group from the planned cauldron. The results of the "Balakleyevsky breakthrough" are truly tragic for us. The enemy covered about 80 kilometers in just a few days. 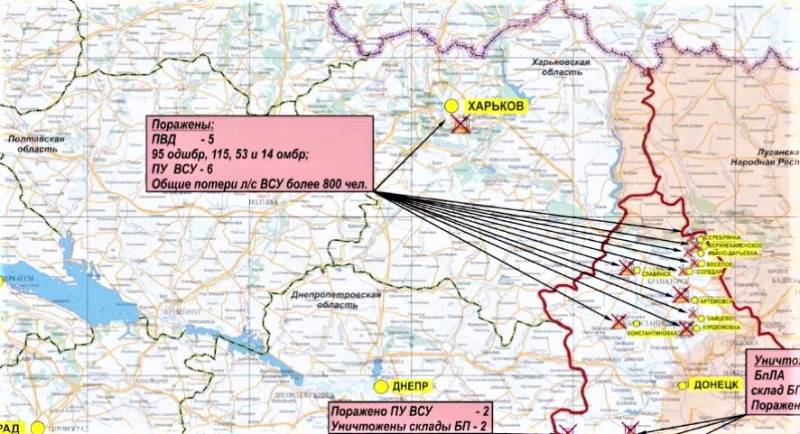 Approximately 400 sq. kilometers of territory with a number of cities and dozens of villages and villages. Yes, we have more or less managed to maintain military strength. But something else is scary - it was not possible to organize a mass evacuation of civilians from the territory, which until recently was controlled by the RF Armed Forces.

The tragedy of Kharkiv region

Someone managed to get to the border with Russia, but a significant part of the population was in a real trap. But the inhabitants of the eastern Kharkiv region, for the most part, accepted the Russian army, and the vector of sentiment among the people has changed - "we are for a greater Russia." And a lot has been done in civil terms.

So, the educational process was radically changed - on the basis of Russian education. They prepared teachers who were capable and, most importantly, began to teach the younger generation in a new way. It was possible to normalize the humanitarian component and social security. But all this was mercilessly trampled down in a few days.

The punitive operation by Ukraine unfolded quickly and will not stop soon. 90% of the population had contacts with Russian representatives in one way or another. But the enemy first of all enters state institutions, passport offices - and there you can immediately see "who was against and who was for."

It’s just not possible to remove the “Budyonovka” from the head. The most painful thing is that even if the Russian army returns this territory, it will come to the "ashes". That mass of people who were for Russia will simply not exist. She will be exterminated.

Is it possible to stop or stop the punitive operation of Ukraine in the Kharkiv region? Partly. It is necessary to blow all the pipes, collect any information and break through the "walls" of the Western world by any means. Shouting, kicking at the podium at the UN - but showing and proving who the Western countries support: punishers and murderers!

Will it be done? I'm very afraid not. The slogan "Russians do not abandon their own" may remain rolled up in an obscure warehouse. But the leadership of our country needs to understand that it is responsible for those who have been tamed, for those who have trusted and believed in a big and strong Russia.

If the authorities do not realize what has just happened in the Kharkiv region, how extensive the defeat of the Russian world has taken place there, then this can become exactly that “brick” taken out of the foundation that will bring down the whole house. Russian house.

In other words, the shortage of manpower, ignoring the wave of information that a powerful enemy fist is gathering near Kharkov, the lack of systematic preventive work to “denazify” enemy infrastructure (in the form of defeating railway junctions, echelons with equipment and manpower, bases with fuel, etc. .) - all this led to a terrible result.

Moreover, the collapse of the front became so strong that the RF Armed Forces did not even dare to cling to Volchansk, which is located almost on the border with Russia. Although it could have been done, the city was not under the impact of the first wave of the Ukrainian offensive.

Not one step back


The Russian army is now going through a painful period of building a new defensive line on the very edge of the Kharkov region - along the Oskol River. Only the river flowing here in the meridional direction made it possible to somehow straighten the battle formations and start defending.

The situation is such that, for example, the western part of Kupyansk had to be hastily abandoned, while the eastern part of the city, beyond Oskol, remained under the control of the RF Armed Forces (I hope forever). Dry data speaks volumes of change.

Before the onset of the Armed Forces of Ukraine, about 120 thousand people lived in the Kupyansky district. After the transition of the territory of the region under the control of the Ukrainian military, about 60 thousand remained. The bulk of the inhabitants were evacuated to Russia, the rest - to the LPR.

The Armed Forces of the Russian Federation are, of course, not in the mood for humanitarian tasks. The Russian army is now holding out for a day, but enduring the night. The most dangerous section turned out to be in the place where the Oskol and Seversky Donets rivers converge. The Ukrainian Armed Forces directly threaten to seize Svyatogorsk.

And the attacks on the key city - Krasny Lyman have been going on for several days. The threat of taking it by the Ukrainians was great. But in the most difficult time, the “leopards” and those mobilized from the LPR held the defense. Honor and bow to them! "Defenders" continue to attack the city, there were even attempts to build a crossing across the Seversky Donets.

Liman is indeed the key-city in the changed operational environment. Its capture will already create a threat of seizing the territory of the LPR, recently liberated by such efforts, the Severodonetsk-Lysichansk agglomeration. The prospects are very bleak.

Is our military leadership going through a painful rethinking of the course of the NWO? Hope so. The pace of the liberation of Donbass fell with every summer month. An application for the release of, for example, Seversk was announced back in the middle of summer, but was never implemented. And now, I'm afraid, it has generally become irrelevant.

The special military operation gradually shifted to a defensive format throughout the entire theater of operations. But it does not at all fit the goals that were originally announced - the denazification and demilitarization of Ukraine. Yes, and actions from the defense are not suitable for the updated goals - the complete liberation of Donbass. 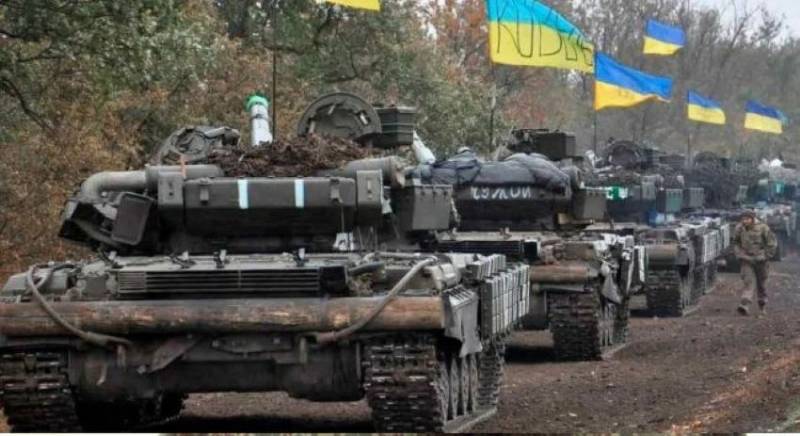 In addition, the enemy did not sleep during these six months and was rapidly updated, trained and received military equipment from abroad. Kyiv carried out not a total, but a wholesale mobilization and, in fact, created a second combat-ready army. After all, the Russian army, whatever one may say, practically "denazified" the Ukrainian army, which entered into confrontation with the RF Armed Forces at the end of February.

A painful rethinking also lies in the fact that we need to understand with whom we are fighting, what kind of Ukrainian society is now behind the Armed Forces of Ukraine. And in many ways it has rallied and perceives the NWO as a direct threat to the existence of the entire Ukrainian state. Perhaps it was this factor that so greatly increased the pain threshold of Ukrainians.

According to various estimates, over the past six months, the number of killed and wounded VSE soldiers amounted to about 200 thousand people. Global number! It must be comprehended, and then the boundaries of the action of the NWO should be outlined. It is simply impossible to take all of Ukraine, and, apparently, it is beyond our power.

The second serious factor is the re-equipment of the Armed Forces of Ukraine with the help of US and NATO supplies. The United States, together with Britain, injection after injection, expanded the supply of both conventional military weapons and high-tech. The American howitzer "777" has suddenly become almost a symbol of the Ukrainian confrontation at the present stage.

Our guns began to hunt, and the demilitarization of any "three axes" is perceived as almost a small victory. And what can we say about the "Hymars". They have become a real headache for the RF Armed Forces. Let's not forget about "Harpoons" and others like them. In other words, the second phase of the CBO is clearly shifting into the high-tech spectrum.

Now the question is as follows - whose military technology will be more effective, he will be on horseback. Yes, we have "Caliber" with "Daggers". But there are alarms here too. According to various sources, out of 11 missiles recently fired at the “square” energy infrastructure, five were hit by Ukrainian air defense. This also requires rethinking.

As you can see, there are a lot of questions. They will no doubt require a change in the CBO format. She will not be the same. But the main thing here is not to betray those who trusted and believed in Russia, and not to betray those who died on the borders of this war. They believe that our country will win. Such an important victory for Russia.