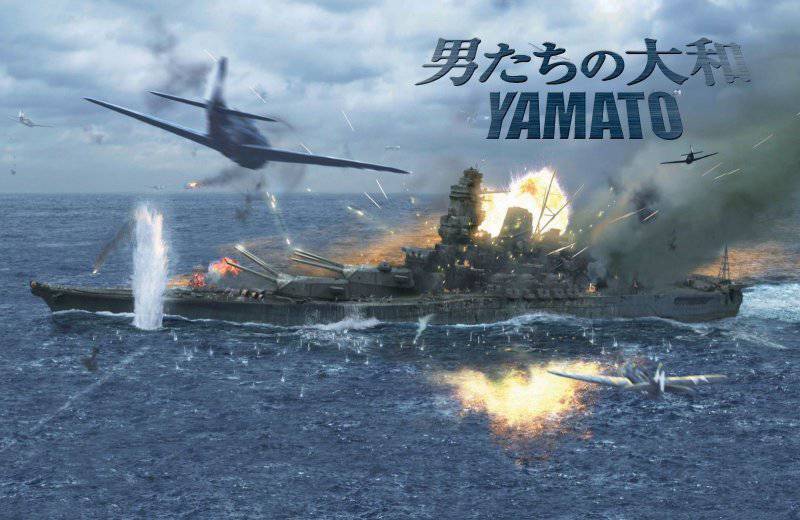 Our proud Variag does not surrender to the enemy,
No one wants mercy.

East China Sea, 100 miles southwest of the Japanese island of Kyushu. Here, on April 7, 1945, a real sea tragedy erupted: under the blows of the deck aviation The US Navy killed a Japanese squadron led by the battleship Yamato. Superlinkor with a total displacement of 70 thousand tons was ingloriously drowned two hours after the start of the air attack.

That day the Japanese lost 3665 sailors. The American casualties were 10 airplanes (four torpedo bombs, three bomber, three fighters) and 12 pilots - the microscopic price for the destruction of the largest warship in stories Humanity. In principle, in the annals of maritime history, more paradoxical situations are known, for example, the incredible return of “Seidlitz” or the miraculous salvation of the brig “Mercury”. But the sea battle of 7 on April 1945 of the year was a truly momentous event - a fat point was put in the long dispute between an artillery ship and an aircraft carrier. From now on, the most obstinate skeptics became aware of who is the lord of the seas. The war in the Pacific, starting with the battleship pogrom at Pearl Harbor, ended with the triumphal sinking of the most powerful battleship on the planet. Deck aviation stunningly dealt with any enemy on the coast and in the open ocean.

But back to that legendary sea battle, for the past 70 for years, an all-time lover of maritime stories. According to the plan of suicide operations of Ten-Go, "Yamato", despite the many times superior enemy forces, had to break through to the island of Okinawa, where it ran aground and turn into an impregnable fortress. To maximize this Odyssey, the battleship was given an escort from the cruiser and 8 destroyers: 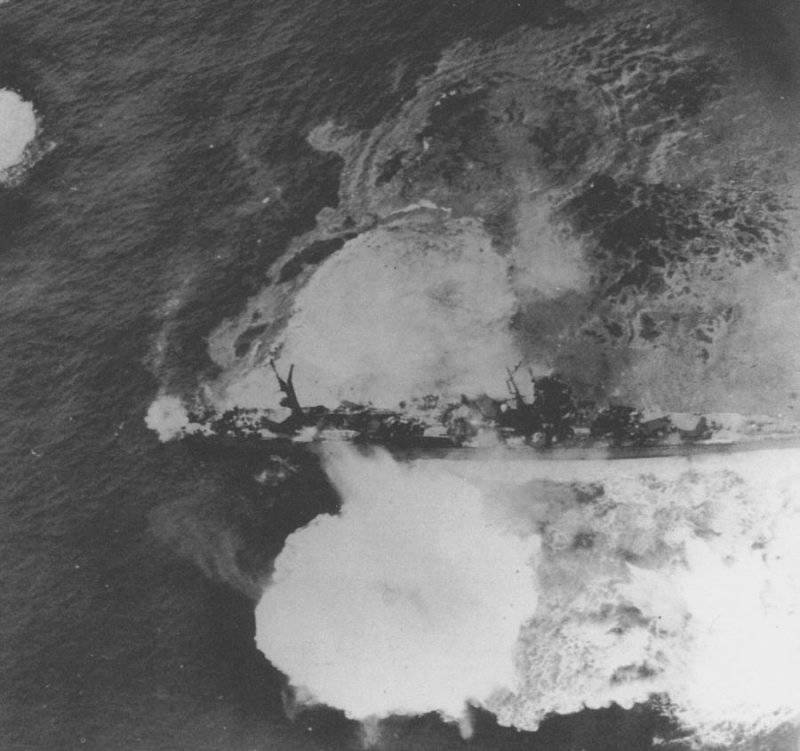 Two specialized destroyers of air defense "Suzutzuki" and "Fyutzuki". Both ships were much larger than the usual destroyers, their size corresponded to the legendary Soviet leader "Tashkent". The cruising range reached 8000 miles (at 18 knots), which in theory allowed them to cross the Pacific Ocean and go back to Japan without replenishing fuel supplies. The main armament of destroyers: 8 x 100 mm highly automated anti-aircraft guns, 48 anti-aircraft guns caliber 25 mm. Guided by a radar, the Suzutsuki and Fyutzuki guns were supposed to create an irresistible wall of anti-aircraft fire.

And, in fact, the battleship Yamato itself (the ancient name of Japan). 70 thousand tons full displacement. Speed ​​27 knots (50 km / h). Crew 2500 man. Armor belt - half a meter of solid armor. Impenetrable and unsinkable. The main caliber is 460 mm (nine guns in three towers).
The 24 mm 127 universal naval guns and one hundred sixty-two! 162 mm automatic anti-aircraft guns covered the battleship attacks from the battleship from the air. The fire control systems included 25 radars of various ranges.

All pennants hover and chains rattle,
To the top of the anchor lift,
Prepare to fight the guns in a row,
The sun sparkles ominously

In total, American aviation opposed up to 100 medium-caliber artillery barrels and over 500 automatic anti-aircraft guns, not counting the heavy machine guns and the monstrous “Sansiki-type 3”? created by Japanese engineers anti-aircraft ammunition caliber 460 mm. At a given height of the projectile struck multimeter flames, and it turned into a ball of thousands of striking elements. Awesome fireworks turned out to be ineffective in practice. weapons, and terrible shots of the main caliber prevented shoot calculations of anti-aircraft installations.

Whistles and rattles and rumbles around
Thunder cannons, hiss projectiles.
And our fearless and proud Varyag became
Like hell pitch.

As expected, the sea pilots did not pay any attention to the deadly anti-aircraft fire and bravely attacked the squadron from all points. Pilots of torpedo bombers sought to get into the starboard side of the Yamato - they wanted to quickly return to their native aircraft carrier and get a portion of ice cream, so it was decided to hit only one side with torpedoes - so the battleship would quickly turn over. Indeed, in less than two hours, Yamato lay on its side and suddenly turned into a bright flash of light. The multi-kilometer “mushroom” of the explosion was visible for tens of miles.

In death agony tremble body,
The thunder of guns, and smoke, and the walls.
And the ship is swept by the sea of ​​fire
Has a goodbye minute.

By the way, such a strange victory did not impress the American sailors, and the drowning of the Yamato never attached much importance. There was a battleship, then drowned.

Yamato sank the 58-e operational connection of the US Navy. Behind this quite everyday name is the most powerful squadron of warships that ever traveled the oceans. Two dozen strike aircraft carriers under the cover of high-speed battleships, heavy cruisers and hundreds of destroyers. The air group of each aircraft carrier was equal in size to two Soviet aviation regiments of the 1945 model. 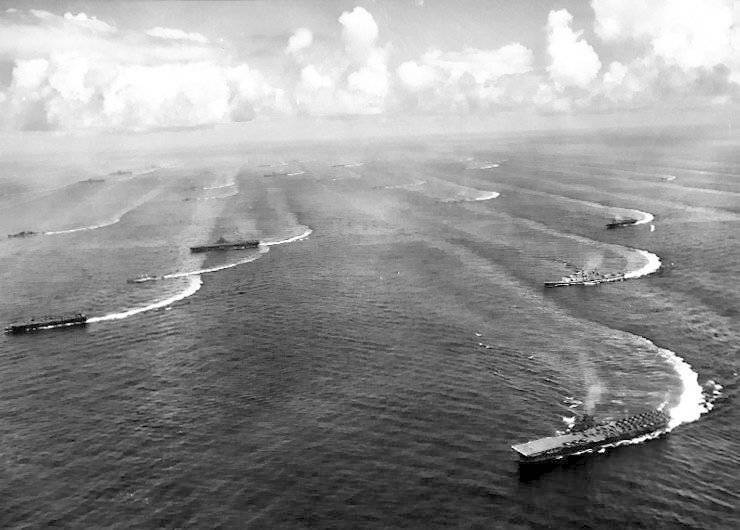 TF58 turns to meet the enemy

Task Force 58 was the favorite means of the American command - this “club” beat anyone who dared to offer at least some resistance. During the landing on the atoll of Kwajalein, aircraft carriers and battleships dug week this piece of land until there was not a single tree left on it, and the soldiers of the Japanese garrison who had accidentally survived were deaf and in shock. Yes, the Americans preferred to throw heavy bombs and 406 mm shells at the enemy, rather than the corpses of their draftees (it is fair to say that this is a very correct approach to the conduct of hostilities). But, as one of the visitors to the Military Review Forum correctly noted, the American armed forces were the only ones who could afford it. The armies of the other countries had to win victories in bloody fights for life and death.

The deck of the aircraft carrier "Hornet". During the war years, the United States built a series of similar ships 24.

In early April 1945, the incredible Task Force 58, consisting of five strike carriers Essex, Hancock, Bennington, Hornet, Bunker Hill, as well as light aircraft carriers Bello Wood, San Jacinto Cabot and Bataan, under cover of an escort of six battleships such as Iowa and South Dakota, as well as countless submarines, cruisers and destroyers, patrolled 70 miles from Okinawa, waiting for the last remnants of the Imperial fleet will venture out into the open sea. The Yamato turned out to be such a desperate ship ...

In view of the foregoing, the sinking of the Yamato squadron looks like “beating up babies”. Against a single battleship, the Americans put out a dozen aircraft carriers. Shame US Navy!

Despite the impressive number of Task Force 58 ships, only deck-based aircraft operated against the Yamato. American battleships and cruisers did not take part - the battle took place in 300 miles to the west of the location of the main task force 58.
Further, all 280 deck planes from 400 that were available, i.e., participated in the attack. it is reasonable to assume that not even all aircraft carriers were involved. The 280 aircraft of the Yamato squadron attacked virtually 227 machines - the rest of the 53 were lost on the way and did not hit the target (admittedly, the raid occurred during bad weather, and there were no GPS systems at that time). But even this amount was enough in abundance.

Aircraft attacked not all at once, but in several waves. The first, the largest, consisted of 150 machines. After 20 minutes over the Japanese squadron, a second group appeared - 50 aircraft. Bombers came strictly from the nose of the battleship and went into a gentle dive, in this case their angular speed was so high that the Japanese anti-aircraft gunners did not have time to deploy the barrels of their guns. Fighters swarmed over the squadron, pouring decks of lead from .50 Browns over the decks. The torpedo bombers continued methodically smashing the starboard side of the Yamato. The battleship hit at least 15 bombs and 13 torpedoes. 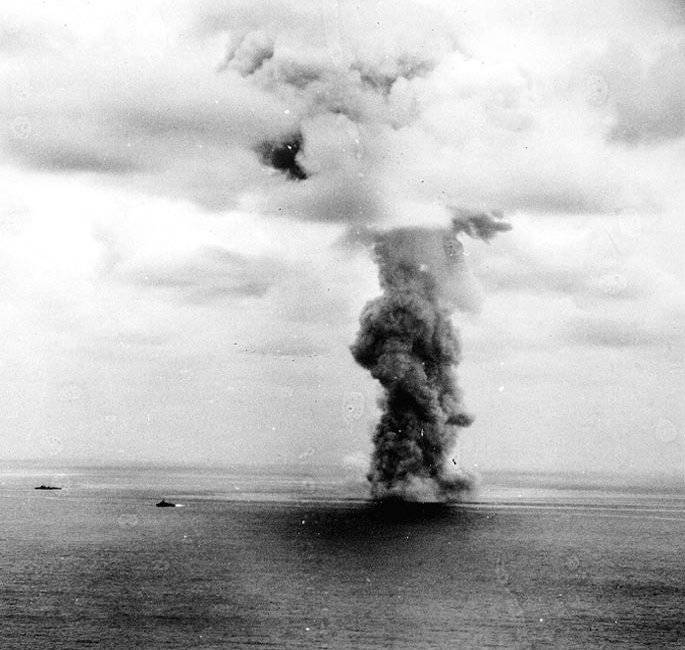 Together with the battleship, the cruiser “Yahagi” died - a modest ship received six torpedoes one after the other. 8 escaped 4 escort destroyers. All of them received injuries of varying degrees of severity, and the destroyer “Suzutzuki” managed to escape from the severed nose part.

As a result of the battle, it is clearly noticeable that the Americans clearly overdid it and sent an excess amount of deck-based aircraft. For example, from more than two hundred machines of the shock group only 97 were torpedo bombs, and about a hundred other aircraft were F4 Corsair and F6F Hellcat fighters, whose presence was limited only by moral influence on the enemy. Initially, the declared number of aircraft - 280 units - could be easily provided by air groups of three aircraft carriers of the Essex type.

Do not forget that in the first (most numerous) wave, the Japanese squadron attacked the entire 150 deck aircraft. Therefore, theoretically, it can be assumed that the destruction of the Yamato and its squadron could provide two heavy aircraft carriers, subject to the refueling of the returned aircraft and the repetition of sorties - they had enough aircraft, fuel and ammunition. In 1945, the 100 aircraft were deployed on the Essex decks on average, deployed in two large (36-37 aircraft) squadrons of fighter-bombers and two smaller squadrons of dive-bombers and torpedo bombers (15 aircraft). 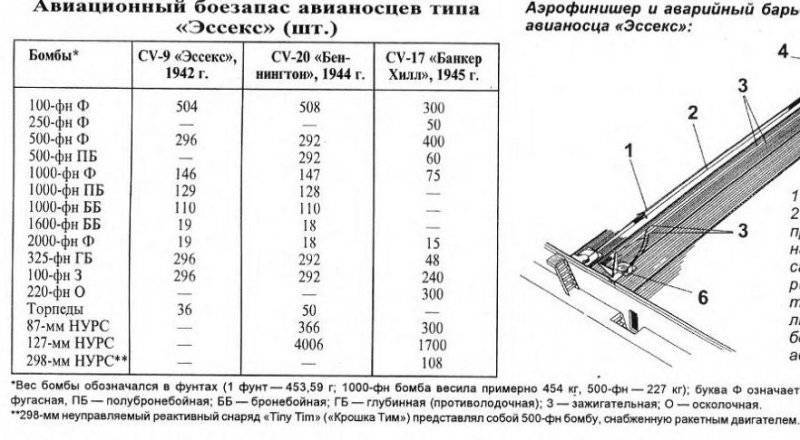 The number and type of ammunition on board aircraft carriers (from the monograph by A. Balakin "Aircraft carriers of the Essex type"
If two aircraft carriers were used, the result would have been the same, but, of course, such a course of events would take much longer - Yamato would be heated until the evening. In any case, a quite obvious conclusion follows from this story - aviation plays a decisive role in modern naval combat.

As for the superlinkor itself, the Japanese still respect the death of Yamato. 2500 man of the Yamato crew knew they were going to die. Bravely going out into the sea and dying in an unequal battle, he repeated the feat of the cruiser Varyag. And such an act is highly valued at all times.