October 20 2012
355
"Here are some parts you drag from the factory -
how do you start at home to collect
the Kalashnikov assault rifle goes anyway. ”
Bearded Soviet anecdote. 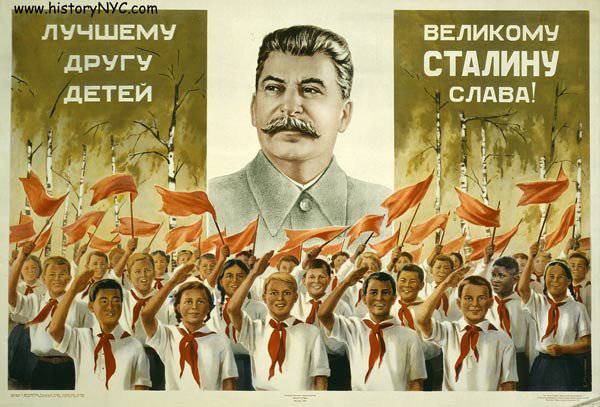 Before starting a patriot-hysterical grumbling about the fallen mores of modern youth, I want to draw your attention to one and a half years ago the plot of NTV.

Then, at the dawn of an absurd "de-Stalinization", high school students in a Moscow school were offered to write an essay about Stalin. The results turned out to be shocking for reporters and aunt-teachers — for everything, a veteran of perestroika. The younger generation turned out to be completely “not in the line” - and stated its opinion on Comrade. Stalin and his era in more than a positive way. In general, the confused intelligentsia was left to rattle something helpless about gadgets and holidays in Turkey.

And now important. Listen carefully to the arguments of the debating parties, so to speak - and you will see that they speak fundamentally different languages. Well, that is, in general, "your mine do not understand." And even more important: on human language they say the schoolchildren. Those who have already been deliberately rushed to write off in the “lost generation” - on the grounds that they are “not wearing the right dress”, “are not listening to the right thing”, are packed with mobile phones and tusk “VKontakte”.

So here. It is these “spiritless” who formulate their opinions on a given topic. essentially. They very sparingly mention personally c. Dzhugashvili I.S. and his craving for devouring babies or brilliant creation of miracles. But in support of his positive assessment of his activities lead accomplishments countries - construction and discoveries, Victory and space (you will be surprised - these guys may be confused in dates, but Gagarin is intuitively and accurately attributed to that era).

A voice-over in response is trying to say something about “democracy” and “standard of living” (hopelessly rolling down to iPhones and iPads). The teacher also leads a killer, in her opinion, counter-argument: in those days you could not go on vacation to Turkey for the holidays. And complains to the camera that, they say, it’s not enough that we still have the truth about the horrors of the bloody way ... that is, the Stalinist regime.

The kids all this crap politely listen, do not understand a damn - and again for their own: factories, battles, dreams ...

Fathers and children dispersed. Each in his own way: some with “freedoms” and “Turkey”, others with admiration for the accomplishments of their ancestors and their dream to outdo them.

Where does that come from?

It would be extremely irresponsible to unfold any meaningful generalizations from one plot. After all, for each randomly peeped example you can find another - no less randomly peeped, but opposite in content. But it is possible to put forward some assumptions. Moreover, the observations - even though I repeat, are not systematized, but they are not isolated.

First of all, I propose to draw attention to the obvious fact - so obvious that, as usual, "deeply hidden" in the most prominent place. We have somehow suddenly grown up a whole generation of people who did not find not only the Soviet era, but also the first post-Soviet. They were born after the disaster, and on 90 they had their happy childhood - which, by definition, is happy because it is childhood. Now this youth is just “senior school” or “early wrestling”.

It is completely natural to notice that this youth grew just in the years of the notorious “Putin's stabilization”. This implies the assumption (again - without claiming to generalize) about a somewhat different attitude to the “freedoms” and attributes of “welfare” than the older ones.

For seniors, these are achievements, the conquest of democracy and the gifts of the invisible hand of the market. Older to their wheelbarrows, Internet, Turkey, etc. - as they say, Dorval after the Soviet deficits and poverty 90's.

For the young, all this is the natural and inconspicuous details of the surrounding everyday landscape. IPhone is a convenient (and yes yes - prestigious) means of communication, not a value. A car is a vehicle, not a value. Turkey and even Paris itself is a line in the flight schedule, not a value. Hundreds of TV channels and millions of sites - the flow of information and entertainment, not value.

And that which is not valuable is not a pity to exchange for something more valuable.

The trick is that specially trained adults in this youth did not bring up any other values ​​besides the above mentioned ones. And in order to have all these values, a standard set of primitive imperatives is prescribed: strive for personal success and well-being, nasri on your neighbor, do not be cattle and do not let yourself dry out.

Why? Yes, at least, for example, because of the rationality to which the children were diligently taught. Well, they taught: to strain on a fig for the sake of what is already there? Irrational.

Let's return to the composition. Where from before the great generation of winners, where do dreams come from? From where St. George ribbons и military songs on Victory Day? Why is it not corroded by “Bastards”? Why did the single “We are from the future”, “Brest Fortress” and “Match” trample down numerous “Burnt by the Sun”?

But let's assume that children are also brought up in the family - in the primary, so to speak, cell of society. And here we will be buried no longer in assumptions, but in the stubborn statistics that minorities are persistently trying to replace a lie from the "Archipelago": In each the family has great-grandfathers and great-grandmothers who took Berlin, built the Dnieper hydroelectric power station, built cities, stormed the cosmos, raised bread; and historically "offended" - on the strength of one and a half percent; those who did not forgive their country of offense are altogether negligible.

Well, where from with such statistics and other objective introductory information come from the “generation of victims”?

Youth is prone to dreams - this is normal.

The youth dreams about what he does not have - this is also normal.

Our youth naturally yearns for great accomplishments - worthy of the country in which it grew up.

And this is normal - because these are children of a terminally great country. With such historical consciousness, with such a gene code in which you grind anything - anyway, for a thousand years now, you’ve been getting a Kalashnikov assault rifle.

These are our children. The best in the world, of course.