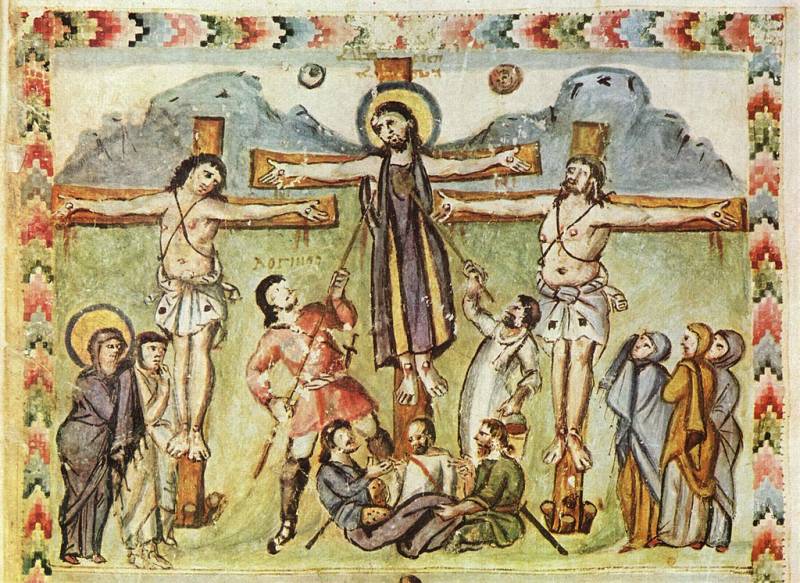 Crucifixion of Christ. Above the soldier's head is written his name ΛΟΓΙΝΟΣ. Gospel of Rabula, 586. Medici Laurenziana Library, Florence

"... but one of the soldiers pierced his side with a spear, and immediately blood and water came out."
John 19: 34
History and culture. There are artifacts of a unique fate in history. Their story is often like a detective story. And how many legends they gave rise to, and do not count. And one of these artifacts is the so-called Vienna spear, the Hofburg spear, or the Spear of St. Mauritius, although it is more correct to speak of the spearhead, since its shaft itself has not been preserved. It is believed that this tip is also one of the Instruments of the Passion of Christ, miraculously preserved to this day and, moreover, possessing great magical power. This is one of the greatest relics of the Christian faith, because it touched the flesh of Jesus Christ himself. True, confirmation that some kind of spear pierced his body is only in the Gospel of John. Three others - from Luke, Mark and Matthew, nothing is reported about this event. However, it is already a miracle that this tip, to which so many things are attributed, has survived to this day and is today stored in the imperial treasury of the Hofburg castle in Vienna. They also call it the "Spear of Fate", and that's what we'll tell you about today ... 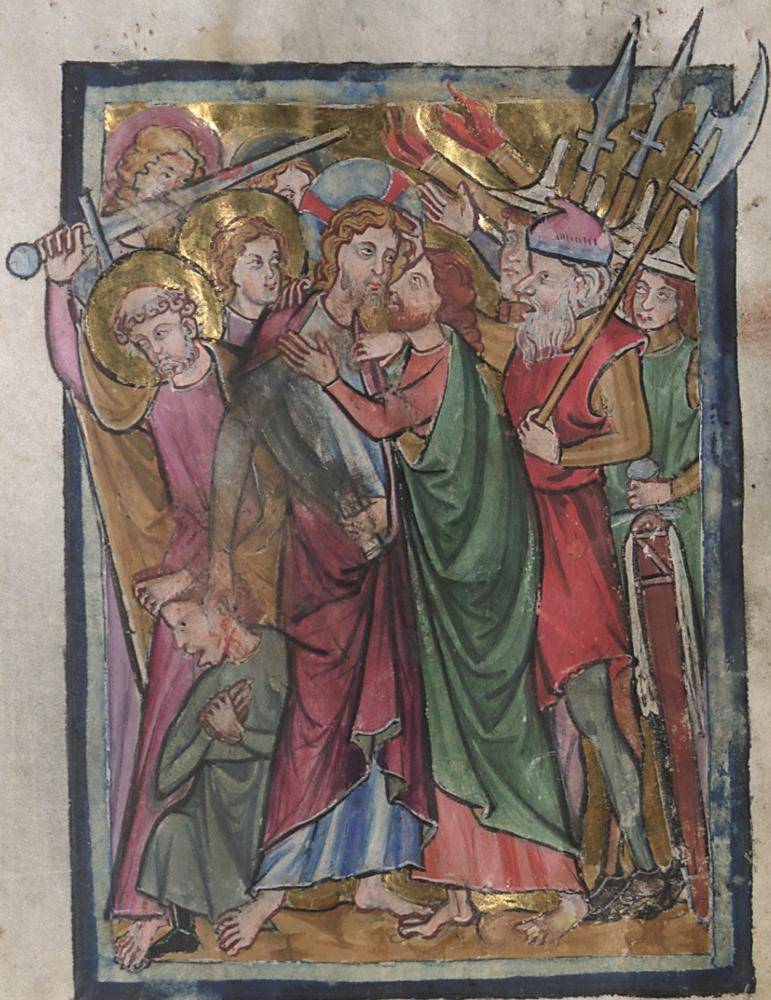 "Kiss of Judas". Psalter, ca. 1260-1270 Attention is drawn to the spearheads shown in the miniature. State Library of Württemberg

Spear of Constantine, Longinus or Mauritius?

Let's start with the fact that this spear has undergone many interpretations and was considered at the same time the spear of the emperor Constantine, and the spear of St. Mauritius, and the spear of the centurion Longinus. Moreover, it became the “spear of Longinus” during the 4th century. So, one of the widespread legends said that the centurion Gaius Cassius Longinus struck Jesus Christ between the 5th and XNUMXth ribs with this spear, and it passed through the pleura, lung and heart, but did not damage the bones. Guy himself at the place of execution commanded the Roman soldiers who guarded Golgotha, and with a spear hit Jesus out of mercy so that he would not suffer for a long time on the cross. 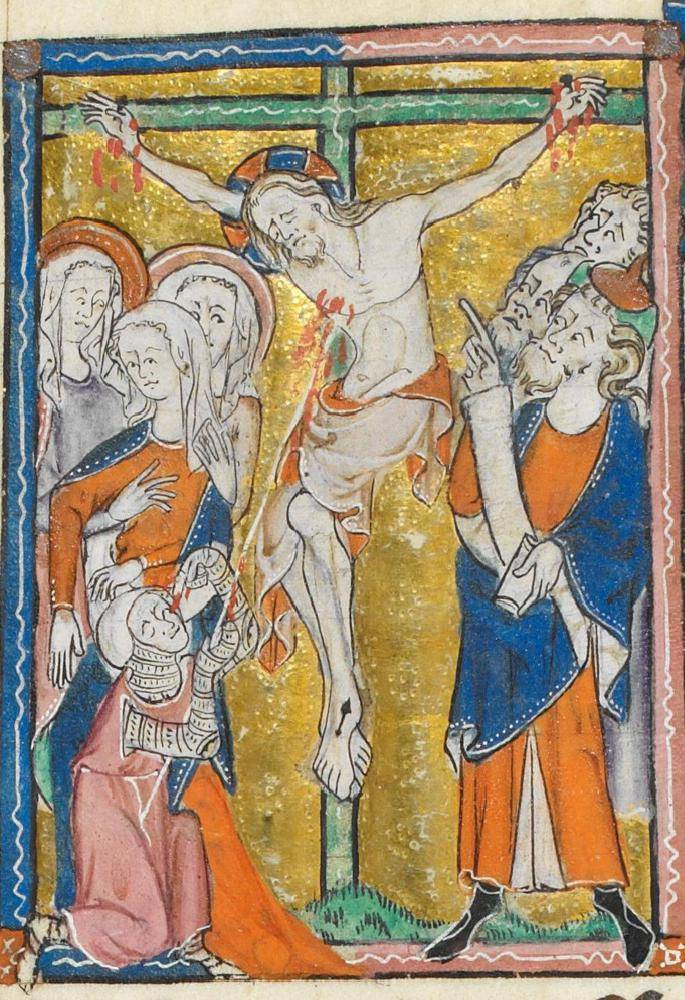 "The Mercy Strike of Longinus". Psalter and Book of Hours, ca. 1310-1320 british library
The spilled blood of Joseph of Arimathea was collected in the Grail, and the body of the Savior was removed from the cross, covered with a shroud and laid in a coffin. At the same time, Gaius Cassius himself believed, became a Christian, and was later even canonized under the name of St. Longina. And it is clear that this spear, whoever it belongs to, has become a shrine, as well as a crown of thorns, a cross, nails, a shroud and a coffin. 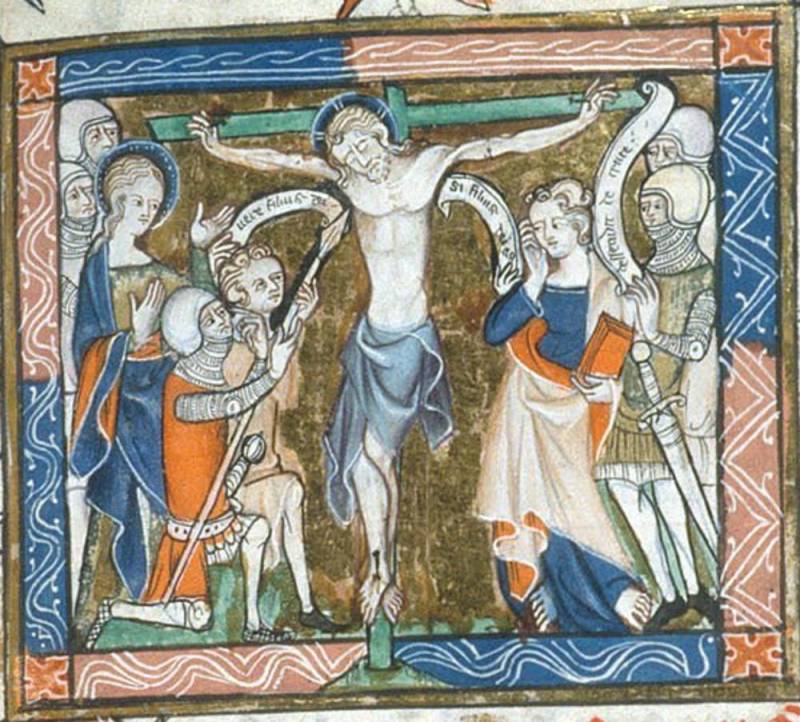 Another blow of mercy. Neville's Book of Hours, c. 1325-1350 british library
The Gospel of John describes it this way:

“But since [then] it was Friday, the Jews, in order not to leave the bodies on the cross on Saturday, for that Saturday was a great day, they asked Pilate to break their legs and take them off. So the soldiers came, and they broke the legs of the first, and of the other who was crucified with Him. But, having come to Jesus, as they saw Him already dead, they did not break His legs, but one of the soldiers pierced His side with a spear, and immediately blood and water came out. And he who saw testified, and his testimony is true; he knows that he speaks the truth so that you may believe. For this has come to pass, that the Scripture may be fulfilled: let not his bone be broken. Also in another [place] Scripture says: They will look at the one who was pierced. ” (19:31-37) 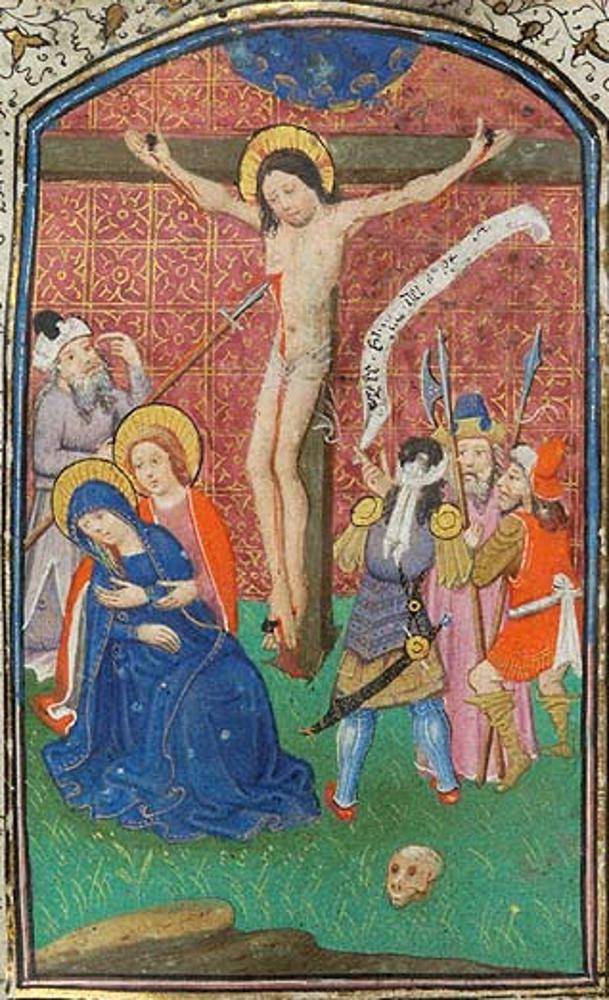 Judging by the number of images in the manuscripts, the theme of "strike" was very popular in the Middle Ages. Hours, ca. 1400-1440 Morgan Library and Museum, New York
According to another legend, it originally belonged to St. Mauritius, attributed the possession of this spear and Emperor Constantine. Then the future emperor Otto the Great somehow got it, and with his help he defeated the Hungarians at Lech in 955. So it ended up on the territory of the future Austria, and eventually came to the Habsburgs and turned into a state relic.

The fact that it belonged to Otto is reported by Liutprand of Cremona in his “History”, completed in 961. In it, he gives a description of the “Holy Spear” of Otto the Great, and it completely coincides with the description of the spear from the Hofburg. Moreover, the spear, according to Liutprand, originally belonged to Charlemagne, who in 774 received from the Pope as a sacred relic the spear of Emperor Constantine.

From all of the above, one thing is clear - the spear is quite ancient. Moreover, referring to the miniatures of medieval manuscripts and the samples of iron spearheads of that time that have come down to us, it is easy to see that we have a typical tip of the Carolingian winged spear! Its length is 50,8 cm, width - 7,9 cm, and weight is 968 g. 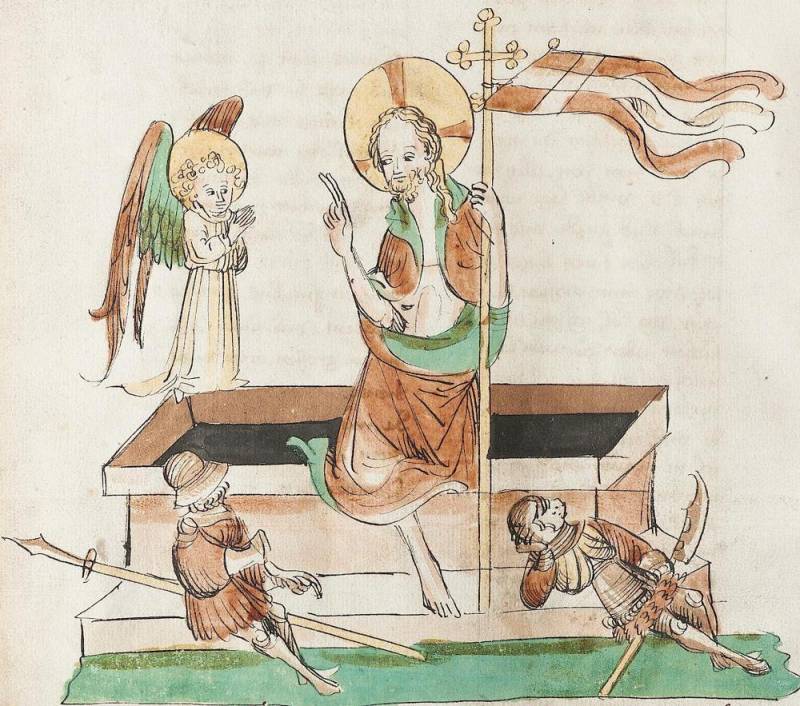 The guard sleeps, and Jesus rises from the tomb. Moreover, one of the warriors still has a “winged spear” in his hands. History of the Bible, 1430 Darmstadt University and State Library, Germany
The steel tip is actually not a whole one, which, by the way, is why it looks so strange, but consists of two parts, fastened together with silver wire and additionally wrapped with a gold slip sleeve. The middle part of the tip is hollow. It contains a hammered nail, inlaid with tiny copper crosses, matching in length and shape to those nails used by the Romans in the XNUMXst century. It is also believed to be one of the Instruments of the Passion. The nail was screwed to the tip with silver wire. On the gold plate there is an inscription: "Spear and Nail of the Lord"(lat. LANCEA ET CLAVUS DOMINI). On the inner silver hoop is a more detailed text: "By the grace of God, Henry IV, the great Roman emperor, the most august, ordered to make this silver hoop in order to fasten the Nail of the Lord and the Spear of St. Mauritius"(lat. CLAVVS DOMINICVS + HEINRICVS D(EI) GR(ATI)A TERCIVS ROMANO(RUM) IMPERATOR AVG(USTUS) HOC ARGENTUM IVSSIT FABRICARI AD CONFIRMATIONE(M) CLAVI LANCEE SANCTI MAVRICII + SANCTVS MAVRICIVS).

There he is - a tip from the Imperial Treasury of the Hofburg Palace in Vienna. Length 50,7 cm, weight 968 g. Photograph of the Kunsthistorisches Museum Vienna
Since the tip is broken, there were attempts to fasten it with overlays: iron during the time of Emperor Otto III (X-XI centuries), silver under the Holy Roman Emperor Henry IV (XI-XII centuries) and gold in the XIV century under the Holy Roman Emperor Charles IV of Luxembourg (1346-1378), on whom this spear made such a strong impression that he attached a golden cuff to it with the inscription: “Spear and Nail of the Lord”, and then even got the pope to establish a holiday in honor of the spear and nail. 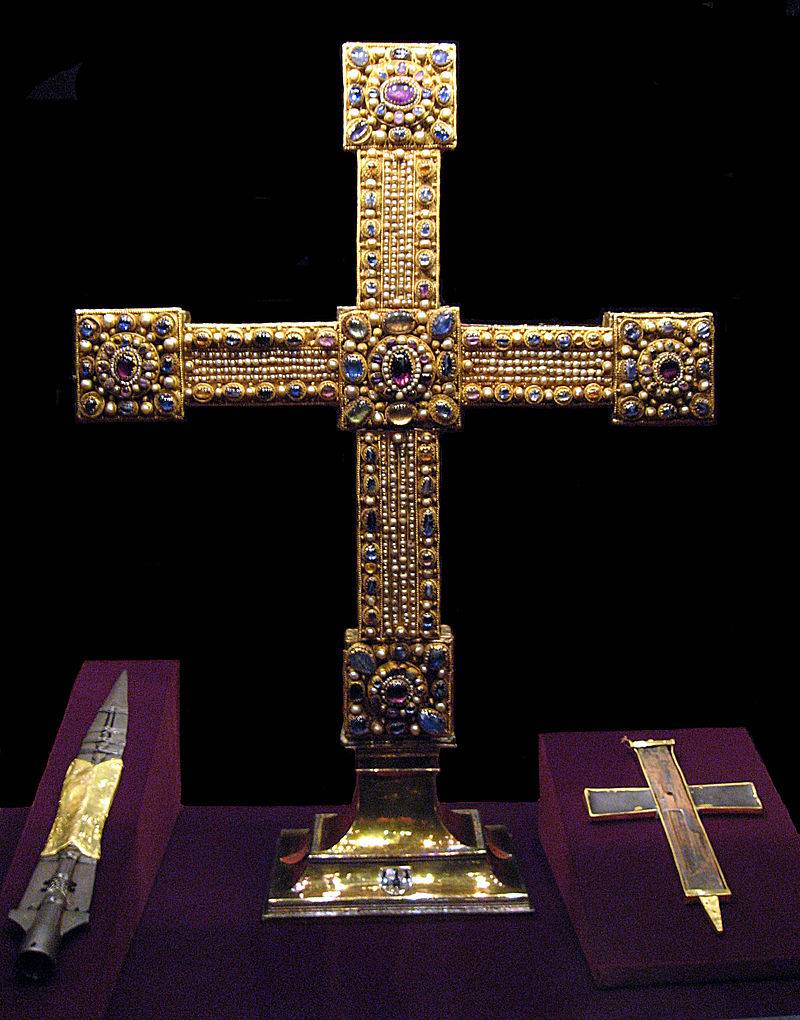 The Holy Spear, Imperial Cross, and Life-Giving Cross are holy relics of the imperial crown. Photograph of the Kunsthistorisches Museum Vienna
At one time, Vendalen Behveim was a well-known Austrian historian and weapons expert, author of the book “Encyclopedia weapons”, published in Russia in 1995, tried to dispel the myths of the spear. He argued that this is a typical early medieval spear, since it has two crossbars ("porches") at the base. But numerous additions, such as slots and gold overlays, were made later. Behaim dated the spear to around the XNUMXth century CE. e. That is, it is still a sample of a very ancient European pole weapon.

"Winged Spear" 1400-1450 (shaft made of ash, modern work). Overall length 2121 mm, tip length 372 mm Weight (including shaft) 2,38 kg. Royal Arsenal, Leeds
Of course, such arguments were and are purely speculative. Therefore, already in our time, with the involvement of the most modern technology, the British expert Robert Feather in January 2003 carried out a thorough examination of the tip, including both X-ray spectral and fluorescent analysis, and they showed that they made it in the 600th century. So this tip has nothing to do with the story of Jesus Christ. The silver wire holding the tip together was made before XNUMX AD. It was also confirmed that the silver lining was made in the XNUMXth century, and the gold one in the XNUMXth century.

Tip without lining
Actually, this was clear before, because its shape does not at all resemble the tips of Roman spears. As you know, in the first centuries of our era, the Romans no longer used their famous pilum throwing dart. In the course was a universal hasta spear with a bay leaf-shaped tip. While the "winged spears" in Europe were in use until the XNUMXth century. 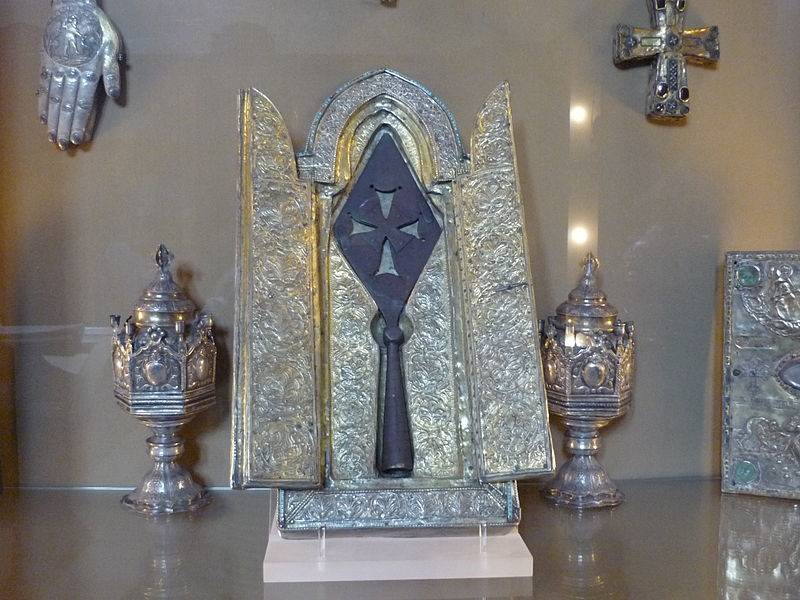 Holy spear from the Etchmiadzin Monastery
It is interesting, however, that not only this spear is considered sacred. Actually there are three! In addition to the Hofburg, the tip with a broken point is kept in the Vatican, there is a copy of this tip kept in the Krakow Cathedral, and, finally, the so-called "Armenian spear", which is also a shrine, but which certainly could not be worn by any Roman of the era of Jesus Christ . It is also very ancient and has been located in the city of Vagharshapat in the treasury of the Echmiadzin monastery since the XNUMXth century, but the Catholicos of all Armenians does not allow it to be explored. But human imagination is limitless. There would be an artifact, and she would attribute so many legends to him that she could not count. However, they will be discussed in our next article.