Does Russia need a new constitution? 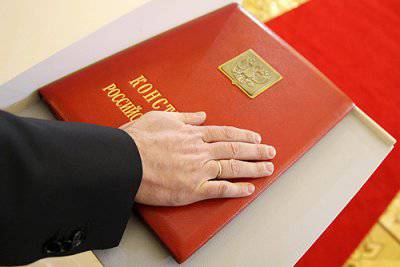 With all the doubts of skeptics, the political life of the country is surprisingly surprising for its diversity. The Udaltsov calls to go outside and stand until the time when the power in the Kremlin passes into the hands of the “right” political forces had barely subsided as soon as Ksenia Sobchak managed to return her honestly earned 1,5 million euros, and the barely scandalous punk band managed for everything Of the “progressive” West to appear as “prisoners of conscience,” as a surprising political activity has suddenly manifested itself on a completely different flank.

We are talking about a round table held not so long ago within the walls of the State Duma, which bore the rather intriguing title “The Constitution as the basis of sovereignty”. The main actor who opened the round table was the Russian legislator, a member of the Duma faction of United Russia, the state adviser of the Russian Federation, Yevgeny Fedorov. He invited all those present to express their views on the modern Russian Constitution, which is the main Russian law since 1993.

It would seem that if the meeting itself is opened by a deputy from the United Russia party, and also by a member of its Central Political Council, then in the statements of those gathered about the current Constitution one can hardly expect critical notes. However, during the speeches of the audience, it was heard not that critical notes, but a whole alarm, the sound of which boiled down to the fact that the current version of the basic Russian law is simply unacceptable for Russian citizens, that is, for each of the participants, and, accordingly, for each of us. At the same time, it seemed that after a speech criticizing the Constitution, the next speaker would have a different point of view. But the speakers replaced each other, and the more time passed since the discussion began, the more it became clear that the so-called round table turned out to be a very filtered audience, which was completely inclined to believe that the Constitution should certainly be changed.

Surprisingly at the table turned out to be the person who brought with him, as much as possible, the draft of the new Russian Constitution, printed in a printed version. This man appeared Stepan Sulakshin, who is the Director General of the organization called "Center for Problem Analysis and State-Management Design." By the way, on the website of the organization headed by S.Sulakshin, there is a description of such work as the “Scientific model of the new Constitution of Russia”.

Mr. Sulakshin in a very original form told the audience that the current basic law is simply useless, because many points are not spelled out in it, which, in the opinion of the expert, necessarily require clarification. In particular, Sulakshin says that it is necessary not only to indicate that Russia is a sovereign state, but also to carefully state what this very sovereignty is, because the absence of such a concept supposedly gives rise to the prosperity of all kinds of extremist organizations. In his “Constitution”, Stepan Stepanovich explains in detail what sovereignty is, and also gives detailed and frankly ornate definitions of other common notions. At the same time, the author himself is frankly proud that the new Constitution he prepared is three times more “old”, and, apparently, she should have more chances to turn out to be the main law in Russia ...

Of course, no one thinks to doubt the talent of Stepan Sulakshin, but, frankly, neither the “new Constitution” itself, nor many of its provisions, evoke proper piety. Here is how Mr. Sulakshin himself defines the “stuffing” of the prepared document and other authors from the organization he heads:

"A substantive and legal-technical methodology for constructing a constitution, which embodies an identical logical-mathematicized success algorithm applicable for each country, is proposed."

If this phrase is intended to explain to the ordinary average Russian the meaning of the new Constitution, then you can only say one thing: it's time to drain the water ... It is terrible to imagine how grandmothers will be separated from the shops at the entrances, or ordinary workers in the shops of the factories try to understand this document, which is “legal” -technical "and even in the appendage and" identical logical and mathematized. " Here, with the current basic law, the problems of understanding are present for many, and the work of the Center for Problem Analysis will be a complete stupor.

But even if we try to reject all this terminological plaque, which Stepan Sulakshin (the author of the draft of the “new Constitution”) skillfully presented, then many of the provisions of this document and in the usual reading raise questions.

Firstly, it is completely incomprehensible why the risk of extremism and separatism in Russia should come to naught if Stepan Stepanovich takes and even prescribes what “Russian sovereignty” is in his work. Are bearded terrorists hiding in the mountain forests of the North Caucasus, or their Saudi sponsors, conduct their anti-state activities, referring exclusively to the Russian Constitution? Like, aha! - there is no necessary definition in the basic law - it means, where are the suicide bombers there? - Here they all! But there would be definitions - then, no, no ...

Secondly, Mr. Sulakshin announces that the Constitution should prescribe a mechanism for public evaluation of the activities of the country's president with the possibility of public warnings about the incompatibility of the position. Based on these public assessments, in the opinion of the same author of the draft, it is possible to declare to the president three times that his work does not comply with certain defining norms and rules, after which he is called impeachment. However, in this case it is not clear what the “public assessment” means. It may be necessary to convene a popular assembly in the squares of Russian cities. But such, excuse me, “veche” we have lately been associated with far from the majority opinion, but with the far-fetched principles cast off from the outside. It may be that this is a parliamentary assessment of the president’s activities, but Russia is for the time being clearly not the country where the opinion of parliament embodies the opinion of the overwhelming majority of Russian citizens.

Mr. Sulakshin and others gathered agreed that, since the current Constitution was adopted in the 1993 year (in the Yeltsin era), it must be immediately dumped stories. The current Constitution was called frankly Russophobic, because the word “Russian” appears only once in it, and even then with reference to the concept “Russian language”. At the same time, everyone agreed on the opinion that the phrase “Russian people and other nations” should be used. This would supposedly be much more accurate in defining the essence of the Russian Federation.

No, of course, the idea of ​​promoting the Russian nation is understandable, because it was the Russian nation that acted and is the state-forming factor. But on the other hand, Russia is a multinational and multiconfessional state (true, according to the current version of the basic law). It is interesting how the authors of the new idea would react to the phrase “and other nations” if they themselves belonged to these peoples. It turns out that if the current Constitution is Russophobic, then it is also a Chechen-phobian, and Udmurtophobian, and Tatarophobian, as there are no references to these and other peoples in it. Then the new project is openly discriminatory. Yes, the concept of “representative of another nation” is clearly alarming for any adequate ethnic Russian citizen of Russia.

Interestingly, during the round table, the question was raised about the so-called Russian viability curve. According to the schedule presented in the consultative hall of the State Duma, where the round table was held, it turns out that today's Russia is at about the same level of social and political development and state viability, which corresponds to 1800 year ... In other words, our country, judging by historical analogies, very soon enters a large-scale war ... It’s hard to say where such “analytical” assessments came from, but this is not even the main thing. The main thing is that the United Russia deputy, reflecting on the information of the presented schedule, declares that it is necessary to change the Constitution, of course, but today the level of our political development does not allow it. They say that we are almost on the verge of a “Napoleonic” war, and therefore we just need to wait a little for its completion, and then go ahead, Mr. Sulakshin with his project ...

In general, you can continue to describe the events that took place during the discussion in the State Duma 11 of October 2012, but the fact is that it looked like all this strange performance. The performance is clearly delayed, since in the 140 minute one of its participants even "pecked a nose", apparently, under the flood of dreams about a new constitutional system of Russia ... At the same time, it is not even clear what the purpose of this performance is. After all, by and large, it was observed that those gathered in the building of the Russian Parliament calmly discussed plans for either a coup or pressure on the public to reconsider the principles of the existence of the Russian state.

It’s just that everyone who gathered at the same round table needs to be reminded that games to change the Constitution for any convenient and uncomfortable occasion do not lead to anything good. Even if there are any complaints about the existing basic law, then redrawing this law completely is a step close to counterproductive. In the end, if you write new Constitutions once in 15-20 years and once in 15-20 years to accept them, then our country will be thrown out of the fire and into the fire. What is the basis of sovereignty here ...