Defeat of Rommel's army at the Battle of Alam el-Khalfa 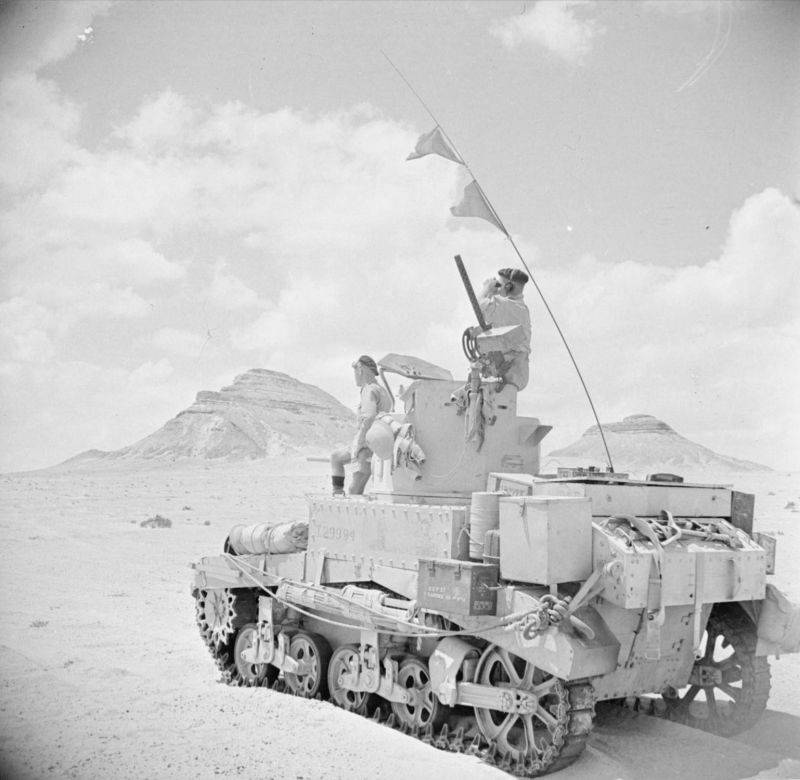 Situation at the front

After the first battle of El Alamein, there was a lull in the North African theater for some time. The German-Italian troops did not have the strength to develop success. The British were rebuilding the army after a heavy defeat and preparing for a counteroffensive.

The British 8th Army, which suffered a heavy defeat at the Battle of Gazala and lost Tobruk, was significantly reinforced at the end of July 1942. Two more armored divisions arrived in Egypt - the 8th and 10th (the 1st and 7th tank divisions had already fought in Africa), armed with Grant and Sherman tanks, 105-mm self-propelled guns. Two more infantry divisions were on the way - the 44th and 51st. The 8th Army received a significant advantage in forces and means over the German-Italian forces in North Africa.

The head of the British government, Churchill, under pressure from the public and the opposition, dissatisfied with the course of the war, visited Cairo in early August 1942 and held a series of meetings with the high command, including the commander in chief in the Middle East, Claude Auchinleck. Then the prime minister conducted an inspection of the 8th Army. As a result, Churchill replaced Auchinleck and other senior commanders. The former commander of British troops in Burma and commander of the 7th Army, Harold George Alexander, was appointed commander in chief. General Gott was appointed commander of the 8th armies, but on August 8 he died when his plane was shot down by the Germans. The army was led by Bernard Montgomery.

Montgomery commanded a division in the French campaign of 1940, covering the withdrawal of troops at Dunkirk. Then he prepared troops in England to repulse the German landing. He fought in Burma, but was appointed commander already in the conditions of the Japanese offensive, when the unprepared British troops were defeated. Montgomery was careful and punctual, prudent and a good organizer. The ambitious general aroused the envy of many senior officers. 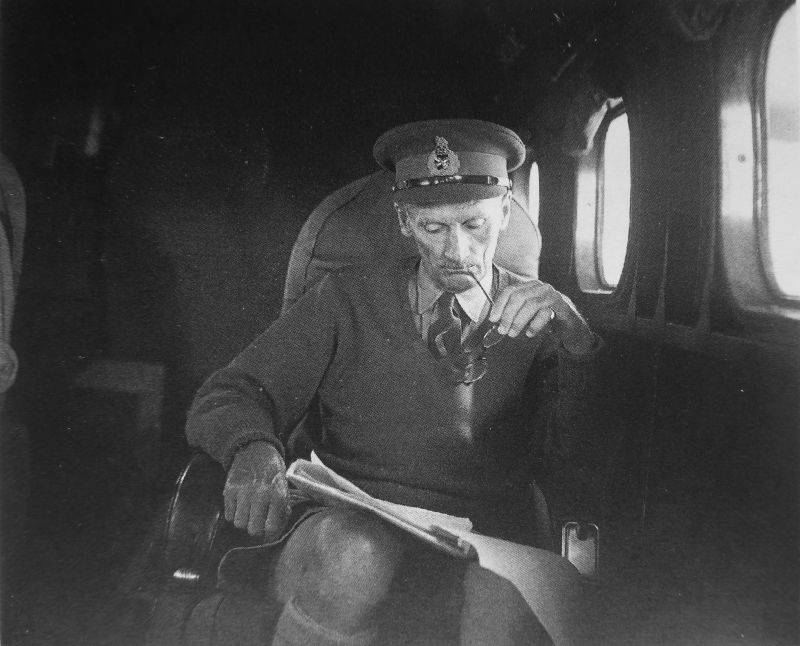 The British 8th Army was in position at El Alamein. The 30th Corps (9th Australian, 1st South African and 5th Indian Infantry Divisions, 23rd Armored Brigade) of General Lees occupied positions from the coast to the Ruweisat ridge. On the southern flank defended the 13th Corps of General Horrocks (2nd New Zealand Infantry and 7th Armored Division, the 21st Indian Infantry Brigade was in reserve on the Alam Halfa Ridge). In the rear, in the Nile Delta, was the 10th Corps and the newly arrived 8th and 10th Panzer Divisions, the 44th and 50th Infantry Divisions, which were in the process of replenishment.

Commander-in-Chief Alexander ordered Montgomery to prevent the enemy from moving further east and to prepare troops for the offensive. The new army commander began to prepare defenses on the Alam-Khalfa ridge, which was the most likely place for the next enemy strike. The 13th Corps was also replenished, the army reserves were strengthened. The disposition of the 8th Army was changed. General Wilson, commander of the 9th Army, which was responsible for Syria and Palestine and included the 50th and 51st Infantry, 1st Panzer Divisions, was tasked with defending the Nile Delta. The 10th Corps was transferred to direct subordination to the command of the 8th Army. Two fresh brigades of the 41st division were heading for the Alam-Khalfa ridge. The defense on the ridge was strengthened by dug-in tanks. The armored reserve - the 10th tank division and the 23rd tank brigade (a total of about 400 tanks, 200 anti-tank guns and 16 heavy 240-mm guns), was placed in the rear of the 13th corps.

Also increased anti-tank and wire obstacles, strengthened aviation support. Self-confident and tireless Montgomery, with the help of an active information campaign (attracted journalists, photographers, created something like his personal cult), was able to restore the morale of the army, greatly undermined by recent failures. The general became a "star" among the soldiers: he personally awarded the distinguished soldiers, punished the guilty, and reprimanded the officers. 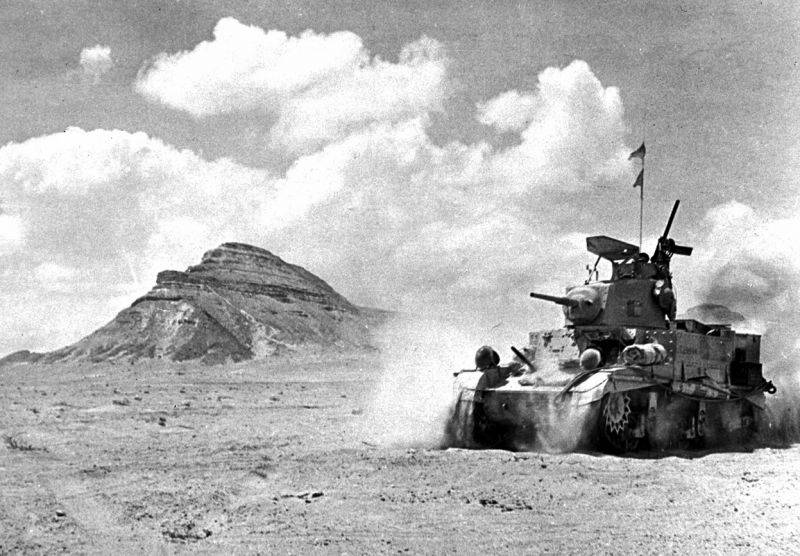 The German army was also recovering from heavy previous fighting. Rommel's army receives reinforcements. In August 1942, two infantry regiments were transferred from the "Crete" fortress division to the "Africa" ​​army group. On August 15, 1942, they became the basis for the formation of the 164th Light Infantry Division. They were followed by the elite 1st Chasseur Parachute Brigade with new tanks (more than 90 T-3 and T-4 vehicles with 75-mm guns).

At the end of August, in the Egyptian direction, Rommel had the 15th and 21st tank, 90th and 164th infantry divisions. More than 27 thousand soldiers, about 270 tanks, more than 320 anti-tank and field guns, 47 reconnaissance vehicles and more than 4 trucks. There was also army artillery: 800 thousand people, 7 anti-tank, 85 field guns.

Like Montgomery, Rommel personally oversaw the strengthening of the defense. The German commander planned a new offensive, with the traditional bypass of the British positions on the southern flank in order to encircle the main forces of the 8th Army, and a further throw to Cairo. The start of the offensive was scheduled for the end of August.

The Italian commander-in-chief, Field Marshal Bastiko, tried to solve the main logistical problem: the isolation of the tank army from the main supply bases by 2 thousand km. The Italians were able to increase the capacity of the ports of Tripoli, Benghazi and Tobruk, repaired the Sidi Rezeh-Mersa Matruh-El-Duba railway, and laid new branches. The Italian army was reinforced by several artillery groups, the Falgor parachute brigade, and the Pistola motorized division. The Italians tried to improve the organization and management of their troops, but these measures were clearly too late. 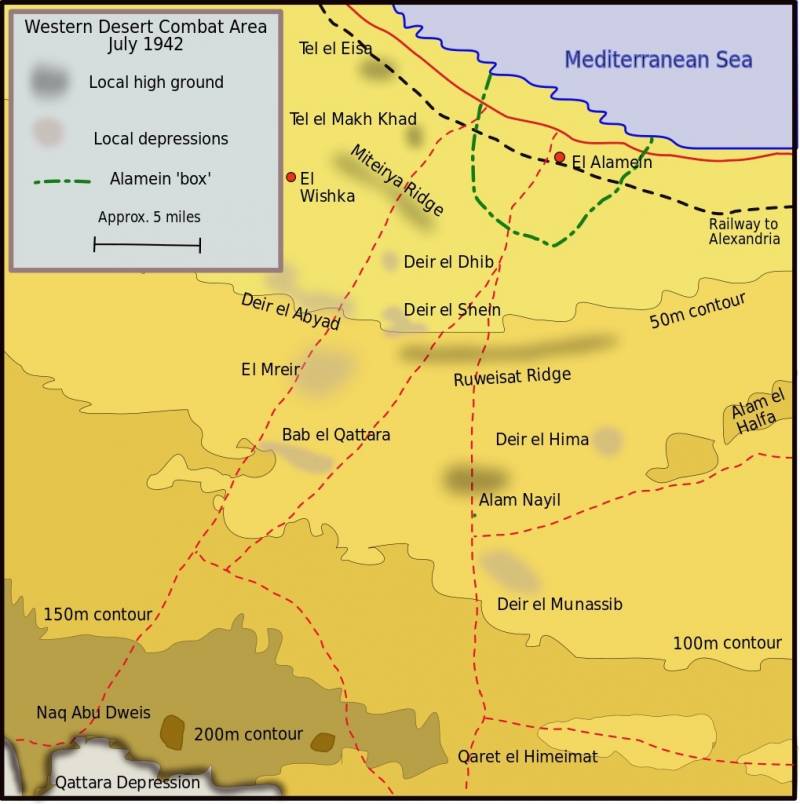 The El Alamein area in August 1942
However, despite the measures taken, the tank army was not in the best condition. There were not enough personnel, tanks and other equipment. Thus, the army had about 270 tanks against about 760 British vehicles. There was an acute shortage of fuel. By August 20, there were 8 thousand tons of fuel, and at least 30 thousand tons were required for the offensive.

The Italian fleet could not provide the transfer of the necessary cargo. The British Navy and Air Force destroyed entire enemy convoys in the Mediterranean. On August 28, a convoy was destroyed, which was carrying 6 thousand tons of fuel. This forced Rommel to reconsider the plan of the offensive operation and make it less ambitious: the second stage of the operation was abandoned, hoping only to defeat the British forces on the El Alamein line.

Rommel himself was seriously ill and offered Keitel to replace him with Guderian. The commander-in-chief of the ground forces said that Guderian was also ill, and a general from Mackensen's 1st Panzer Army would be sent to Africa. But he was too busy on the Russian front, and his assignment to Africa was postponed. Therefore, they wanted to transfer the army to Kesselring. Rommel, who had a low opinion of Kesselring, decided to stay in Africa despite his illness. 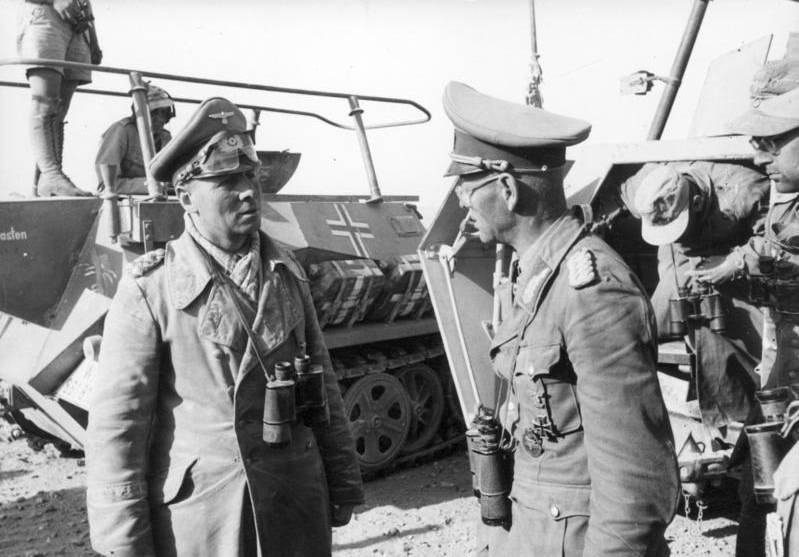 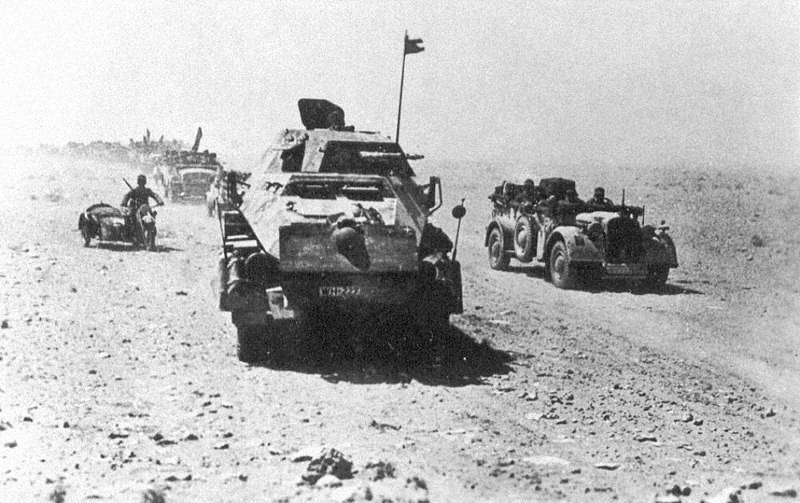 On the night of August 30, 1942, the last offensive of the German army in Africa began - Operation Brandung (Surf). On the left coastal flank was General Nering's African Corps. It included the 15th and 21st tank divisions. On the right flank was the Italian 20th motorized corps - the Arietta and Litorio divisions. On the far right was the German 90th division. The Germans planned to bypass the British from the south, go 30 km to the east, then turn north and strike at the rear of the main forces of the 8th Army between the coast and the Ruweisat ridge.

The British command, which had learned in advance about the enemy's advance from intelligence, was ready to repel the attack on its southern flank. The Alam-Khalfa Ridge had a strong anti-tank defense and a strong armored reserve in case of an enemy breakthrough.

From the very beginning, the Germans were unlucky. The advancing columns of the army ran into a large minefield at the southern end of the Ruweisat ridge. German intelligence did not reveal this position in time. The minefield was defended by well-entrenched British troops. All night from 30 to 31 August there was a stubborn battle. German sappers tried to make passages in the minefield. At night, flares appeared in the sky, and the Royal Air Force began to strike at the German troops. General Nering was seriously wounded and evacuated to Germany. The African Corps was led by General Bayerlein, then von Furst. 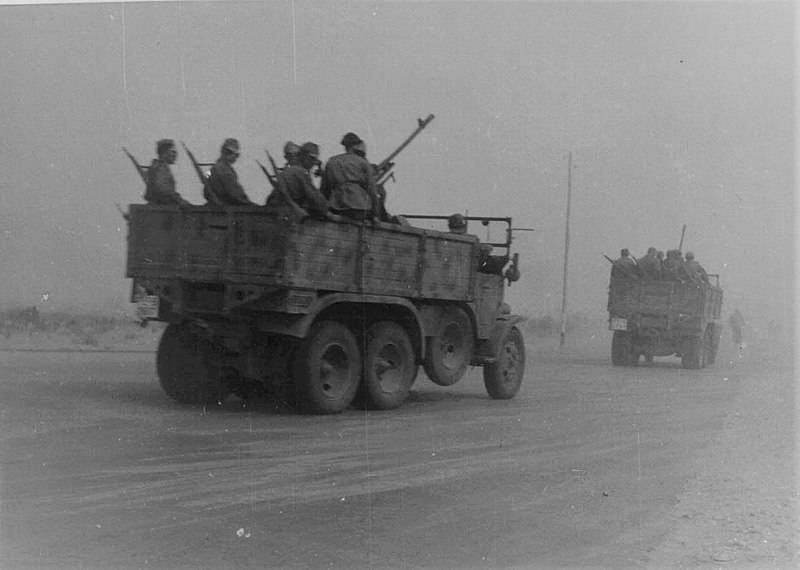 On August 31, German tanks passed through the minefield. The British 7th Panzer Division retreated. The Germans advanced despite British air raids and quicksand. By 11 o'clock the German tanks reached the ridge and at 13 o'clock stopped for refueling. Due to the sandstorm, the British Air Force was inactive. The Germans were able to calmly reach the southwestern part of the ridge, where they ran into a strong defense of the British 2nd Armored Brigade. The commander of the 21st division Georg von Bismarck was killed in the battle.

Rommel ordered a retreat to the south. The retreating columns were bombed by British planes, artillery fired. Montgomery deployed the 10th Panzer Division between the Alam Halfa Ridge and El Alamein and ordered the South African Brigade to occupy the Ruweisat Ridge.

On September 1, the Germans made another attempt to break through, but were stopped. In the evening, the commander of the 15th Panzer Division reported that the fuel was running out. This forced Rommel to stop the offensive. The situation was dangerous: communications were stretched, fuel was running out, the Afrika Korps was constantly bombed, and he could be trapped between the ridge and the Kattar depression. However, on September 2, the Germans calmly left, since the British command, instead of a counterattack, was regrouping troops. Rommel justified the Panzerarmee's retreat with a lack of air support and lack of fuel.

On September 4, Montgomery ordered the New Zealand Division to attack the enemy. But this decision is already too late. The Germans had already retreated to well-fortified positions reinforced with anti-tank guns. The British suffered heavy losses in fruitless attacks.

Thus, the British army repelled the advance of Rommel's troops. Montgomery won the first victory, although he was cautious and did not develop success. The morale of the 8th Army was revived. Rommel, not receiving strong reinforcements from Europe and having big supply problems, was deprived of the opportunity to launch a new big offensive. The British, constantly building up the forces and means of the 8th Army, were preparing for a decisive offensive operation. 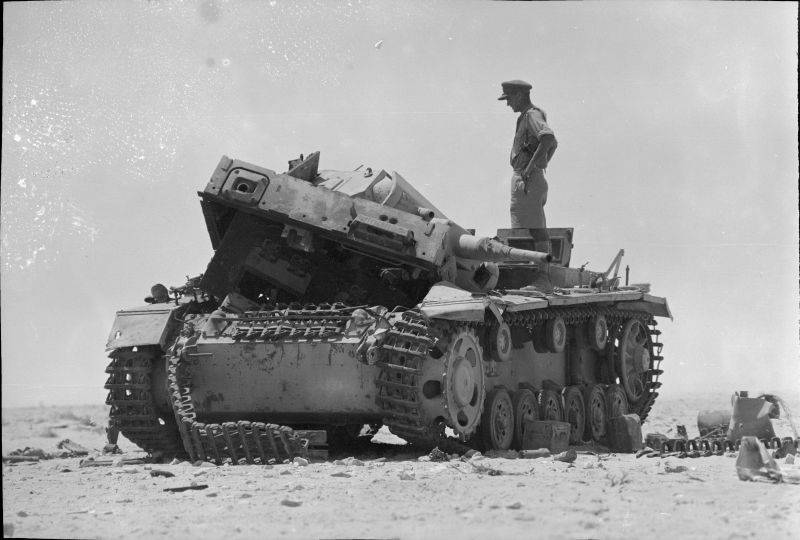 A New Zealand officer on a destroyed German Pz. Kpfw. III in the Western Desert. September 1942