- What machine gun do you have?
“It’s called something weird,” said the gypsy.
- That's it, flew out of my head!
Must be a light machine gun, Robert Jordan thought.
- And what is his weight? - he asked.
- You can carry it alone, but it's very heavy,
with three folding legs. We got him
on our last major outing. Before wine.
How many ammo for it?
“Death,” said the gypsy. - A whole box
such that you can't move.
Ernest Hemingway "For Whom the Bell Tolls"
stories about weapons. And it so happened that the Austrian officer, Baron Adolf Odkolek von Augezd (1854–1917) became interested in the design of weapons and in 1889 received his first privilege for a machine gun with an automatic drive from powder gases acting through a hole in the barrel on a piston connected to the bolt.

In addition, unlike the Maxim machine gun, which was gaining popularity at the same time, it had air rather than water cooling of the barrel. As a result, Odkolek received several patents for his developments, tried to create a workable model of his machine gun on their basis in Russia, but ... for some reason, nothing came of it, and it all ended with the fact that he decided to offer his developments to the Hotchkiss company . 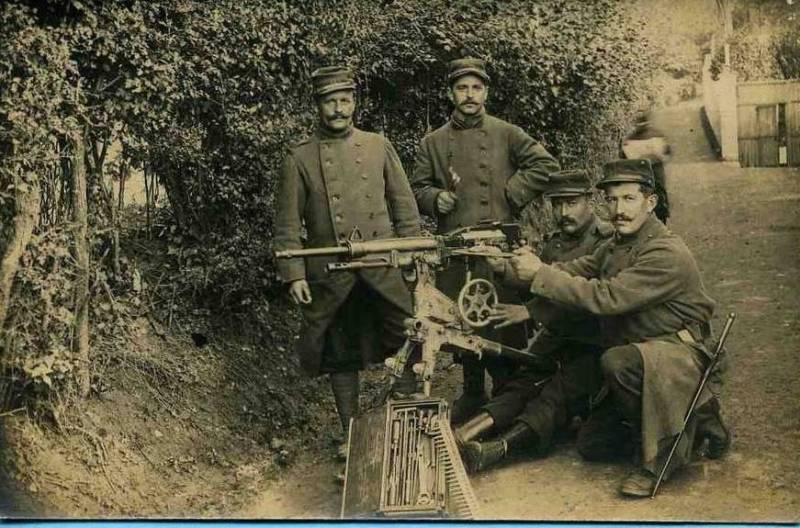 The same machine gun in the photo of those years, only the situation is clearly not combat ...
Hotchkiss himself had already died by this time, but the engineers Vincent Benet and Albert Merce, who worked at his enterprise, appreciated the work of the baron, bought all the patents he registered from him and already in 1895 created a working model of the machine gun of the Odkolek system, which they themselves improved in 1897. 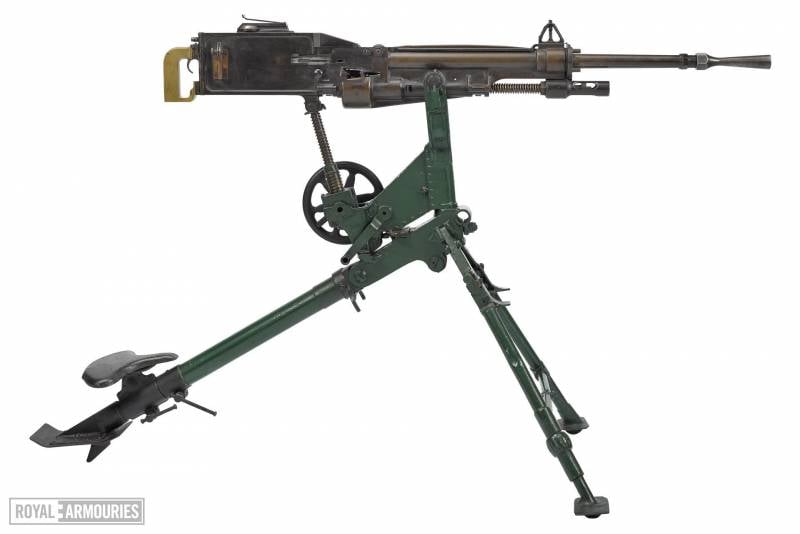 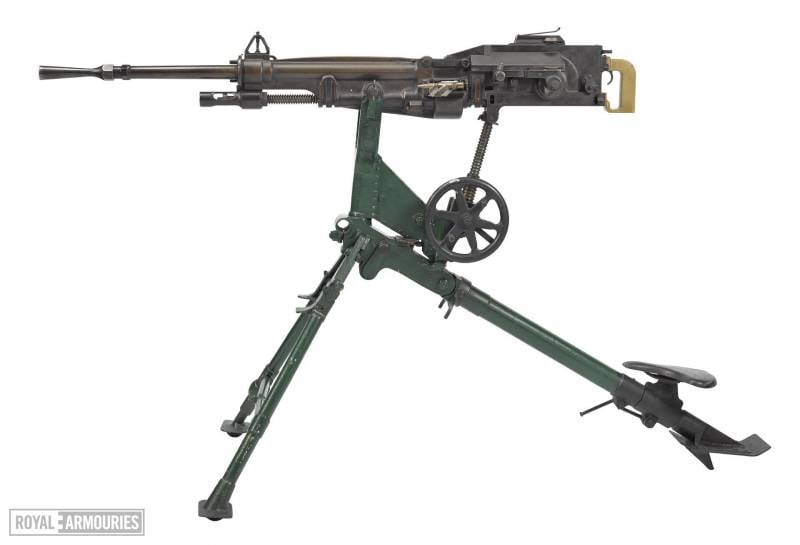 The same gun. Left side view
In the meantime, smelling the smell of big money, other French gunsmiths were drawn to the creation of their own national machine gun. And while Benet and Merce were step by step bringing their machine gun to mind, the National Arsenal in Puteaux in 1905 released its own version of the Odkolek and Hotchkiss machine gun. To circumvent the patents they had in their hands, the engineers of the arsenal came up with a machine gun with a muzzle retractable forward, which, when fired, was pushed by the powder gases coming out of the barrel.

The muzzle was connected to the bolt with a long rod through a gear wheel and, when it went forward, the bolt moved back accordingly, and a spring returned it to its place. It was possible to get a rate of fire of 500 rounds per minute, however, despite this, the machine gun turned out to be complex, heavy and capricious and, although it was fired, immediately hit the colonial troops. 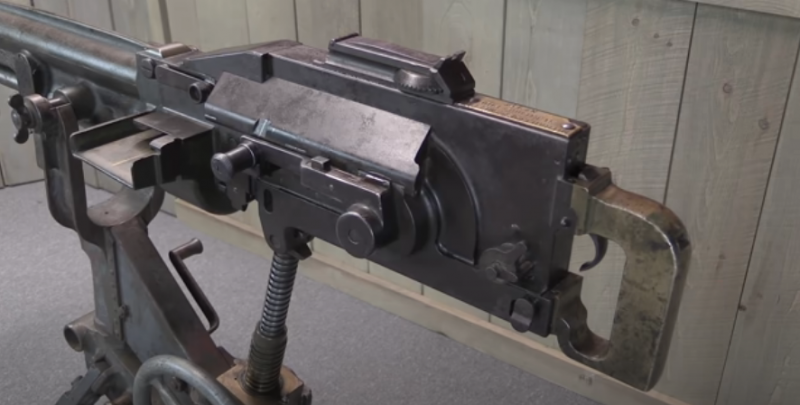 The machine gun box was wider than that of the Maxim, but narrower. The photo clearly shows the cocking bolt handle, the brass handle (hollow inside!) And the fire rate retarder switch. Photo forgottenweapons.com
In another attempt to improve existing machine guns, the officers of the Saint-Etienne Arsenal in France created the so-called "Saint-Etienne" model of 1907. This weapon was a compromise between the Puteaux 1905 and the Hotchkiss 1900. But the most interesting thing about its design is that its creators decided to bypass the patent of Odkolek (and Hotchkiss) and changed the direction of the gas mechanism of this machine gun. 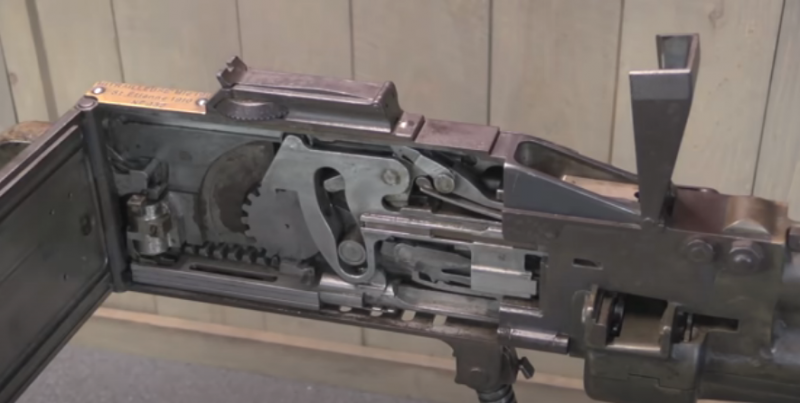 The device of the internal mechanism: a rack with straight teeth, a massive gear wheel with a crank, a door and a sight. The USM trigger lever and its spring are located not quite usually, namely above the bolt! Photo forgottenweapons.com 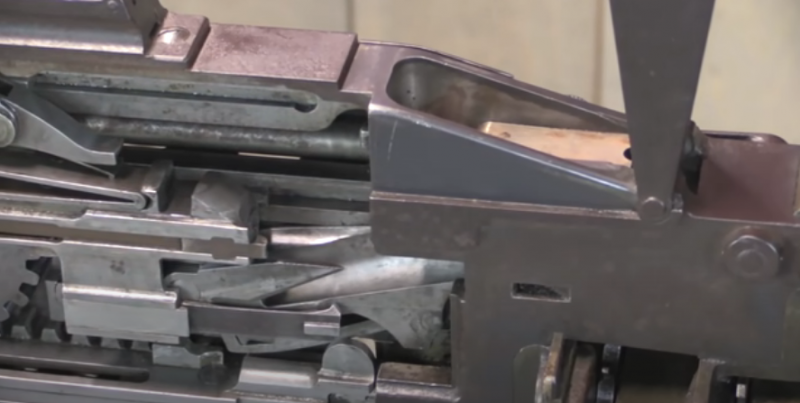 In this photo, the shutter is moved back. The bolt extractor tooth is visible. Below it is the feeder tray, raised up, and another extractor plate with a “tooth”, which removed the cartridges from the tray if necessary. Photo forgottenweapons.com
Instead of pushing the piston back to provide a source of energy to operate it, the gas exiting the bore pushes the piston forward. The piston is attached by a spring-loaded rod to the gear rack. The rack moves forward and drives a massive gear wheel connected to the bolt by means of a crank mechanism. Accordingly, there was a figured groove in the shutter, which included the roller of this crank.

When fired, the gases push the piston forward, compressing the spring and causing the spur gear to rotate clockwise. The roller on the gear rotates with it half a turn, pulling the bolt back. Then the spring, put on the piston, pushes it forward and returns the shutter to the forward position.

Under the bolt is a feeder tray, similar to a similar part in the Winchester rifle. It is hit by cartridges from a metal cassette at the moment when it is located strictly horizontally. When the bolt moves back, it moves with it, while its front part rises to the level of the bore hole. When the bolt moves forward, it sends a cartridge into the chamber, and the feeder tray lowers again to receive the next cartridge from the cassette. The shot was fired from an open shutter. The shutter itself only pressed the rim of the cartridge case against the chamber. The locking of the trunk was not carried out.

The bottom of the box had holes for ventilation. And ... so that the dirt that gets into it spills out of it. To what extent such a decision was justified is difficult to say. Photo forgottenweapons.com
The machine gun is easy to distinguish by the heavy and massive brass casting of the receiver. The drive spring, located under the barrel and behind the gas piston, is also clearly visible and not covered by anything, in order to eliminate, if possible, the thermal effect from close proximity to the heated barrel casing. 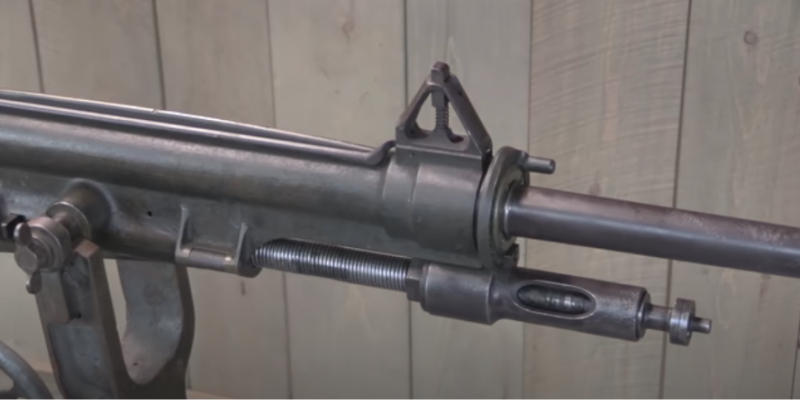 Gas piston after firing. Photo forgottenweapons.com
Despite the rather lengthy description, the design of the Saint-Etienne machine gun itself came out not much more complicated than that of the Maxim. Moreover, the designers did everything possible to make it convenient to work with their machine gun. So, it was more convenient to operate with a trigger than with a trigger with two handles. The cocking lever on the left was similar to the handle of a meat grinder, and it worked the same way, moving 180 degrees in a horizontal plane. Access to the mechanisms in the machine gun box was the simplest - an ordinary hinged door.

A device was provided that allows you to change the rate of fire from eight to 600 rounds per minute. This was considered a useful feature in colonial wars when ammunition was in short supply and ambient temperatures were too high. The tripod, equipped with a bicycle seat for the shooter, was also convenient. It would seem that everything was thought out. Massive parts, however, added weight to the machine gun, so that, despite the lack of water cooling, it still weighed more than the same English Vickers, but there was simply nothing to break in it. But still… 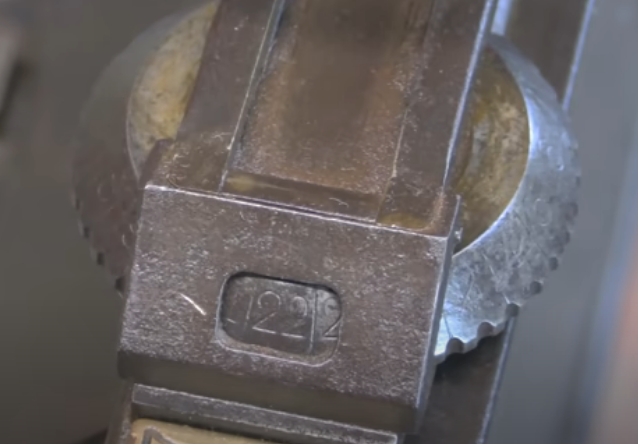 The sight was very reasonably arranged. The set range figures appeared on this screen. Photo forgottenweapons.com 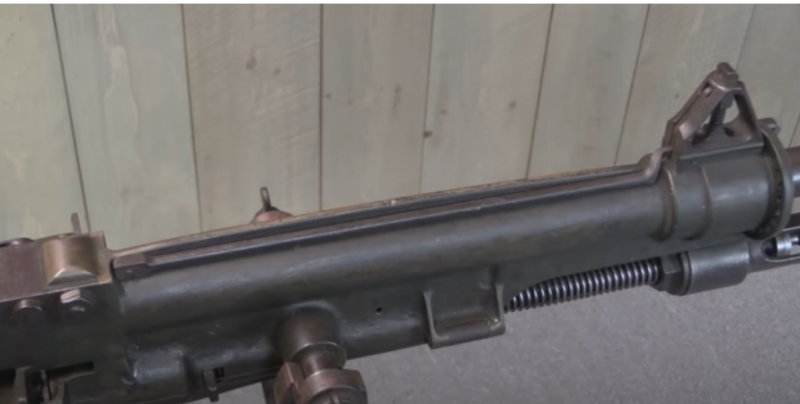 Traction of the automatic thermal compensator of the front sight. Warming up from the casing, she lifted it with the L-shaped end! Photo forgottenweapons.com
Very soon after the start of operation, "Saint-Etienne" gained a reputation for being unreliable. Without water cooling, like the Maxim, or a massive brass radiator, like the Hotchkiss, it overheated. The overly complicated rack and pinion piston had many parts and had to be kept clean to avoid delays. The spring, openly located under the barrel and subject to all misfortunes, turned out to be short-lived. 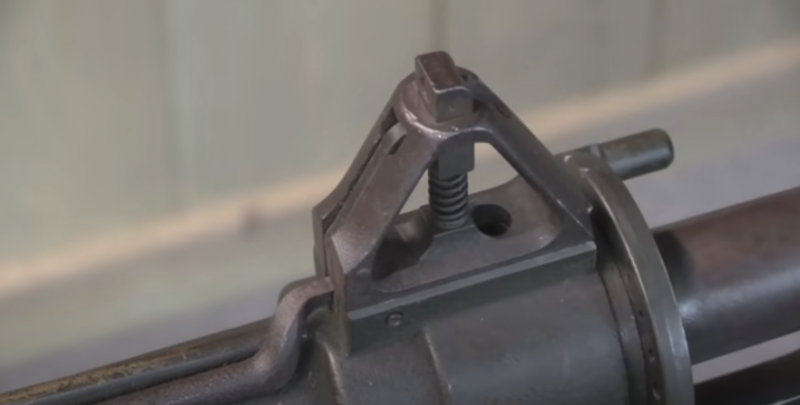 In this photo, this l-shaped lever and the spring-loaded front sight are just clearly visible. Photo forgottenweapons.com
In general, the French soldiers who encountered this machine gun in the trenches of the First World War did not like the Saint-Etienne. Perhaps he seemed to them, yesterday's peasants, too complicated, requiring super-careful care.

As a result, the machine gun was modernized in 1916. He received the possibility of ammunition from a metal tape for 300 rounds and new sights with an automatic front sight height adjuster. Prior to this, heating the barrel casing, on which the front sight was located, could change the point of impact of the bullet, which is also a serious drawback of the machine gun. But, despite all the improvements, the Saint-Etienne machine gun in the troops still replaced the Hotchkiss M1914 machine gun. 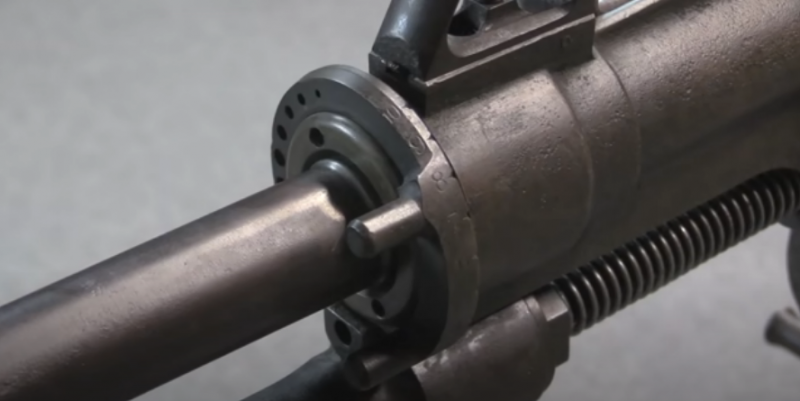 A disk with holes of different diameters blocked the hole for the exit of gases from the barrel. It could be turned by the handle protruding from it and thus set the desired degree of pressure on the piston. Photo forgottenweapons.com

By the beginning of 1917, 39 machine guns of this type had been manufactured.

An absolutely amazing detail, which, by the way, was soon abandoned. Flame Hider! He screwed on the trunk. The gases from the barrel rushed after the bullet, but inside the flat funnel they expanded and were thrown down, resting against the metal apron. Initially, it was believed that such a device would avoid blinding the shooter with flashes of shots and make it easier for him to observe the target, but ... this device raised so much dust that they immediately began to remove it from machine guns! Photo forgottenweapons.com
In July 1917, these machine guns were gradually withdrawn from the first line units and transferred to the rear units, colonial troops, as well as the Italian army, the Greeks, and another part was sent to Russia as military assistance to Admiral Kolchak.

In general, it's amazing, of course. The design thought out to the smallest detail, including those that make life easier for the calculation, the machine gun parts are durable, and they did not spare brass on it, that is, there was nothing special to rust there, but for some reason a good machine gun from Saint-Etienne did not work out ...