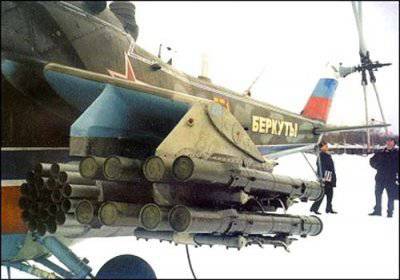 The main purpose of the Ataka-V aviation missile system is to defeat modern tanks, BMP, launchers of missiles and anti-tank missiles, long-term firing points such as bunkers and bunkers, low-speed low-flying air targets and enemy manpower located in shelters.

The Ataka-V missile was created on the basis of the 9М114 missile of the Sturm-V missile system using a more powerful engine, allowing to increase the range of the complex, as well as a more powerful warhead, which had a greater armor penetration.

Mi-24V helicopters at the end of the 1990-ies. upgraded to ensure the use of new Igla-B and Ataka-B missiles. The helicopter, equipped with a modernized weapon system, was assigned the designation Mi-24ВМ (the export version was designated Mi-35М).

The composition of the aviation missile complex Ataka-B.

The rocket complex is implemented aerodynamic scheme "duck". The rocket has a semi-automatic guidance system on the radio link. The control equipment is the "Rainbow-III". In order to ensure the possibility of conducting combat operations at night, the design bureau of the Krasnogorsk Mechanical Plant (Zenit) for the Mi-24H developed the Top viewing system with a laser rangefinder, television, optical and thermal channels. The Thor system is also used to target an anti-tank guided missile.

After the helicopter crew makes a decision to launch a rocket, the operator (navigator) combines a fixed tag and a target, and then presses the start button. Thus, the adjusted program guidance is selected. As a result, the laser rangefinder automatically measures the distance to the target. The obtained data is presented on the multifunction display together with the data on the necessary maneuver in order to bring the helicopter to the zone of admissible launch. The pilot leads the helicopter in such a way that the driving mark of the target is in a fixed square. The operator checks that the fixed mark and target are combined, and, if necessary, makes adjustments by manipulating the control levers. [/ center] After the helicopter reaches the zone of allowable launch, the digital computer sends the command "reachable" to the multifunction display. The operator on this command launches the rocket. During the flight of the helicopter, the operator keeps the fixed mark and target on the display combined and, if necessary, aligns the position of the line of sight, manipulating the control levers until the missile hits the target. A helicopter during this process can maneuver with roll up to 30 degrees and a yaw angle up to 110 degrees. 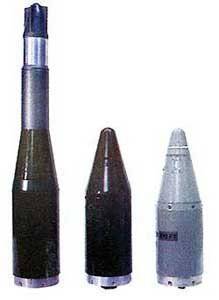 Three variants of the "Attack" anti-tank guided missile are delivered:
- 9М120 (9М120М, 9М220) with a tandem cumulative warhead, which overcomes dynamic defense and homogeneous tank armor;
- 9M120F having a high-explosive warhead. Designed to destroy unarmored targets. Especially great damage caused by undermining in confined spaces (buildings, bunkers, etc.);
- 9М220О having a fragmentation warhead and designed to defeat aircraft. The rocket is equipped with a proximity fuse that reacts to an air target when flying at a distance of up to 4 meters from it.

The most effective use of guided missiles "attack" at distances 800-4000 meters. In this case, the helicopter is located in the zone of least vulnerability at low altitude. The probability of hitting a tank at a distance of 4 thousand m - 0,65-0,9.

The launch tube is a guide for the rocket, and also serves as a container for its storage and transportation. Start type - from TPK using an expelling charge.