October 19 2012
3
After the defeat at Polotsk, the 2 of the French corps retreated and on October the 17-19 (29-31) of the United Corps joined the Ole to the 9 corps of Marshal Victor (Claude-Victor Perrin). This increased the morale of the French troops: the soldiers of the 2 Corps were delighted with the connection with significant reinforcements and wanted a rematch, while the troops of Victor, who had not yet participated in the battles, wanted to distinguish themselves. Victor's corps, which entered Russia only on September 3 as a reserve, was in excellent condition. The troops of the 6 Corps, though they were exhausted, but passed the test of battle.

18 (30) October, the division of the Merle took the position of the Chashnikov. Prince Yashvil, with the vanguard of the army of Wittgenstein, was stationed near the French and reported on the readiness of the enemy to fight. Indeed, Victor, concentrating most of the forces of the two corps at Chashnikov, was ready to give battle. He also gave instructions to the troops, who had not yet managed to concentrate at Chashnikov, to arrive with them as quickly as possible. Such an order was received by Herman Dendels (under his command there were two divisions), which went from Beshenkovichi and cavalry. Dendels came to the river Lukoml on the night of 18 on October 19, but with only one division - the division of Legrand was detached to Bochaikov. And the cavalry acted only in the morning of October 19. Victor, deprived of the aid of 4 thousand infantry and 2 thousand cavalry, postponed the attack until all his forces were concentrated.

General Peter Wittgenstein, unaware of the emergence of a fresh Victor corps, decided to launch the October 19 (31) attack. His troops were located behind the vanguard of Yashvil in 3 versts near the village of Sloboda.

Victor's troops were located on both sides of the river Lukomli. The divisions of Merle and Meson stood in the first line, in front of Chashnikov, on the right flank towards the r. The left, the left, rested against the forest (it was occupied by the French infantry), and the forces of the 9 corps were at the heights of the right bank of the river. Communication between the French troops served as a dam at the Smolyantsy manor, in 2 versts from Chashnikov. At the forefront, the French had up to 10 thousand people.

Lev Yashvil, having received an order to attack the enemy, with the dawn of 19 (31) in October, moved his forces into battle - 13 battalions, 3 militia, 15 squadrons and 2 Cossack regiments with 28 guns. The Cossacks shot down enemy posts, then in 7 hours of the morning Prince Yashvil with the 5 th Jäger battalions crossed the river and attacked the French, who occupied the town. However, he met strong resistance from a numerous enemy and was forced to withdraw.

Soon the main forces of Wittgenstein arrived: the Steingel corps lined up to the right of the avant-garde, and the Berg corps remained in reserve. Yashvil again attacked the French in Chashniki and ousted the enemy from there. At the same time, with the attack of the avant-garde infantry, the Grodno hussars on the right flank overturned the enemy's cavalry. In addition, Steingel attacked the enemy in the forest, but was repelled. He repeated the attack by already large forces and sent around the rangers, dragoons and hussars. The French were forced to clear the forest and pursued by the Consolidated Dragoon and Consolidated Hussars, retreated beyond the river Lukoml. For the river also moved the troops of the right French flank.

At this time, Wittgenstein learned from the prisoners that Marshal Victor had come to the aid of the 2 Corps and did not begin a decisive offensive. After the retreat of the forces 2 th corps for the river. Lukoml, they are located on the left flank of the troops of Victor. The forces of Jashvil and Steinheil rose up against the French troops, Berg's corps and cavalry remained in reserve. Subsequent actions were limited to artillery fire. Russian artillery suppressed several enemy positions. Towards evening, the division of Legrand joined Victor's troops.

The next day the enemy troops retreated. Saint-Cyr, to whom the wound received near Polotsk prevented him from participating in this battle, was displeased with the actions of Victor. He believed that the troops of the 9 corps were to support the forces of the 2 corps located in the first line and launch a general offensive against Wittgenstein. In the battle of Chashniki, our troops lost about 400 people. The enemy only captured lost more than 800 people, only about 1200.

This victory had an adverse effect on the French army. Victor was unable to push the forces of Wittgenstein beyond the Western Dvina line and thereby ensure the safe retreat of Napoleon’s army. Wittgenstein is even closer to the main communication of the enemy. There was an opportunity for joint action with Chichagov and Kutuzov. 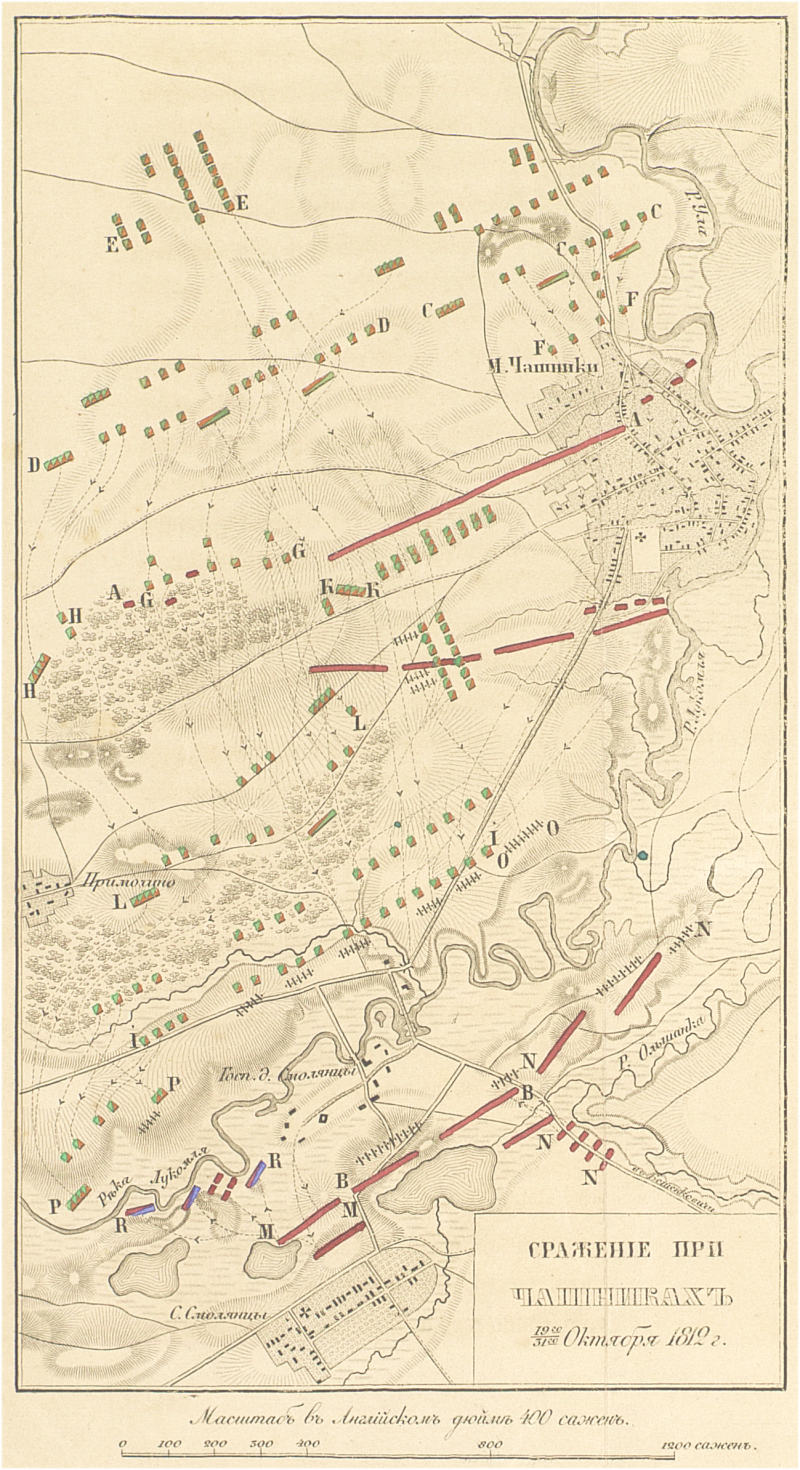 After the battle of Chashniki, General Wittgenstein transferred his troops to the right side of Uly and placed them at Chashnikov to give them rest and to receive news of the movement of Chichagov’s army. Part of the cavalry was sent to observe the enemy. Wittgenstein, due to the retreat of Victor, was able to send troops to Borisov, Minsk and Vitebsk. But his main forces remained in the occupied positions until 1 (13) in November. A detachment of Major General Vasily Ivanovich Garp (2 battalion, 2 squadron with 2 guns) was sent to Beshenkovichi. Consolidated hussar regiment sent to Lepel to observe the remnants of the Bavarian corps in Glubokoye. Avangard Alekseeva is located on the roads in Senno and Vitebsk.

Wittgenstein, on the basis of a general plan of action of the Russian armies, was instructed, after ousting the enemy troops from Zapadnaya Dvina, to free Vitebsk. There were large military stores there and Napoleon wanted to stop the troops there for the winter. To solve this problem, a detachment of Garp was detached, which was reinforced by 2 battalions, 2 squadrons, hundreds of Cossacks and 4 guns. October 25 (November 6) the Garp unit entered the Old Village and the next day moved on the right side of the Dvina to Vitebsk. Lieutenant Colonel Nikolay Stolypin was sent along the left bank of the river with 2 squadrons of the Yamburg Uhlan regiment. Both groups approached Vitebsk at dawn on October 26 (November 7).

The enemy was taken by surprise, but acted swiftly. The guard at the Polotsk outpost crossed the left side of the Dvina and set fire to the bridge. The advanced forces of the detachment Garpe tied an exchange of fire with the enemy. Soon, Garpe arrived in time with the main forces, and a squad of a horse company of second lieutenant Sukhozanet 2-nd cleared nearby buildings from the bridge. Volunteers from the 26 th eger regiment and the 7 squad of the Petersburg militia ran across the burning bridge to the left side. Some began to pursue the French, others put out the fire. Russian troops ousted the enemy from the city. At the same time, the enemy at the exit from Vitebsk was attacked by a detachment of Lieutenant Colonel Stolypin. In addition, he defeated several hundred Frenchmen who took up a position at some distance from the city.

Garpe squad lost 44 man in this battle. About 400 of the French were captured, including the Vitebsk governor, Brigadier Pouget, and ten headquarters and chief officers. The city was captured large reserves of food.