Self-propelled mine Gnom Kamikaze: Ukrainian implementation of an unsuccessful concept 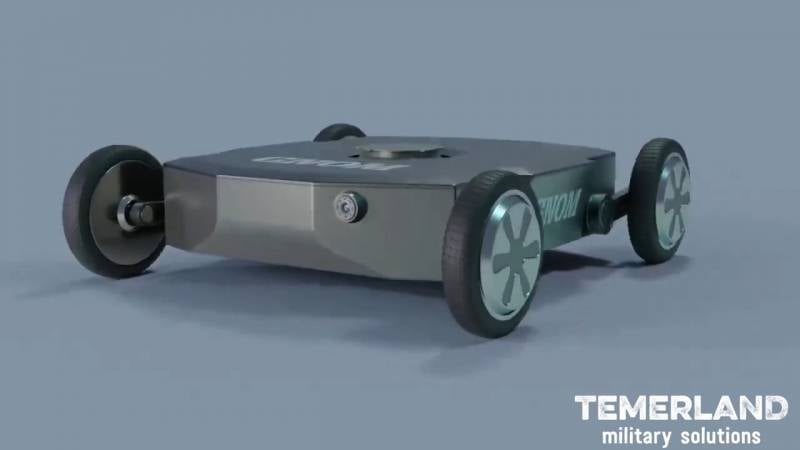 Gnom Kamikaze mine in working configuration

Despite the predictable result, Ukrainian enterprises are still trying to develop new weapons and military equipment. So, earlier it became known about the development of a project with the speaking name Gnom Kamikaze. He offers a curious design of a self-propelled anti-tank mine and a robotic minelayer unified with it. At the same time, the value of such a development is questionable.

The new project was developed by the Kyiv company Temerland Military Solutions. Previously, she repeatedly offered certain robotic systems, and even boasted that some of her developments were being tested in Ukrainian formations. Now the company is busy with new concepts.

In mid-May, the company presented a short commercial dedicated to the new project Gnom Kamikaze (“Dwarf Kamikaze”). It showed a self-propelled mine based on the existing Gnome platform and available anti-tank munitions.

In mid-July, a similar video was shown with another development of this kind. This time, a mine delivery vehicle was made from a wheeled robotic platform. Instead of built-in ammunition, they proposed using a system for transporting and dropping such weapons. 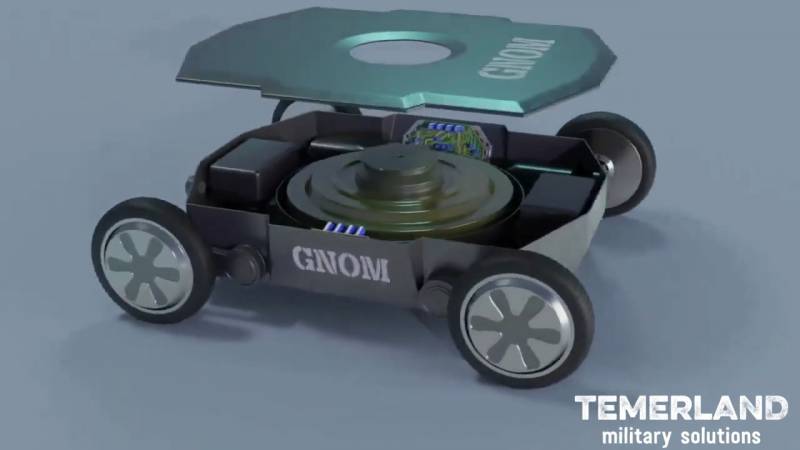 Lid up - layout demonstration
25 of August news The Gnom Kamikaze project was published by Forbes. From the development company, it learned that self-propelled mines had passed the design stage and reached production. The equipment is already being produced and transferred to unnamed Ukrainian formations. It is assumed that in the near future they will be used in a combat situation.

Despite the claimed existence of real samples, their photographs are not given. The company-developer is still limited only to computer images of equipment. In addition, nothing is yet known about the use of new mines.

The aim of the project was to create a self-propelled robotic platform capable of carrying an anti-tank mine. The possibility of using other payloads is also not excluded. The advertising materials feature another version of the platform, capable of carrying and dropping a mine - such a minelayer, unlike the basic sample, will not be disposable.

It is assumed that Gnom Kamikaze products will be present at given positions and expect the appearance of enemy armored vehicles. When it appears, the operators will direct the mines to the targets and undermine them. A similar task, but with its own specifics, will be performed by unified minelayers. It is proposed to use unmanned aerial vehicles to detect armored objects and lay mines. 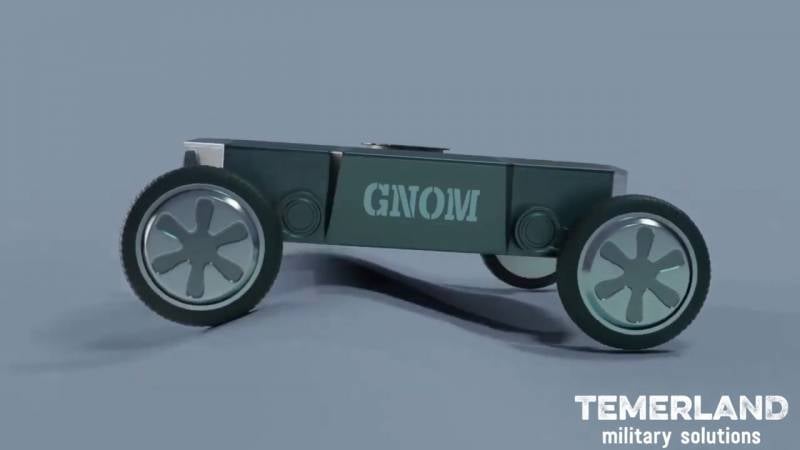 Overcoming an obstacle with a controlled suspension
The Gnome Kamikaze is reported to be easy to operate. The basic course of the operator is also not difficult. However, to organize complex operations with actions at a great distance, etc. additional preparation may be required.

Forbes compares the Ukrainian development with the German Goliath heavy self-propelled mine from World War II. This weapon had a number of serious shortcomings and did not live up to expectations. The developers of the "Gnome" believe that their product is devoid of such shortcomings. Attention is paid to various issues, incl. disguise.

platform with a mine

In terms of design, the Gnom Kamikaze is a remote-controlled self-propelled platform. The published images show a product with a flat body on four wheels. An anti-tank mine, electrical components, controls, etc. are placed inside such a case. At the same time, the exact composition of the equipment is not reported.

The TM-62 mine is used as the main combat load. It is made in a cylindrical body with a diameter of 320 mm. Depending on the type of fuse, the height of such a mine is 110-130 mm. The dimensions of the mine allow us to imagine the approximate dimensions of the "Gnome". So, the length and width of the body should be in the range of 600-700 mm. Case thickness - approx. 100-110 mm. The wheeled chassis increases the dimensions.

Apparently, Gnom Kamikaze has an electric drive. Batteries are installed inside the case next to the mine; there are also propulsion motors. Chassis includes four wheels on balancers with controlled suspension. Perhaps, motor-wheels are used to simplify the layout of the platform. 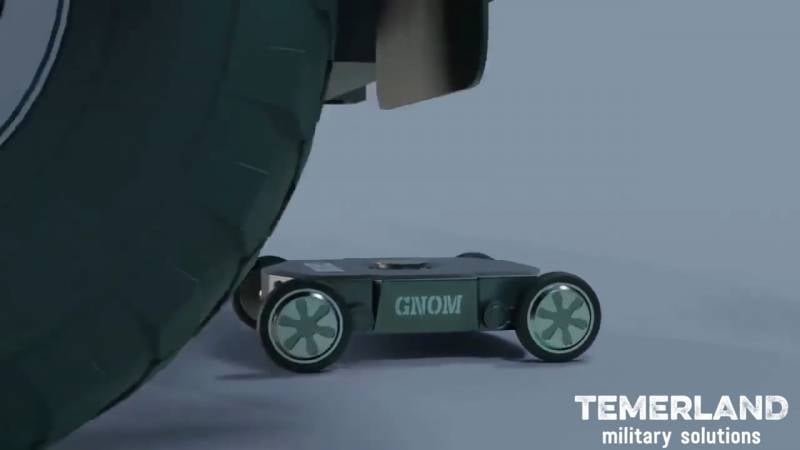 Mina drives under the target
The platform has a remote control and is controlled by the operator by radio. How exactly the operator should monitor the condition and location of the product is unknown. Perhaps the mine has its own optics. In addition, they talk about the possibility of tracking mines using a separate UAV. At the same time, as stated, the management of a mine can be mastered in just a few minutes.

The range of the complex, according to Forbes, is "about half a mile" - 800 m. Using an additional repeater allows you to double the range.

The TM-62 anti-tank mine is used as a warhead. This product weighs 10 kg with an explosive charge of up to 8 kg. A pressure fuse with a force of at least 200-250 kg is normally used. In the Ukrainian project, the pressure fuse is supplemented with an electromagnetic one that reacts to the field of an armored object. In addition, the operator can give a command to undermine. The fundamental possibility of installing other mines, incl. anti-personnel.

The robotic minelayer is as similar as possible to the Kamikaze Gnome, but has noticeable differences. So, its body is thinner and accommodates only the necessary units. At the same time, a cargo platform for laying mines is placed on the roof. The platform is made swinging, which allows you to unload the mine on the ground according to the principle of a dump truck.

It is quite possible that Temerland did develop and manufacture a number of its own self-propelled mines - there is nothing complicated in their design. Such products could have ended up in Ukrainian units in the combat zone. However, the practical value and necessity of such developments is questionable. 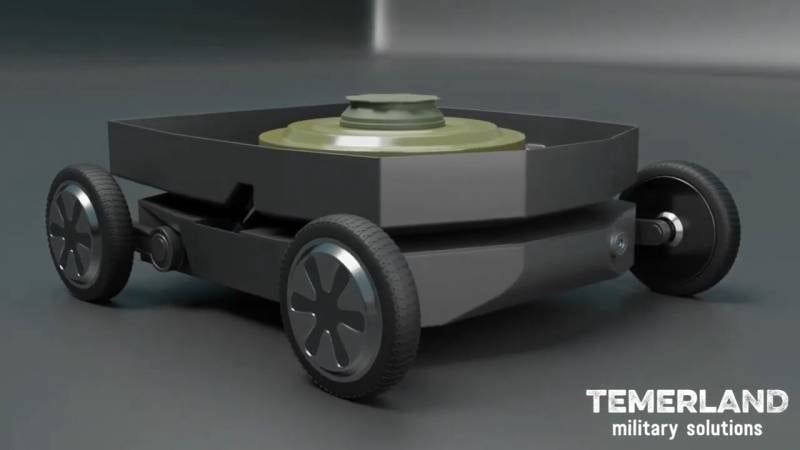 Reusable minelayer
A light wheeled platform is really capable of transporting a mine and "rushing" under an enemy armored vehicle. At the same time, effective work of this kind is possible only under ideal conditions, while the real battlefield will impose various restrictions and create problems.

So, the operator must constantly monitor the mine and the target. To do this, optical or technical means must be used. Visual observation is not always possible or unsafe. The enemy can notice the approaching mine in time and destroy it. Satellite navigation and telemetry transmission also do not solve all problems, because signals can be suppressed with known results.

Raises questions wheel undercarriage lowered profile. The patency of such a chassis on the ground can be very limited. Accordingly, the "Kamikaze Dwarf" may encounter insurmountable obstacles in the form of bumps, ditches, embankments, etc.

The range of a self-propelled mine does not exceed 800 m. Because of this, the operator must be directly on the front line and be exposed to risks. The control is carried out by radio, and data and command channels can be detected and suppressed. In addition, it is possible to hit the control panel as a source of radio signals. 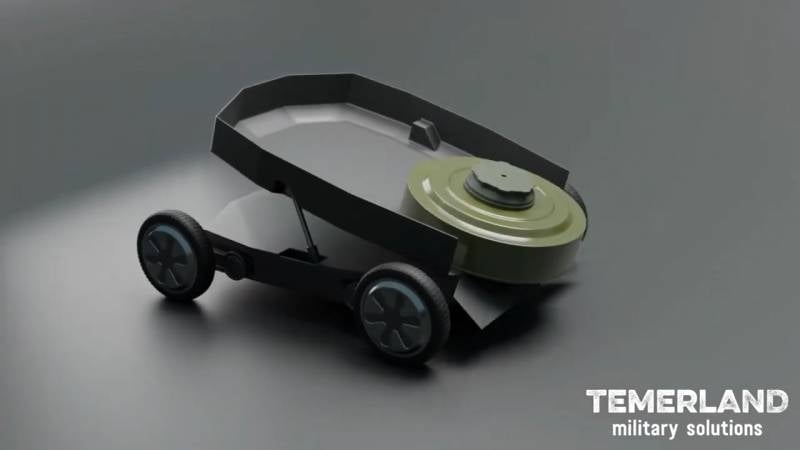 Mine drop
The TM-62 mine was used as a warhead on the Gnom Kamikaze platform. This is an old product, and its combat qualities are no longer sufficient. Various samples of modern armored vehicles are designed to detonate 8-kg charges under the chassis and / or under the bottom. Accordingly, the Ukrainian "Dwarf" can only damage them, but even the withdrawal from the battle is not guaranteed.

Finally, the economic aspects of the project are questionable. For all its simplicity, the robotic platform is disposable. In addition, it has a certain value, which can also grow due to objective reasons and the corruption factor. A reusable minelayer on the same platform is more successful in this regard, however, it is not without drawbacks.

Thus, a small Ukrainian organization is trying to revive not the most successful concept and create another self-propelled mine. It is alleged that Gnom Kamikaze products are already being manufactured and transferred to Ukrainian formations. This means that the latter will soon be able to test them in a real environment - and understand from their own experience why all other projects of this kind have failed.

However, now all the shortcomings of the Gnome-kamikaze are the problem of the operators. At the same time, the Ukrainian army is already facing a lot of threats, and the shortcomings of a self-propelled mine will not be its main problem. And the manufacturing company has probably already received payment - and can again engage in dubious projects.