Obama wins second round of debate 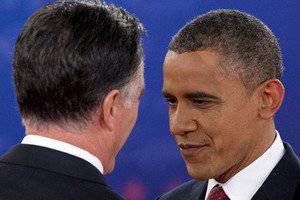 In the United States, a second round of debate took place between the candidates for the presidency. Barack Obama has again come face to face with his political rival.
The previous round of candidate debates ended with an impressive victory for Republican Mitt Romney, whose rating immediately surpassed the rating of the current American president. On the eve of the second round of debates, many evil tongues said that Mitt Romney would completely overthrow the Democrats during the second round and place political crosses to the grave (of course, also political). However, today it became clear that no final victory of the candidate Romney took place, since Obama decided to go on the offensive, and this time during the debate was more convincing than in the previous round.
The White House’s current host team took into account all of their punctures at the previous stage of the presidential race, and decided to prepare a truly impressive performance for Obama. This allowed Obama to turn from a mummy into an energetic politician who is able not only to talk about the possible failures of his opponent, but also to declare his vision of solving some pressing problems.
As you know, the presidential election in the United States is scheduled for November 6. Today, opinion polls show that Romney and Obama go almost nostrils to nostrils. At the same time, after the second round of debate, it turned out that Obama could get about 46% of voters, and his main opponent - about 43%.
As you can see, the percentages are within the statistical error, which means even greater tightening of the election race. Today, in order to achieve victory, candidates are trying to use all the means at their disposal. It may even happen that a victory during a debate will play a cruel joke with Barack Obama, who will again believe in his victory even before the start of voting. To prevent this from happening, the coaching staff of the current president is working out a strategy for the last pre-election stage. It is this stage that will last about 2 weeks will be decisive in the presidential race.
Today, Obama’s and Romney’s chances for bookmakers are about equal. None of their candidates in the race is considered a favorite, which means that the presidential election campaign in the United States can be protracted.
Ctrl Enter
Noticed oshЫbku Highlight text and press. Ctrl + Enter
We are
Geopolitical mosaic: Mitt Romney decided to abolish the US Department of Education in the United States, and Berezovsky to establish a monarchy in Russia
Military Reviewin Yandex News
Military Reviewin Google News
11 comments
Information
Dear reader, to leave comments on the publication, you must to register.