Into deep space on a Z-engine 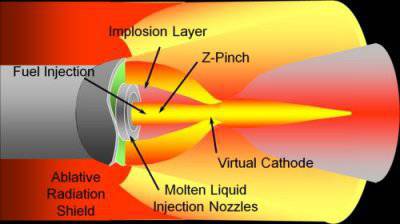 Half a century ago, even before the beginning of the space age, scientists from leading countries concluded that there are no serious prospects for existing types of rocket engines. The specific power of liquid and solid fuel engines is sufficient for the existing purposes, but too small for a distant future. The way out of the current "deadlock" became nuclear rocket engines (YARD). However, despite a lot of research, both concepts of such engines have not reached practical application. It all ended in a few tests.

Some time ago appeared news on the resumption of work in this direction, both in Russia and in the United States. In the United States, scientists from the University of Alabama, NASA, Boeing, and the Oak Ridge laboratory are simultaneously engaged in this program. The new rocket engine is planned to do so-called. impulse system. This means that during operation, small portions of the radioactive substance will be ejected from a special nozzle. After ejection, a portion of uranium, plutonium or other material with suitable properties explodes and gives the spacecraft an impetus, striking a special plate surrounding the ejecting nozzle. Since an enormous amount of energy is released during a nuclear explosion, pulsed NRE is currently considered the most promising class in terms of specific power and the ratio of fuel consumption to thrust. However, such a system has several characteristic flaws: the need to ensure proper strength of the plate, which takes up the impulse of an explosion, the release of radioactive fission products, as well as the correct calculation of the power of the nuclear charge and the time of its explosion. In this regard, all work on pulsed NRE has so far limited itself solely to theoretical calculations.

A new proposal from the Oak-Ridge laboratory staff is able to solve at least one problem of nuclear rocket engines - ensuring the correct distance from undermining the charge and, as a result, effective fuel consumption. The proposed technology is called Z-pinch (Z-compression). Its essence lies in the creation of a plasma "cocoon", within which there will be an explosion of fuel. To this end, it is proposed to equip the "nozzle" of the engine with a plasma generation system, as well as a number of related equipment. Thanks to him, immediately after the release of a nuclear or thermonuclear charge of an engine system, an especially high-power electric discharge is passed through the resulting plasma. The discharge causes the formation of a powerful magnetic field that captures the charge of fuel. The latter, having come under such an impact, shrinks and reaches a critical density. By the end of the electricity supply, according to calculations, an explosion occurs. The fuel for the Z-engine is currently proposed to use a mixture of deuterium and lithium isotope Li6. Thus, the proposed engine is based on thermonuclear reactions.

It is worth noting that the above description applies only to one cycle of operation of the perspective ZD compression YARD. During the operation of the engine such cycles must be repeated continuously, the frequency depends on the required power. The current calculations show that the maximum speed of a spacecraft with a Z-engine can reach the mark of one hundred thousand kilometers per hour and even pass through it. True, this will require a sufficiently large amount of deuterium-lithium fuel. In defense of the project, it is worth arguing that fuel costs less in terms of weight: traditional chemical rocket engines capable of accelerating the vehicle to such speeds would be completely unacceptable in size and fuel consumption. The Z-compression engine does not have such problems, but, as it always happens, it was not without its own flaws. First of all, it is the complexity of the design. At first glance, it seems that such a YARD is relatively simple, but even creating a slab that takes in the blows of explosions is in itself a rather difficult task, because this part will have to withstand hundreds and thousands of explosions of sufficiently high power. In addition, Z-compression requires a tremendous amount of energy that a spacecraft must also take from somewhere. Thus, saving on direct fuel leads to difficulties with other elements of the system.

Nevertheless, several American scientific organizations at once took up this project and, it seems, are not going to abandon it. As a minimum, until a maximum of information is gathered, from which it will be possible to derive the appearance of a promising engine and a list of its advantages and disadvantages of a technological nature. Naturally, new technologies require new and unique scientific equipment. The Z-machine installation was chosen as the main platform for Z-compression research. In fact, it was in honor of this device that the principle underlying the promising concept of a nuclear engine was named. The pulsed energy accelerator called “Z-machine” is located on the territory of the Sandia National Laboratory (New Mexico). In fact, it is a complex of a large number of powerful capacitors that can store energy and give it away on command. Such devices have long existed and are used by scientists, but in the project of the Z-engine the accelerator from Sandia will be used. The reason for this is its power. To hold and compress portions of thermonuclear fuel, colossal energies are required, which are simply beyond the power of other accelerators. The Z-machine is capable of delivering an electrical impulse of 210 terawatts for one nanosecond (billionth of a second). It is expected that Z-compression can be achieved at lower capacities, but the stock does not hurt.

The Z-machine power accelerator, even apart from the project of the new YARD, is of great interest. At the moment it is the most powerful device of this class. In addition, the unit from Sandia's laboratory has acceptable characteristics: the charging of system capacitors lasts several hours and does not use the existing “common” transmission networks. In this case, the Z-machine generates a record power of ultrashort pulses. The purpose of creating a pulse accelerator was to study the process of thermonuclear fusion and, in the future, to study the possibilities of controlling it. It is for this reason that the authors of the installation project provided for the possibility of accumulating huge charges. It is noteworthy that during the discharge of capacitors, lightnings are formed around the conductors of the accelerator.

The project of a nuclear rocket engine operating on the principle of Z-compression is quite interesting, but at the same time fantastic. To date, mankind has not yet conducted any experiments with pulsed NRE, especially with those based on thermonuclear reaction. However, the finished engine is still far away. So far, scientists face the challenge of carefully studying the characteristics of thermonuclear reactions in a small amount of matter, as well as proving the practical possibility of Z-compression. In addition, you will need to create an energy source that will cope with the generation of the necessary electric power for the engine, as well as design a workable and highly protected system for supplying thermonuclear fuel to the working part of the engine. At the moment, all these tasks look more than difficult. Hopefully, the Americans will cope with them and humanity will receive a new technology that can give a powerful impetus to astronautics and ensure massive flights to other planets.