October 18 2012
86
Mysterious at first glance discrepancies are connected with Rokossovsky's birthplace. In Soviet historiography, Rokossovsky’s birthplace indicates the city of Velikie Luki and the source of this information is his official autobiography.

The meticulous researchers of his biography, however, say that Konstantin Konstantinovich was born yet in Warsaw. This is evidenced by a candidate card filled by the 22 of April 1920 of the year for the position of commander of the cavalry regiment. An indirect circumstance confirming this version is the fact that Rokossovsky's father was a railroad worker and could not live with his family in Velikie Luki, the railway through which was allowed only two years after the birth of Konstantin Rokossovsky.

Where did the version with the Great Bows come from? Some historians associate this moment with pure ideology. The fact is that in 1945, Marshal Rokossovsky is honored with the second star of the Hero of the Soviet Union, and the status of Hero assumes the obligatory installation of his bronze bust in his hometown. Here difficulties arose: it was inconvenient to put a bust to Rokossovsky in Warsaw (in a state not officially belonging to the Soviet Union). So there were the Great Luke. 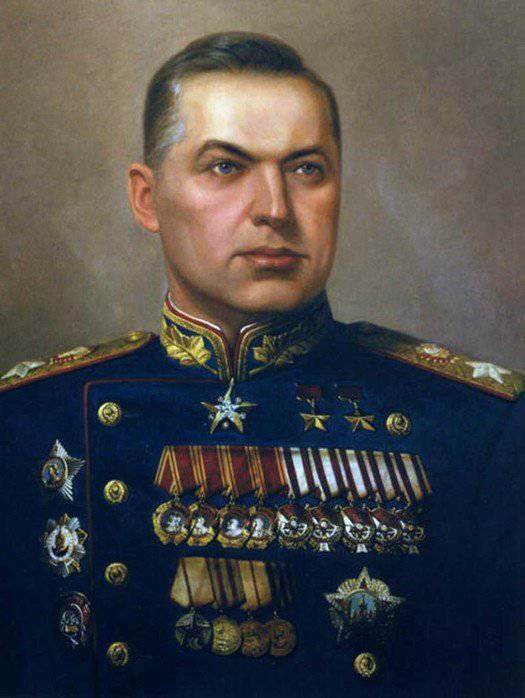 Childhood Constantine can not be called cloudless. Having lost his father early, and soon his mother too, he, having not studied properly, was forced to work as a laborer for 15 years.

Since the beginning of the First World War, Rokossovsky volunteered to the 5 th Kargopol Dragoon regiment of the 5 th cavalry division of the 12 th army. Already at such a young age, he manifests himself to be a rather brave fighter and in fights near the city of Ponevezhim he heroically attacks the German art battery, for which the command introduces 3 degree to the St. George's Cross (Rokossovsky never received this award). Later, for taking the German guard's trench, Konstantin Konstantinovich is awarded the St. George Medal of the 4 degree. In 1916, for numerous partisan raids in the area of ​​the Western Dvina (where the Kargopol regiment was then strengthened), Rokossovsky received the St. George Medal of the 3 degree.

In the spring of 1917, Konstantin Rokossovsky was promoted to junior non-commissioned officer, and in December of the same year he joined the Red Guard and later the Red Army. Consisting of the Red Guard (Krasnopolsky Red Guard Cavalry Detachment), Rokossovsky helped suppress a number of counter-revolutionary uprisings in the Vologda region, in southern Russia (including Ukraine), and since July 1918, he has been fighting with the White Guards and the revolted Czechoslovakians in the Urals. In the same place, in the Urals, the squadron receives the name of the 1-th Ural name Volodarsky cavalry regiment, and Rokossovsky becomes the commander of the 1-th squadron of this regiment. For fights against Kolchak, Rokossovsky was twice awarded the first award of the young Soviet Republic - the Order of the Red Banner.

Rokossovsky joins the Bolshevik Party only in 1919 year.

Already in peacetime after the Civil War, Rokossovsky graduated from the Higher Cavalry Command Courses (G. K. Zhukov and A. I. Eremenko, future heroes of the Great Patriotic War and marshals of the Soviet Union, also attend lectures at the same time). Rokossovsky continued his studies in the 1929 year, having completed a refresher course for top management at the Academy. M. V. Frunze.

At the same time, Konstantin Konstantinovich served in the area of ​​the Chinese Eastern Railway, where a very unrestful atmosphere reigned then, and clashes with Chinese troops occasionally occurred.

From February 1932, Rokossovsky was transferred to the post of Commander-Commissioner of the 15-th Separate Kuban Cavalry Division (Dauria). In the 1935 year during the innovations in the Soviet army, Konstantin Rokossovsky received the personal title of division commander.

The dark clouds of repression of 1937 against the Soviet military command did not pass by Rokossovsky: in August of 1937, on a false denunciation, he was accused of having links with Japanese and Polish intelligence services. For three years Rokossovsky was under investigation, being in the inner prison of the NKVD in the Leningrad region (in the prison of the famous “Big House”). Unlike some other Soviet soldiers, Rokossovsky did not begin to stipulate himself and 22 March 1940 was released due to the termination of the case, rehabilitated. Konstantin Konstantinovich is reinstated in civil rights, in the Red Army and party posts. Soon (with the introduction of generals' posts in the Red Army) he was given the rank of major general.

After a period of health recovery, in November 1940, Rokossovsky was appointed commander of the 9 Mechanized Corps as part of the Kiev Military District, commanded by Zhukov. At the head of the corps, Rokossovsky was a little more than half a year, sufficient time for Zhukov to take a closer look at Konstantin Konstantinovich and make the following entry in his diary memoirs: “It’s difficult to name a more thorough, hard-working, hardworking and by and large gifted person”.

At the head of the same building, Rokossovsky was fatal for Russia 22 June 1941 of the year. Already 24 June Rokossovsky corps took the first battles on the Lutsk direction and in the military stories these days remained as memorable as the days of one of the largest tank battles. Lacking practically the most modern T-34 and KV vehicles at that time, covered with weak artillery support, Soviet tankers, nevertheless, in some areas heroically defended themselves from the superior and advancing forces of the German enemy (units of the 20th Panzer Division of the 9th first mechanized corps). Despite the fact that in these first days of the war, the days when our troops were forced to retreat under powerful German pressure, awards were given very sparingly (not to reward for retreat?), Many fighters and commanders of the 9th mechanized corps received military awards, and Rokossvsky himself is the fourth order of the Red Banner.

Wonderful leadership experience Konstantin Rokossovsky acquired in the battles for the defense of Moscow. Despite the fact that the troops of Rokossovsky's 16 Army first got into the Vyazemsky Cauldron, they nevertheless managed to get out of the encirclement and stood on the Volokolamsk direction, obeying strict orders “from above” - “Not one step back!”. Moscow at that tragic moment of the war really was in the balance of surrender and death, however, there is such a case related to this time: having received the Red Star correspondent, Rokossovsky wrote on his map truly prophetic words: “When fighting near Moscow, think of Berlin. Soviet troops will definitely be in Berlin. ”

During the battle of Moscow, Konstantin Rokossovsky was presented for awarding the Order of Lenin.

In March, 1942, Rokossovsky was seriously injured enough, - a fragment of a projectile touched the spine, lungs and liver. After healing, for two years (from 1942 to 1944 of the year), he takes command of the Bryansk, Don, Central, Belarusian fronts.

During the Battle of Stalingrad, the troops of the Don Front during the planned counter-offensive by Rokossov, together with the armies of the South-Western and Stalingrad fronts, broke through the defenses and managed to surround the group of General F. Paulus (consisting of 330 thousands). The entourage of Field Marshal Paulus’s army ended with a grandiose captivity (besides Field Marshal) of 24 generals, 2500 of German officers, 90 of thousands of ordinary soldiers. For this truly large-scale victory over the German troops, Rokossovsky receives the newly established Order of A. V. Suvorov.

Even more remarkable commanding abilities Konstantin Rokossovsky showed in the battle of Kursk during the repulse of the attack of the German troops and the defeat of the enemy Oryol grouping during the counteroffensive (after which he was successively awarded the rank of colonel-general and army general). The talent of the organizer of successful, and sometimes masterly original, performed by military special operations was later only confirmed in the actions of Konstantin Konstantinovich during Operation Bagration, in the East Prussian and East Pomeranian and Berlin operations. Therefore, it is not at all surprising that even before the end of the hostilities in Belarus Rokossovsky was given the Marshal's title, and I. F. Stalin in private conversations called Rokossovsky just as Bagration.

After the end of World War II, Rokossovsky was commander-in-chief of the Northern Group of Forces. Since 1949, Konstantin Rokossovsky, by personal appointment, JV Stalin becomes Minister of National Defense of Poland. In addition, Rokossovsky is a member of the Central Committee of the Polish Workers' Party and acts as deputy chairman of the Council of Ministers. From Poland, Konstantin Rokossovsky was recalled only after the death of Stalin.
In 1957, Rokossovsky was removed from all key posts and transferred to the post of commander of the Transcaucasian Military District. Nevertheless, a year later, Rokossovsky again returned to the post of deputy defense of the USSR and chief inspector. Konstantin Konstantinovich spent the last years of his life as an inspector general of the Ministry of Defense, investigating the delivery of unfinished naval ships.

Rokossovsky also worked in journalism, wrote articles in the Military Historical Journal, and one day before his death, he handed over a book of memoirs, Soldier's Duty, to print.

Practically all contemporaries of Konstantin Rokossovsky, noting the high level of his commanding talent, spoke about the high moral level of this person (which is characteristic, Rokossovsky’s personality assessments did not change depending on the “general line” of the party and the Soviet leadership, unlike some others). Zhukov for example).

In military history, Konstantin Rokossovsky will forever remain a talented commander: remarkable operations to defeat and liquidate the vast army of Paulus, the defense organized by him near Kursk, brilliant military operations in the Belorussian direction - thanks to this Rokossovsky became not only a hero of the Great Patriotic War, but also glorified the Russian weapon for the whole world.