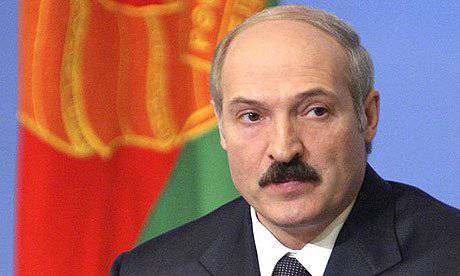 Neighboring countries of the European Union with Belarus create problems for the official Minsk. This was announced on October 16 by Alexander Lukashenko at a press conference in Minsk, responding to questions from representatives of the Russian regional media, a REGNUM correspondent reports.

According to Lukashenko, revanchist sentiments are still alive in Poland, and evidence of this is the maps where Polish lands stretch all the way to the capital of the current Republic of Belarus. Earlier, Belarusian lands were part of various states, but today there are forces in the European Union, which view Belarusian territory as their possessions.

“Western Belorussia. By the way, the Poles today also have maps, where their territory is to Minsk. We know this and tell them directly,” Lukashenko cited the example. “Once we were in the Grand Duchy of Lithuania,” he recalled, “and Lithuania is already shuffling there. The 30% of the budget forms in the country due to transshipment of our goods — millions of tons. If we leave there, the country will collapse!” we are taught to live! That Swedish plane is thrown with these teddy bears, then something else. What do you teach us to live? This is the same thing that we would teach you - Russians - to live! Do not teach us - we have our traditions " .

Recall that Lukashenka is not the first to raise the topic of Polish territorial claims against Belarus. Commenting on the outcome of the 29-30 September 2011 of the Eastern Partnership Summit in Warsaw, Lukashenka said that Poland couldn’t see Western Belorussia as part of its own ears. Describing the background of tension in relations between Warsaw and Minsk, Lukashenka then said: “Well, the Poles are committing themselves! You understand, here they are indulging themselves! This is not a secret for you: here we must pass the western border near Minsk. Not less, not more. And Here are figures of the Sikorsky type (Polish Foreign Minister Radoslaw Sikorsky, - REGNUM press comment) - he has “eastern kresy" in front of his eyes. Well, I want to say this: with their attempts, not by hook or by crook, we chop off some of our Western Byelorussia, so long as I am alive and I exist here as president tons of the country - they don’t see it as their own ears. Our country is united, integral and indivisible. And pushing us through the fifth column, through our separate “pravadyrou" here (leaders, leaders - REGNUM comment) will not work. and they introduced the “map of the Pole", which they only do! But our Poles want to live in Belarus. If they wanted to live in Poland, they would have moved there a long time ago. They live here normally, and they will live - these are our citizens, these are our Poles, their order of 300 thousands. We treat them (and I personally) as Belarusians. Therefore, here they wedges fail to drive. Well, and began to break. "

“So I was informed that the Germans also took an incomprehensible position. You see, it hurts me the most: what is it that they want to do? What do they want it to do? The Poles and they make such demands on certain lands. Let's say frankly: the Germans owe us there is still so much time for the current German politicians to pay for what happened in the past century? ”, said the head of Belarus, assessing the background of the events at last year’s Eastern Partnership summit.

As REGNUM news agency reported, 4 on July, Swedish pilots from the PR company Studio Total, raised a light-engined plane from Lithuanian territory, crossed the state border and dropped hundreds of plush toys to the outskirts of Minsk, to which leaflets with slogans in defense of human rights were attached. According to the organizers of the action, the plane, unnoticed by the Belarusian Air Force-Air Defense system, returned to Lithuania without hindrance. Until the end of July, the authorities of Belarus denied the fact of the flight, but opened a criminal case with the phrase "aiding the illegal crossing of the border." At the end of July, Alexander Lukashenko, at a meeting with the participation of military leaders, acknowledged the fact of illegal flight across the state border of Swedish pilots, the heads of the State Border Committee and the troops of the Air Force and Air Defense of the Ministry of Defense of Belarus lost their positions. Official Minsk turned to Lithuania for legal assistance in investigating the incident. Sweden refused to assist Belarus in investigating the "plush landing".