See the forest for the trees. About waving a saber, black and white thinking and the goals of victory 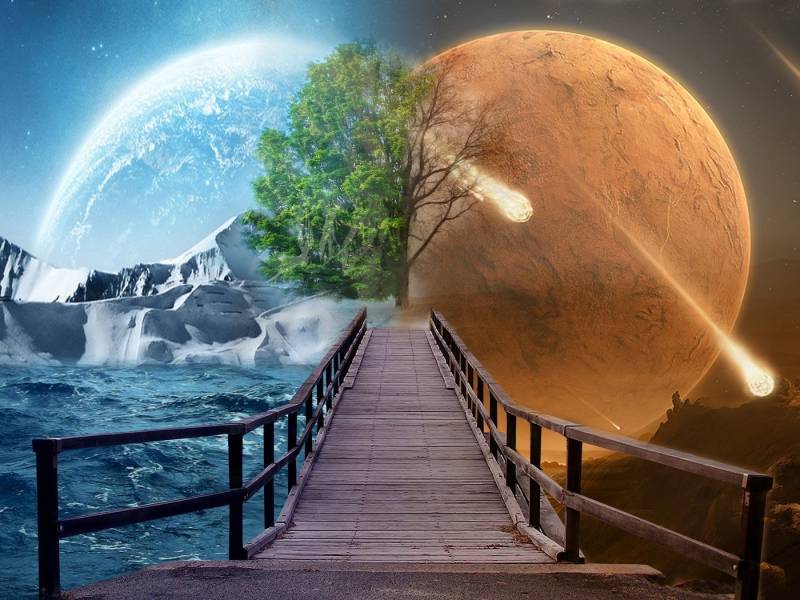 I thought that the topic raised in the previous article (On mobilization, delegation issues and the naval parade), will be exhausted in the same place, but it turned out to be inexhaustible. That's why I had to continue.

About swinging a saber

In the excellent Soviet film "Officers" there is a wonderful phrase: "Think! The commander must think, you understand? And not just waving a saber! It can be added that not only the commander is obliged to think. Perhaps this is a universal duty.

Somehow life confronted me with one head of production. The man was full of energy. You read his reports - dedication is beyond anyone. So, on his day off, he rushed to another city in his personal car: the equipment stopped - it was urgent to bring the block that had failed, and he brought it. Here's another force majeure: it doesn't matter - they brought the brigade out into the night, and everything was done. In general, not an employee, but just a treasure.

But, reading his reports, the following questions arose: why did force majeure repeat itself with enviable regularity - two or even three times a week? In this connection, production constantly operates in the "feat" mode? Why is it not working stably and systematically? ..

Why does a person begin to “wave a saber”? Often from a lack of professionalism. This, thank God, is fixable - with the accumulation of experience passes. But often, and because of the narrow mind - this, alas, is not treated.

However, there are other reasons for "sword waving".

One reason is panic.

From a biological point of view, man is an animal. Millions of years of primitive life genetically laid the response to stress - "hit" and "run".

SWO is stress. Even if you don't realize it. And there are characteristic demands “immediate mobilization”, “urgently everything on a war footing”, that very “saber wave” right and left, without disassembling one’s own or others.

Characteristically, the key requirement is “immediately” and “urgently”, otherwise “everything is lost”.

Such a reaction is absolutely normal for any person. This is the result of millions of years of evolution. It is bad when such a reaction becomes uncontrollable. It is even worse when it begins to influence the adoption of state or socially significant decisions.

Reiterating the questions raised earlier: what is meant by economic mobilization, what are its goals, what results should be achieved?

An interesting chronology of the creation of the F-22 aircraft.

Total - 24 years. This is in the "great and mighty" United States.

What is the price of urgency?

A sea of ​​references to the experience of the USSR during the Great Patriotic War. This is truly a unique experience. So what is he talking about?

I will quote a number of documents.

“During the evacuation of enterprises, the selection of equipment for installation is carried out largely by chance, without taking into account the completeness of certain types of equipment, and especially production and energy equipment.
Having dismantled the equipment, the people's commissariats did not organize accounting of this equipment and control over its progress along the way, as a result of which trains with evacuated equipment arrive at their destination, as a rule, very late, in parts and incompletely.
- Memorandum of the Secretary of the Nizhny Tagil City Committee to the State Defense Committee dated November 14, 1941:

“The plant received 15 conflicting instructions that paralyze the normal operation of the plant. The plan for shells increased and decreased several times, which did not give the plant the opportunity to improve technology and raise labor productivity. The mass production of projectiles requires a huge amount of work to re-equip and re-equip the machines, arrange them along the flow in accordance with the technological process, as well as the time required for machine operators to master each new type of product. Since the product range was not determined as a result of the conflicting instructions of the NKB, the machine equipment was rearranged several times from place to place, which means it was idle.
The haste and confusion that arose at that time is to some extent justified by the difficult situation on the fronts and the eccentricity of the tasks, but this does not reduce its negative consequences.

The experience of the Great Patriotic War in transferring civilian enterprises to the production of military products is also significant.

So, without imploring the importance of civilian enterprises converted to the production of military products, their share in the total volume of this production amounted to about 18%. The overwhelming volume of production (82%) was accounted for by specialized enterprises of the military-industrial complex (N.S. Simonov “The Military Industrial Complex of the USSR in the 1920s–1950s”).

At the same time, as noted in a memorandum by the deputy head of the USSR Narkomfin Ya. Golyaev dated October 8, 1943: “the cost of military products at the enterprises of civilian people's commissariats is extremely high" (ibid.)

In today's world of sophisticated technology, the difference will be even more noticeable. I will also refer to the existing Soviet plans of the 80s for the mobilization preparation of industrial enterprises. They were made up of stupid people.

For example, the essence of the mobilization plan of one purely civilian Soviet plant was as follows - all available stocks of refrigerants used in production (as dual-use raw materials) were transferred to the corresponding specialized enterprises of the military-industrial complex. On this, his participation in the production of military products ended.

I will again mention the head of production, with whom this material began.

Why with all the chronic emergency work - he was known as a cool anti-crisis manager? After all, the source of the crises was the lack of his own professionalism. It would seem a paradox. Unfortunately no.

We are faced with the age-old struggle between efficiency and effectiveness. Alas, often the society itself forms a request for spectacular actions, instead of boring, systematic, imperceptible at first glance, but often more productive work.

As a result of the actions of the enemy DRG, explosions occurred in ammunition depots. Why are the guilty not punished? There are many such comments.

OK. Found the culprit - punished. What's next? Need a spectacular public execution with beheading? Or do you need a solution to a problem?

If a solution to a problem is needed, then ask questions about solving the problem, not about assigning blame. And be prepared that official responses may be limited to the standard "all necessary measures have been taken." No sane person will tell you where security systems or air defenses are installed.

But if the society will concentrate on the search for the perpetrators. On the demand for dashing cavalry attacks. On a spectacular and beautiful "saber waving", which will be perceived with more approval than an inconspicuous real work ...

The state apparatus is by no means a thing in itself. One way or another, he is a part of our society, and he still responds to the demands of society. Sometimes very badly and reluctantly. Sometimes it's not so right. Sometimes very sluggish and slow. But he reacts. Especially if the society acts persistently enough.

So, therefore, it is very important that the society forms the right requests.

About black and white thinking and the goals of victory

Just the other day, a comment was made on one of the information channels. I will quote almost in full:

“In the Kursk region, Ukrainian saboteurs blew up several power transmission towers ... In connection with which I have a completely reasonable question. Why are we still not attacking Ukrainian power plants and allowing Ukrainian industry to use electricity? Where is the red line after which you can move on to attacks on infrastructure? Indeed, in fact, it is quite simple to drive the industry of Ukraine into the XNUMXth century, it is enough to cut off the current.”
That's an example. Similar statements come up all the time. The emotion is more than understandable. Moreover, I completely share this emotional impulse.

However, these actions are of great informational and psychological significance.
Their main task is to evoke just such an emotional reaction, an example of which is given above.

Many different materials have been published on the topic of the formation of the project “Ukraine as anti-Russia”. The project, it must be admitted, was implemented brilliantly. Otherwise, we would not have a military confrontation now. And our task is to nullify the negative consequences of this project.

Technically, "cutting down the current" is quite simple. What are the consequences? These are non-functioning water supply and sewerage systems, food problems, medical assistance not provided to the population - what is called a humanitarian catastrophe. Moreover, the humanitarian aspect is not the most important here, although from an ethical point of view it dominates.

There is still a purely pragmatic question. Will destroyed life support infrastructure and Kyiv brought to its knees contribute to solving the problem of “Ukraine as anti-Russia”?

You can drive Ukraine into the 1933th century, but what will be the result? The Weimar Republic of XNUMX?

It is for this result that the actions to undermine power lines and shell civilian objects are calculated. Their key task is to create an “anti-Ukraine” from Russia and push these mutual anti-formations into a state of ongoing blood feud..

In terms of pitting peoples against each other, Anglo-Saxon politics has a rich historical an experience. And here, our army and society are faced with a really difficult task - to wage war without falling into "anti-Ukrainianism."

In addition, it must be taken into account that the current military conflict is only part of the global geopolitical confrontation, conventionally called "Russia - NATO" (in fact, it is more and more ambiguous).

In fact, there is a classic struggle for resources and a place under the sun (and I sincerely feel sorry for the Ukrainians, who allowed them to turn into expendable material in this confrontation).

Accordingly, the goals and victories in this conflict will not be the capture of Kyiv or Lvov (although it may make sense), but the achievement of a certain balance of interests between key centers, in which Russia, or rather, Russian civilization and its constituent peoples, will be assigned a place that provides at least a safe and as a maximum a comfortable and comfortable life.

Only in this context can one correctly define the goals and objectives of the military operation in Ukraine.

And the task of Russia is to achieve the most convenient and stable position for itself in future negotiations on the structure of this world.

For this, two conditions must be met:

- for starters, so that the costs of continuing the conflict for the conditional “NATO” exceed the possible benefits from its continuation;

- and at the same time not exhaust your own resources to the point where the conflict goes into a stalemate.

Based on this, the transfer of the entire country and economy to a military footing is an extreme measure. And now the production of baby undershirts is no less important than the production of drones. This provides stability.

On this basis, following the results of a military operation, it is desirable to have at least a non-hostile population of Ukraine. Revenge is too expensive, especially if it is not selective.

Therefore, it is necessary to make a right choice between effectiveness and efficiency.
It's not just about winning the battle. It is important not to lose the war.

Good luck to all of us in this difficult task.