October 17 2012
5
The first archival confirmation of the construction of submarines in Russia dates back to 1718, when the carpenter Nikonov Yefim, a native of the Pokrovskoye village near Moscow, gave Peter I a plea with the proposal:
"... for the military occasion, he will make an acceptable vessel for the enemies, who, in quiet time, will break ships at least ten, or twenty at sea. For a sample, that ship will make a sample, how many guns will it have, under the loss of his stomach, if will not please. "

Nikonov in January 1720 showed in his fairy tale: "A ship can do this and it will be hidden in the water and come under the warship (you can act with instruments in calm weather and you can deploy and saw everything) commanded to make nowadays a model in moderation, which would pododit a ship at sea, but for the testimony of testing in the river. " 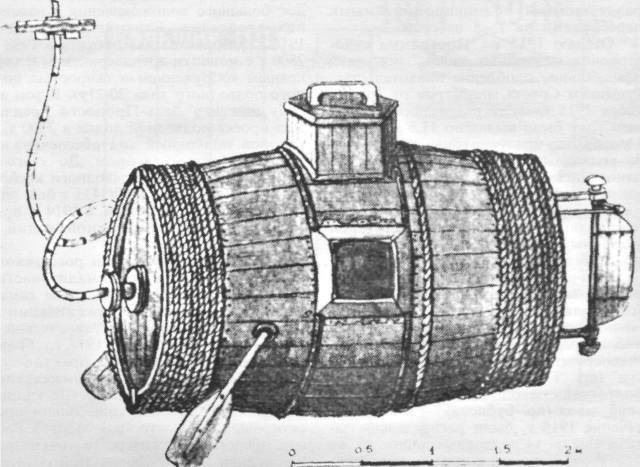 Estimated view of the ship-model (reconstruction)

Peter I (probably during his trip to England, he learned something about the work of Van Drebel, who built a submarine for 1620 passengers and 8 rowers in 12 year), became interested in Nikonov’s proposal, giving him the opportunity to create a model in the Galerny yard - " exemplary vessel. " Nikonov was given the title of "the secret vessel of the master model" and was assigned a salary of 40 rubles per year. In 1720, work began on the model, which ended in 1721. The model was tested in the presence of Peter I. After the tests, Nikonov was ordered to start building a "hidden fire vessel of a large hull."

In the autumn of 1724, in the presence of Peter I, the ship was tested at the Galerny yard. However, when the vessel was launched into the water, the bottom was damaged, after which it did not act and was pulled ashore. Despite this, the 18 of December 1724, the Admiralty Board, decided to complete the construction of the vessel, highlighting everything needed for this. According to this decision, at the end of the work, Nikonov was to submit a report to the College. In 1725, the ship’s repeated tests were carried out without a king. However, all three launches were unsuccessful because the “secret vessel” did not work due to damage and leakage. Catherine I in September 1725 of the year, having received a report from the Admiralty firm, ordered "without any delay" to make a new vessel. The last tests were carried out in 1727 year. The decision of the Admiralty-College Nikonov in 1728 year was demoted to the admiralty workers and exiled to Astrakhan, because in ten years not only could not make the ship, according to the presented model, but also "by the tests this was not very valid." Hidden "from someone else's eye" "Nikonov's" hidden ship "rotted in the barn.

With great uncertainty, since neither the drawings nor the descriptions for this vessel have survived, it can be assumed that the submarine Nikonov was barrel-shaped. The basis for such a conclusion could be the attraction of the assembly of barrels to the vessel’s vessel, as well as the requirement to issue “fifteen iron strips two inches wide and two quarters wide”, possibly for the manufacture of hoops that tightened the submarine’s wooden hull. The bow section had the architecture of a surface ship, the stern was equipped with a rudder. The cabin on the upper deck was equipped with hermetic sight glasses. The oars served as mover, the crew consisted of 4 people. For testing, 50 candles were released, which is equal to 10-12 hours of the vessel being under water.

The list of cases of the Ober-Sarvayerskoy office at the Admiralty-Collegiums in the archive is the case filed by 31.01.1720 No. 54, which refers to the construction of Efim Prokofiev native of the village of Pokrovsky “the secret ship of the model” and also the issue for the construction of forests, various supplies and materials. A selective list of materials, as well as their quantity, allows reconstructing the size of the vessel and restoring the operating principle of the immersion and ascent system. This list included: saw blades, pine, 3 length, planted (1 plantation - 2130 mm) - 60 pcs. (120 feet); beef lard for impregnation of boards - 2 pud (1 pud - 16 kg.); canvas - 40 arshin; lard for body pitch - 4 pud; bhot skin (made from seal skins) black - 3 pcs .; canvas - 20 arshin; copper pot; copper pipe - one; copper wire - 3 pound (1 pound - 440 g.); tin boards with 500 holes 1 foot width and 2 foot length - 10 pcs. Based on this, it can be assumed that the width (diameter) of the vessel was about 2,1-2,15 m, length - 6,0-6,4 m.

The dive / ascent system probably worked as follows. During the opening of the constipation of the receiving kingston, the outboard water flowed into the lower part of the tank, the main ballast. As it was filled with water, the air was forced out into the compartment through the vent pipes on the roof of the tank. The pressure in the compartment increased slightly, reducing the difference with outboard pressure. The small total area of ​​"hair" through holes in tin boards made it possible to fill evenly along the length at moderate speed. Reception Kingston when going submerged was closed. After removing the air bubbles from the tank, the ventilation pipes overlapped. The vessel, being in a suspended state under water, made evolutions when rowing with oars.

During the pumping of water with a drain pump, the weight of the boat decreased and it floated. The valves on the central ventilation pipe and the drain pipe during operation of the pump were open. Observation of the passage of the water's edge led through the windows in the wheelhouse.

To get out of the ship in order to damage the enemy ships, Nikonov proposed to equip the ship with diving suits: “To navigate ships, you need to make two leather jackets with pants for each person and two for each head on the upholstered or sheathed leather barrel. eye to make the windows by killing lead wells. In addition, sand or lead should be tied to the back for the load according to the proportion. And if this is done correctly, then you need to make special tools for the action of ignition and turning of the ships. "

In addition, it was assumed that the ship would be armed with "fiery" (incendiary) pipes, in connection with which it was necessary for Nikonov to "Send prometory to the Main Artillery and demand that the hidden vessel be given out ten tubes of copper filled with gunpowder and salitroyu smeared."