October 17 2012
3
NASAMS - medium-range air defense missile systems. The main purpose is to destroy enemy air objects at medium and low altitudes in any meteorological conditions. The development of the Norwegian company "Norwegian Kongsberg" and the American "Raytheon". It was created to replace the air defense system "Hawk", which is in service with the Norwegian Armed Forces.

Design starts in 1989. The development of the project is completed by 1993 year, in which they began to test the ground new ZRK SD. In 1994, NASAMS is adopted by the Norwegian Air Force. In order to reduce the cost, the creation of “NASAMS” resulted in a profound modernization of the existing in-service complex and systems. Applied the unification of anti-aircraft missiles - used missiles "AMRAAM", belonging to the class "air-to-air" (AIM-120A), developed by the American company "Hughes Aircraft". Subsequently, Raytheon joined the production of missiles. And in the 1997, Hughes Aircraft came with Raytheon. 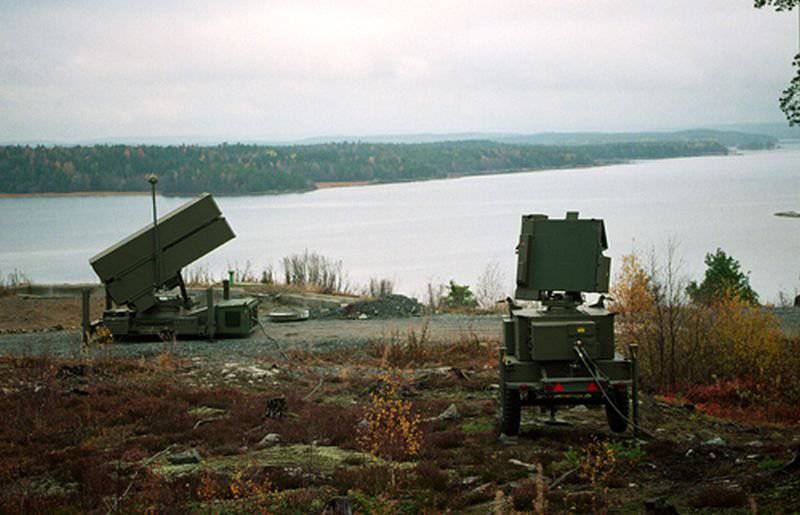 The enemy’s airborne objects are detected by the upgraded radar three-coordinate station AN / TPQ-36A, and the complex’s fire control is upgraded by the NOAH control system. This radar equipment and OMS were used on the “Hawk” SDMS, serially produced from the 1959 of the year.

NASAMS, designed as a replacement for the “Improved Hawk” air defense system, was designed to counter maneuvering aerodynamic targets at medium altitudes. Tests have shown the high efficiency of the new complex and the ability to counter cruise missiles. NASAMS becomes a medium radius air defense system. The combat capabilities of the Norwegian system surpassed the capabilities of the predecessor "Improved Hawk". Increased capabilities for tracking and hitting targets; reduced system response time and system preparation time for use; due to the use of new technologies, compactness and mobility, the number of personnel in the crew was reduced. Due to the high unification has the ability to interface with other equipment and systems.

The main unit is a platoon. One NASAMS platoon - 3 PUs carrying AMRAAM 18 missiles, one AN / TPQ-64 three-coordinate radar station, one PUU. Combat (tactical) unit - the battery. One battery - 3 platoon - 9 PU carrying 54 missiles, three radars, which are technically possible to combine into a single information network, where one radar can operate as all three radars, and three ISFs. On one of the SCP is located the battery KP. He receives the CO from a higher headquarters and transfers him to the rest of the SCP. Battery volley time with all ammunition is no more than 12 seconds. 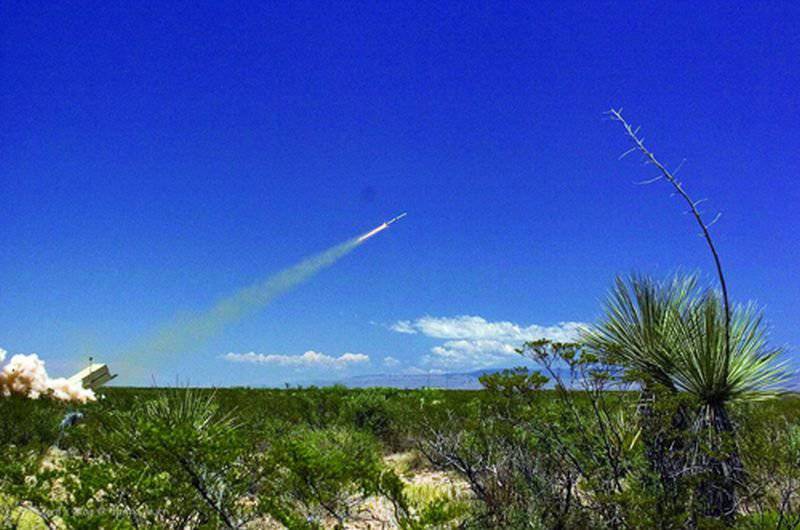 When a target maneuvers in the SCP, flight correction teams are sent to the rocket by the changing coordinates of the target. When there are no maneuvers for the target, the missile defense system goes offline using an inertial unit. Antenna receiving commands from the SSP on the SAM is made in the nozzle block. From the antenna, the signal is transmitted to the command line communication receiver. Homing radar captures a target at a distance of 20 kilometers. After capture, the rocket switches to active homing. At that time, a powerful computer was installed on board the rocket (clock frequency 30MHz).
Warhead - high-explosive fragmentation directional action. Fuse or contact, or active radar.

Launcher
The PU is made on the Scania P113 off-road chassis. Rockets are always in the TPK. They are placed in a package of 6 TPK. For loading rockets into the WPK, the complex includes a loading special vehicle. To produce a salvo, TPKs are raised by a fixed vertical angle of 30 degrees. When moving, the vertical angle of the WPC is equal to 0. 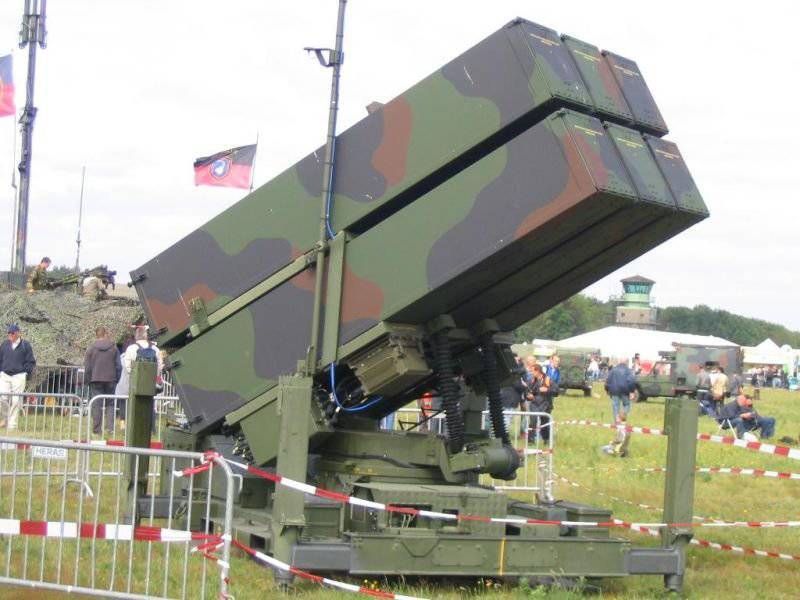 Radar "AN / TPQ-64"
AN / TPQ-64 is a multi-function radar. Created on the basis of the radar "AN / TPQ-36A". Opportunities - search, detection and identification of air objects up to 60 and guidance to specific targets before 3 SAM. Radar pulse-Doppler with a phased antenna and a built-in unit "Mk.XII" definition of belonging. Work Radar - circular rotation of the antenna with electronic scanning. Work management is carried out by a powerful computing unit of the SCP. The radar creates a needle-like pattern with a minimum level of side lobes, can compress pulses, select targets and select the desired signal and its power.

Multi-purpose console consists of two duplicated jobs. Each place is provided with 3 monitors, two of them show the air-combat situation, the third shows the readiness status of the whole complex.

NASAMS Vitality
To ensure the survivability of the entire complex, launchers can be dispersed from the ISF or radar at a distance of 25 kilometers. Communication between the elements of the complex can be maintained both via wired and wireless communication lines. To ensure communication, switching systems from Thales Communication, built on the TAS 300 switch, are used.

NASAMS and its modifications
For 2000, the cost of one NASAMS platoon was estimated at $ 14 million. SAM SD is used for air defense aviation bases in Norway.

NASAMS II - modification (upgrade) of the basic version of the air defense system SD. Adopted in 2007 year. The composition of the 1 battery - 12 PU with 72 missiles, 8 radar, 1 PUU and 1 tactical control machines. Launchers installed on the new chassis "Bv 206". The complex receives improved software, is compatible with the used communication systems. 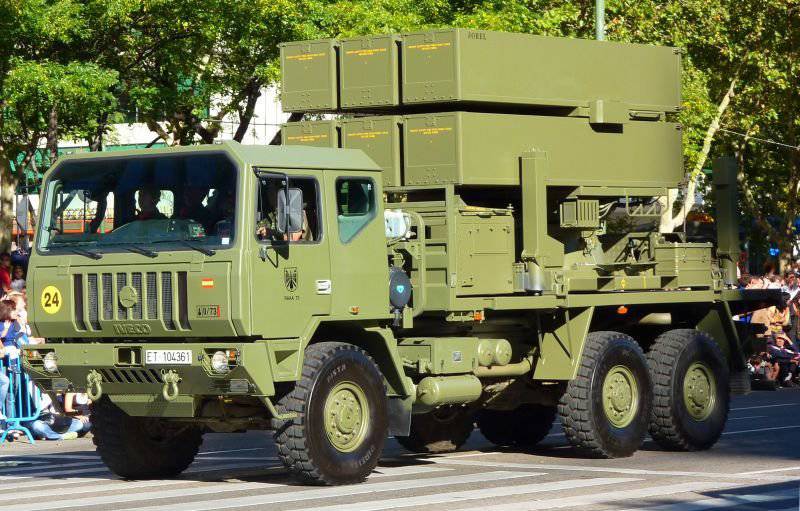 HUMRAAM is the American counterpart for the SV of the United States. 559 project. To improve combat effectiveness and increase the mobility of missiles, TPCs with missiles were installed on lightweight chassis with increased maneuverability. The first tests took place in 1997.

SLAMRAAM - American version for the needs of the Marine Corps. Developed by Raytheon. The start of development in 1990 is the CLAWS program. In 2001, the MP concludes a contract for the full development of the complex. In 2000, SLAMRAAM CDs were developed, modified, closed, etc. MP canceled the order, but development continued for the US DoD. The complex receives an updated AIM-120C7 rocket. The project is closed in 2011 year, with the possibility of co-financing the development of 2012-2013. The complexes will be used for emergency measures in a certain amount. It was expected that the first deliveries will take place in 2012 year. PU are made on the chassis of the machines "HMMWV", used radar "Sentinel".

SLAMRAAM EX is the latest development of the complex by Raytheon. Of the features - increased range of destruction and the use of two types of missiles for short-range and medium-range, respectively.