A new stage of SVO. "All Russian enemies" in action 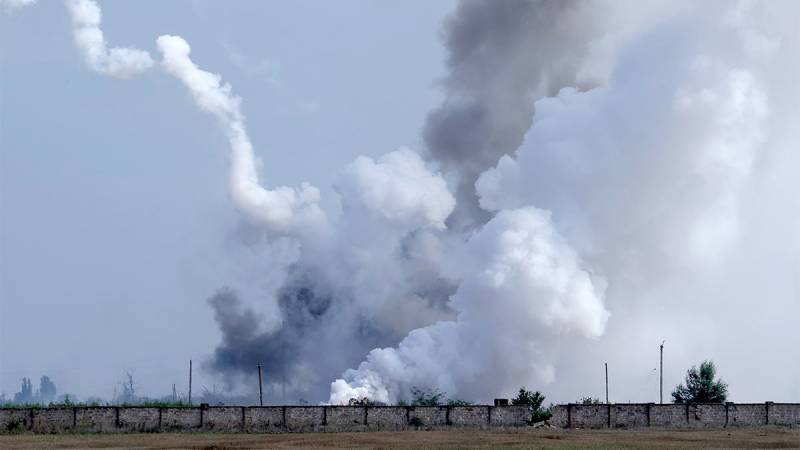 Today in Telegram I saw a note by Igor Ortsev about sabotage in Crimea. I even published a repost of the FRONTovye Notes channel at my place. This is not even a note, this is a cry of the soul. Resentment. The desire to explain to those who are far from the front line that the war is being waged not only there, but also deep in the rear. The main idea is as simple as two and two:

“However, today’s sabotage in the Dzhankoy region ... suggests the idea that the slippage of the special operation is not due to an underestimation of the enemy’s forces, but mainly because of our indifference”
(the last word has been changed to a more literary one - author's note).

You can't argue with the author. Indeed, there is in our character this same “indifference”. Sleep on duty is a real phenomenon in almost most parts. Negligence, too. Hope lives in us for this notorious Russian maybe. As well as the desire to "not wash dirty linen in public" in order to keep the position.

I quite understand the harshness of Igor's judgments. When you see destroyed houses every day, the corpses of your own and foreign soldiers, injured civilians, it becomes very tight with sentiments. And the judgments acquire a “chopping” character, even scary for a civilian. A coward is called a coward, not a coward. A traitor is a traitor, not a misguided one who believed in propaganda.

I will quote one more quote just as an illustration of my words. You can tell me as much as you like that such thoughts are inhuman and so on. But try to say it there, on the front line, after the attack. Tell those who just got out of the fight.

“One way or another, the situation is changing. It flies here too. This is not good, of course, but the positive thing is that the Crimeans are finally beginning to see clearly about Ukraine, and I hope there will be the same attitude towards yellow-blakyt here as in the Donbass.”

For some of our readers, a series of sabotage that occurred on the territory of Russia came as a surprise. Accusations rained down on the special services, the Ministry of Internal Affairs, military counterintelligence and everyone, everyone, everyone. And already the captures of numerous groups of saboteurs, found caches with weapons and explosives, the destruction of saboteurs in the preparation of sabotage ...

I do not agree with the opinion of Igor Ortsev that everything is in order in the Donbass with the identification of saboteurs. Ukrovoiny are firing too accurately at targets. It is, of course, possible to attribute this to high-precision weapons and intelligence from the United States and Britain, such a good "excuse". But, it is clear that gunners operate in cities. And these are the same saboteurs.

We somehow forgot that after the collapse of the USSR, quite a lot of units that were previously subordinate to the GRU of the USSR remained on the territory of Ukraine. Moreover, these were really elite units and subunits. Such units are protected and even in conditions when the rest of the army is in the corral, they do everything to maintain their combat effectiveness.

Soviet traditions are preserved in the modern Ukrainian army. Again, let me remind you about the saboteurs who were caught by our border guards and the FSB opera on the Ukrainian-Russian border in Crimea. Remember, I hope, Panova. How much noise was about him. A simple hard worker!.. A victim of the arbitrariness of the FSB!.. And then, after returning to Ukraine, the hero is a saboteur.

There is another fact that should have alerted us. At the end of April, British specialists from the SAS (Special Air Service) arrived in the Ukrainian city of Brody. These are far from ordinary scouts. These are specialists in sabotage operations, guerrilla warfare and coup d'état.

In addition, recruitment specialists were part of the group of 20 people. But the most dangerous thing is that these specialists know perfectly well how to organize a guerrilla war on enemy territory. It is not a problem for them to sabotage a nuclear power plant or blow up a plant. This is their specialty.

These saboteurs will not be able to somehow influence the course of the SVO, but they are quite capable of spoiling, as it has already happened. According to many experts, the British style is clearly traced in the sabotage carried out. If not the British themselves, then their students committed bombings and arson. I would like to be wrong, but... Sabotage will continue exactly until the moment when the saboteurs are identified and cleaned up.

In my opinion, there are at least two groups of saboteurs operating in Crimea. It is very likely that the first terrorist attack, I mean the arson of an electrical substation, was a distraction. It is clear that after the arson, all forces will be thrown into the search for the perpetrators. Moreover, the head of Crimea himself became interested in the incident. Or another option, in the first case, a loner acted, who did not even know the purpose of the operation.

Will there be terrorist attacks in other territories of the Russian Federation?

Alas, this possibility cannot be ruled out. And above all, this can happen where objects are located recently or temporarily. Most often, it is in such places that anti-sabotage measures and equipment with special equipment are not 100% completed. And it is there that the opportunity remains to carry and install an explosive device. Stationary military facilities and infrastructure, as a rule, are much better protected in this regard.

I'll start with the Crimea. Today it is a very problematic region in terms of the work of the DRG. The presence of a large number of vacationers, the movement of people from various regions of Russia, Donbass and even Ukraine (from the liberated territories) makes it possible to move agents almost throughout the entire territory of the peninsula. And the grandiose volumes of construction create conditions for the movement of the WU almost without hindrance.

The emphasis will be placed on saboteurs trained in Ukraine. Those agents that were mothballed earlier and are not used today will "come to life" from case to case. It is in such cases, which I described above. Blind, for one-time operations.

The activation of saboteurs is due to the fact that a widely publicized attack on the Crimean bridge and military facilities in the Crimea is impossible. Ukraine does not have missiles that can be used for this. The offensive, which would allow us to capture the coast and strike from there, turned out to be fake. There is only one thing left - the use of DRGs.

Major centers in the European part of Russia - Moscow, St. Petersburg and other key cities - are unlikely to become targets for saboteur attacks. Despite the many ostensibly easy targets, intelligence agencies work well enough there to detect preparations almost instantly. Risking trained agents in such conditions is stupid. Though attempts are possible and there. But they will use "meat" from among the local pro-Ukrainian youths or criminals.

In other territories, terrorist attacks of the second option are possible. There is no special meaning. They will not be able to cause any significant harm to the Russian army and the defense industry, and the information hype can be easily extinguished by putting forward any version of the event.

The border regions of Russia and Belarus remain. There is even less chance of sabotage. Firstly, these areas are not as densely populated as we would like. People know each other and often cooperate with border guards. The appearance of any stranger will immediately become known. Secondly, it is possible to maintain tension there by simple shelling of villages and towns.

Today it is already clear that Kyiv does not even think about any victory. Moreover, it is already obvious that Ukraine has become that same suitcase without a handle for its owners. We would be glad to quit, but they are afraid of losing face. No wonder there are rumors in Kyiv about the imminent replacement of the ataman. The clown troupe is looking for ways to evade responsibility for the crimes committed.

Zelensky understands this too. He realizes that in order to save his own skin, it is necessary to tie his entire team with blood. So that there are no those who can again deceive the people and lead them now against Zelensky. Today, the most dangerous is Defense Minister Alexei Reznikov.

Therefore, a separate regiment of radiation, chemical and biological protection troops has already arrived in Nikopol, Dnepropetrovsk region. Therefore, the shells of American howitzers are tearing the ground near the storage facility with radioactive waste closer and closer. Therefore, the Armed Forces of Ukraine use the banned "Petals" and French mines that cannot be cleared.

I would not be at all surprised at the news that some theater or railway station will be blown up at the moment when there will be a lot of people there. Blood, more blood and then accusations towards Russia. The main thing is that people do not think that they just hate. They hated everyone. Russians, Donetsk, Crimeans, Kherson, Cossacks... And they killed without hesitation...

Be that as it may, the work of our counterintelligence officers has increased. And the civilian population too. You have to fight for life. No saboteur operates in a vacuum. There are always people around him. And these people are quite capable of seeing that a person does not live like everyone else, is engaged in something incomprehensible. Or we them, or they us. That is the question today.