October 17 2012
3
After the end of the existence of the Soviet Union, each of the countries that once belonged to the very “Evil Empire” remained weapons in his army, which was put into service at the best of times. Despite the rather difficult economic situation, many of the countries decided to immediately show their independence and create their own models of firearms. And, of course, they did it, because there is nothing difficult to take a Kalashnikov assault rifle and create a perversion with it, and give the result to its own design, this also applies to many other samples. However, not everything is as bad as it seems. In fact, after some time, new models of weapons began to appear already of sufficiently acceptable quality, and their design made it possible to call them the development of the country in which they were made. There are more than enough examples. In this article, I propose to talk about a sample of weapons that no one expected, moreover, the place where it appeared, no one would ever call a country capable of producing its firearms, since the military-industrial complex is there, as for me personally sadly, developed at the level "below zero". This is a country of lakes and swamps (ask the Germans, confirm) the Republic of Belarus, or rather, the sniper rifle, which was designed here in 2003 year, but unfortunately did not receive wide distribution.

The full name of the sniper rifle is Konev, or simply SVK, but to avoid confusion it is often called VK-003. As such, the main purpose of this weapon is not, it is an attempt to create a sample that would satisfy both hunters and military, and athletes, and if for the former such a weapon would be a joy, then the latter are unlikely to suit it by modern standards. This model once again proved that it is virtually impossible to achieve universality, even with such weapons as a non-self-loading rifle. The versatility of the rifle is achieved in that it has the ability to change barrels for a specific ammunition. So, weapons can be powered by 6 BR Norma, .308 Win, 7,62x54, .338 Lapua Magnum cartridges. In this case, the gun barrels can be in two versions, in a lightweight with an outer diameter of 19 millimeters, and in a heavy one with an outer diameter of 26 millimeters. In the first case, it is possible to install devices for silent firing, muzzle brakes, recoil compensators, and so on. But do not think that the VK-003 sniper rifle is a poor and unserviceable weapon, the phrase that it is unlikely to suit athletes says only that their requirements are somewhat higher for weapons than for hunters and army snipers. The accuracy of the shooting of the VK-003 sniper rifle varies from 0,5 to 1 angular minutes at a distance of 100 meters, depending on the installed barrel and the ammunition used. In my opinion, the most interesting version of this weapon is the version of a rifle chambered for the 6 BR Norma, plus the whole ammunition is little known in wide circles, so we kill two birds with one stone: we will get to know the cartridge and the Konev sniper rifle. Well, I think you should start with the 6 BR Norma ammunition.

This ammunition was developed as a cartridge for target shooting and is considered one of the best cartridges at a distance of up to 300 meters. It can be found under the following names: 6x39 mm Norma Bench Rest, 6 mm BR Norma, XCR 06 039 BGC030 and so on. The metric designation of the cartridge 6x39, that is, it is a bullet caliber 6 millimeters, which is placed in a sleeve length 39 millimeters. Designed by Norma Precision AB. 6 caliber cartridges of millimeters are not a new development at all. The most striking examples of such ammunition are the .243 Winchester, .244 Remington cartridges and, naturally, our Russian 6X49, under which the SVK, SVK-S and TKB-0145 SVK-S and TKB-6 sniper rifles, which were once designed, were designed with SVK, SVK-S and TKB-6, and TKB-6-6 and XK-39 snum rifles, which were once designed by SVK, SVK-S and TKB-220, and TKB-5,6-39 and XK-5,6. Subsequently, ammunition was developed and improved, and new technologies made it possible to replenish a number of six millimeter cartridges with such equally well-known samples as 39mm PPS USA and 1955mm BR Remington. It was one of these munitions that became the basis for the new six millimeter cartridge, namely the cartridge 7,62mm PPS USA. The production of this munition was quickly mastered by Norma Precision AB, but there is no limit to perfection and this cartridge was refined, so the 39x6 cartridge appeared. The main disadvantage of this munition was that the experts believed that the cartridge is based on a rather non-standard cartridge case that belongs to the .7,62 Russian or 39X6 munition in a metric form. By the way, I'm not confused with the 6х62 real-life ammunition created by the Soviet designer Blum in 6,93 for hunting. In turn, this cartridge was based on the 6,8xXNUMX munition case, so that we can say that the XNUMXmm PPS USA is made on the basis of the sleeve of our domestic XNUMXxXNUMX. As a result of the modernization of the ammunition, the sleeve of the well-known cartridge was replaced with the sleeve of the XNUMXmm BR Remington cartridge. At the same time, not only the total length of the munition changed, but also the shape of the compression chutes changed, becoming sharper, which required renaming the munition. This is exactly how XNUMX BR Norma appeared. Besides, the bullet cover was changed to molybdenum, and the bullet length was also increased to XNUMX millimeters, which had a positive effect on its stabilization after the shot. As a result of the elongation of the bullet, the weight of the projectile was increased to XNUMX instead of XNUMX grams. The result of the creation of such ammunition did not take long to wait, he very quickly earned the recognition of both athletes and hunters, and the reputation of Norma, which already was not in the last place in the list of manufacturers of cartridges, rose to heaven. Up to the point that the new ammunition has affected other variants of the cartridges of this company with its success. 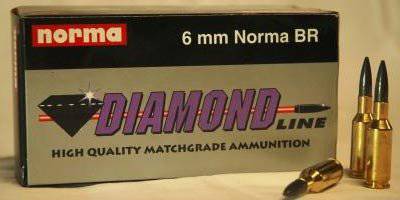 The cartridge itself is a rather unusual ammunition, at least for those who deal more with military versions of ammunition. In the bottom of the bottle-shaped cartridge case, a small-diameter Small Rifle type capsule is installed, the maximum real diameter of the cartridge bullet is 6,18 millimeter, the actual cartridge length is equal to 39,62 millimeter. The maximum pressure in the barrel of the weapon when fired reaches 405 MPa, if the groove pitch is recommended by the manufacturer of the cartridge and is equal to 8 inches. The speed of the bullet at the muzzle is 860 meters per second, respectively, the kinetic energy of the bullet is 2563 Joule. 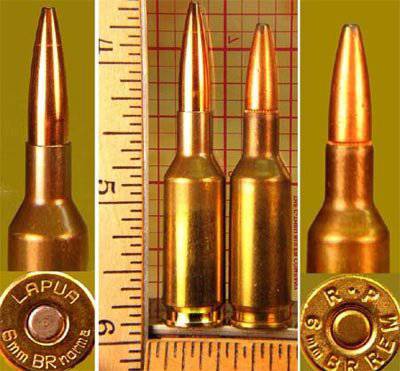 We should also tell about what gave the bullet cover. First of all, this coating facilitates the passage of a bullet through the bore, and therefore should increase the speed of a bullet, in theory. In order to prove the validity of such coverage, the company's specialists made a limited batch of cartridges with a “normal” coating and compared the results. And the results were very sad, since the speed of the bullets with molybdenum coating increased by only 10 meters per second. But who is looking for positives, he will always find them. Knowing that the coating, which facilitates the passage of a bullet through the bore, should at least have a minimal effect on the survivability of this barrel itself, the designers did the appropriate tests, and here the new coating fully justified itself, since it turned out that the barrel, when using such bullets, “lives Almost twice as long. In addition, cartridges with these bullets were quite a bit more accurate ammunition with similar parameters, but with a different coating. Here is such an interesting ammunition, but back to the Belarusian sniper rifle VK-003.

Probably, many have noticed the similarity of this weapon with the Remington 700, in fact it is this magazine rifle that is the progenitress of my countrywoman, and nobody hides it. Like its foreign relative, it is a fairly simple weapon, which didn’t learn how to do, the Papuans left behind in the development of the tribes. The basis for the rifle is a longitudinal sliding bolt that locks the barrel when turning 60 degrees to three lugs. The type of reflector is plunger, which makes it possible to equally reliably throw out the sleeve, both during an abrupt shutter course and at a smooth one. The weapon also has its own characteristics: for example, the receiver is of a closed type, that is, the front and rear ring is not separated, but connected, and on this “bundle” there is a seat for an optical sight. Apparently, hoping that the designer will gain widespread use in the military environment, having created a rifle compatible with shops from the SVD, the “native” store has an 5 ammo capacity, regardless of the ammunition used. Also, the rifle can be fed from the shops M21, with a capacity of 10 or 20 cartridges.

In order to maximally eliminate the influence of ambient temperature and humidity on the weapon, the receiver of the rifle is mounted on an aluminum tire, which, in turn, is already fixed in the composite bed. At the same time, all this is kept on a special glue, the layer of which absorbs vibration. The butt of a weapon can be regulated both in its length and in the height of its emphasis under the cheek within fairly wide limits. There are also several options for mounting bipods: on the seat on the tire, as well as on the swivel head, the first option is of course more preferable. The bottom of the bottom is made flat, which makes it convenient to use it when firing from various stops, for example, from sandbags. Rifle barrel freely hung and does not apply to the forearm of the weapon.

The controls of the rifle are not rich, like all "bolts". With the front of the safety bracket installed lever of the store. The trigger and shutter handle should not raise any questions. On the back of the gate has a fuse switch.

As a matter of fact, the weapon is the most ordinary, made according to long-established schemes, and it was simply not realistic to make it bad. To be honest, I would have walked past this rifle without even paying attention to it, since there are dozens of people like it, and there’s nothing special about it, except perhaps the ability to use quite interesting ammunition and the fact that it’s from the same edges, that I myself. And given that this is almost the only Belarusian model of weapon, then for me personally it should be more expensive than all Nemesis and Barretts. Nevertheless, I do not lose my head. The weapon turned out to be quite average, but the beginning is already there, which cannot but rejoice. It’s only a pity that more News since 2003, in principle, no, but there is a base and bright heads, I think there are, but not a step forward. In general, the active development of promising high-quality weapons is a very profitable business, and already with 5-10 good samples you can earn a world reputation, and this is a lot of money in the country's budget. I don’t understand why others do not see this.