T-62M tanks: how the armor of these vehicles works 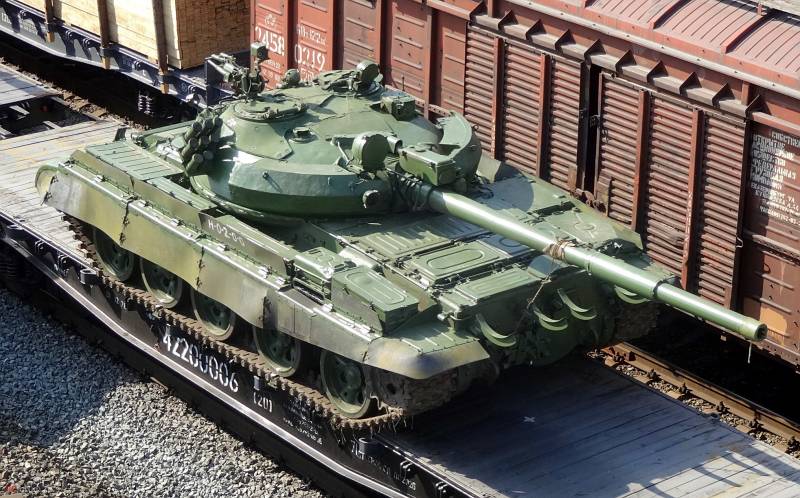 Tanks T-62Ms have been used in the course of a special military operation for more than two months. During this time, the "sixty-two" has become, perhaps, one of the most discussed combat vehicles of recent years. However, in this article, we will not move on to discussions about tactics, the need for it in the current realities, but simply talk about how the T-62M armor works and why it was needed at all.


All information about the car is taken from open sources. 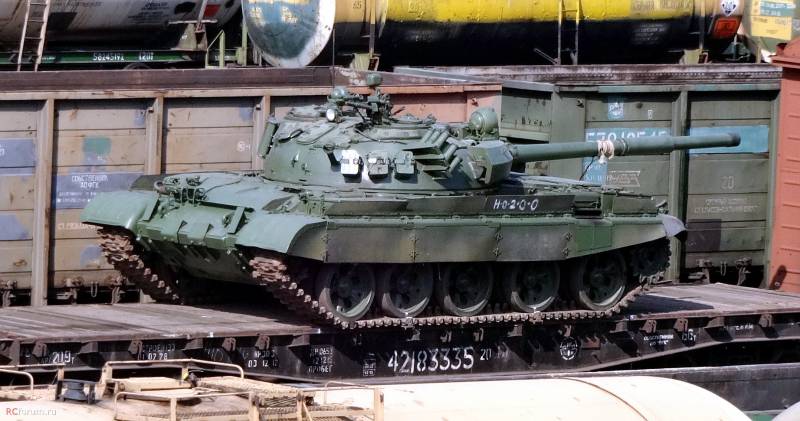 On July 25, 1981, the Central Committee of the CPSU and the Council of Ministers of the USSR issued a resolution on the modernization of the T-62 tanks (and the T-55 too, but about them in another material) bringing their combat capabilities to the level of the early T-64 and T-72 series. And, admittedly, this decision was expedient: there were really a lot of "sixty-two" - they were produced by more than 19 thousand units, although some of them were already in storage and left as assistance to the allied states.

In addition to improvements such as engine upgrades, new undercarriage elements, protection against napalm, radios, and more, the set of measures to improve the tank included a significant expansion of its fire capabilities and increased armor.

The T-62, which received the letter "M", was equipped with a new sighting system with a quantum rangefinder and a ballistic computer. Guided missiles launched through a cannon barrel were introduced into its ammunition load, and new feathered sub-caliber projectiles with a uranium core were developed. The anti-personnel capabilities of the tank were eventually expanded by the shells with ready-made arrow-shaped submunitions that went into series.

To implement this firepower, the vehicle had to have appropriate armor, which, in fact, is of interest to us today. 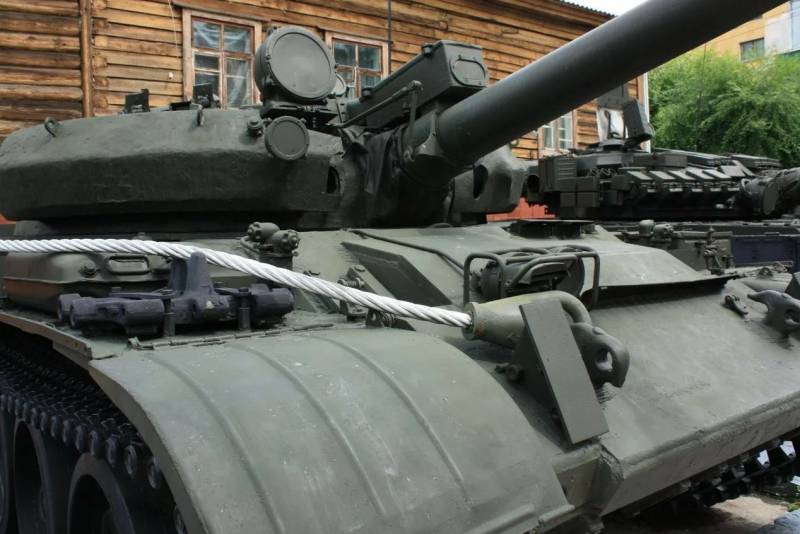 The protective modules on the turret and the upper frontal part of the T-62M hull are clearly visible. Source: dishmodels.ru
It is far from a secret that the main armor of the T-62 consists exclusively of solid steel. The thickness of the upper frontal part of the hull of this machine is 100 mm, and the forehead of the turret is 211 mm, although there are some discrepancies from source to source within small limits. Of course, such armor was already insufficient in the 70s, not to mention the 80s. Modern at that time cumulative and sub-caliber shells overcame it without much difficulty.

To enhance the protection of the tank in frontal projections, Soviet pundits developed a fairly simple, but quite effective (within the framework of the T-62 design) scheme. It consisted in installing an armored box on the upper front part of the hull. The box itself had an external steel cover 30 mm thick, behind which, one after another with a gap of 30 mm, there were 5 mm steel sheets. The space between them was filled with polyurethane. 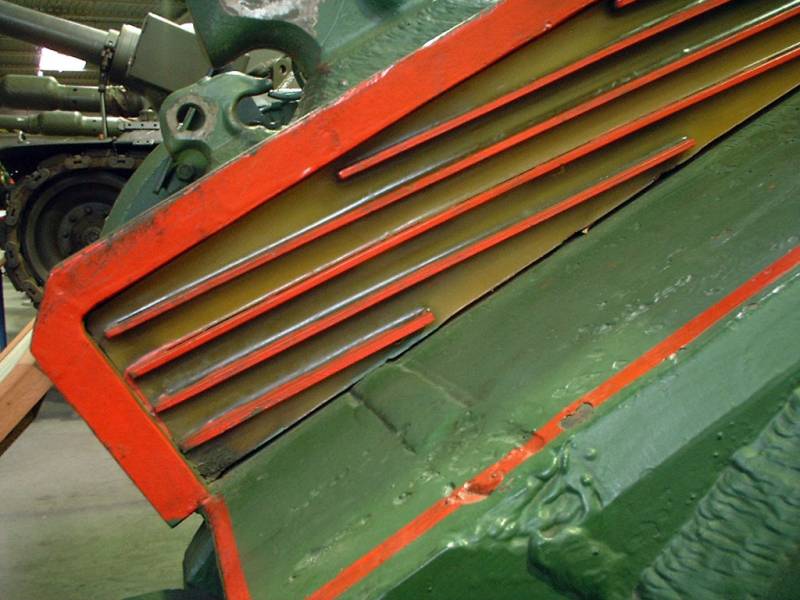 Additional protection block on the upper frontal part of the T-62M hull in section. Source: btvt.narod.ru
The turret armor modules, located to the left and right of the cannon, and nicknamed "Ilyich's Eyebrows", as an analogy to Brezhnev's thick eyebrows, had a similar design: a steel outer casting and 5 mm sheets with polyurethane behind it.

How does this armor work?

It's no secret that HEAT weapons have a much greater penetrating power than sub-caliber projectiles. This is due to the fact that the cumulative jet, consisting of plastically deformed metal, the head of which moves at a speed of 9 km / s and above, makes the steel armor behave according to the laws of hydrodynamics - that is, as in some kind of liquid. But is the devil as terrible as he is painted?

Additional T-62M armor acts against it in several directions at once. But first of all, you need to consider the steel structure itself: the outer cover and the 5 mm thick sheets installed behind it.

It is worth recalling that the cumulative jet is a "triggered" element - reducing its length during armor penetration. Since it does not have its own strength, its head part is literally "smeared" on the edges of the hole in the course of penetration. It is on this that one of the actions of the T-62M armor is based.

At the moment of impact of the projectile on the steel cover of the hinged armor of the T-62M, the formed cumulative jet spends some part of its length on its "breaking" - penetration into the outer layers of the steel mass. In the future, the process more or less settles down, but the lid is not very thick in thickness. Having gone beyond its limits, the jet collides with thinner steel sheets and repeats the same process of "cracking" the outer layers of these sheets over and over again. Due to this, the cumulative jet cannot establish a stable process of penetration into the armor and wastes its length inefficiently.

The second factor in the impact of armor is as follows. Breaking through the barrier, the head elements of the cumulative jet, which are in direct contact with the armor, experience compressive effects. As soon as they break through the armor plate, a phenomenon occurs that can be very conditionally explained by the example of a spring, which was first strongly compressed and then abruptly released. In practice, it looks like this: having penetrated beyond the armor, the head parts of the jet release compression energy and scatter to the sides.

But there are a lot of steel sheets in the armor of the T-62M. Breaking through each of them, the cumulative jet over and over again loses part of its head elements, which scatter after overcoming the next obstacle.

Now let's talk about polyurethane. In fact, it is a quasi-liquid material, which under normal conditions is in a rather solid state. But at the moment of a high-speed impact of a cumulative jet, it begins to behave like a liquid.

In the version proposed by the designers of the T-62 additional armor, there is not much sense from it, but it is there. Firstly, due to its low density, the cumulative jet, having overcome the steel sheet, moves more freely in it, breaking due to the acceleration of the warheads and lagging behind the tails (the speed difference between them can be more than 7 km / s). Secondly, the alternation of densities "steel-polyurethane-steel-polyurethane" further destabilizes the regime of its penetration.

The state of the cumulative jet after overcoming the obstacle "steel sheet + polyurethane + steel sheet". Source: V. A. Grigoryan, A. N. Beloborodko et al. “Particular issues of final ballistics”
In addition, the destructive factors of the T-62M armor can be conditionally attributed to the fact that the cumulative jet does not move in a straight "needle", but in waves. Moreover, the amplitude of its oscillations in most cases is such that, penetrating deeper into the barrier, it increasingly touches the edges of the hole, losing penetration. But this merit is not specifically the protection of our tank - any armor with a large thickness will show similar results.

What do we have as a result? Almost twofold increase in resistance to HEAT artillery shells, rockets and grenades. If before the modernization, the T-62 armor, taking into account the angles of its inclination, could not withstand the impact of ammunition of this type with penetration much more than 200 mm, then after installing additional protection, the maximum equivalent of its resistance increased to 450 mm. And this almost corresponds to the armor of the T-64A and early T-64B tanks.

Speaking about the armor of obsolete vehicles, whether it be T-62M or T-72, you need to understand that their combined protection (polyurethane with steel sheets or fiberglass) works relatively well only against "ancient" sub-caliber projectiles with small hard alloy cores . Monoblock impactors made of ductile alloys based on tungsten or uranium overcome it easily. Hence the conclusion: we will talk about obsolete ammunition.

It should also be noted that the polyurethane in the T-62M armor has practically no effect on sub-caliber shells, so the steel covers of its blocks and the thin metal sheets located behind them come to the fore.

The first thing you need to pay attention to is the angles of inclination of the armor: they are smaller at the turret, and larger at the forehead of the hull. Mounted protective blocks T-62M are also installed at an angle. Unlike a cumulative jet, which does not have its own strength, sub-caliber projectiles, when introduced into an inclined armor barrier, experience a powerful bending effect, amounting to thousands of megapascals. This happens due to the fact that the steel array set at an angle literally “pushes out” the drummer that penetrates into it and bends its trajectory, making it more parallel to the armor.

An example of the curvature of the trajectory of the core in inclined armor. Source: V. A. Grigoryan, A. N. Beloborodko et al. “Particular issues of final ballistics”
This effect leads to the fact that the solid core begins to break down already in the process of punching. Having overcome the cover of the T-62M additional protection unit, the drummer receives additional damage, since the stresses accumulated in it are released, as if releasing a spring compressed in the hands. Thinner steel sheets, the space between which is filled with polyurethane, break the core.

X-ray of a bent core after overcoming a thin steel sheet. Source: V. A. Grigoryan, A. N. Beloborodko et al. “Particular issues of final ballistics”
The body of the projectile (the tube itself with plumage), of course, somewhat saves it from heavy damage, since it moves along with it, but the carbide core reaches the main armor - after the hinged block - rather broken down and with reduced penetration ability.

Also, due to a change in the trajectory of movement, which is affected by the slope of the armor cover of the T-62M hinged protection unit, the core enters the thin steel sheets behind it at an unfavorable angle. Hence its additional destruction and lower penetration. 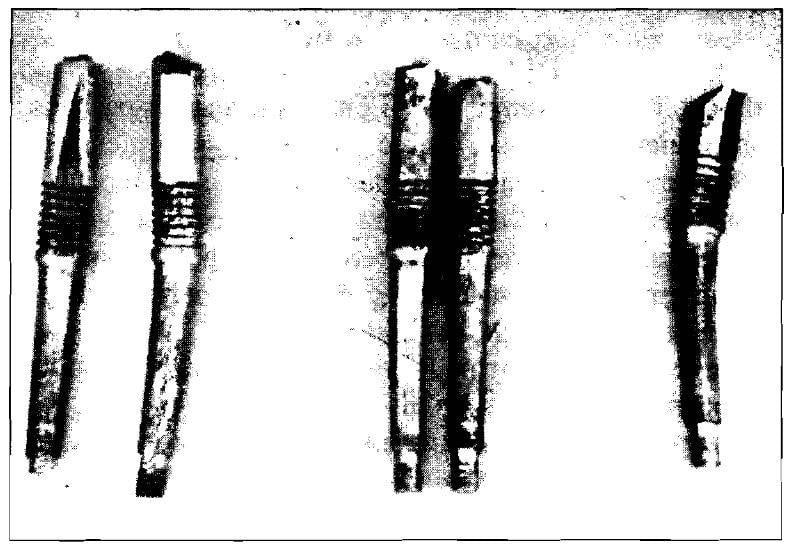 Curved bodies of feathered sub-caliber projectiles after breaking through inclined steel sheets of small thickness. Source: V. A. Grigoryan, A. N. Beloborodko et al. “Particular issues of final ballistics”
Ultimately, such uncomplicated design blocks of hinged protection for the T-62M gave, although not very large, but a very tangible increase in resistance to sub-caliber projectiles, which amounted to more than 150 mm. Taking into account the main armor of the tank, the total equivalent of these ammunition turned out to be at the level 350–380 mm turret and hull.

In the course of modernization, the T-62, which received the “M” index, turned out to be a completely acceptable tank that could be used in non-priority areas, including in local conflicts. Mounted armor favorably distinguished the car from its "brothers", widespread in the early 80s: the American M60, the British "Chieftains" and the German "Leopards 1". For their guns, the T-62M became a tough nut to crack, which, combined with a new sighting system and increased firepower, extended the life of this tank in the ranks, even despite the mass production of new armored vehicles in the face of the T-64/72/80.