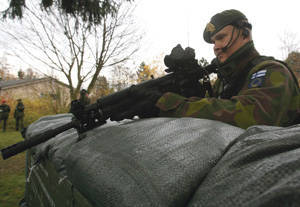 The Supreme Administrative Court of Finland has begun a closed hearing in the case of the so-called "Tiitinen List", allegedly containing information about Finnish politicians who worked in the 70s and 80s for the Stasi (GDR Ministry of State Security). The journalist of the 4th channel of Finnish TV Susanna Reinbot and the leadership of the Finnish security police SUPO (counterintelligence) asked about this.

This case has long excited the minds of the Finns. Many details are still unknown. And what is known contains a lot of unconfirmed information, conjectures and omissions. However, this is understandable - after all, we are talking about the activities of the special services that know how to keep their secrets. Tiitanen's List is no exception. Here's what we learned from Finnish newspapers and other sources.

In 1990, shortly before the unification of Germany, the Federal Intelligence Service of the Federal Republic of Germany (BND) handed over to the chief of the Finnish security police Seppo Tiitanen a secret document from the Stasi archives containing the names of Finnish figures who allegedly worked for intelligence in the GDR. The list was based on information received from the former Stasi resident in Helsinki, Ingolf Freyer, who worked in 1986-1989 under the "roof" of the GDR embassy as first secretary under the name of Hans Pfeiler and in 1989 defected to the FRG. Tiitinen (on his behalf the document was named "Tiitinen's list") immediately informed President Mauno Koivisto (1982-1994), who, having familiarized himself with the list, instructed to close the document in the safe of the head of the CUPO and not take any action. The Finnish leadership took the same position in connection with the fact that the CIA, as part of Operation Rosenholz ("Polisander"), handed over to the Finns in 2000 part of the files from the Stasi archives, where the same names appeared as in the "Tiitinen list". Nevertheless, the SUPO, without notifying the president of this, took some suspects “under the hood”.

However, in September 2002, there was a leak somehow. Finnish radio and television, and then in October - the largest newspaper Helsingin Sanomat, named the name of a Finn whose case is being investigated by SUPO on suspicion of espionage for the GDR and who appears to be on the "Tiitinen list".

It was about the closest aide to the President Martti Ahtisaari (1994-2000) on foreign policy, who replaced Koivisto in 1994, professor and diplomat Alpo Rusi. It is assumed that this was done to prevent Russia from being elected to parliament in the same year. Rusi filed a lawsuit against SUPO and asked the state for 500 thousand euros for false accusations and moral damage and demanded the publication of the full "list of Tiitinen", but was refused.

The claims of Russia and the issue of declassification of the "Tiitinen's list" have been considered in different courts more than once. In June 2008, the Helsinki Administrative Court decided to acquaint journalists with the list. The SUPO leadership did not agree to this, citing the interests of the country's security, cooperation with foreign special services and the protection of the privacy of citizens.

However, the situation may soon change. In September 2007, former President Mauno Kovisto, who had confirmed his negative position back in November 2003, spoke in an interview with the Helsingin Sanomat newspaper in favor of removing secrecy from the "Tiitinen list" and said that the damage from maintaining secrecy would be greater than publication. Tiitinen also agreed with this.

Now, as mentioned above, the case has been transferred to the Supreme Administrative Court, which must render its decision by mid-May of this year. The current chief of the SUPO, Ilkka Salmi, has already announced that his office will be forced to publicize the "Tiitinen list" if the Supreme Administrative Court decides to do so. True, it turned out at the trial that the Federal Intelligence Service of the Federal Republic of Germany, in the course of recent contacts with SUPO, objects to such a turn of events. Official Bonn is still silent, although the German Ambassador to Finland Hans Schumacher stated back in 2007 that the issue of the "Tiitinen list" is an internal matter of the Finns and the FRG has nothing to do with it.

In Finland, more than once a heated discussion has flared up around the case of the "Tiitinen list". The opinions of politicians and ordinary Finns on this issue were divided. Two thirds of Finns are in favor of declassifying the "list". Of the 4 deputies of parliament polled the other day by Channel 167 of Finnish TV, 107 were in favor, only 27 were against. President Tarja Halonen, Prime Minister Matti Vanhanen and a number of ministers, including the Minister of Justice Tuja Braks, are pursuing the line for openness. although they urge not to be hasty in this delicate matter.

So what is this mysterious "Tiitinen's list" that has been causing heated debate in Finland for more than ten years? Does it deserve such attention?

Information about the content of the document transferred by the former Stasi resident to the head of the SUPO in 1990 is rather scarce and often contradictory. Based on the available data, this is nothing more than a list of Finnish politicians with whom the Stasi resident met. Moreover, their number varies from 18 to 20. Among the most prominent politicians are the former chairmen of the Social Democratic Party (SDPF) Kalevi Sorsa and Paavo Lipponen, former ministers Ulf Sundqvist and Matti Ahde (as well as other persons involved in the "list", Social Democrats ). The document does not say anything specifically what their "work in the GDR" consisted of. Mentioned only about "contacts". The rest is from the realm of speculation, which is difficult to verify.

For example, the aforementioned A. Rusi in his book "Cold Republic" claims that P. Lipponen was an agent of the Stasi since 1969 and had the operational pseudonym "Mungo XY / 326/71". Rus himself, according to some, was also on the intelligence lists of the GDR. By the way, he presented to the court his own version of the list of 12 persons who supplied information to East German intelligence, where, of course, his own name does not appear (only his older brother is mentioned).

It is quite possible that the Finnish figures mentioned in the "lists" of Tiitinen and Rus, in the "Rosengolts" dossier, did maintain more or less regular contacts with the Stasi residents - perhaps without knowing who they were actually dealing with. On this basis, they were included in the "agents of influence" of the GDR in Finland (although in fact this is unlikely, given that the residents of the GDR, as a rule, had a low diplomatic status, making it difficult for them to access the top Finnish leadership). True, President Urho Kekkonen (1956-1982) maintained much closer confidential relations with the KGB residents who worked "under the roof" of the USSR Embassy in Helsinki, and even had, as some Finnish researchers claim, the pseudonym Timo (there is no documentary evidence to this effect ). But he used unofficial contacts for his own interests and the interests of his country.

So, in my opinion, the noise raised around the "Tiitinen list" is in vain. I hope that making it public will put an end to speculation and calm Finnish public opinion. It remains only unclear who benefits from this noise. And is it only that SUPO wants to preserve the honor of its uniform and confirm the special, non-state-controlled role of this department in Finnish society, which in all countries the special services always claim (including ours)?