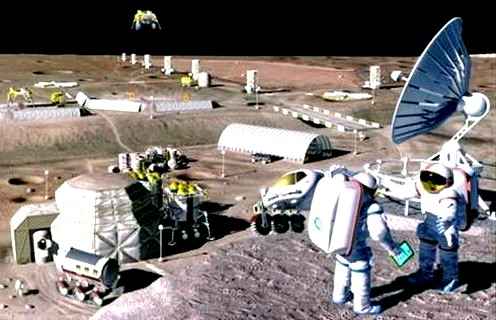 A new direction of practical space exploration was proposed by the inventor “Nikolay Agapov”. Unlike well-known promising concepts, such as the extraction of helium-3 on the Moon or space tourism, the space industry development scenario, published on the website of the International Philosophical and Cosmological Society, does not require inaccessible technologies or unaffordable financial costs, but can attract private investment to the development of space technology. industry and the development of extraterrestrial resources.


The emergence of a concept capable of mobilizing the resources of the world economy for space exploration makes it possible to move from the space exploration phase to its large-scale practical exploration. The main difference of the development scenario proposed by the author is that the stake in it is not on new technologies, but on new methods of coordinating activities, which makes its implementation more accessible, both technically and in terms of funding.

The basis of the space industrial system should be the “Industrial Space Group”, which serves as a means of developing and maintaining near-earth satellites. The satellite industry is an established segment of practical space exploration, with a total turnover of about $ 200 billion, and continuing to actively develop. But satellites, in essence, are automatons strongly tied to the services sector; they are economically advantageous, but cannot serve as a means of further space exploration. In addition, automata in space break down, and the more complex they become, the more expensive the risk of their loss from technical problems, the failure of some short-lived systems, reduces their service life. For the maintenance and repair of satellites in space requires the presence of people and the availability of appropriate infrastructure. The industry, designed for servicing satellites, is a logical continuation of the development of commercial astronautics, from satellites in near-earth orbit to the conquest of space by people. The industrial grouping includes several projects of space transportation systems, a source of raw materials on the Moon, and a commercial orbital station performing the functions of a transport center and a supporting base in near-Earth space.

Specialized carrier - Pony with simplified engines and control systems, has a low loading capacity, but it is simple and cheap, its production can be put on stream at low cost. Due to the limited payload, Pony must deliver satellites to the spaceport in parts, for subsequent assembly and transfer to working orbits.

The Pony-Spaceport system is based on simple and proven technologies, but it is able to provide cargo traffic from Earth to orbit at low cost and creates a sure ground for the commercialization of manned cosmonautics. The operation of this system will significantly reduce the cost of breeding, up to 1000 $ per kilogram of payload, against 3, 5, thousands, typical of typical for the cheapest traditional carriers.
From the empty plastic tanks of the Pony missiles, organic fuel can be obtained at the spaceport, which forms the basis of one of the first commercial productions in orbit.

The basis of the orbital transport systems should be reusable space tugs, with less powerful, but more economical plasma electrojet engines, which receive energy from solar generators. The cost-effectiveness of plasma orbital tugs allows them to transport satellites between working orbits and the spaceport, linking the entire near-earth grouping into a single system. They also allow the establishment of permanent transport bridges to the moon and other planets, which is practically unattainable when using traditional chemical rockets. Transition to reusable orbital tugs will allow to move freely in outer space and significantly reduce the cost of flights between orbits.

One of the features of plasma engines is in their multi-fuel capacity; they are able to consume any available “working fluid”, like components of traditional rocket fuel, neutral liquids such as water or liquid oxygen, and solids in the form of fine powder.

The main fuel for orbital tugs, according to the author, should be powdered lunar soil produced on the lunar fuel base. The production of powdered fuel on the moon requires significantly less costs than liquid substances. “Mineral dust”, besides simplicity in production, has a number of other advantages over liquid fuels, such as high density and stability in storage. It does not boil in vacuum, it easily withstands temperature drops from absolute zero to hundreds of degrees, its storage in space does not require special conditions.
To remove the fuel powder into orbit from the surface of the moon, it is proposed to use a powerful mechanical catapult - a "moon sling", which is a rotor similar to a helicopter, but with kilometer-long ribbons made of Kevlar or carbon fiber instead of blades. Low gravity and lack of atmosphere on the moon allow the use of mechanical devices instead of the usual jet engines.

The lunar sling does not require fuel at all, but it allows to ensure the delivery of raw materials to orbit in industrial volumes, reducing the cost of delivering materials to the cosmos from the moon to purely symbolic compared to removing from Earth.

Lunar soil can be used not only as a fuel for plasma engines, but also as a raw material, for processing into liquid oxygen, ceramic and metal products in orbital production centers.

The cost of creating a powder raw material base on the moon is within 10 billions of dollars, which does not go beyond the investors' capabilities, but the available lunar resources will significantly reduce the cost of orbital transport and create the soil for the development of various productions in orbit. A commercial lunar resource base provides an economic rationale for human activity on the moon and its further industrial colonization.

Orbital stations must perform many different functions, serving as transportation centers, bases for orbital tugboats, for various types of assembly, technological or production activities, playing the role of supporting bases for human activity in near-Earth space.

The entire near-Earth transport operational system should work to maintain commercial orbiters, returning the funds invested in it in the form of reducing the cost of space services.

The activity of the industrial grouping allows you to repeatedly reduce the cost of launching satellites and increase their service life to virtually obsolescence.

In addition, it creates opportunities for the development of new projects, such as low-orbit communication satellite systems with high-area grid antennas that can receive cell phone calls and broadcast to personal television and radio receivers, which will make space information services affordable and widely available, attracting space tens of billions of dollars of new investment.
Space solar power plants consisting of ultralight, film, concentrating large-area mirrors and industrial-power generators that can form the basis of a clean and fuel-free global energy system of the future, increasing the speed of the space group to hundreds of billions and trillions of dollars and turning it into one of the leading global industries.

The development of cosmonautics according to the proposed industrial scenario makes it possible to create a strong space grouping, including permanent transport infrastructure, lunar and orbital industrial centers in the next few decades. With such a space grouping, humanity will be able to begin the active exploration of space and nearby planets, which would entail the transition of human civilization to the cosmic level from the planetary level.

The flights of the first rockets made outer space accessible, but after 50 years of cosmonautics development, the space expansion of mankind is still perceived as futuristic fiction. The scientific community has adopted the opinion that the main obstacles to the colonization of space are the high cost of space projects and the insufficient level of technology for this. But the Agapov development scenario makes space exploration economically viable and affordable for modern investors, allowing it to begin its colonization in the near future.

According to the IFPC

Ctrl Enter
Noticed a mistake Highlight text and press. Ctrl + Enter
We are
Military base on the moon (cosmic prospects of pneumatic electric weapons)To Mars through the Moon
5 comments
Information
Dear reader, to leave comments on the publication, you must to register.