Conditional aircraft with a new air intake, drawing from the patent

Currently, PJSC Tupolev is developing a "Promising aviation complex for long-range aviation"(PAK YES). Not much is known about this project, and even the appearance of the future bomber remains a mystery. Secrecy is expected to attract attention, and also contributes to the emergence of various versions and assessments. This time, the reason for far-reaching forecasts was a utility model patent issued by Tupolev.

It is well known that the Tupolev company, independently and together with related organizations, constantly conducts various research projects. Some of the results of such activities are used in real projects of aviation technology, and are also patented.

Thus, in August 2021, an application for a utility model “Aircraft Engine Air Intake” was filed with the Russian Patent Office. The authors of the invention are O.V. Bukharov, V.F. Gurov and O.O. Kataev. Patent number RU209424U1 was published on March 16, 2022. Its owner is Tupolev PJSC. The document provides a description of the air intake and air duct for a turbojet engine. Attached to it are diagrams of such a product, inscribed in the airframe of the aircraft.

At the time of publication, the patent went unnoticed. They paid attention to it only at the very end of July with the filing of Aviation Week. The latter indicated that the aircraft, schematically depicted in the patent, is similar to the description of the promising PAK DA bomber.

The publication in Aviation Week and the patent RU209424U1 itself naturally attracted attention and became the reason for new articles and discussions in specialized publications. At the same time, several main themes are noted in all publications. First of all, this is the similarity of the hypothetical PAK DA with other well-known bombers, such as the B-2 and B-21. In addition, negative forecasts are made with demonstrative confidence: under sanctions, with economic problems and without foreign components, Russia allegedly will not be able to build such an aircraft.

View from above
It should be taken into account that the reason for these discussions was only the assumption of a certain relationship between the March patent and the PAK DA program. Whether they have a real relationship to each other is unknown. Even if such a connection exists, its nature and extent also remain in question.

The patent describes the design of an air intake designed to be placed on an aircraft wing near its leading edge. The design of the air duct connecting the intake device with the inlet apparatus of the turbojet engine is also given. It is noted that the proposed design gives the air intake and the channel the required strength and rigidity at all angles of attack and in all flight modes. In addition, the load on the airframe is reduced.

The attached drawing shows an irregular trapezoidal air intake on the upper surface of the wing near its edge. Behind it is placed an air duct of complex shape. It runs along the axis of the airframe and bends in a vertical area - the front section of the channel is much higher than the rear.

The air duct has a cross section in the form of a rectangle with rounded corners. Such a unit is placed and fixed inside a rigid shell with an elliptical cross section. It is the shell of the air duct that will join the power elements of the airframe and ensure the connection of all elements.

The design of the air intake and the method of its placement inside the airframe are shown on the example of a conventional aircraft of the “flying wing” scheme. The drawing from the patent shows a glider with several salient features. Its main part is the carrier plane. On top of it there is a rudimentary fuselage with cockpit glazing and protruding air intake units.

Longitudinal section along the duct
The wing is swept. At the same time, the leading edge is broken: the sweep of the center section is greater than that of the consoles. The trailing edge also consists of several elements. So, in the center section it has a slight negative sweep, and under it are the engine nozzles. The wing profile is also interesting, shown by the section along the air intake. A characteristic bend is provided in the front part, and due to the presence of internal units, such a section is distinguished by a large height.

The layout of the airframe is only partially clear. You can see where the cabin is placed, and how the twin-engine power plant is located. Other structural elements in the drawing are not indicated. However, one can imagine possible ways of placing the cargo compartment, fuel tanks, etc.

Earlier it was reported that the PAK DA bomber will be subsonic and stealthy, and will also show improved flight characteristics. To obtain such qualities, it will be built according to the “flying wing” scheme. However, some of this information has not yet been officially confirmed. The rest of the information is completely missing.

However, information about the "flying wing" was already enough to identify the conditional aircraft from the patent with a real strategic bomber. Indirect evidence of this version was some features of the aircraft from the drawing and the expected qualities of the future PAK DA. At the same time, direct evidence is not yet available - as well as explicit refutations.

To what extent the version of PAK DA in the patent corresponds to reality is not yet known. The situation will become clear only later, when the real appearance of the promising bomber will be officially revealed. It can be assumed that the current versions, if confirmed, are only partially. Only a few similarities are to be expected. 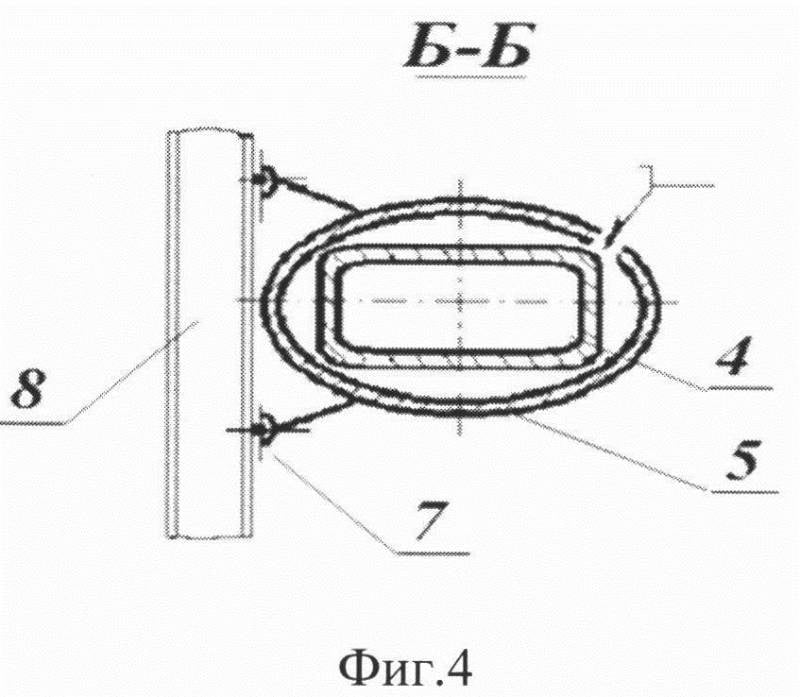 Cross section of the channel: 4 - channel itself; 5 - hard shell; 7 - attaching the shell to the airframe; 8 - structural strength element
It should be noted that patent RU209424U1 is interesting not only in the context of the promising PAK DA program. The very fact of its appearance shows that Tupolev and other domestic organizations and enterprises are conducting scientific work and creating new designs of various kinds. For well-known reasons, such developments are protected by patents.

The new patent also shows that Tupolev is studying new schemes and concepts, as well as looking for optimal solutions for them. In particular, an air intake and a curved air duct designed specifically for the "flying wing" have been developed. Such a scheme is not yet popular in the domestic aircraft industry, but it is being studied and developed.

How the patented development will be used is unknown. It can find application in promising projects of aviation technology, incl. in the class of the expected PAK YES. However, it cannot be ruled out that such a design will not find real application - although it will add to the list of potentially useful developments of our aircraft manufacturers.

Thus, the excitement observed on specialized resources may be unjustified. The version about the connection between the March patent and the PAK DA program does not yet have sufficient evidence, and all the available arguments are indirect. The situation will become clear only in the indefinite future, when at least the layout of the new strategic bomber will be officially shown.

However, this does not prevent us from making the most daring assumptions. Thus, the foreign press has already stated that Russia will not be able to build such an aircraft. Apparently, in the future, after the premiere of PAK DA, foreign experts will change their minds. And with the same confidence they will begin to assert that the aircraft will not reach the series and will not fall into the troops.