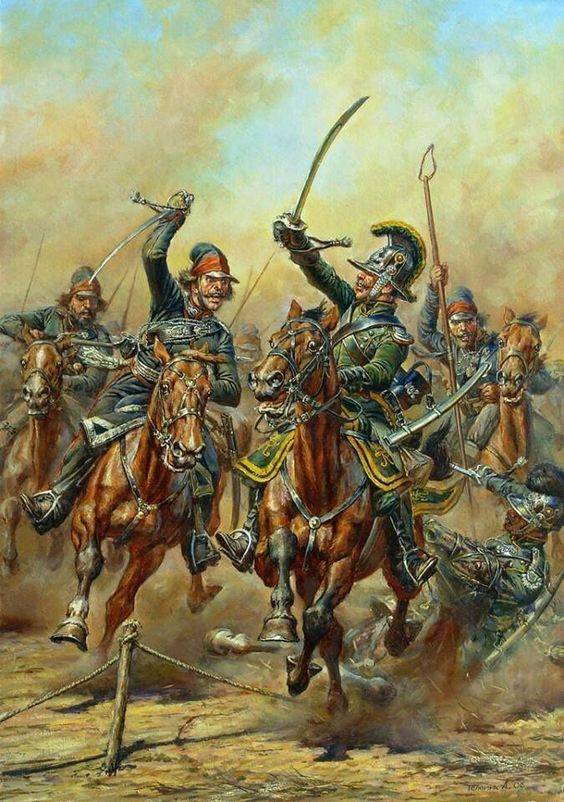 On the night of July 26-27 (August 7-8), 1812, the commander-in-chief of the Russian army, Barclay de Tolly, received from the commander of the special cavalry detachment Ferdinand Wintsengerode, sent to Velizh, the news of the concentration of significant French forces near Porechye. The Russian command concluded that the 4th Infantry Corps of Beauharnais and the 1st Cavalry Corps of Nansouty were concentrated there, and the main forces of Napoleon were moving behind them. There was a possibility that the enemy wanted to cut off the Russian army from Moscow, moving from Porechye to Smolensk.

On July 27, part of the 1st Army (2nd, 4th, 5th Infantry and 1st Cavalry Corps) was transferred to the Porechenskaya road, the rest (3rd and 6th Infantry, 2nd and 3rd th cavalry corps) under the command of Dokhturov stopped at Prikaz-Vydra. Barclay also instructed the commander of the 2nd Army, Bagration, to transfer his forces to Prikaz-Vydra, where, in his opinion, the position was more advantageous than that of Smolensk. Barclay de Tolly informed Emperor Alexander the First that this maneuver would allow him to strike with superior forces on the left flank of the French army, secure the left flank of Wittgenstein's corps and cover the road to Moscow. That is, Barclay wanted to take advantage of the disunity of the French corps and break them up separately. 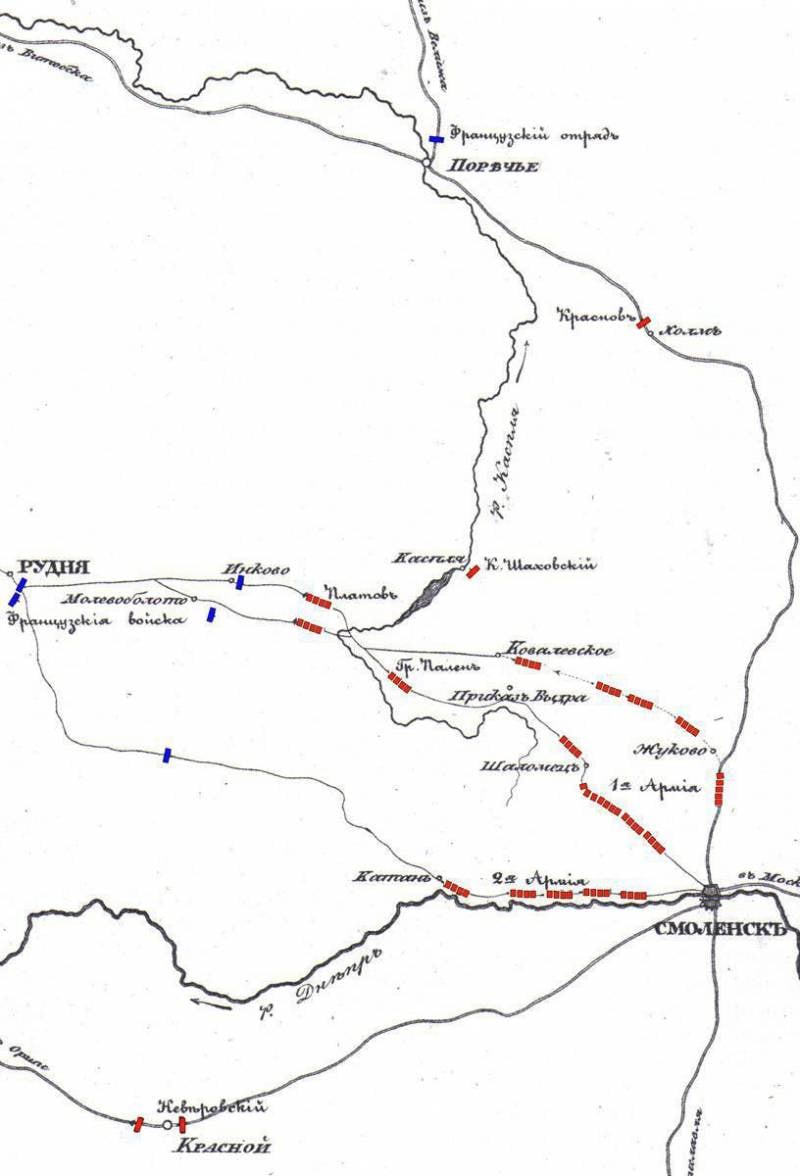 On July 27 (August 8), 1812, a battle took place near the village of Molevo Boloto. This was the first serious battle with the French after the connection of the two Russian armies. At the forefront of Zarubenka stood Ataman Matvey Platov with 7 Cossack regiments. In reserve at Platov, near Order-Vydra, there were 32 squadrons of light cavalry and the Jaeger brigade of Count Palen 2nd. The commander of the forward detachment, Major General Vasily Denisov, who was standing near the village of Kastritsyna, told Platov that an enemy had been detected from the side - 9 cavalry and 1 infantry regiments. Platov ordered, if possible, to restrain the enemy until the arrival of reinforcements. The chieftain himself with the main forces and 12 guns moved to help Denisov.

Near the village of Molevo Boloto, the Cossacks found 2 French hussar regiments. Four Don regiments and two hundred Bashkirs under the command of Denisov overturned the enemy cavalry and pursued the French to Rudnya, where fresh enemy forces were discovered. The Cossacks came under attack from the superior forces of the light cavalry division of General Horace Sebastiani (2nd Cavalry Corps of Montbrun). The Cossacks began to retreat to the main forces of Platov. 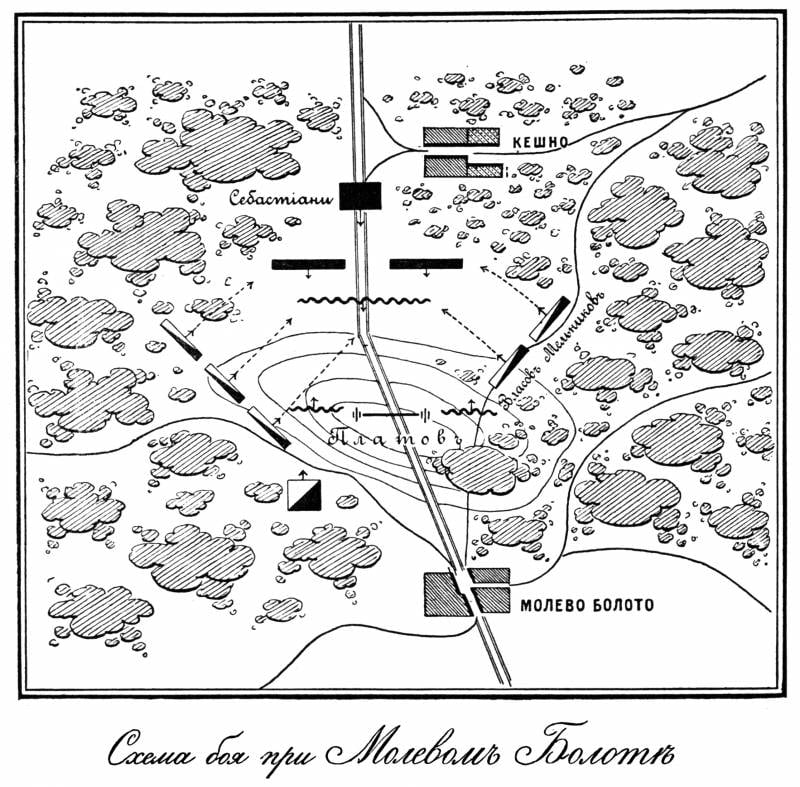 Scheme of the battle at the Molevoy Bog. Source: V. V. Puzanov. History 5th Don Cossack Military Ataman Vlasov Regiment
Matvey Ivanovich sent against the left flank of the enemy Major General Kuteynikov 2nd with three regiments (Atamansky, Kharitonov 7th and Simferopol Tatar). The guns were placed in the center and they opened fire. The French attacked the Don artillerymen, but at the critical moment of the enemy, the Cossack regiments of Melnikov 3rd and Kharitonov 7th counterattacked. The Don people saved their guns, cut down the French infantrymen and overturned one of the regiments of the Sebastiani division. In a hot battle, the regiment commander Melnikov fell.

Atman of the Don army, seeing the disorder of the French troops, attacked with all his might. The French were defeated. Donets drove the enemy for two miles. Then the enemy was pursued by a detachment of Palen. Izyumsky, Sumy and Mariupol hussar regiments drove the French for about another eight miles. Then they were forced to retreat from the superior forces of the enemy. The French suffered significant losses in this battle, only the Cossacks took more than 300 prisoners. 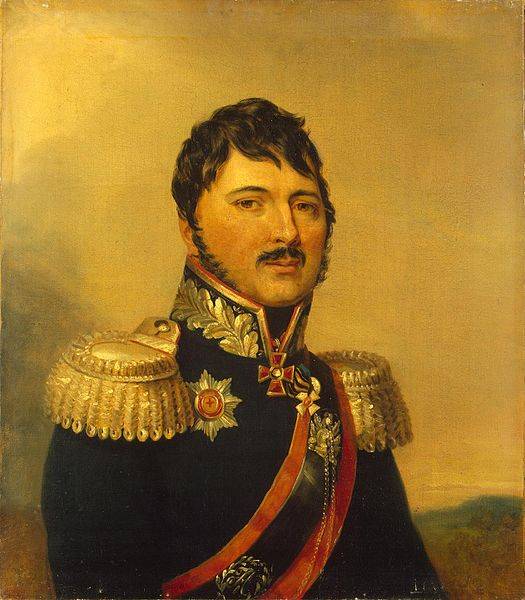 Vasily Timofeevich Denisov (1771-1822) - Cossack commander of the era of the Napoleonic Wars, major general of the Russian army. Portrait of the workshop of George Dawe. Military gallery of the Winter Palace

In his report, the Don ataman wrote:

"The enemy did not ask for forgiveness, but the Russian troops of His Imperial Majesty were furious, stabbed and beat him."
The fact is that the Russian troops were furious with the actions of the Great Army of Napoleon. The Cossacks then acted as military intelligence, so they knew what was happening in the zone of action of the French army. An almost all-European horde (the French, various kinds of Germans and Italians, Spaniards, Dutch, Poles, etc.) behaved in Russia like a wild horde.

Platov reported to Barclay that

“The extraordinary image of war used by the French is appropriate only for one barbarian. Not only do they rob villages, landowners' houses, beat the inhabitants, rape their wives and daughters, they act mercilessly with the priesthood, torture and extort money from them ... "
European marauders and rapists subjected temples and churches to robbery and desecration.

Among the papers captured by the Don in the battle on Molev Bolot was Murat's order, in which he informed Sebastiani of the enemy's desire to send the main forces to Rudna and instructed him to withdraw the cavalry to the infantry. Despite this news, the Russian army continued the flank movement that had begun.

The French emperor, having learned about the failure of Sebastiani's division at the Molevoy Bog, saw the threat and took measures to concentrate his forces. Napoleon ordered Murat and Ney to keep the Russians on the Rudny road as far as possible. Three divisions of Davout's 1st Infantry Corps, stationed near Vitebsk, and the 4th Corps of Italian Viceroy Eugene Beauharnais headed towards Liozno to join Murat and Ney. Parts of Davout, Junot, Poniatowski and the cavalry of Latour-Maubourg were to link up at Lubavitch. By July 30, Napoleon planned to have about 180 thousand soldiers under his arm.

Barclay's hopes for the extension of the corps of the Great Army did not materialize. The enemy still had a noticeable numerical superiority. An attempt to engage in battle with Napoleon's army could lead to a heavy defeat for the Russian army.