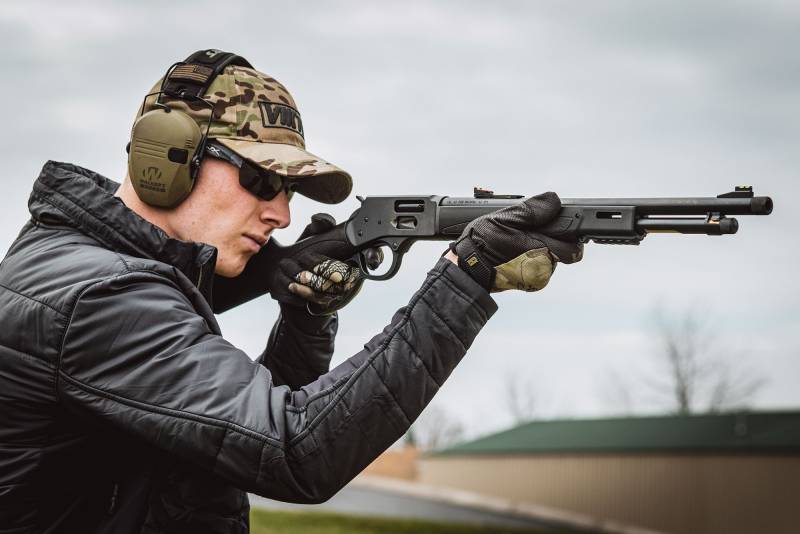 A modern hard drive from Anthony Imperato looks like this ... Photo by Henry Repeating Arms

Join the ranks of the rebels, with a carbine 30-30,
I will step in for the freedom to fight.
And if my blood is needed
Then I will give my blood
For the citizens of my country.
"Carbine 30-30". The song of the Mexican rebels Pancho Villa, which refers to the Winchester rifles chambered for .30-30 Win.
stories about weapons. In every field of human activity there is a select group of people who are credited with such a significant contribution to its historythat they become synonymous with their own achievements. There are many such names in the field of firearms development. Actually, it’s not that there were “a lot” of them, on the contrary, there are a lot of them. However, over time, these names are forgotten, because this list is growing, and new names are crowding out older ones. But there is one name that will always be included in this honorary list - the name of Benjamin Tyler Henry.

Classic of the genre: Tyler Henry rifle by Antonio Imperato with engraved action. View from the left. Photo Henry Repeating Arms
It was Henry who developed the world's first practical and reasonably convenient lever-action repeating rifle, patented in 1860. In the end, it turned out that he put into the hands of one man such firepower as a dozen shooters armed with muzzle-loading muskets at that time possessed. 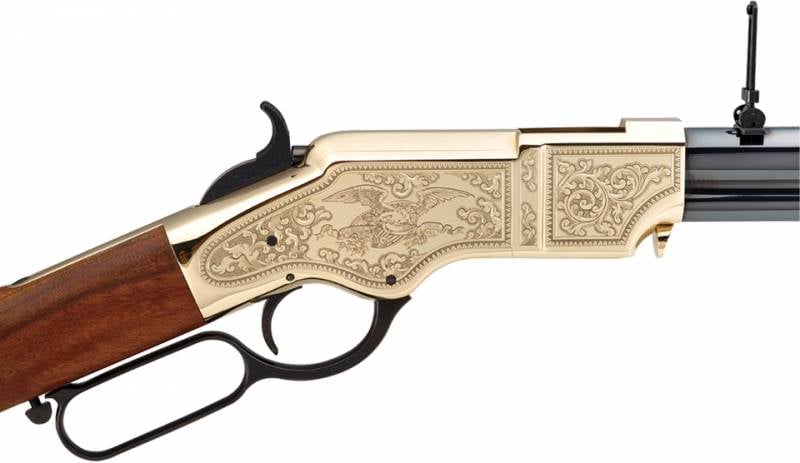 The same rifle. Close-up engraving. Right view. Photo Henry Repeating Arms
The novelty came, as they say, on time. America was engulfed in the flames of the Civil War, and many weapons were required. Therefore, it is not surprising that by the middle of 1862, the first Henry rifles were in the hands of the soldiers of the northern states. Thanks to its revolutionary design and high rate of fire, the Henry rifle quickly gained popularity among both the military and the civilian population. The first sales were successful in such states as Kentucky, Illinois, Missouri and Indiana. 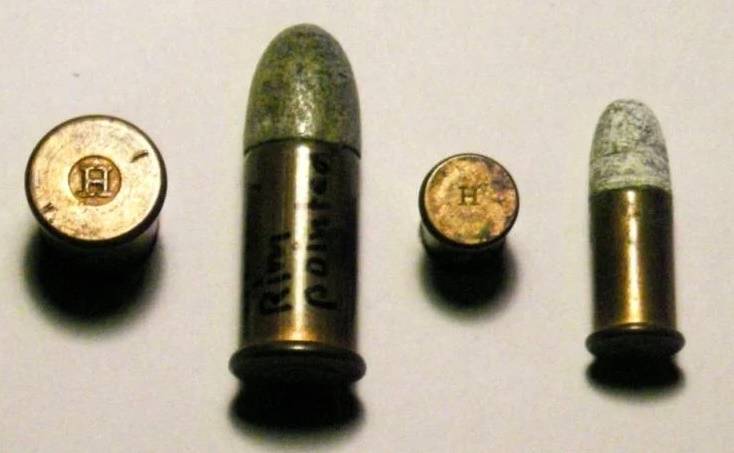 "Side fire" cartridges of .44 and .32 caliber. Photo by Alain Daubresse
The rifle used a fairly powerful .44 caliber (11 mm) rimfire cartridge loaded with 28 grain black powder and a 200 grain pure lead bullet (the weight of one troy grain was 64,79891 mg).

Thanks to this reliable rimfire cartridge, the Henry rifle fired quickly and very accurately. There were many reports of their successful use in war. For example, in the battle at the Allatuna Pass, it was they who helped stop the onslaught of the southerners.

“That day we were saved by the fact that we had several Henry rifles,”

Major Ludlow wrote in his report.

“Our company of 16 riflemen jumped up to the parapet and opened fire so fast and deadly that not a single person could resist it, and after that no serious effort was made by the enemy to take the fort by storm.” 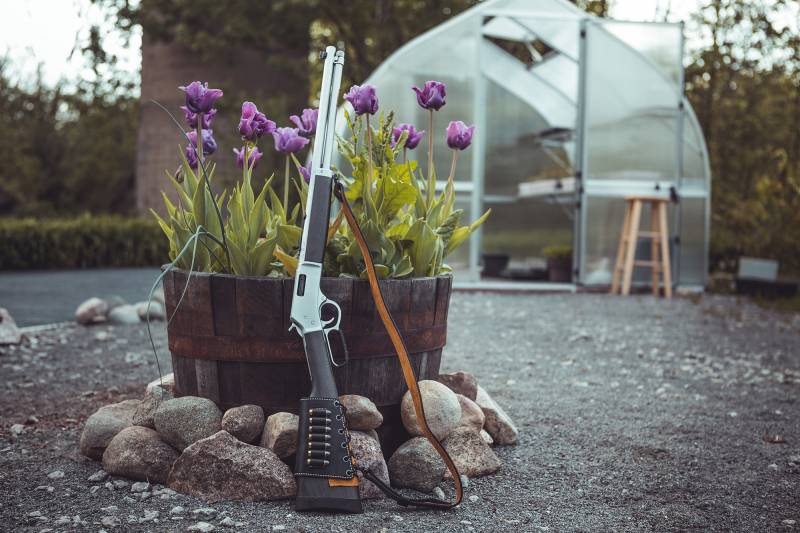 Wow, what an economic man: he has both a greenhouse and a carbine. The author of this material can only console himself with the fact that he has three such greenhouses, and much larger ones. But there will never be such a carbine ... Photo by Henry Repeating Arms
After an encounter with the 7th Illinois Volunteer Infantry Regiment, which was lucky enough to fight with these rifles, one Confederate officer was credited with the phrase:

"It's a rifle that can be loaded on Sunday and fired all week." 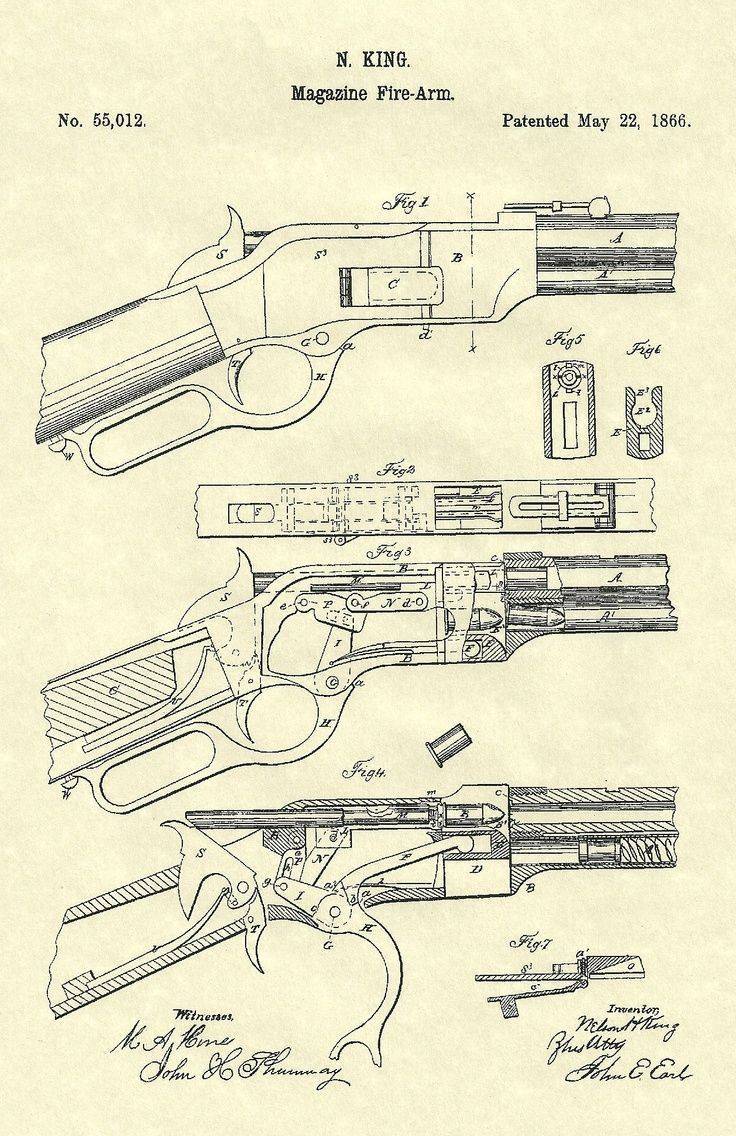 Nelson King patent 1866
The Henry rifle continued to play a significant, if not dominant, role in the frontier skirmishes of the American Wild West. And it is not surprising that the enterprising businessman Oliver Winchester acquired a patent for it. And then he bought Nelson King's patent for his "royal innovation" - the side door of loading the magazine, which made this process just exceptionally easy. With this "door", the Henry rifle under the brand name "Winchester" became one of the most legendary, respected and sought-after rifles in the history of firearms. No rifle collection is complete without it.

The Winchester became a legend, and the interruptions in its release and, accordingly, the demand in the secondary arms market showed that the production of the Winchester on a new production base would have a well-founded commercial success. This is how the Henry Repeating Arms company appeared in the USA ... 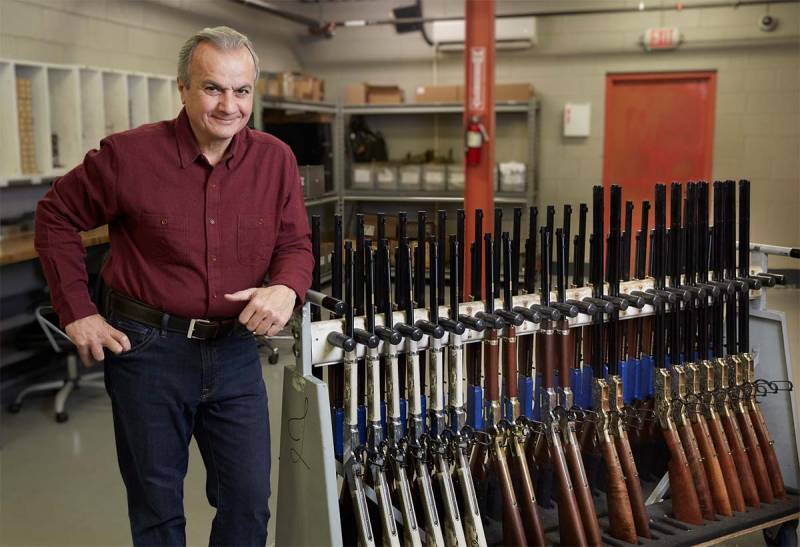 Henry Repeating Arms founder and CEO Anthony Imperato poses at a rack of his rifles at the company's Bayonne, New Jersey factory. Photo Henry Repeating Arms
And today, his company officially begins its 29th anniversary as one of the country's largest manufacturers of long-barreled and lever-action weapons. 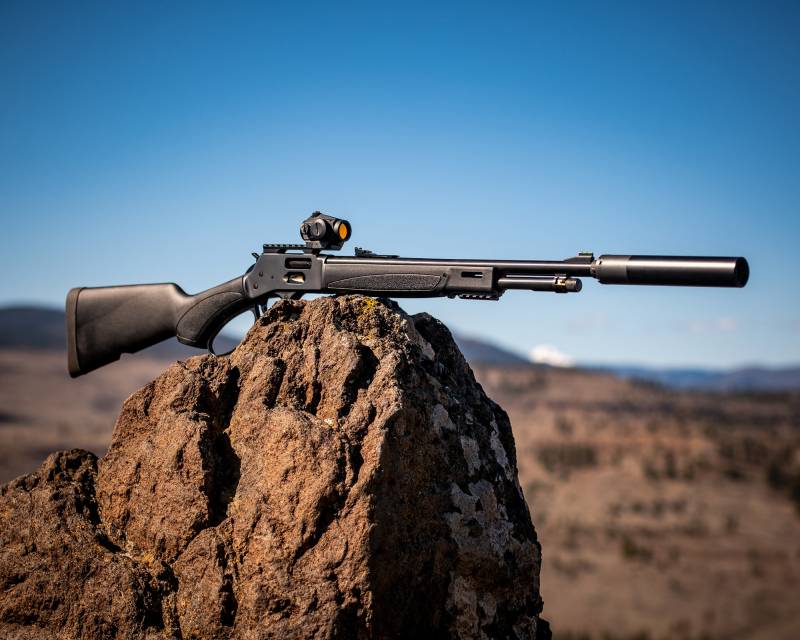 But this is the "Winchester" of today. The legend continues! Photo Henry Repeating Arms
Anthony Imperato made his first foray into gun manufacturing in 1993 by taking out a house loan to found the Colt Blackpowder Arms Company, which would manufacture historic Colt revolvers and muskets under license from Colt's Manufacturing. Drawing on the family's years of experience in the gun business, he began development of a lever-action rifle chambered for rimfire in 1996 with his father, Louis Imperato. And already in March 1997, they released the first model Henry Repeating Arms H001 Classic Lever Action .22 caliber, which began to be produced by a small factory in Brooklyn, New York.

Here it is - the first "Winchester" Imperato rifle: H001 Classic Lever Action .22. Photo Henry Repeating Arms
The company is currently headquartered in Rice Lake, Wisconsin. The company employs over 550 people and operates three manufacturing plants in Wisconsin and New Jersey. In doing so, it manufactures over 200 different rifles and shotguns in a variety of calibers for hunting, home defense, collecting and a wide range of shooting sports. Notable achievements include the company's flagship rifle, the Henry Golden Boy .22, its centre-fire counterpart, the Henry Big Boy, a full line of youth rifles and shotguns, an extensive collection of engraved Henry (namely Henry, not Winchester) rifles, and the popular a modern example is the X Model series. The motto of the company is more than patriotic, although it belongs to the Italian:

"Made in America or not made at all."

"Big boy" for a big beast. The Henry Big Boy X can take down a deer up to 100 yards and, like the 1873 Winchester, fires the same cartridges as a revolver of the same caliber. Its barrel can be equipped with a silencer, a tactical flashlight and other accessories, for which it has built-in Picatinny and M-Lok rails. Rifle capacity: 7 rounds. Can fire .357 Mag.38 Spl, .44 Mag, .44 Spl, .45 Colt. Photo Henry Repeating Arms 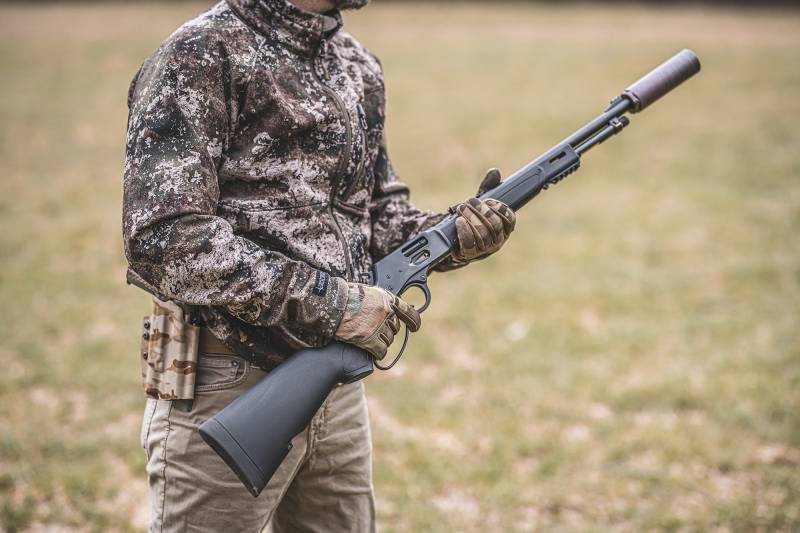 You can put a silencer on the rifle! Photo Henry Repeating Arms
All Henry rifles and shotguns are backed by a lifetime warranty, personalized by Anthony Imperato. Moreover, the award-winning customer service department is empowered to make any decisions to ensure the full satisfaction of the firm's customers. In 2016, Henry Repeating Arms was named the recipient of the Stevie® Award in the Customer Service Department of the Year category at the American Business Awards.

For those who like to show off, there's also this: the Big Boy Deluxe Engraved 3rd Edition hand-engraved rifle chambered in .44 Mag/Spl, .45 Colt, .357 Mag/.38 Spl. Photo Henry Repeating Arms
Through the charitable affiliate of Guns For Great Causes, Henry Repeating Arms has made significant financial donations to children's hospitals and families of seriously ill children. Interestingly, Guns For... also helps support active duty and veterans' organizations, law enforcement and first responders, Second Amendment organizations, shooting education, and wildlife and habitat conservation groups. As part of its 25th anniversary celebration, the company launched 1000 Golden Boy "Silver Anniversary" Limited Edition rifles to raise a total of approximately $1 million to distribute to all of these organizations.

"I'm incredibly proud to have been building Henry rifles all these years, but I'm even more proud when I look to the future."
Where such confidence? Yes, just fans and buyers of "hard drives" of all types and finishes have something to expect this year and in the future.

AR-7 from Henry Repeating Arms. Photo Henry Repeating Arms
The company managed to "make friends" with the US Air Force. The point is that they needed a small caliber rifle that they could rely on if they had to crash in a remote wilderness area. And in 1959, such a “survival” rifle AR-7 was created. Over the years, the AR-7 was considered the best in its class due to its portability, ease of operation and reliability, and, accordingly, over time, it also entered the civilian market. Today, it is a favorite not only with pilots, but also with hikers and adventurers who, like their Air Force counterparts, want a rifle that is easy to carry but has the accuracy to reliably kill small game. 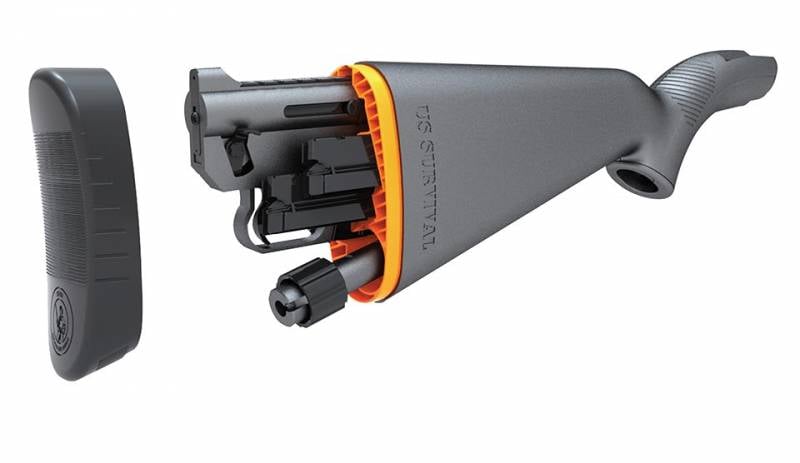 And this is what it looks like disassembled. Photo Henry Repeating Arms
Like the original rifle, the Henry US Survival Rifle is an innovative semi-automatic rifle, lightweight (1400g) and highly portable. At just 16,5 inches (42 cm) long, when folded, it fits easily into the cargo hold of an airplane, boat, or even a backpack. The .22 LR cartridge is light enough that the shooter can carry a large amount of such ammunition without adding to the overall weight of his equipment. When disassembled, the parts are placed inside a shock-resistant, water-resistant stock. The assembly consists in attaching the receiver to the butt, after which the barrel must be inserted into the receiver and secured with a nut. In just a few seconds, without any tools, the AR-7 is ready for action. It comes standard with a rugged steel housing covered in highly durable ABS plastic with a protective coating to ensure corrosion resistance. The rifle is available in black and in two camouflage colors. All models are equipped with an adjustable whole and front sight. 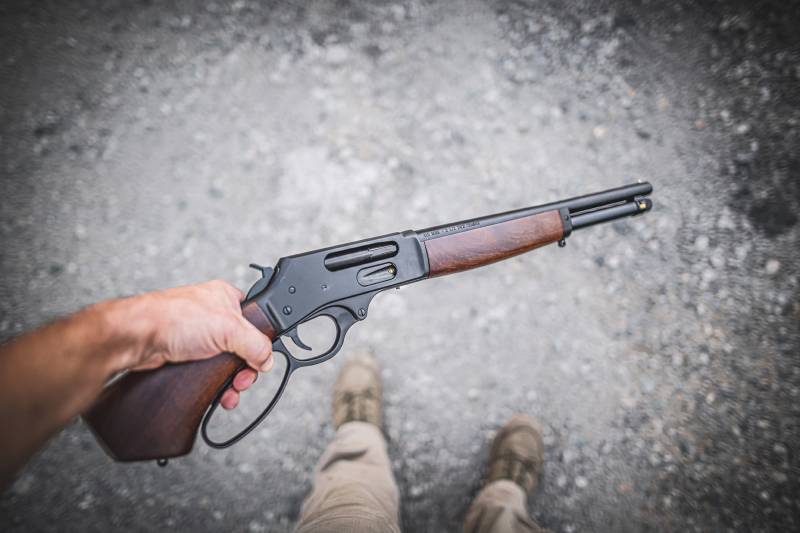 Well, the real kulak sawn-off shotgun, isn't it? However, in the US, such weapons can be quite legally purchased in a store. And it is clear that the Imperato company also organized the release of such samples. Photo Henry Repeating Arms

The .410 caliber rifle (Lever Action Ax .410 - only for a two and a half inch case) is a compact enough example, so that you can store it almost anywhere, both at home and in your car. Photo Henry Repeating Arms
Because of this, many believe that this gun is the most practical in terms of self-defense and protecting your home from uninvited encroachment. The magazine capacity is only five rounds, but more, as they say, is usually not required in this case! There are also samples chambered for 12 and 20 caliber cartridges.

Variants with butt "mare's leg". Photo Henry Repeating Arms
The Big Boy Steel Side Gate (“Big Boy of Steel with Side Gate”, a funny name for a weapon, if you follow the rules of the literal translation) is the lightest lever-action center-fire rifle, which is useful if you have to cover long distances on a hunt. The Big Boy Steel features a 20" or 16,5" round blued steel barrel, real American walnut ribbed stock, and a recoil-reducing rubber butt plate. It is available in three proven revolver calibers, making it an excellent choice for both hunting and home defense.

Here's what that pattern looks like! The bolt box from Marlin is also taken as a basis. It is more convenient than the "Winchester" one, since it is easier to install optical sights on it. Cartridges that can be used: .30-30 Win, .38-55 Win, .35 Rem, .45-70 Gov't. Magazine capacity: 10 rounds (rifle) / 7 rounds (carbine). Photo Henry Repeating Arms
Well, as a result, you can see that all these carbines and rifles are still in demand all over the world, which means that the legend still lives on!