Why the Russian elite opposes the special operation 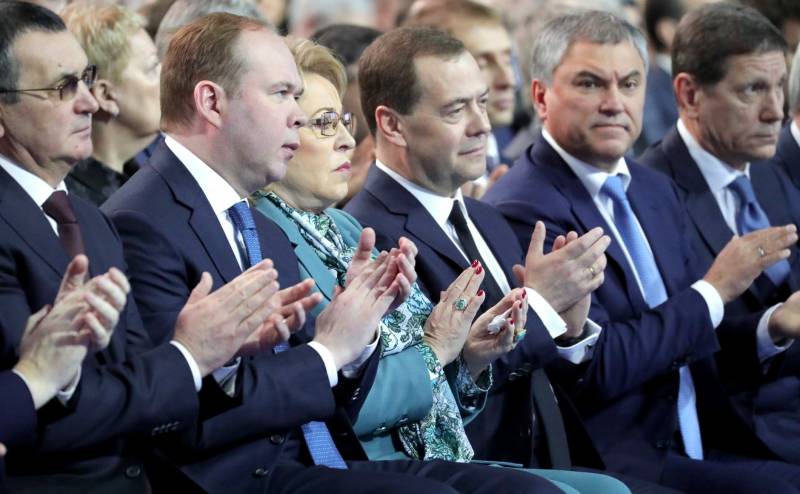 The goals of the special operation are gradually being realized, while somehow inconsistently and uncertainly, they constantly look back at the reaction of the "Western partners", no decisive measures are taken to strike at the decision-making headquarters and the enemy's logistical communications are not destroyed.


For the entire period of the operation, except for the Mariupol pocket, not a single encirclement of the Armed Forces of Ukraine was carried out (although it was already possible to organize five pockets), they are squeezed out of their positions, retain their strength and retreat to pre-prepared lines, where they continue to resist. The strategic turning point in the special operation did not come, the enemy did not lose heart and is even planning a "counteroffensive" on the southern front.

Many are wondering why this is happening and what is holding back the Russian military-political leadership from making a decision to defeat the Armed Forces of Ukraine and aggravate relations with the West, without whose help Ukraine would have been over long ago.

The consensual nature of the Russian elite

It is no secret to anyone that the ruling class, which came on the “privatization” wave of the 90s, and the bureaucracy and intelligentsia serving it, pursuing the line of surrendering state interests and defending Russia’s integration into the Western community, basically retained their positions in power structures. and try to realize their clan interests. For them, Russia is just "this country", and it is not a pity to waste it.

Yes, purges have recently begun in this environment, some of them, such as Chubais and many former deputy prime ministers and top officials of state corporations, have already fled to the West, Mau, the ideologue of liberalism, is under arrest, but such pillars of Russian liberalism as Gref, Kudrin, Siluanov, Nabiullina, remained in their places and continue their destructive activities. For example, the Accounts Chamber, headed by Kudrin, recently proposed to write off $330 billion frozen in the West from the National Welfare Fund. It was with their help that we lost our gold and foreign exchange reserves, and now they are offering to forget about them and give them to the West!

There is another group in the ruling class, headed by the president, who defends the sovereignty of the Russian state and initiated the NVO. It should be noted that the president came to power not on the basis of some powerful popular movement. He ended up there by accident, he was put forward by the then ruling elite, and if they knew where it would lead, they would hardly have taken such a step.

As a result, a consensual nature of power was formed in the ruling class, implying a balance of interests of groups. The elite group of compradors, which placed their stolen assets in the West, united the pro-Western elite groups with all their expert, propaganda and bureaucratic apparatus, is responsible for the economy, finance, foreign trade and relations with the West.

An elite group of "sovereignizers" headed by the president, which united the military, special services and statesmen, is responsible for the sovereignty of Russia and defends the development of the state independent of Western influence. Any attempt to break the consensus threatens to revolt the losing part of the elite.

The elite group of compradors acts as a fifth column in power, deliberately working for the West and leading to the defeat of Russia in the global confrontation. The second elite group is still afraid to touch them and massively remove them from power, this can lead to the collapse of state administration and provoke uncontrollable processes to destroy the state. Compradors are slightly “thinned out” and their activity is limited, without taking drastic measures against them.

The latent confrontation between the two groups lasted quite a long time, and the hidden split between them sharply escalated in 2014 over Crimea and Donbass, the political system could no longer be in a consensus balance. The decisive step was taken by the President, who announced the NWO. It is difficult to say who and how convinced the military-political leadership of the possibility of a blitzkrieg in Ukraine and a quick change in the ruling regime, it was a mistake that led to the Istanbul talks.

Encouraged compradors achieved the humiliation of Russia, she agreed to leave all the occupied territories and be content only with the recognition of the Crimea and Donbass. But the United States and England did not allow the implementation of the deal, besides, the Russian society was categorically against it, and the deal did not take place. The special operation has switched to a sluggish regime, in which there are no strategic victories, and the troops are slowly solving the tasks of liberating the territory.

In the current situation, the compradors did not give up and are convincing the president that Russian society is tired, the economy will not withstand a long war with the West, and it is urgent to negotiate a truce with a freeze on the conflict. They are trying to prove the danger of mobilization and centralization of government, that the people are tired and can get out of obedience, while the army is ready to abandon the front and raise weapon against power. Their goal is to push the country to "Minsk-3" and hand it over to the West with giblets.

"Sovereignizers", on the contrary, defend the need to continue the special operation to the bitter end and achieve the goals set. The West, in turn, shows its readiness for a long confrontation and convinces everyone that Russia got involved in the war with its complete unpreparedness, counting on a failed blitzkrieg, and that now it must look for ways out of this hopelessly lost war as soon as possible.

The confrontation between the two elite groups has escalated into a cold civil war of the elites, and who wins will determine the future of the Russian state and its degree of participation in the inevitable reorganization of the world. In fact, at stake is the question of Russia's sovereignty, whether it is able to defend its identity and independent path of development, or is it ready to disappear as a civilization and dissolve in the Western community.

The Need for Russia's Sovereignization

It should be emphasized that the sovereignty of the state is an absolute value and, in addition to technological, military, economic and political sovereignty, it primarily implies the spiritual (conceptual) sovereignty of a society that reproduces a passionate elite capable of organizing a mental war with the enemy.

The Soviet elite of the 80s did not consider sovereignty an absolute value and sought to integrate into Western civilization, while discrediting Soviet (Russian) civilization. The Russian elite of the 90s set as its main task not the preservation, but the destruction of Russia's sovereignty, and made a lot of progress in this matter. Moreover, in the colonial Constitution adopted then and still in effect, a ban on spiritual sovereignty was imposed (any ideology is prohibited), Russian society was cut off from spiritual development.

In the XNUMXs, first of all, Russian society (and only a part of the elite) came to an understanding of the vital need to restore sovereignty, but this did not become the prevailing idea. The special operation put the question point-blank - without comprehensive sovereignty, Russia as a state and civilization will not survive, for an all-out clash with the West, a sovereign national elite is needed, which does not yet exist. Now, a small elite group headed by the president is trying to implement the national strategy of sovereignty, but without the predominant part of the ruling class, which has set itself the goal of resisting the expansion of the West and developing its civilization, it is impossible to achieve spiritual sovereignty. This idea has already taken hold of the masses, but has not yet been accepted by most of the Russian elite.

Russian society has moved towards understanding the need to defend its sovereignty and gather Russian historical lands, and the main part of the ruling class, experts and officials are stubborn and do not want to become winners in the global battle with the West. The people literally by force on their hands bring them into the winners, but they do not want this victory, they resist and strive to escape. The time has come for the total replacement of the old elite, but there is no counter-elite yet, among the old elite there are only individual representatives with an alternative idea.

The two parts of the ruling class have different fates and different survival strategies. So the intra-elite struggle will inevitably intensify depending on the pace of the special operation and the results achieved. The issue of a possible truce, for which the compradors are fighting so hard in order to achieve political destabilization with a subsequent economic downturn and a surge in protest activity, will become fundamental. They seek to create an atmosphere in which the sovereignty of the country and the mental values ​​of society can be reformatted in the interests of the victorious West. This elite group feels its instability, and the people no longer consider them an elite.

With all this, the Russian leadership gives the West signals that it is not against a truce after the liberation of Donbass, despite the unpopularity of this idea among the masses. Apparently, an attempt to negotiate is not ruled out, although in this case, the denazification and demilitarization of Ukraine will have to be forgotten, moreover, a political crisis will immediately begin in Russia, and there will be no way to “sell” a truce as a victory.

In the current situation, the Russian sovereignty elite is between the possibility of a revolt of the compradors to remove it from power and a revolt of the masses after a lost victory, which will be considered stolen. The goals of the special operation will not be achieved and the sacrifices made will become in vain, and the compradors will receive a trump card for their revenge.

In this situation, neither Russia nor the West achieve their goals, and therefore there can be no talk of any peace in Ukraine. To achieve victory, Russia will have to really reformat the political system and completely clean up the elite. Peace in Ukraine is possible only with an unconditional military victory for Russia or the West, and the results of the NMD will determine not only the fate of Ukraine, but also the fate of Russia and the future world order.