Oleg Nemensky: The Orthodox Church openly raises the question of the reunification of the divided Russian people 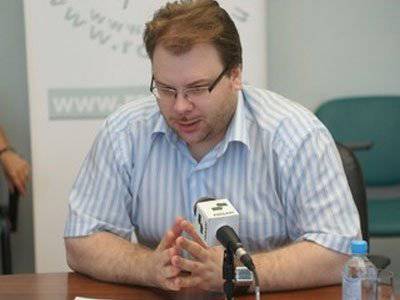 The initiative of Archpriest Vsevolod Chaplin to collect signatures under the "Charter for the reunification of the people of Russia, Ukraine and Belarus" caused a lot of criticism for its alleged unfounded, lack of prospects for a specific application of its results. Yes, probably, it may even seem defiantly naive, because it is clear to anyone that even millions of signatures will not override geopolitical maps and the interests of elites will not change. However, it still seems that the actual role of this action can be quite significant. The Charter open for signatures, subject to its wide public presentation, may well influence the state of affairs in the existing plans for post-Soviet integration.

It is clear that the church initiative is designed to complement the integration steps that Russia is now taking at the state level. What official Russia offers in this regard is fundamentally (and consciously) devoid of any value, identity and ideological components - only economic pragmatism. And, probably, this is correct, reasonably based on the political realities of the CIS. However, the integration project must necessarily have its own identical basis, otherwise it is more likely only cooperation, but not integration. And in these conditions, it is the church that can take responsibility for filling the integration processes. historical, value content. But there is one significant nuance: unlike official Russian projects, the Charter’s integration concept does not imply the unification of different peoples and does not threaten the entire post-Soviet space. It is open to those who wish to join it, but the principle has been set in advance - we are talking about the reunion of one people. And this is its fundamental difference. In fact, an alternative integration model can be seen behind this.

Actually, the integration project of the Charter is no longer post-Soviet, as all the other projects are to one degree or another. It involves integration on other grounds. In the text of the Charter, there is not a word about the space of the former USSR as about any desired integrity, nor about the East Slavic peoples, who for some reason need to stick together. On the contrary, it speaks of the reunification of one people. And this is a very important point, radically separating the concept of reunification, according to this Charter, from the Soviet model of three fraternal peoples, still retaining its ideological force and in fact working only for the division of the common Russian space. Perhaps, for the first time, an integration concept was proclaimed at a large social level, which affirms the all-Russian unity and is based on the demand for the reunification of one people, and not the unification of several. Of course, except for previous statements like "we are all a single Soviet people."

The Charter for the Reunification of Our People de facto postulates for Russians the status of a divided nation, indicating its political fragmentation, equally describing the Russian Federation, Ukraine and Belarus as "the state of our people." However, she refers to the rule of the constitutions of all three states, according to which it is the people who are the source of power. For big politics, this wording is still almost not permissible, except in private articles and statements, as well as in rare statements by the President of Belarus, Alexander Lukashenko. The reunification of the Russian states - so far there is no such topic in Russian political discourse.

But it is noteworthy that this nation is not indicated in any way in the Charter; it is, as it were, a people without a clear identity. And the country is not named. In my opinion, this is the only weak point in its text. It is clear that it is difficult to call it Russian (all-Russian) for reasons of post-Soviet political correctness and real domination of anti-Russian models in the public consciousness, but it was still possible to pronounce the word "Rus" - people of very different views in all three states perceive it quite normally. The reunification of Russia - this formula should not only be implied, it should have been voiced.

It is very good that this initiative comes from the church. The Russian Orthodox Church is the only legal institution of our society that officially considers itself Russian (and precisely all-Russian) and has an all-Russian, now cross-border territory of its activities. The Russian church keeps the image of united Russia, preserves its identity. Therefore, it is up to her to raise the issue of reuniting the common space, gathering people.

And yes, it is unlikely that this initiative can be successful in itself. Such initiatives will require a lot more. It is no coincidence that, from a formal point of view, it is difficult to call it an initiative of the highest ecclesiastical leadership — so far it is rather a private action. Obviously, the steps of a higher and more official level, we will see later. However, it will in any case have its positive effect. It is important for Orthodox Russian people to see that the church is concerned about the reunification of the Russian land. In addition, it awakens social thought, again brings the topic of an all-Russian view to the forefront of the information field. Only in this way can we break the lingering dominance of the old (Soviet) and frankly Russophobic norms of political correctness in this matter.

This also lays a completely different form of Russian statehood compared to the dominant one: there is no longer any talk about ethnic federalism that we are used to, which, creating a regional ethnocracy, inevitably leads to new separatist conflicts and political disintegration. On the contrary, the Charter indicates the norm of our constitutions about a single people as the bearer of state power. Behind this is a model of national statehood, Russian political self-determination. Like the belief in his will for reunification and government activities.

A broad public presentation of the new logic of integration is of great importance and will undoubtedly influence the moods both in society and in political elites. After all, the most important problem of all plans for post-Soviet integration is that it is impossible to unite on old bases. It is simply pointless - the Soviet Union did not collapse accidentally, it worked in his device social and political mechanisms that operated in that direction. The forms of the post-Soviet states do not imply a single people in the Russian land, on the contrary, they reflect ideologies that divide this land. And the simple reunification of the three states in the new union will not be the reunification of one people. Rather, on the contrary, separatist ideologies will spur development.

Unfortunately, it is too early for us to unite, as there is still no new (and at the same time more historical) ideology of association, which would be widely known and recognized by the people. It can be subtracted in a number of texts of modern thinkers, but it is not in the public consciousness, it is not in official statements. But the initiative of the Charter is important precisely because it implies a new step in its formation and public presentation. The step is all the more significant because it is sanctified by the authority of the Russian Church.