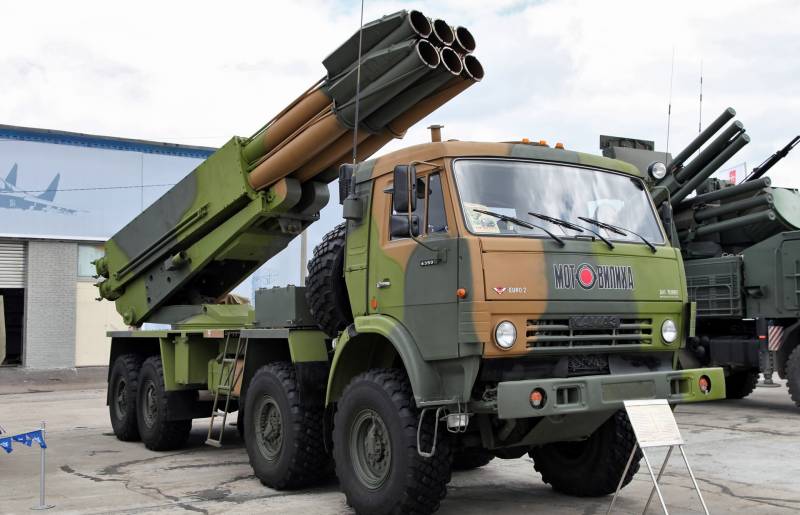 Chimera is not the only one

One of the main advantages of foreign wheeled MLRS HIMARS is high mobility and stealth. A three-axle 300-horsepower FMTV truck with a folded launcher is not much different from a conventional military vehicle. This allows HIMARS to remain unnoticed for aerial reconnaissance and, due to its high power density, quickly leave the missile launch zone. The average speed of movement on public roads by the car is similar to the domestic MLRS "Grad". If we add to this the high flight speed, range and accuracy, then each HIMARS is a rather dangerous, albeit overestimated, enemy. Russian anti-aircraft gunners have already learned how to hit missiles, despite the low effective target dispersion area - no more than 0,1. Evil tongues in propaganda channels have already managed to christen imported equipment that has no analogues in the world, especially in Russia. But it's not. Among domestic developments, one can find at least a couple of machines capable of fighting imported impostors in terms of a combination of parameters.

Let's start with a system that has already been put into service - MLRS 9A53 Uragan-1M. Before the special operation, few people remembered this car, but the artificial excitement around HIMARS and the tracked MLRS makes us pay special attention to this unique development. The RZSO is based on the MZKT-7930 Astrolog four-axle chassis, which at one time caused a lot of controversy. About 8-9 years ago, when the union of Belarus and Russia was not so unambiguous, the question of replacing the Minsk chassis with the Bryansk Voshchina-1 was considered. On the latter, by the way, domestic air defense systems are based, for example, the S-350 Vityaz and S-400 Triumph. Critics had a lot of arguments in favor of the domestic chassis. For example, the Mazov cabin is plastic, which makes it impossible to armor, unlike the steel BAZ. This is now of particular relevance, given the density and accuracy of artillery fire in Ukraine. By the way, all HIMARS are well armored. Back in the 2010s, the Bryansk Automobile Plant developed two chassis with armored cabs - BAZ-6910 and BAZ-6306. The armor corresponded to the highest 6a protection class, but in the end turned out to be unclaimed. 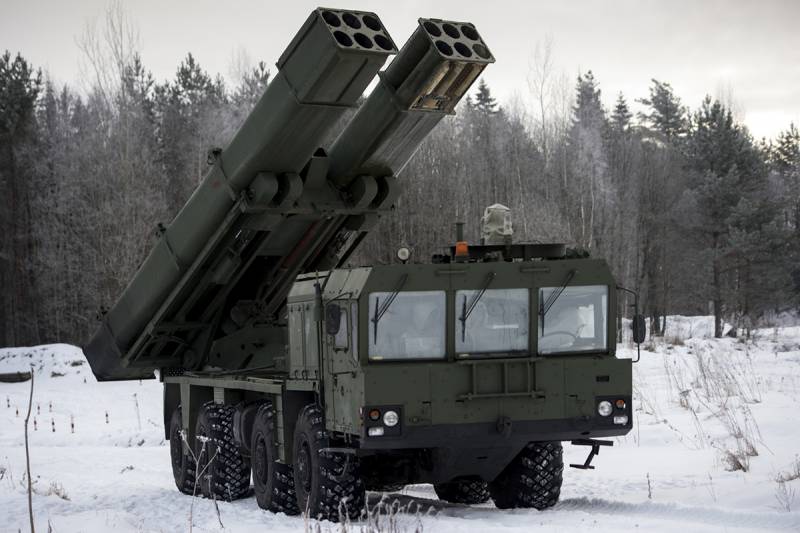 "Hurricane-1M" in the 300-mm version. Source: wikipedia.org
Uragan-1M on the Minsk chassis (which is unified with the Iskander-M rocket launcher) was put into service in 2016 and can be considered the ideological follower of the Uragan based on the ZIL-135LM with its bizarre transmission. Recall that the predecessor has two carburetor motors, each of which drives the left and right row of wheels. The new RZSO has a 500-horsepower diesel engine that drives all wheels through the usual cross-axle differentials. At the same time, Uragan-1M can become a replacement for the more powerful Smerch system equipped with a 300-mm launcher. In terms of size, the cars have full parity - the length is more than 12,5 meters, the height and width are about 3 meters. But further improvements begin, allowing us to call 1M a new generation of technology. At least in Russia. The point is the bicaliber nature of the RZSO - depending on the tasks, 220-mm and 300-mm guides can be installed on the machine. In the first case, there are 30 "pipes" at once, in the second - 12. Therefore, it would be more accurate to call Uragan-1M a competitor not to the wheeled HIMARS, but to the tracked MLRS M270, equipped with 12 227-mm caliber guides. In the "light" version, "Hurricane-1M" creates a fire density similar to MLRS in 0,0014 kg / m2 (for the American system - 0,00135 kg / m2). At the same time, the Russian machine sends missiles to the target 8 seconds faster. With 220 mm MLRS modules, it can hit targets at a distance of 45 km. The main bonus of the new "Hurricane" is a batch reload, which allows you to equip missiles in just five minutes. For this, a special transport-loading machine or TZM is used. Some commentators point out that the American MLRS do not have TZM at all, referring to the standard loading ramp for self-assembly of the missile package. Of course, this somewhat expands the autonomy, but is not a fundamental advantage. Moreover, the HIMARS and M172 have an ammunition transporter. The domestic development does not provide for crane equipment on the MLRS chassis, but the TZM is capable of changing missiles not separately, but as part of transport and launch containers. This allows you to achieve a recharge time comparable to imported samples. 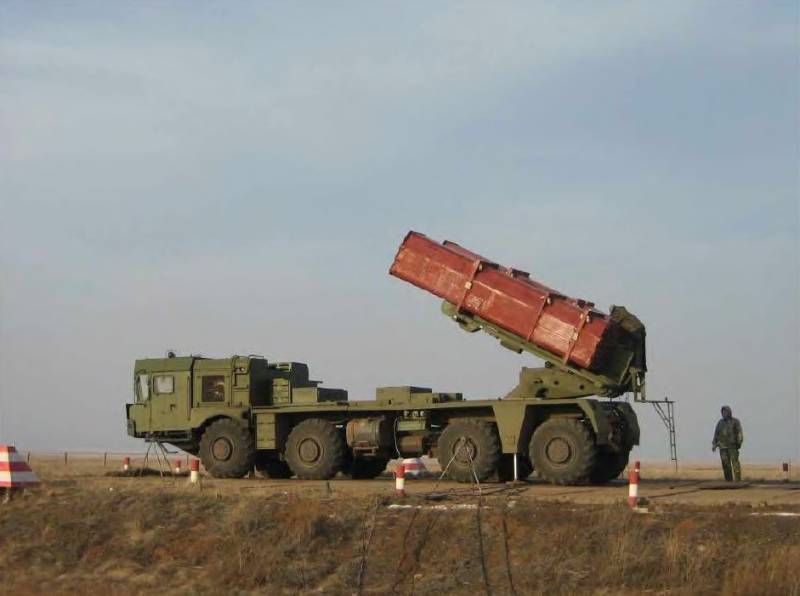 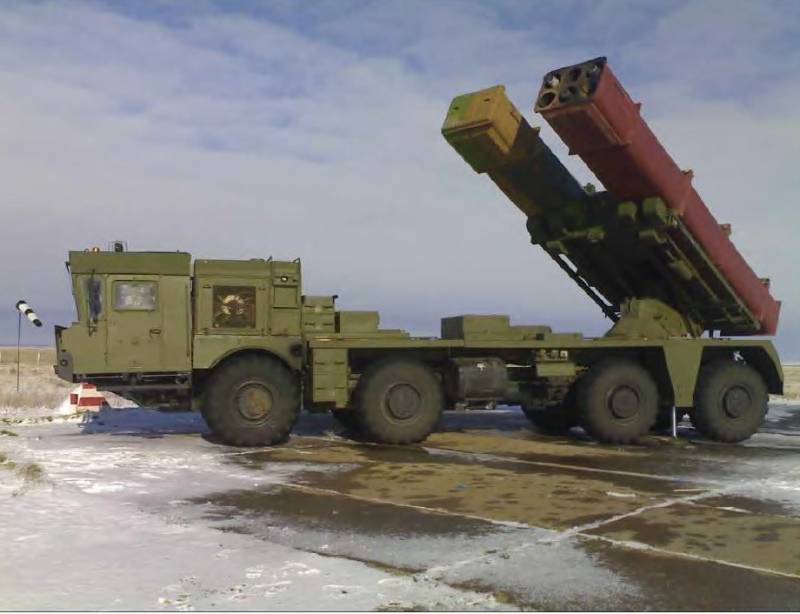 Above "Hurricane-1M" with 220-mm modules, below - with 300-mm. Source: S. V. Gurov
In the 300-mm version, the machine accommodates two unified 9Ya295 transport and launch containers with six guides each, which will be discussed later. A similar reloading scheme is implemented in vehicles based on the KAMAZ Mustang chassis.

To accommodate six 300-mm missile guides from the Tornado-S / Smerch complex, the KamAZ-6350 8x8 chassis was chosen. The result was a relatively compact machine with a length of 11,2 m, a full overall width of 2,5 m and a height of 3,1 m. The gross weight of 23,6 tons is almost half that of the Uragan-1M. This allows the MLRS to pass through bridges with a carrying capacity of up to 25 tons. In 2007, the 9A52-4 Smerch machine was shown to the public for the first time. It is noteworthy that the MLRS appeared to the world at the International Aviation and Space Salon MAKS-2007. Six 300-m missiles are placed in the unified container 9Ya95 mentioned above, which makes it possible to significantly speed up reloading. The dimensions of the sealed container are 7512x1130x996mm, the curb weight is 6,2 tons, the empty one is 1,42 tons. Lightweight "Smerch" on the KAMAZ chassis allows you to more effectively deal with enemy counter-battery systems and distribute the MLRS more evenly along the front. A compact car is much easier to disguise, and on the march, a four-axle KamAZ with an awning is easy to confuse with the equipment of the engineering troops. The machine has a high degree of automation of all processes, a crew of 2 people, and a full package of missiles goes to the target in no more than 20 seconds. Unfortunately, at that time no one was interested in the MLRS of the Perm Motovilikha Plants, and the car remained experimental. 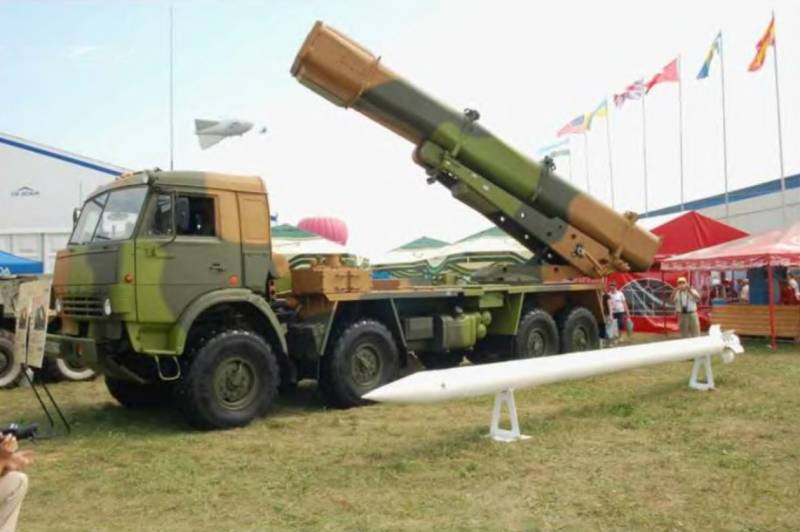 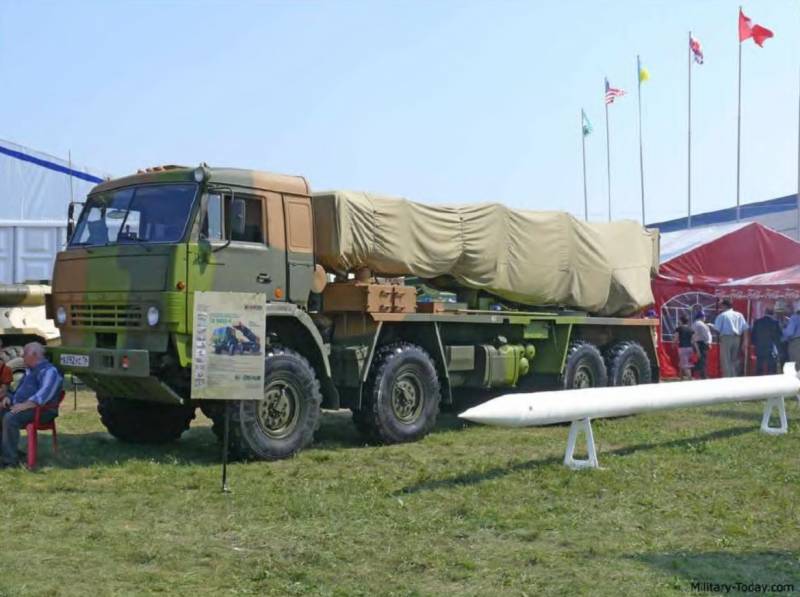 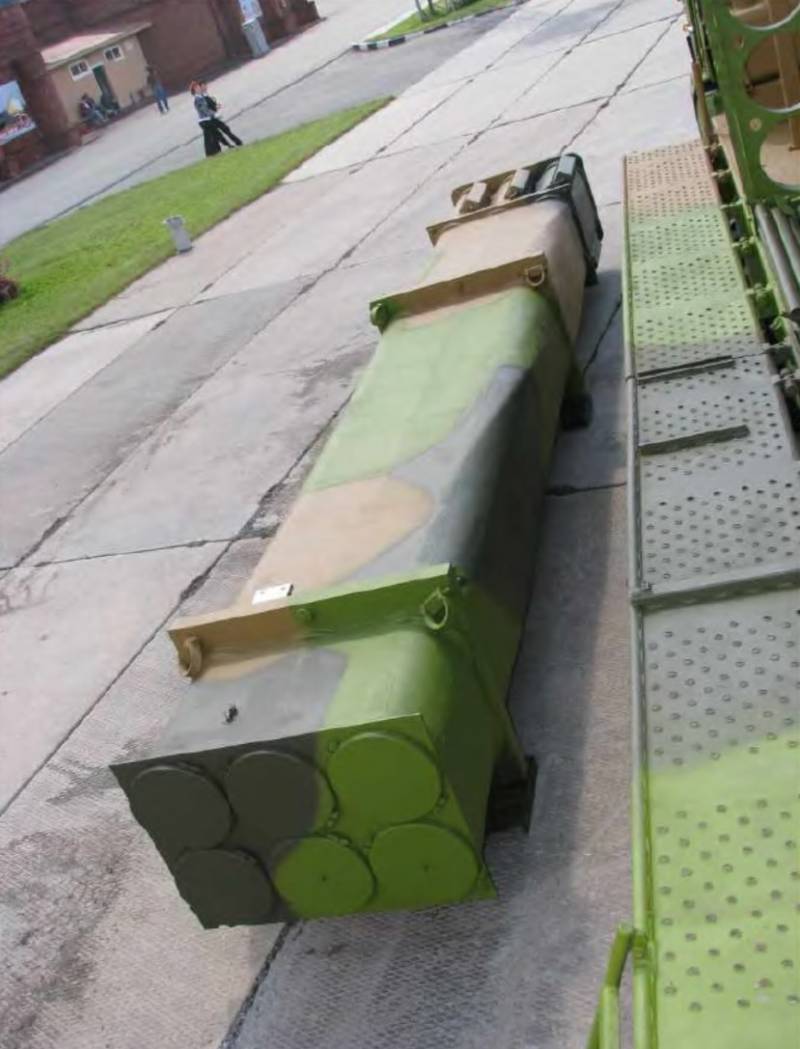 Early MLRS based on KamAZ. Below is a sealed transport and launch container 9Ya295. Source: S. V. Gurov
In 2009, they showed a modernized version of the 300-mm MLRS, which received the name 9A54-2 "Kama". The differences are minimal - instead of a sealed container for missiles, an open MZ-196 was installed. It is somewhat wider and much heavier - in curb condition 7,3 tons, empty - 2,5 tons. In terms of performance, the leaky container does not differ from its predecessor. It similarly guarantees the safety of missiles in the temperature range from -40 to +50 degrees Celsius, humidity up to 98% and wind speed up to 20 m/s. MLRS "Kama" was shown for the first time in Nizhny Tagil at the REA-2009 exhibition complete with a transport-loading vehicle. 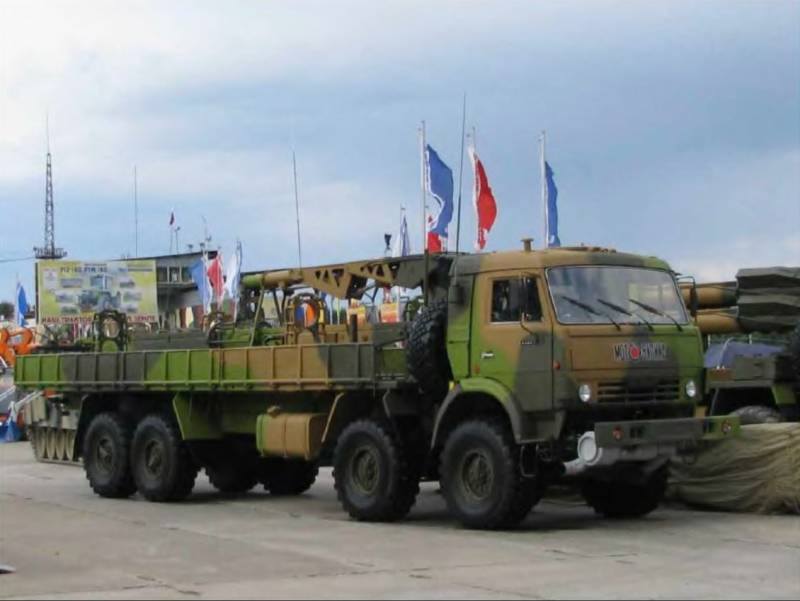 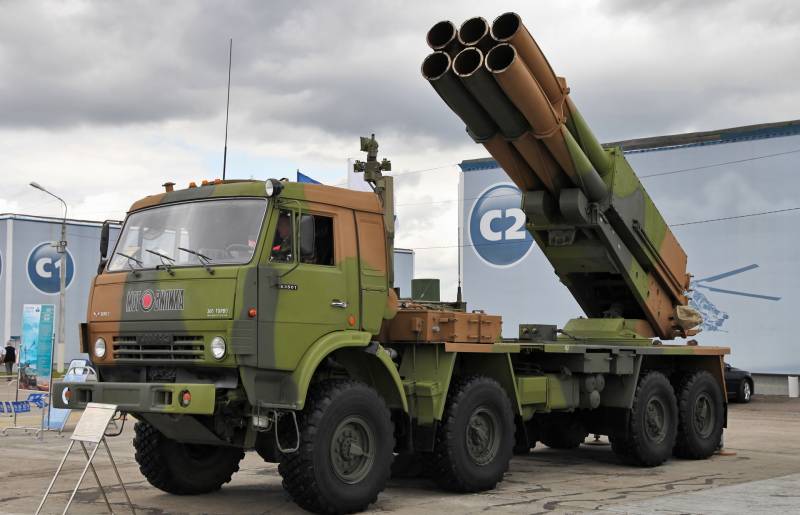 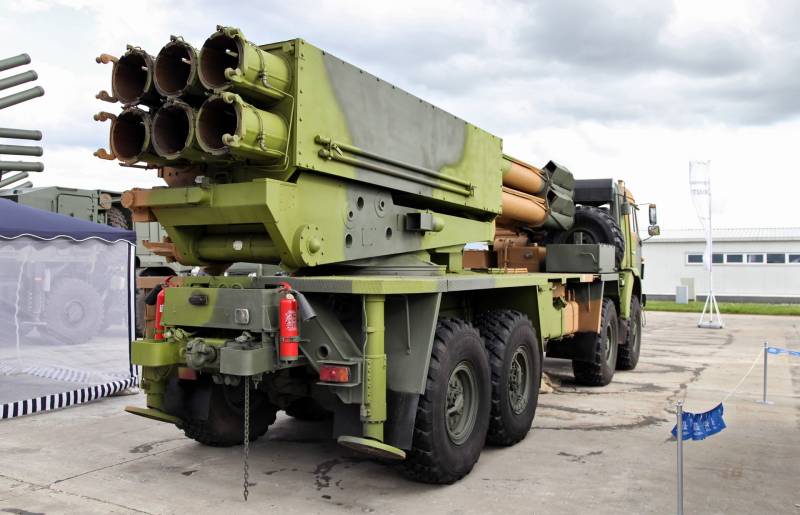 Late version of the MLRS 9A52-4 "Kama" with leaky guide packages. Source: wikipedia.org
MLRS based on KamAZ can use the entire range of available 300-mm rockets, which means that the range can reach 90 km. Some promising ammunition with dual-mode engines can reach the enemy at a distance of 100 km or more.

All the above systems are good. And long-range, and self-aiming, and fast reloading, only there are no “Kama” in the troops at all, and “Hurricane-1M” is found in single copies.