October 15 2012
9
On the southern borders of the large Russian Empire, it has been restless since Central Asia became part of the Russian state. And this was due to the fact that the territories inhabited by wild Afghan tribes became the scene of a clash of interests between England and Russia.

The rivalry between Britain and Russia for Asian domination in the XIX - early XX-th included in history under the name "Big Game", it did not end in the XX century. With the adoption of independence by Afghanistan, the influence of England in this region decreased, however, contradictions within the country itself intensified.

In 1978, as a result of the revolution, the People’s Democratic Party came to power in Afghanistan, proclaiming a republic and taking a course toward reforming the country. This led to an escalation of the conflict between the new leadership and the Islamic opposition.

Of course, everything that happened in Afghanistan could not help but trouble the Soviet leadership, and in order to reduce the increasing destabilization in this region, it was decided to introduce Soviet troops into Afghanistan.

So began the Soviet-Afghan war. 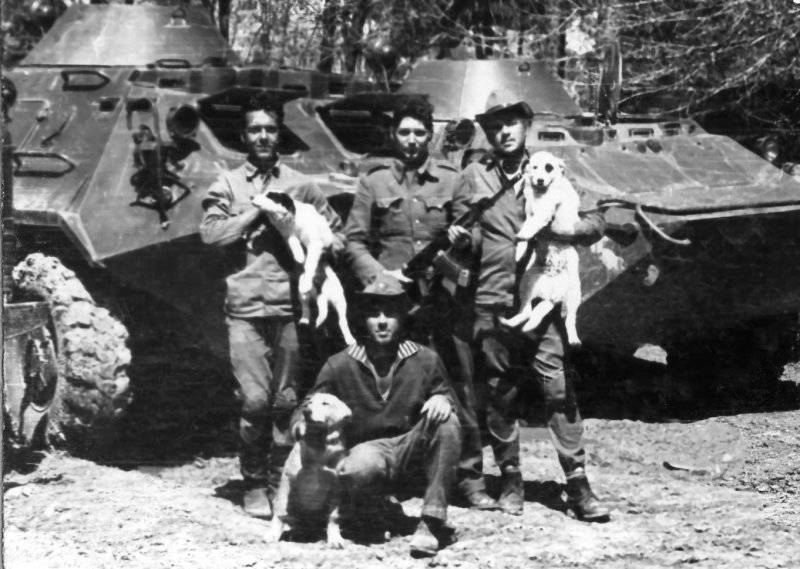 Soldiers of military service from the Border Troops

The fighting in Afghanistan was carried out not just by the army, but the KGB special forces units and internal and border troops were involved.

I would like to tell you about the actions of the border guards in this article.

For the border troops of the USSR on the Afghan territory, a special zone of responsibility was established with a depth of 200 kilometers at the junction of three borders - the USSR, the PRC and Afghanistan. In fact, these were the border areas of the Afghan provinces adjacent to the USSR.

At the same time, the border guard service was conducted from two sides of the state border, since practically all Afghan border posts were routed by opposition militants (who rightly considered the USSR as an ally of the PDPA).

In the spring of 1980, the first major military operation was conducted under the leadership of Colonel VN, Chief of Staff of the Central Asian Border District (SAPO). Kharicheva. The essence of the operation was the stripping of the rebels of the border strip of the northern part of the mountain Badakhshan (the operation entered into a military history called "Mountain-80"). Units of the Moscow, Pyanj, and Khorog border detachments on 30-ti BTR and BMP, under the cover of X-NUMX Mi-11 helicopters, together with the paratroopers, cleared several areas and eliminated militant groups, led by a certain A. Vakhoba. The stripping area reached 8 kilometers over more than 10 kilometers: all villages in the area of ​​this zone were cleared of the Mujahideen. Upon completion of the operation, new border garrisons were set up in some localities.

Later, in just one year, such significant operations as Balamurgab, Winter 80, Spring 80, Summer 80, Autumn 80, Ruslan and some others were carried out.

In order to cover the borders of Afghanistan with China and Pakistan, garrison units were deployed from Murgab to the Eastern Border District. This helped to filter the caravan corridor between states, with the help of which militants often transported weapon or ammunition.
By 1981, the Soviet troops managed to gain a foothold in a number of settlements: Kalai-Kouf, Rustaq, Hairatan, Sher Khan, Haun, Yangikala, Chahi-Ab, Nusai, as well as in the Small Afghan Pamir. Covering important vital facilities in the villages, controlling the routes of possible movement of militants and cargo with weapons, the border guards maintained close ties with the Afghan KhAD (AGSA) and tsarandoy (the Afghan secret services and the police, respectively), and also helped the Afghan border guards with food, medicine and ammunition.

During the period from 1981 to 1986, the Soviet border units conducted more than 800 operations, some of which were coordinated with other troops, including parts of the armed forces of Afghanistan. Moreover, in the mountainous parts of this country, due to the specifics of the mountainous area, convenient for the subversive activities of the Mujahideen, military actions were conducted almost constantly. Typical examples of military operations in the high-mountain part of Afghanistan include the Marmol operation in January-February, 1984, the Tashkurgan operation, 1985, conducted under the leadership of the new chief of troops of the KSAP, Major General V.I. Shlyakhtina.

In the spring of 1986, units of the Eastern Border District, together with a separate 860 motorized rifle regiment, conducted one of the major operations for the entire period of hostilities outside the territories belonging to the border guard area of ​​responsibility - the Varduj Valley. The result of the operation was the liberation from the militants of a vast territory, and the free road was Paharak-Hasravi. In parallel with this operation, the special units of the frontier guards carried out purposeful ideological work among the fluctuating groups of mojaheds, and this strategy yielded certain results: only for 1985 a year, about two thousand people switched to the side of the Afghan government, of which five national battalions were formed.

After some relative lull in 1986, the Soviet border guards were forced to re-organize several serious operations (for example, on October 2, the attack on the long-fledging Imamsakhib group on the city of Pyanj was broken off).

In the third period of the hostilities in Afghanistan (1988-1989), the border guards helped to ensure the safe withdrawal of the 40 Army from the country.
Also during this time, the special units of the border troops conducted 50 armed operations, about two and a half thousand raids and sorties, put out about four thousand ambushes.

In the ten years of fighting in Afghanistan, tens of thousands of border guards have passed. At least, the fact that not one border guard was captured by the Mujahideen during all these years, the 518 people of them died directly in the battle during special operations speaks about the dedication and high morale of these people.

These and other names of the border guards who selflessly served for the good of the Motherland and defended the Soviet state from the attacks of the Asian barbarians, will forever be remembered by grateful descendants.
The war in the first person. Afghanistan (Belarus) 2011 year

The press center of the State Border Committee prepared the documentary film “The war from the first person” for the Memorial Day of Soldiers-Internationalists.
The film tells about the tasks that solved the units of the border troops in Afghanistan.

The main and only storytellers are the direct participants of those events. Border activities in Afghanistan have been banned for a long time and deliberately diverted from public attention. Today, information was opened in an open format that border guard units were the first to enter Afghanistan and the last to leave ...

This is the first open look at closed topics, at what has always remained behind the scenes. The time has come to pay tribute to those guys who honorably fulfilled their tasks in defense of the USSR state border.