Hot October for the post-Soviet space: parliamentary elections in Georgia, Lithuania and Ukraine 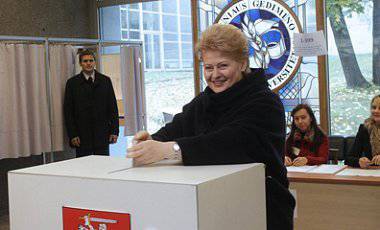 Note: the material was prepared before the announcement of the preliminary results of the elections in Lithuania

October 2012 of the year is a truly hot month on the territory of the former Soviet Union. Immediately in the three former Soviet Republics, elections of deputies of parliaments are scheduled: elections in Georgia, as we know, have already taken place, in Lithuania at the time of the preparation of the material, voting for elections to the Seym is underway, Ukrainian citizens will show their preferences for one or another party in late October.

If you try to draw certain parallels in the indicated states that are more than 20 years de jure independent, a fairly obvious tendency can be traced: the current government is losing elections or seriously losing ground compared to previous polls. So it was in Georgia in early October, so probably (at least, sociological polls are talking about it) will be in Lithuania and Ukraine.

According to surveys conducted by the Lithuanian Courier, the first places after the announcement of the election results in this Baltic country can be left-wing and center-left parties. In particular, the first three places on the basis of parliamentary elections are given to such political forces as the Social Democratic Party of Lithuania (Social Democratic Party of Lithuania), the Labor Party, as well as Order and Justice. Today, the SDPL faction in the Lithuanian Diet has 25 seats from 141 (after the elections of 2004, they were 20). In the new Seimas, most likely, the SDPL may receive more mandates, as evidenced by opinion polls.

The Lithuanian elections are one of their nuances reminiscent of the elections in Georgia that recently ended in opposition triumph. The fact is that one of the left-centrist parties here is headed by a very wealthy man - Viktor Uspaskich. Today, his property is valued at more than 50 million dollars. Yes, not billions of Bidzina Ivanishvili, of course, but ... It is noteworthy that not so long ago, Viktor Uspaskich, like Bidzina Ivanishvili, turned into a disgraced oligarch-politician.

Uspaskich in Lithuania was accused of concealing income and tax evasion. It makes one think that such accusations to Viktor Uspaskich were brought at the very moment when he decided to visit Moscow in his business affairs. Such a trip and intra-Lithuanian accusations of the machinations of Uspaskys in the financial field could put an end to his political career. The fact is that the Labor Party won the first place in the 2004 elections of the year, gaining more than 27% of the votes of Lithuanian voters, however, the current authorities did not like this situation, which resulted in the “democratic” accusations of Uspaskichs of tax evasion and “secret connections with Moscow. As a result, in the elections to the Seimas 2008 of the Year, the Labor Party showed much less impressive results - the strategy of the usual “democratic” black PR worked for the current Lithuanian authorities in the right direction. But today they say that the Labor Party has an excellent chance to win a sufficient number of seats in the Lithuanian Sejm and celebrate a kind of revenge. Moreover, the Labor Party and the SDPL can create a left-wing parliamentary bloc and “seize” the Lithuanian Sejm, if, of course, the democratic authorities of the country that are oriented exclusively to the West do not have time to put sticks into the wheels of their opponents.

If the political success of Uspaskich and his political power in Lithuania is witnessed, then we can clearly speak about a very specific tendency traced in elections in countries that were once Soviet Republics: dominated by slogans aimed at solving social problems and restoring partnerships with The Russian Federation, are people who, one way or another, are connected with Russia. Bidzina Ivanishvili made a fortune on the basis of the Russian mining industry. Victor Uspaskikh was born in the Arkhangelsk region and in Lithuania he was initially engaged in the construction of a gas transmission system, and then he discovered a company for the production of agricultural products.

In general, both Uspaskichsky and Ivanishvili are not poor people, people definitely related to Russia. And if Ivanishvili already celebrates his victory in parliamentary elections and distributes ministerial portfolios, then Viktor Uspaskikh in Lithuania also has a chance for tangible success (not as deafening as the Georgian Dream in Georgia, but also not unimportant), if opinion polls conducted in this country, they are close to general electoral moods.

It is worth recalling that in the Lithuanian Seym there is an 141 chair, and in order to take several deputy seats, it is necessary to overcome the 5% barrier.

At the level of passing in Lithuania, the Liberal Movement balances, which can dial from 5 to 8% of the vote. It is noteworthy that the Lithuanian liberals see the development of Lithuania exclusively in the movement along the Western course - close integration with the EU, bringing liberal European values ​​into the traditional Lithuanian culture (with same-sex marriages, parades far from workers and peasants), however, like the winners of the 2008 sample elections of the year - Lithuanian Christian Democrats - the Lithuanian Liberal Movement has virtually no chance of serious success. They, certainly, can get to the Diet, but already, most likely, as minority rights. According to a sociological poll conducted by the Baltijos tyrimai agency in the second half of September, Christian Democrats can get no more than 8% of votes in elections. Compared with the previous vote (2008 of the year), when the same party, integrated with the so-called "Union of the Fatherland" received 45 seats in the Seimas of the Republic, this can be considered a real failure.

In general, the current authorities, apparently, may lose parliamentary weight, which clearly indicates that the policies of these authorities are less and less impressive for Lithuanian citizens. One can talk endlessly about European integration, but in such conditions, when the European Union itself goes over to use the printing press frankly to delay the default of some debtor states, hoping that Lithuanian economic "successes" will be overwhelmingly welcome in Brussels - a clear mistake. The time is gone when the main base for getting votes was a frankly pro-Western vector. The time is running out when, on the mere words about the "intrigues" of Russia and its "imperial" ambitions, one could enter the parliament on a white horse and in a laurel wreath. People began to realize that their well-being practically does not depend in any way on the degree of involvement of the country in which they live in European financial life. The West has received from the same Lithuania what it has always wanted - separation from Russia with the help of promises of golden mountains in the form of numerous loans, patting on the shoulder in terms of “one year” democratic aspirations in the post-Soviet republics. But today, the approvals for the same Lithuanians are nice, but you will not be fed up with them, you cannot receive affordable fuel and electricity from them, unfortunately for Vilnius, too. So, Lithuanian voters have to make a new choice, which, at least, makes it possible to adjust the political and economic course.

In this regard, we should expect certain political changes in our other neighbors. Speech about Ukraine. If we consider that in the parliamentary elections of 2007, the victory was celebrated by Viktor Yanukovych’s party, which gained more than 34% of votes, today opinion polls in Ukraine show that the Party of Regions can significantly lose its position. If the parliamentary elections in Ukraine were held today, the ruling party could receive no more than 22% of votes. In other words, minus 12% over 5 years. This eloquently testifies to the fact that in Ukraine the voters are also dissatisfied with the policy pursued by the current authorities. With a decrease in the standard of living over the past few years, the current president didn’t really decide in which direction the political and economic vector of Ukraine was aimed. There are endless conversations about European integration, a reluctance to join the Customs Union with Kazakhstan, Belarus and Russia is demonstrated, but at the same time, Yanukovych continues to talk about some economic preferences from his large eastern neighbor. The President of Ukraine is occupied by a half position, which does not provide a serious opportunity for constructive dialogue. This obviously worries those Ukrainian citizens who are wholly and completely for the continuation of rapprochement with Brussels, and those who are fighting for economic integration with CIS partners. It turns out that the “Party of Regions” has not justified the hopes of either one or the other. Will she have time to find a way out in the next couple of weeks - the question is ...

As a result, it is worth noting that the October elections in the post-Soviet space can underline the fact that the people of Georgia, Lithuania and Ukraine are waiting for political and economic changes, and for this they have already voted or are ready to vote for the forces opposing the current authorities.