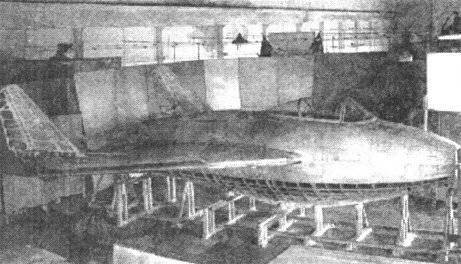 The names of the Soviet aircraft designers - developers of WWII fighters since the time of the war are widely known. However, in their glorious galaxy, unfortunately, they do not include O.K. Antonov, who during the war was the deputy Yakovlev and made a significant contribution to the improvement of the Yak fighter. Since then, a special attitude to fighters, a deep understanding of the development dialectic of this type of aircraft have become an important feature of the creative portrait of Antonov.

This is probably why, when in the spring of 1947, the main design work on the An-2 was completed, and all engineers of the experienced design bureau could remain without business, OK Antonov decided to create a fighter. The Design Bureau, on its own initiative, developed a project for an easy interceptor, which was distinguished by moderate conservatism and absorbed the richest experience of the designer of times of war. The overall layout of the car repeated the German Heinkel He 162 Salamander. Apparently, Antonov was impressed by the elegance and rationality with which this aircraft was created.

Oleg Konstantinovich, thirty years later, recalled this work as follows: “Then there were no good jet engines. There was a captured "Yumo" (the German Jumo 004 engine, mass-produced in the USSR under the designation RD-10), developing a relatively small thrust (total 840 kgf). In this regard, to reduce the loss of thrust, we have developed a project with an upper engine placement. ” Among the features of the new fighter: high firepower, as well as uncommon for domestic structures, the convenience of the pilot (for example, the entrance doors were made according to the type of "Air Cobra"). This development, of course, did not look as avant-garde as, for example, the MiG-15, but, like the German counterpart, fully responded to its purpose — air defense of ground troops deployed at the front line. The direct wing in these conditions provided the best take-off and landing characteristics, the form of the fuselage did not allow to suck in the ground intake, small objects from the surface of the runway, and placing the engine in the nacelle minimized the length of the air channels and, consequently, the loss of thrust.

Probably, the OKB-153 initiative in Moscow did not go unnoticed, and already on 16 on April 1947, the NCAP issued the following order:

"The chief designer of the OKB-153 comrade Antonov,
Director of the plant №153 comrade Lisitsyn

The requirement to develop a new fighter "flying wing" is explained by a peculiar fashion at that time for unusual aerodynamic configurations of combat aircraft.

Being under the significant influence of the German fighter-bombers manufactured by the type of flying wing of the companies Gotha and Horten (though they did not have time to enter the troops), as well as tailless Messershmitt Me-163 Komet (used in 1944-1945 years against the "fortresses" of the allies), the Americans with the participation of interned German designers in the late 1940-ies. launched an extensive program for the development of aircraft for various purposes with the implementation of innovative schemes. So, for example, several original fighters were designed at the same time: Vought F7U Cutlass - tailless with swept wing (first flight 29 of September 1948), Convair XF-92 - tailless XXUMX (September 18 of 1948) and Douglas FXNXXXX to the flying wing (4 January 23g.). By that time, an experimental tailless jet De Heviland DH-1951 had already been created in England (the first flight of 108 in May of 15). In addition, if we recall that the most modern bombers of the time - the American Nortrop YB-1946 (October 49 21) and the English Avro 1947 Vulkan (August 698 30) - were almost a “clean” flying wing, then the USSR’s desire to keep up from potential opponents it becomes clear.

The task of creating such a fighter in the Soviet Union was extremely difficult. The main German developments and leading experts on the "flying wing" aircraft were in the US occupation zone. Despite this, Antonov’s specialists bravely set to work that was carried out during 1947-1948. The preliminary layout and general view of the aircraft, which received the cipher "M" ("Masha"), were probably developed personally by Oleg Konstantinovich Antonov. The leading designers on this topic were appointed A. Batumov. and Dominikovsky V.A., leading in construction - Yegorychev I.I.

The preliminary appearance of the fighter "M" strikes with the grace of external forms and surprises with its closeness to the concepts of the fighters of the present time. For “Masha”, as well as for Su-27, an integral arrangement is characteristic, which provides for minimal aerodynamic drag at maximum internal volumes. The “M” project, like the F-16XL, YF-22 and YF-23 fighters, has a low load on the planned projection area, which guarantees high maneuverability during air combat, excellent takeoff and landing characteristics and a significant practical ceiling. Finally, in the “Masha” project, two engines, mandatory for any fighter created recently, were located close enough to the axis of symmetry so that if one of them fails, there are no significant turning points, but they are sufficiently far apart from each other to provide the necessary combat survivability and reduced total thrust losses (this was the case on the F-111 and MiG-25). The nose section of the fuselage, judging by the layout, allowed for the deployment in the future of a sufficiently powerful radar station, which would transform the aircraft into an all-weather interceptor. Given the above advantages, we can assume that when adopting the fighter "M", it was expected to have an interesting and long flight life. 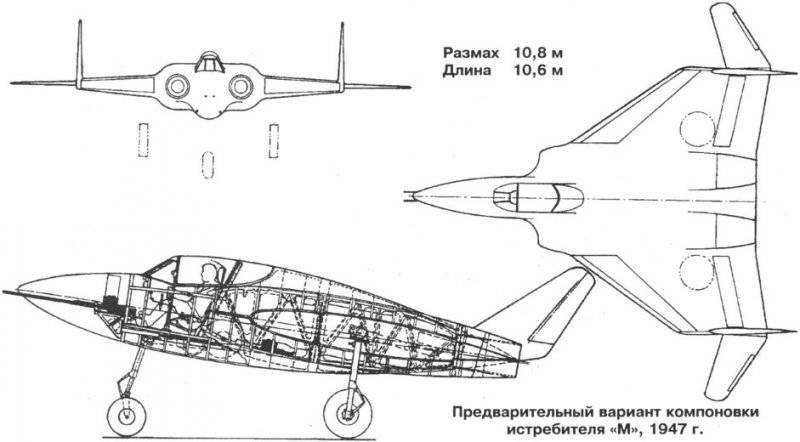 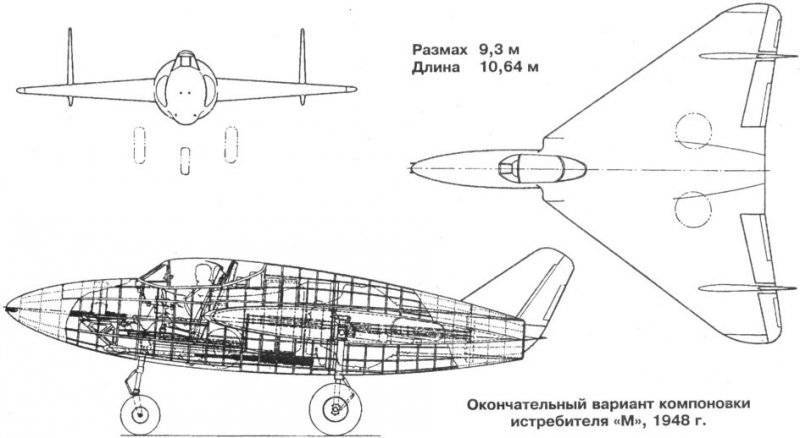 However, the project in this form did not last long. Above came the team to reorient on the use of a new powerful engine with a RD-45 centrifugal compressor with 2270 thrust, yesN (license version of Rolls-Royce RB.41 Nene made in England, later renamed BK-1, thrust increased to 2700 daN). Under this engine, interceptors have already been created in the P.O. Sukhoi, S.A. Lavochkina and A.I. Mikoyan.

The engine of such large dimensions could be installed only in the fuselage, so the latter was slightly increased. The overall aerodynamic layout of this version of the "M" would be more correctly considered tailless. At the same time, aerodynamic surfaces with a reverse sweep on the wing tips, provided for in the first version, were replaced with ordinary elevons, and the area and wing span were increased accordingly. The reason, most likely, was the low critical speed of the flutter of these surfaces of large elongation. Due to the increased air flow through the engine, the side air intakes were finalized. Also considered a variant with a front air intake. The project has not changed for the rest.

The aerodynamic model "Masha" was blown through at the Central Aero-Hydrodynamic Institute. The most important task of the test was to check the controllability and stability of the unusual aircraft. As the planned program was carried out to Novosibirsk from Moscow, encrypted messages were sent: “Masha walks well”. In addition, in winter 1948, in the Experimental Design Bureau Zakharov Yu.V. and Trunchenkov N.S. built a flying glider model "Masha" in scale 1: 10. The model was launched into the air with the help of a rail. The model flew quite satisfactorily. But it was impossible to verify the dynamic characteristics of the experimental M-plane on all fighter-specific flight modes. Therefore, in the Antonov Design Bureau began the construction of a full-scale flying glider-layout of the fighter, which received the designation E-153.

The main construction material of the E-153 was wood. The device had a distinctive feature: the E-153 not only repeated the contours of the experimental fighter, but was structurally similar, that is, it performed the functions of a wooden model, on which the aircraft’s three-dimensional layout was tested, equipment and systems were linked. The E-153 was equipped with a chassis carriage dropped after take-off after the towing vehicle, instrumentation necessary for the planned flight, and a landing ski made integral with the fuselage. Test pilot appointed Gallay M.L.

However, in July 1948 of the year, literally on the eve of the start of the flight, one of the turns characteristic of the planned economy occurred: all work on the experimental fighter "M" was stopped by order of the NKAP. Perhaps the presence of La-15, MiG-15 and Yak-23 was considered sufficient to provide the necessary defense capability of the country. At the same time, the An-2 test was coming to an end, which had to be urgently introduced into mass production.

Antonov returned to the extermination theme in almost 5 years, during one of the difficult periods for the company, when there was no job and financing. At the end of 1952, almost all the modifications of An-2 were already created, and the company, just relocated to Kiev from Novosibirsk, took on any work, including the alteration of foreign vehicles (for example, raising the practical ceiling of the military transport Li-2).

The project of the fighter-interceptor, equipped with the engine AL-7F, was laid wing diamond shape. This wing was developed by TsAGI for supersonic aircraft. It is possible that the use of just such a wing was close to the hearts of the leaders of the main scientific aviation center of the country, which made it possible in January 1953 to obtain a positive conclusion from TsAGI with a recommendation for further development.

Within the framework of this topic, the OKB, together with TsAGI, carried out work to determine the shape of the interceptor. For example, when searching for the optimal parameters of a diamond-shaped wing, at least three options were investigated in the wind tunnel of the institute.

And again, a promising project was influenced by rock: this machine was not included in the pilot construction plan for the 1953 year, and next year the design bureau was loaded with the design of the An-8 aircraft. For the next 40 years, passenger and transport aircraft, and their modifications — more than 100 types — were the main focus of the company's work. The experience of developing fighters at the time was forgotten ...