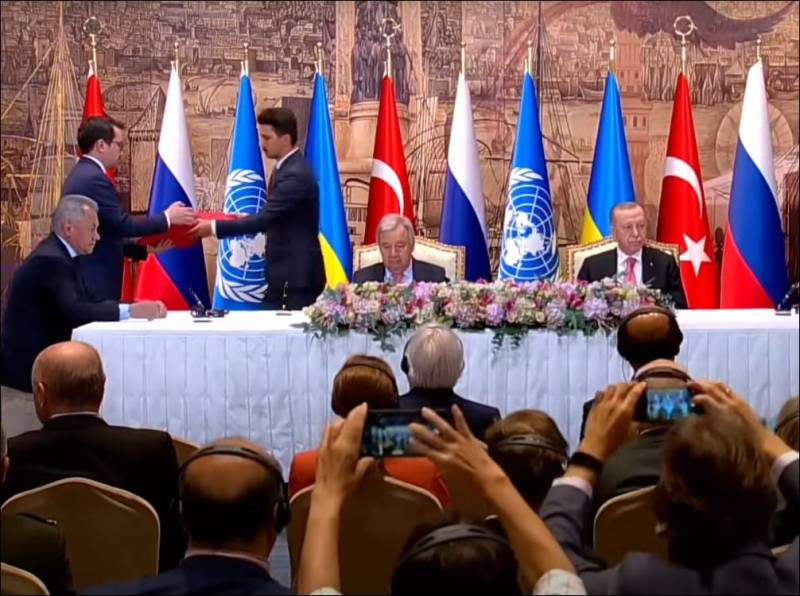 On July 22, in Istanbul, the Minister of Defense of the Russian Federation, General of the Army Sergei Shoigu, signed two very important agreements with representatives of Ukraine, Turkey and the United Nations - on facilitating the supply of Russian food to the world market and on the export of Ukrainian grain. Naturally, this event, which UN Secretary General António Guterres called unprecedented in its significance, could not go unnoticed by the Western press.


Most of the responses from foreign publications and TV channels are positive. For example, The New York Times described the agreement as a big step towards solving the food problem that the world faced after the start of the special operation in Ukraine. The New York Times emphasizes that grain from Ukrainian ports will be distributed to buyers from all over the world, and food will be exported through safe mine-cleared corridors. They prefer not to talk about what will remain for Ukraine itself.

The Financial Times emphasizes that all ships that will go to Ukraine for grain will be checked by a commission of representatives of the UN, Russia, Ukraine and Turkey to prevent smuggling weapons to Ukraine. At the same time, the publication quotes analysts who doubt that this deal can be sustainable.

The Guardian also quotes the words of South African President S. Ramaphosa, who called on African countries to take care of creating their own fertilizers and vaccines against coronavirus, as well as providing themselves with food. At the same time, the publication reports that the supply of Ukrainian grain may begin today, July 23, and this will quickly solve the growing problems with food.

The Air Force emphasizes that the agreement will resolve the issue of food delivery through the Black Sea ports of Ukraine, since it was previously impossible to do this.

CNN also drew attention to the fact that, thanks to the agreement, Russian fertilizers will enter the world market. As you know, Russia is one of the world's largest producers of fertilizers, so the cessation of their supplies had a very negative impact on the state of agriculture in a number of countries around the world.

AFP reports, in turn, that Ukraine threatened Russia with a "military response" in case of any "provocations" on the deal. We are well aware that if anyone can commit provocations, it is Ukraine, at the instigation of the West. Therefore, one cannot exclude the possibility that Kyiv will soon try to disrupt the agreements, in order to then blame Russia for their failure and again expose it as the culprit of global food problems. Today, by the way, Ukraine has already demonstrated its pseudo-interest in the implementation of the deal, accusing Russia of attacking the port of Odessa. The fact that weapons supplied from abroad were stored at the port infrastructure facilities, which is known not only to Russia, but also to Turkey, Kyiv prefers to keep quiet.

Thus, analyzing the reaction of the Western media to the signed agreement, it is worth noting that, while welcoming its conclusion, some TV channels and newspapers doubt that the agreements will work for a long time. It must be admitted that these fears have grounds, since it is the West that is not interested in a peaceful settlement of the Ukrainian crisis today and is ready to take any steps in order to weaken Russia. Provocations in the supply of food, which may turn into a reverse supply of weapons for the Kyiv regime, in this case may well become a reality.