October 13 2012
17
Russian Defense Minister Anatoly Serdyukov said that Russia expects to sign a contract with India for the supply of Su-30MKI fighter jets, while this will be only a small part of what our country is going to deliver to India. Currently, both countries are actively cooperating in the military-technical sphere. Russia, together with India, is working on the creation of an 5 generation aircraft, is developing missiles (BrahMos), and is building large warships for India. To this can be added large deliveries of military equipment for the needs of the ground forces of India, the most striking example is the main battle tank T-90, of which there are even more in India than in the Russian army.

Currently, Russia maintains military-technical relations with more than 80 countries, but India is the main partner of Russia at the present stage of development. This country accounts for about 30% of all Russian exports of weapons and military equipment. From 2000 to 2010, the total amount of military contracts signed by the two countries amounted to about $ 30 billion, which is a very large amount. It is assumed that in the next 10 years, the amount of contracts between the two countries is unlikely to be a smaller amount. Moreover, the emphasis in the military-technical cooperation between Russia and India is not on direct deliveries of military products, but on licensed production and joint development. Such cooperation can include the joint development of the BrahMos supersonic cruise missile, licensed assembly tanks T-90S and Su-30MKI fighters.

Aircraft for the Indian Air Force

Until the end of 2012, our countries can sign a contract to supply India with 42 Su-30MKI fighters belonging to the 4 + generation. Such a statement last Wednesday, October 10, was made by Russian Defense Minister Anatoly Serdyukov, who was at a meeting of the Russian-Indian Interdepartmental Commission on MTC, which was held in New Delhi. According to Serdyukov, the program for the licensed production of these fighters in India is one of the most successful in the field of military-technical cooperation between the two states. 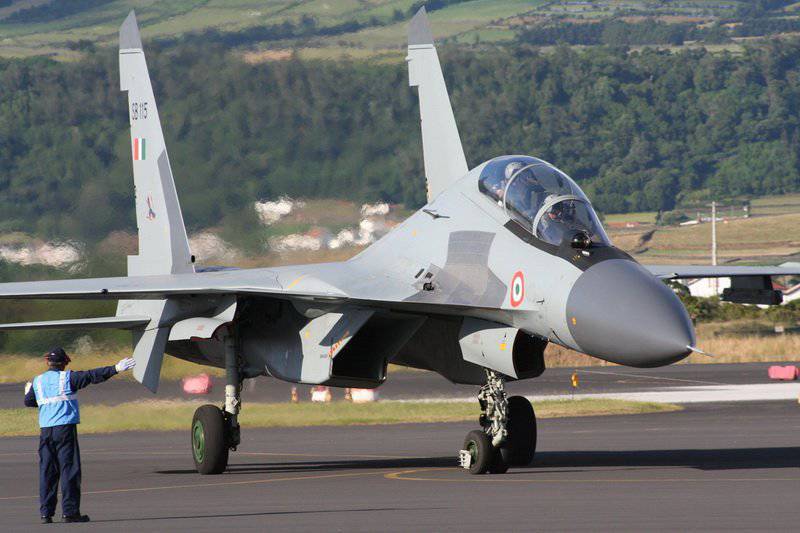 Su-30MKI Indian Air Force
Currently, India is engaged in a serious modernization of its air force. The basis of the fighter aircraft fleet in India at the moment is approximately 130 Su-30MKI fighters, the number of which in the near future is planned to be increased to 270 units, as well as around 70 front-line MiG-29 fighters. In addition, the Indian Air Force has the 51 French Mirage 2000 fighter and about the 200 MiG-21 fighter jets. Of these, about half will be written off over the next 2-3 years, and the rest is planned to be upgraded.

Also, the Indian Air Force plans in the future to acquire up to 200 5 generation fighter jets, the creation of which is being conducted jointly by Russia and India. In addition, India has already managed to hold a competition for the supply of Indian Air Force 126 multi-purpose fighters totaling $ 10 billion. The winner of this tender was the French fighter Dassault Rafale. Meanwhile, the Indian defense website Defenceworld.net, which refers to unnamed Indian military sources, says that the contract for the supply of India 40 fighters Su-30МКИ can be signed in November 2012 of the year. According to the resource information, the cost of this transaction will be 3,77 billion dollars. And the beginning of the execution of the contract comes in 2014-2015 year. At the same time, according to the Russian agency Interfax, the contract for Su-30MKI fighters will not be deliverable, but licensed.

Also, according to the information of Indian media, the 5 generation fighter aircraft of the Indian Air Force should start coming to the 2022 year. India and Russia are close to signing the main contract with a total value of 11 billion dollars for the implementation of the main stage of the project - development and research, said Commander-in-Chief of the country's Air Force Marshal Norman Anil Kumar Brownie. According to the commander in chief, the first prototype of the FGFA (this is the name of the Indian 5 fighter generation) will have to arrive in the country by the 2014 year to undergo intensive tests at the military base in Kihar.

In turn, Russian Defense Minister Anatoly Serdyukov, October 10, announced that the 5 generation fighter jets will become serial in the 2020 year. Before they get to India, the machines will have to pass a series of tests. The fighter is new, the newest technologies are implemented in it, for this reason the cycle of its tests both strategic and flight will be quite long, says Igor Korotchenko, director of the World Trade Analysis Center weapons (TSAMTO). 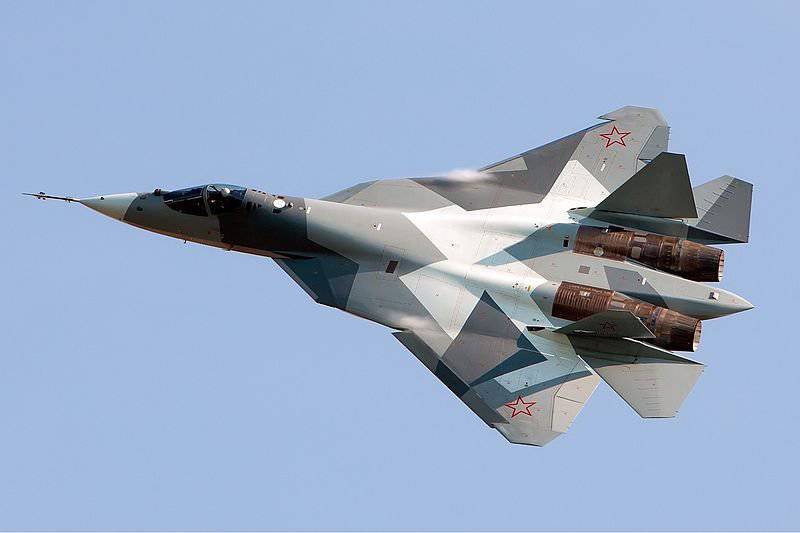 PAK FA based on it will be created fighter FGFA
At the same time, the Russian expert emphasizes that the Russian production cycle of the 5 generation is fully consistent with the launch of mass production of a similar American F-22 fighter. According to the expert, Serdyukov announced the timing of the already full-scale serial production of the new fighter. At the same time, before that, it will be produced in small installation batches, which will be tested in the Russian army. To conduct these tests will take several years. Before 2030, India intends to purchase 214 fighter jets of the 5 generation, and the total value of this deal will exceed 30 billion dollars.

Another successful example of international cooperation is the BrahMos project. The Russian-Indian joint venture BrahMos was established in 1998. It got its name in honor of the rivers Brahmaputra and Moscow. The main project of the new enterprise was the supersonic cruise missile, which received the same name. Its first launch took place on 12 June 2001, when the rocket was launched from a coastal launcher. In 2009, the rocket was adopted by the Indian Navy.

By joint efforts of the two states, the rocket has now been adopted by the Indian Army and its large-scale production has begun. At present, this rocket is being adapted for use from an air carrier. The total volume of missiles supplied for the needs of the Indian Armed Forces is estimated at approximately 1000 units. 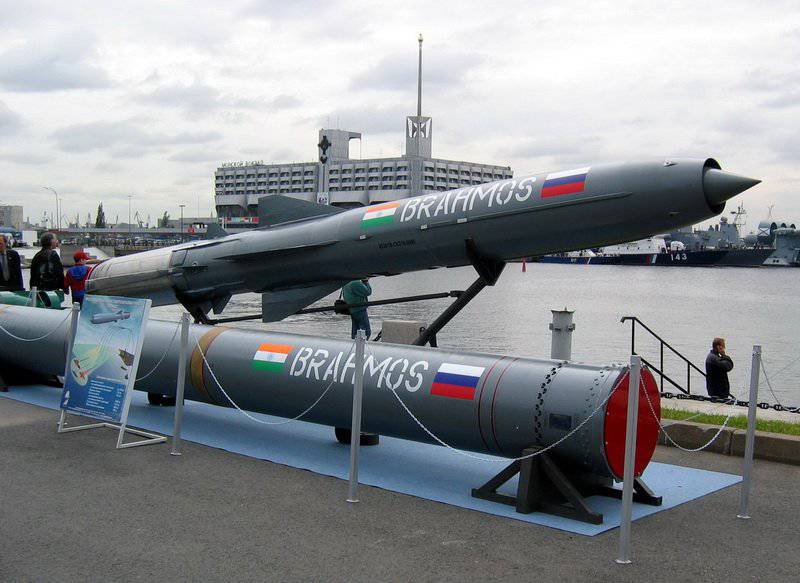 The “BrahMos” rocket was created on the basis of the Russian P-800 “Onyx” rocket (the export name is “Yakhont”), which was created in the “NPO Mashinostroyenia” in the 1980s. New cruise missile "BrahMos" is capable of speeds from 2,5 to 2,8 Mach numbers. The rocket is designed to hit a wide range of naval targets and is characterized by a fairly long range - up to 300 km. when using the combined flight mode and up to 120 km. when flying at low altitude. At the same time, the "BrahMos" is distinguished by a powerful combat load - 250 kg., As well as low visibility for enemy radar.

The flight of a cruise missile, the starting weight of which in the base version is 3 tons, is carried out in the height range from 10 meters to 15 000 meters along a variable trajectory. In the “BrahMos” rocket, the principle of “fired and forgotten” was implemented in practice; the rocket itself can find the target. According to experts, this unique cruise missile, which would have such speed and range in the world at the moment simply does not exist. At the same time, the cruise missile can be launched from ships, submarines, coastal launchers, as well as from aircraft, for example, those already mentioned above - Su-30MKI. Currently produced in 2-x versions: a version of the sea-based version and for the ground forces.

The Russian Minister of Defense did not pass over the issue of transferring India the heavy aircraft-carrying cruiser Vikramaditya (former TAKR Admiral Gorshkov), which should be part of the Indian fleet in the 4th quarter of next year. Currently, in Severodvinsk, at the Sevmash enterprise, it is planned by the summer of 2013 to eliminate all identified shortcomings and put the ship into the sea for testing. According to Anatoly Serdyukov, at present, a fairly large volume of tests has already been carried out on the aircraft carrier. Almost completely managed to test the aircraft’s aircraft, dozens of take-offs and landings of helicopters and airplanes from its deck, the minister said. Basis aviation the group of this ship should be Russian MiG-29K fighters.

Aircraft carrier "Vikramaditya"
At the same time, Anatoly Serdyukov acknowledged the fact that during the tests in the Barents and the White Sea on the ship the deficiencies in the operation of the boilers were revealed. In turn, Indian Minister of Defense Arakaparambil Kurian Anthony noted that the most important issue for the two countries remains the earliest transfer of the ship from Russia to India. The contract for the modernization of the Admiral of the Fleet of the Soviet Union Gashko TAKR was concluded by India back in 2004. The ship should have been handed over to the customer back in 2008, but due to the increase in the volume and cost of work, the deadlines were shifted. To date, the cost of this transaction, according to unofficial information, is about 2,3 billion dollars.

While India is waiting for the aircraft carrier Vikramadityu from Russia, it is receiving Russian frigates. In June 2012, the first of the three Indian-ordered frigates, which was built at Russian shipyards, arrived in the Indian port of Mumbai. The second frigate is scheduled to be transferred in November 2012 of the year, and the third - in 2013 year, Anatoly Serdyukov told reporters. In total, India has ordered in our country a consignment of 6 frigates from the 11356 project, four ships of this series, including the Teg frigate transferred in June, have already been delivered to the customer by the Russian side.

The Minister of Defense of Russia called the adoption by the Indian Navy of the multi-purpose nuclear submarine Chakra, which was leased by Russia for a period of 2012 years, a landmark event of 10. The amount of this transaction is estimated at 900 million dollars. Its design was the result of long-term teamwork and an example of a mutually beneficial partnership between the two countries, the Russian minister said.